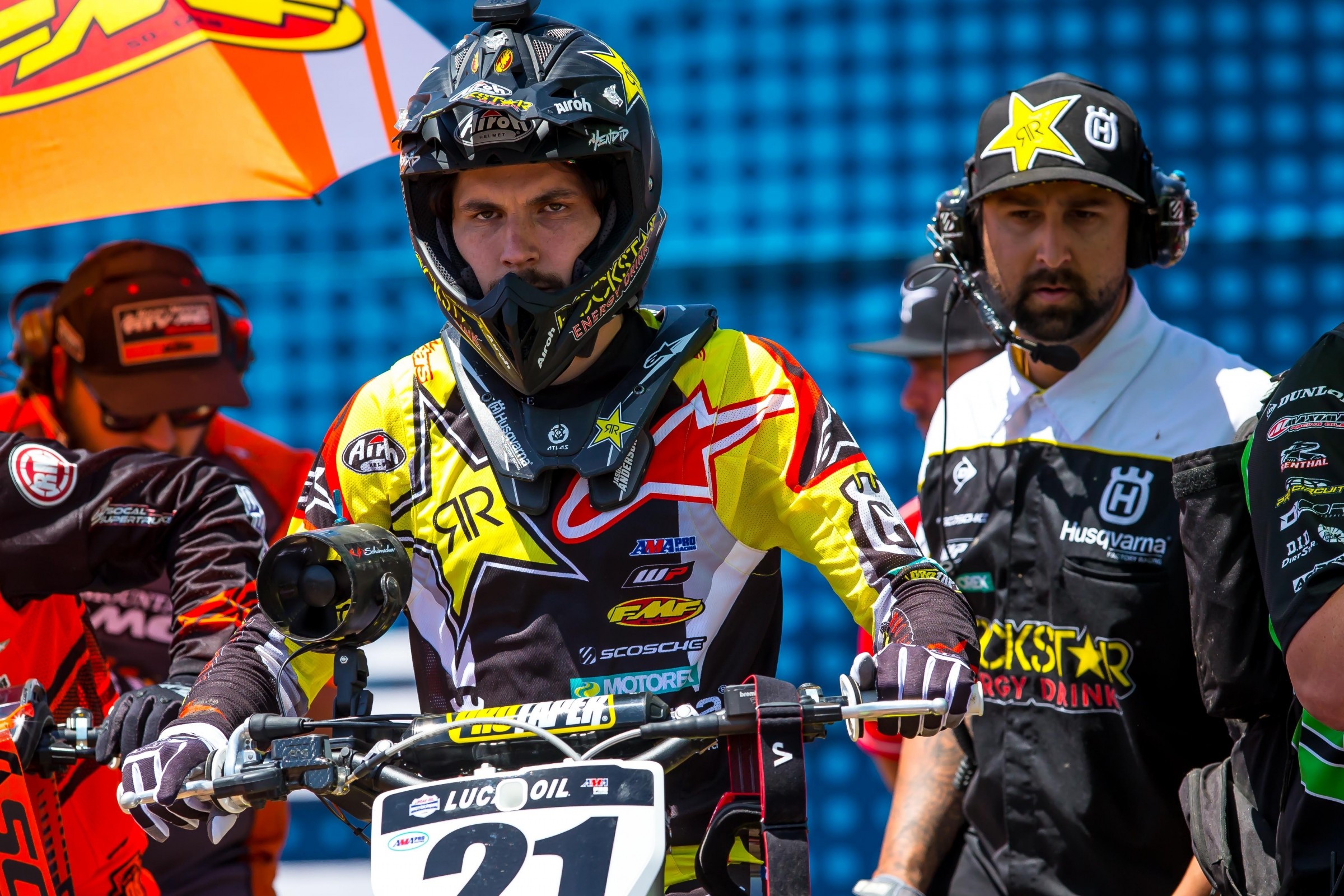 After Jason Anderson recovered from surgery, he fired off a text apologizing to his Rockstar Energy Husqvarna team manager, Bobby Hewitt. Jason said he was ready to work his ass off this summer and was sorry it had just come to an end.

The injury wasn’t really his fault, but the text does indicate that Anderson--despite some fears that he'd suffer through a supercross hangover all summer--was ready to contend outdoors. Unfortunately, Anderson’s 2018 motocross campaign is now on hiatus after a practice-day incident at Glen Helen last Thursday. A rider launched the wall jump before the finish line and landed very hard. He was injured, so someone immediately ran to the top of the wall jump to motion riders to go around it and avoid hitting him on the backside. One rider went around the wall jump and realized the downed rider was his friend. He hung a quick left to go over and check on him… not realizing Anderson was right behind him. They collided and Anderson went flipping over the bars, his foot landing right on a footpeg. The result was compound fractures to several bones on the outside of his right foot. The X-rays looked pretty gruesome, as did the bloody photos Anderson posted on social media.

Anderson underwent surgery while his Rockstar Energy Husqvarna team was headed to Thunder Valley. It went well, and now the recovery process begins, starting with at least four weeks without putting weight on his right side. After that, he will be cleared to train and eventually to ride. Anderson hopes to be back by Unadilla, which is about ten weeks out. Honestly, most riders of top status who aren’t racing for a contract the next season don’t even bother to come back before the end of the year. Why race back into shape and take a beating?

Because Anderson really, really, really wants to be part of Team USA at the Motocross of Nations this year. He already told Hewitt that he’s willing to do whatever it takes to be on the team.

In the pre-season run up to Lucas Oil Pro Motocross, many wondered if Anderson’s new Monster Energy Supercross title would ruin his focus and motivation for the outdoor grind. He fully admitted he put motocross testing aside to make sure he locked down the supercross title.

“It’s kind of like a group decision, but Aldon [Baker, trainer] was not pumped on me just wanting to ride supercross,” Anderson said after his podium finish at round two. “He wanted me to be ready for outdoors. At the same time, I was in a position that I have never been in and I wanted to really focus on getting that one goal accomplished. So I rode supercross, and honestly, the biggest push was my mechanic. My mechanic really wanted me to just ride supercross. I put my trust in him all the time. Between me and him, we just kind of told Aldon we want to just ride supercross and be ready to go and get this thing done. Then come outdoors, we’ll deal with that problem when it gets here. I feel like we’ve done a pretty good turnaround. We’re behind in points right now, but at the same time, I feel like if I keep getting good starts and I keep riding really good, we have a good shot at battling for wins like we did today and really getting onto that overall podium, getting that first win.”

Anderson said he had only ridden outdoors five times before the Hangtown opener, which included the Hangtown press day. His endurance and bike setup were lagging at the opening races, but he says he was fully committed to working out the kinks and getting in the thick of the fight. Of course, all riders will at least say that, but Anderson has special motivation this summer because of his Nations desires.

“He wants to be on that team so bad,” Hewitt told me. “Like, so bad. That was one of his main goals this season. From day one, he wanted to be selected to the team.”

Before Hangtown, Anderson said that even if he doesn’t make Team USA, he’s going to go to the race just to watch. He’s all in on MXoN taking place in the U.S. at RedBud. So that’s where his focus is—trying to recover in time to be considered for the team, and also to be ready in case his number does get called.

It’s complicated because the squad is often actually announced at Unadilla itself (James Stewart once returned to racing at Unadilla hoping to maybe get a MXoN bid, but the team was announced during opening ceremonies that day—without Stewart on it—just minutes before Stewart actually took off for a moto). Anderson has asked Hewitt to tell Roger DeCoster to keep him in mind. He’s willing to run through a wall to be on Team USA this year.

With the race taking place at RedBud, though, expect no shortage of willing candidates. That’s a nice contrast to the last few years, when Team USA had to be assembled from the few willing participants instead of a selection from a large pool of riders. Anderson was once the benefactor of this, as he was selected to Team USA in 2016 while he was still out with a broken collarbone. He returned to race the season finale in Indiana to get his racing legs back under him.

To look at things logically right now, Eli Tomac would be the lead 450 dog, and Justin Barcia and Blake Baggett look like fine candidates for another 450 slot. Things can change quickly, though, which Anderson knows all too well. Not only was this foot injury the result of unexpected circumstances, but so was the bump that knocked him out of the Nations in 2016. If you can get landed on while celebrating a moto win, well, anything can happen.

In fact, Hewitt thinks there could be a silver lining to all of this. When Anderson returns in August, he’ll be fresh and ready to moto down from then on through RedBud’s MXoN October 6-7 weekend. Those who logged a full season without a break might not feel that way.

Anderson has made his feelings known. He wants to be on the team. Can he recover and will he be selected? Stranger things have happened. Just ask him.