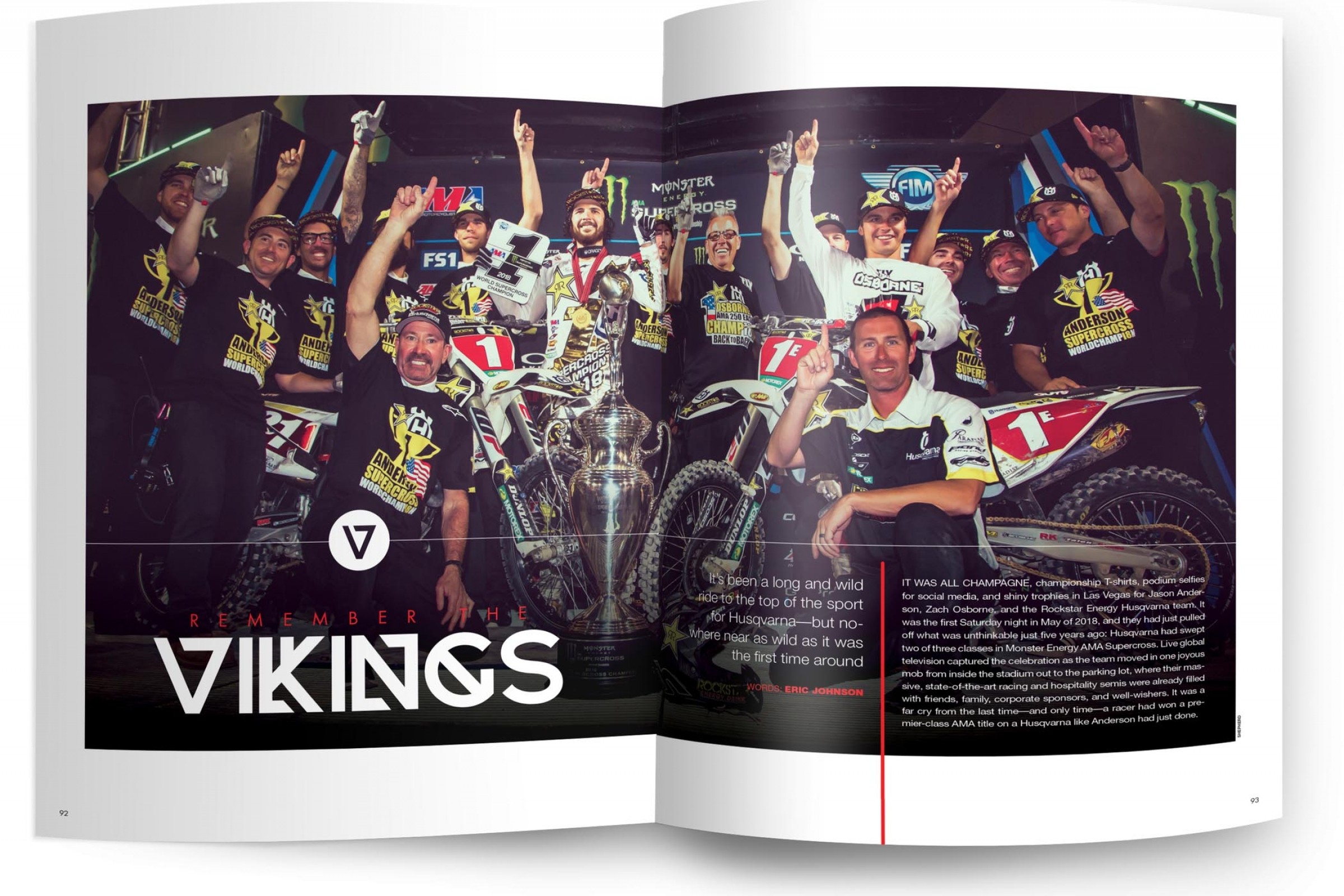 In the Mag, Remember the Vikings

In May 1998, I flew across the Atlantic Ocean to attend an FIM Motocross World Championship Grand Prix for the first time. The venue was the fabled Foxhills circuit, a track etched out of a chalk pit some six miles south of Swindon, England. I had attended a few USGP events in America, but had never put footprints on a classic GP track in the old world of motocross.

On the Saturday afternoon of the race weekend, a few French journalists had arranged for me to sit and interview Alessio Chiodi. The reigning 125cc World Champion and diminutive Italian now raced with Husqvarna and was well on his way to what would be his second straight eight-liter FIM Gold Medal. I was completely enamored of Chiodi, as he personified everything old-school Motocross World Championship to me—as did the motorcycle he raced. Chiodi and the team, managed by former 125cc GP standout Corrado Maddii, exceled that day, with Alessio sweeping both motos before a crowd surpassing 40,000 spectators.

As the history books and websites point out, in 1918, Husqvarna began producing machines built entirely in-house in Sweden. The company then went racing, and by the sixties, the marque’s lightweight two-stroke motocross bikes ruled the FIM Motocross World Championship. The brand collectively won upward of 14 world titles in the 250cc and 500cc classes. Then came the ascent of the Japanese motorcycle-makers in the mid-seventies, and to a large extent, the sun set over Husqvarna motocross world domination.

However, before it all faded into obscurity for what would be decades, in 1976, Husqvarna had one year of greatness in the United States, largely to the determination, dedication, and straight-up creativity displayed by racer Kent Howerton and mechanic Eric Crippa.

And that’s why this “Remember the Vikings” story came to life.

“Hey, Anderson is likely going to clinch the supercross title tonight and I have a story idea for you,” Davey Coombs said on the phone to me. I was standing in the grassy pit area at the season-ending Las Vegas Supercross on Saturday morning and looking for something to do, and DC had found something for me. “Why don’t you seek out guys like Kent Howerton, Eric Crippa, and a few others and see just what it took to win that title in ’76?”

And with my marching orders, I was off. The first gentleman I got ahold of was Gunnar Lindstrom. Hailing from Sweden, in the late sixties and into the seventies, Lindstrom waved a heavy hand over all things Husqvarna motocross in America. And although Lindstrom would ultimately make a name for himself with Honda in the late seventies, his heart still beat proudly for Husqvarna. When I phoned him, Lindstrom laid out everything—good, bad and ugly—Husqvarna had going both in AMA and FIM motocross in 1976. As expected, and not to be let down, the entire global program that season was a bizarre and myopic mix of arrogance, hubris, and overconfidence. Taking it all in, it made the “Remember the Vikings” story even more outlandish.

Davey and I also reached out to Jim Gianatsis, who during the seventies was the preeminent moto journalist and photographer in the sport. Jim also worked as a PR staff member for Husqvarna that year, and whether they were reflections, anecdotes or even the amazing photos he snapped of Howerton and the #3 that summer, he contributed mightily to the overall story.

I tracked down Eric Crippa in Canoga Park, California. Sounding like I had woken him up out of a nap, it took Crippa a few minutes to get rolling, but when he did, he was just awesome. To be honest, I believe it was Crippa who won the championship for Husqvarna that year. What he had to keep the bike not only running (no mean feat!), but to keep the effort out on the road and not in a ditch or in a junkyard was simply astonishing. The proactivity, creativity, and straight-up ingenuity Eric displayed in the ’76 AMA 500cc National Championship was phenomenal, and hell, Husqvarna even gave him a toolbox with his name on it after the title was clinched.

Finally, I was able to catch up with Kent Howerton himself. Even today, Howerton is still surprised about what both he and Crippa had to go through to get from race to race that season. Still living in Texas, Howerton vividly reflected on each and every moto run that summer, right up to the final drop of the gate during that steamy and dramatic afternoon in New Orleans, Louisiana. Mentioning it a few times throughout the course of the conversation, Howerton still believes it was youthful innocence and being straight-up naive at times that kept him and Crippa in the championship.

It was a real pleasure being able to piece the “Remember the Vikings” feature together. While I was doing so, I came across the October 5, 1976 issue of Cycle News.

"Trans-Am round one. The Rhinestone Cowboy lassoes another big one."

With race coverage written and shot by Jim Gianatsis, the opening read:

“Cold rain, darkened skies and ankle-deep mud hardly seemed a deterrent to thousands of spectators crammed up against the snow fence for the Valvoline-sponsored opening round of the 1976 Trans-AMA race series at Mid-Ohio Motocross Park.”

I was in the mud and along the snow fence with my dad that dreary day in September 1976 when new AMA 500cc National Champion Kent Howerton won the Trans-Am opener at Mid-Ohio, just as I was on the side of a chalky hillside amongst the din of air horns at Foxhills in England some 22 years later when Alessio Chiodi triumphed for Husqvarna. All this withstanding, it was pretty damn impressive to watch Jason Anderson clinch the 2018 Monster Energy Supercross Championship at Sam Boyd Stadium in Las Vegas. That’s a hell of a lot of history over the span of nearly five decades, but hey, isn’t it awesome when history repeats itself?