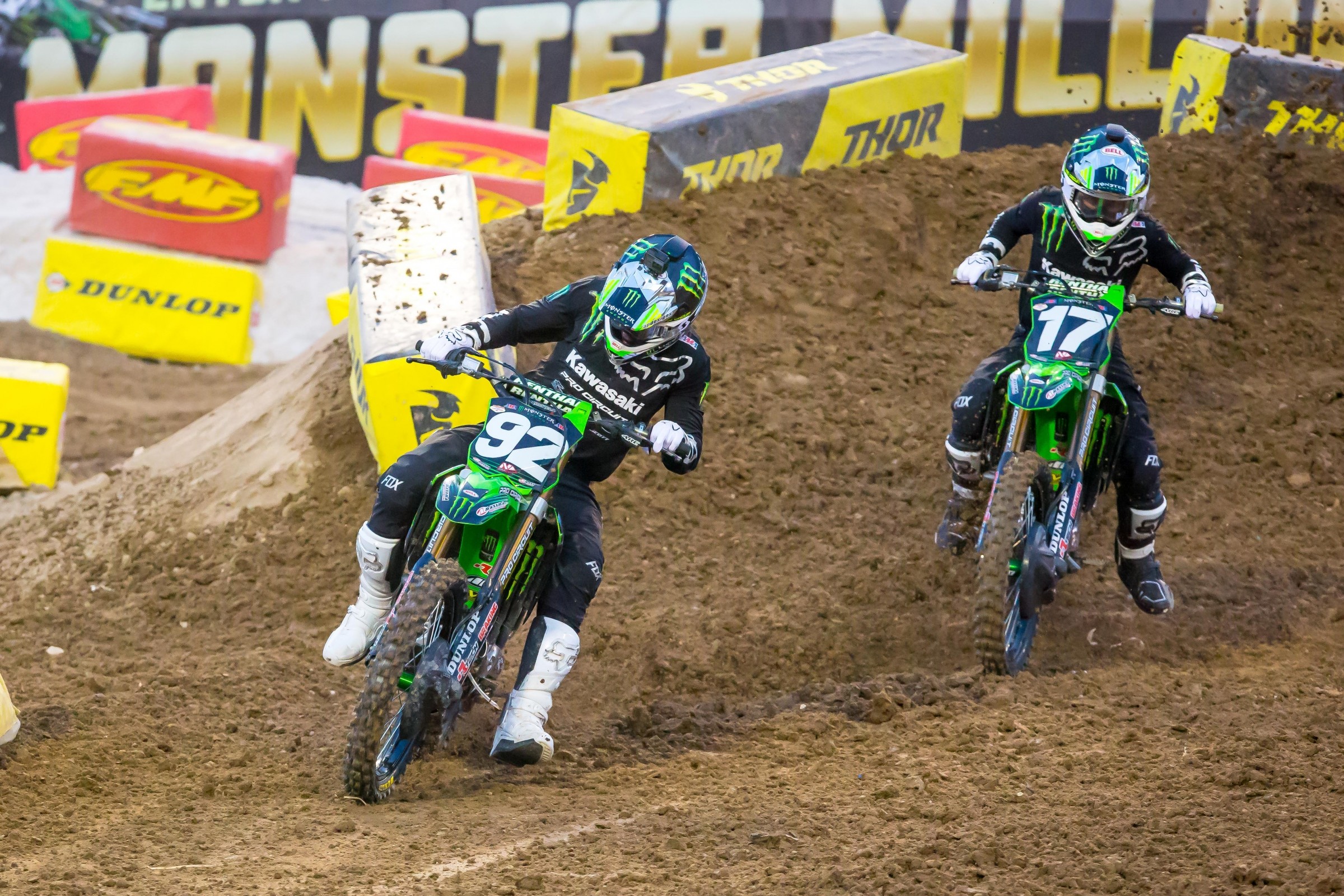 "There are so many reasons to love Las Vegas, both on and off the track. Having three championships at stake is just icing on the cake," Jason Thomas wrote in last week's Staging Area before the final round of Monster Energy Supercross got underway. Now that championships have been won, champagne has been popped, and riders' focus has turned to the quickly approaching outdoor season, the veteran of 15-plus years of pro supercross racing grabbed some photos from round 17 to explain how things went.

Jason Anderson won his first 450SX Monster Energy AMA Supercross Championship title on Saturday night. Las Vegas’ slippery dirt forces riders to use every trick in their arsenal to keep themselves moving forward. As you can see in the photo below, many times riders are forced to go all the way to the outside of the track to find traction. Many would call this line “the cushion.” All of the loose dirt from the middle of the track has been swept and pushed to the outside, forming a berm against the Tuff Blox.

Anderson is using this cushion as a pivot point, using the berm to accelerate hard back across the track. Notice on the inside how shiny and hard-packed the surface is. Turning across that inside is possible, but riders have to tiptoe through instead of being aggressive like Jason is here. Line choice in this situation can also vary from rider to rider. Marvin Musquin, for example, would be much more inclined to carefully hug the inside. He would take advantage of the shorter distance required to cover, but this requires elite throttle control, and Musquin is the master.

Similar to the situation above, Christian Craig is attempting to turn out of a small berm and cut back across the slippery Vegas surface in this photo. As his front wheel is leaving the safe confines of the berm, it is “pushing” as it struggles to find traction. That front tire push is notorious for Vegas soil. Knowing that he is fighting for traction, Christian has his inside leg at the ready to stabilize any outward slide. His inside leg will act as a rudder and is really the only defense he has against a low side crash in this moment.

This photo below is from the heat race battle between Adam Cianciarulo (#92) and Joey Savatgy (#17). This turn is just after the triple as riders made a slippery left-hand turn. There were two approaches to this turn all day and night. Adam’s line cut across the inside of the turn and forced riders to slide to that shiny, slippery surface on the outside. He is anticipating a lot of wheel spin and is in full flat track mode. He has his inside leg out to stabilize him and protect against the bike stepping out. He is also working to center his weight, but this is a tricky turn. He wants to keep his butt forward and near the gas cap in order to give the front tire the needed traction. Knowing he also needs to help weight the rear tire as it spins up at 12,000 RPM, he is leaning back with his torso, forcing that rear tire into the dirt. It’s an impossible task, applying weight to the front and rear simultaneously, but these riders are experts in finding the happy medium.

For Joey, he opted to use the outside berm. He would have landed on the right side of the triple landing and pivoted hard off of the soft dirt in the background. With the added traction, he is able to accelerate fearlessly, and his body language reflects that. He is leaning forward to fight any wheelie as he feeds the clutch. In theory, while Adam is slipping and sliding through the outside and ends up next to that Suzuki Tuff Block, Joey could accelerate across the inside and beat him to the next left-hand 90 degree turn. Adam’s executing his line too well this time around, but I saw this work in many cases. Joey’s line would require aggression, as the inside rider has to force the issue when they meet in the next left. On a track that didn’t have a lot of obstacle separation, lines like this were critical.

The photo below shows Musquin entering Sam Boyd Stadium after Monster Alley. Most riders were using the outside berm to pivot (notice it on the far side of the track). This turn led into a short straightaway, then a 90-degree right-hand turn into the whoops. This section was a perfect example of the differences between Eli Tomac’s riding style and Marvin Musquin’s.

Eli’s modus operandi is blazing aggression and berm annihilation. In this example, Eli was using that outside berm, pivoting hard and then accelerating violently to the next outside berm before the whoops. He was carrying much more speed than Marvin, but he was also covering much more distance in these two turns. Eli is more comfortable riding the cushion and using aggression and high RPM. He rails around the outsides with reckless abandon. The corner after the whoops was a perfect example of this. Eli was absolutely pinned around the outside berm while his counterpart Musquin was trailing efficiently through the low, inside line.

Marvin is the polar opposite of Eli’s hammer throttle mentality. Marvin’s strength lies in finding traction where none seems to exist. He makes inside lines work that others simply can’t. This is nothing new for French riders. Jean-Michel Bayle was the absolute king of this in his day. The rocky, slippery French tracks (especially in southern France) force this level of expertise. Marvin is using that experience in this photo, as he is opting to turn early across the hard inside surface. When he pivots, he will then be set up to enter the next right-hand turn at the optimum angle (the far left side of the track). He can then cut across the inside before the whoops and carry momentum into his chosen line. This is typical road race line selection—outside to inside cornering. There is simply no one in moto who does this better than Marvin.

There is no definitive answer as to which method is better. It can vary from track to track. Sometimes Eli’s aggression leads to spectacular crashes while Marvin glides away from everyone (MEC 2017). Other times, it leads to 20-second leads when Marvin simply can’t match the pace (St. Louis 2018). The approach is wildly different, but both can be lethal in their own unique ways.