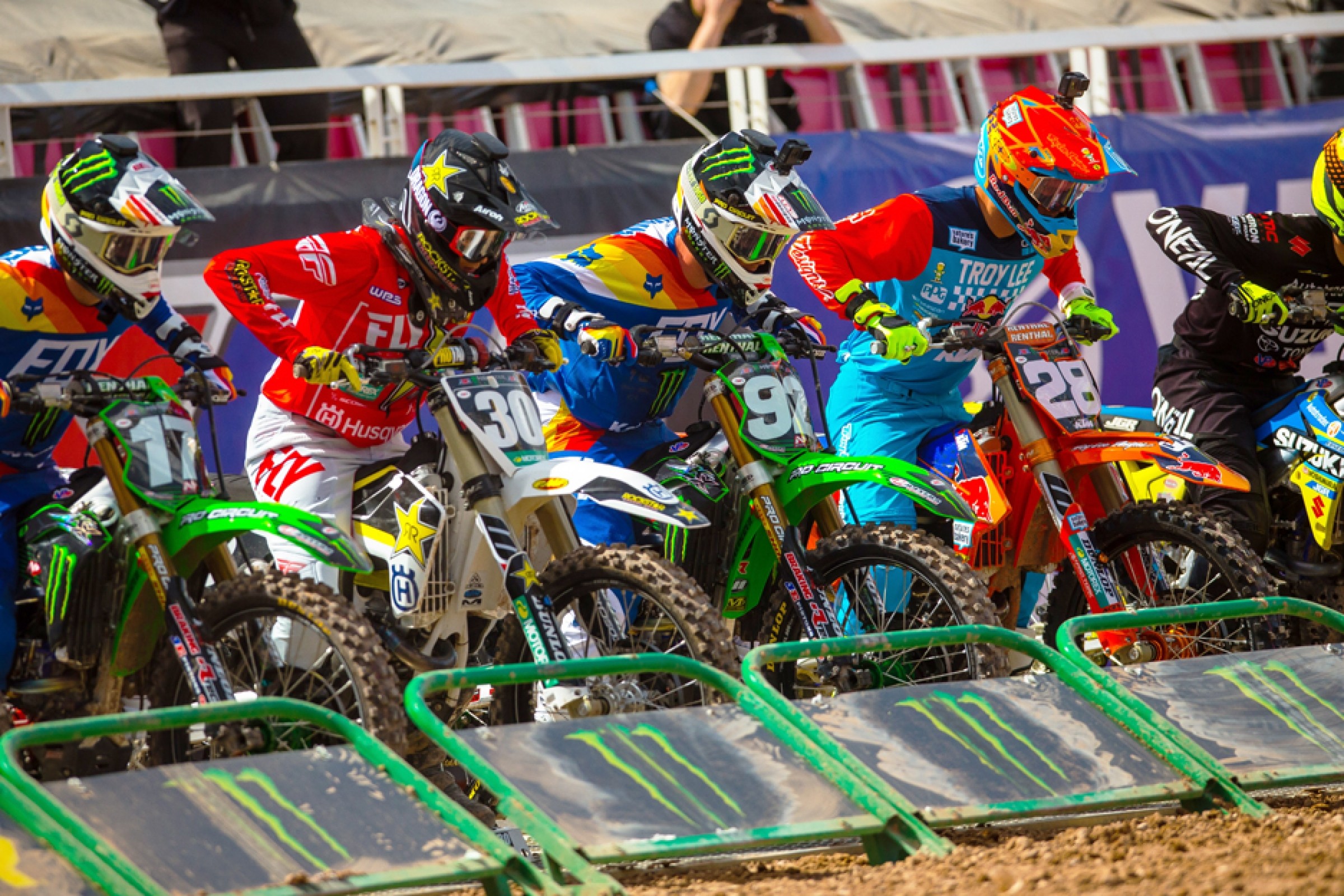 Vegas, baby! My favorite round of the series. It’s the last race of the Monster Energy AMA Supercross Championship, which ends a long stretch of continuous racing weekends. Championships are handed out, and that will mean some tension-filled main events (nothing will ever compare to 2017, methinks). Vegas also marks the beginning of summer for many. For those who live in the northern part of the country, the weather is still shaking off the cobwebs. The sunny Vegas skies are a welcome change and feels like a changing of the guard. There are so many reasons to love Las Vegas both on and off the track. Having three championships at stake is just icing on the cake.

The track this year is going to be fast and furious. With a more “open” layout and more fast, easy sections than I can ever remember, look for a very aggressive approach. There won’t be much to separate the pack unless the whoops are built to intimidate. The start will be critically important and block passes will rule the day. Vegas drama, indeed.

The start is the longest we have seen since Glendale. It spans the entire length of Sam Boyd Stadium, which means high speeds, but the designers did a great job of opening up the first corner and giving everyone room to maneuver. I’ve often said it in this very column, but longer starts and spacious 180 first turns, even with increased speeds, are the safest variation.

Coming out of the first turn, riders will accelerate hard into another straightaway before launching into the sand. I do mean launch, too, as the ski jump will send them deep into sand rollers and it will be a who’s who for the furthest landing roller. Jumping three, four, or five deep will be something to watch all day and night, especially in timed qualifying. That sand leads into the fast outer section, a signature of Las Vegas events. A tabletop in the back section slows riders before they come screaming back into the stadium. Instead of the long straightaway leading all the way to the end of the stadium—which claimed Jordon Smith last year—riders will make a hard left and cut across the mechanics’ area.

Things get real after a quick right-hand turn. The only whoops section on the track is set immediately out of the 90-degree right. Traction will be at a premium as riders accelerate for the whoops, and look for this to be a primetime passing zone. If Marvin can’t find a jump rhythm, this could be a vulnerable spot on the track (he DNF’d last year’s event after crashing in the whoops). There is a basic on-off after the whoops, but some could go for the quad if it’s built accordingly.

A tight bowl berm sets up another on-off before a standard supercross triple. Look for riders to set up over this triple, landing on the right side of the track and sweeping through the following 90-degree left. Opening up that turn will allow for the most momentum, and on Vegas’ slippery surface, momentum is critical. After cutting back across the start, another 90-degree left leads into the longest rhythm section of the course. The first jump has an inside/outside option, which will change the rhythm all the way to the corner. The outside allows for a 3-3 and table-to-single. The inside is either 2-3 and on-off, or riders can roll the first and then adopt the same rhythm as the outside line.

Another bowl berm (look for nets here) sets up the finish line jump, and then an easy double-double. A slick 180 slingshots riders back down the start straight and onto lap two.

Will we see drama in one of the three title chases?

Does Eli take his swing at Marvin?

Will Joey take a shot at Zacho if the opportunity arises?

With an easy track layout, how will the whoops be built?

Marvin Musquin has won two races in a row, and while he’s not exactly a fan favorite right now, his riding is on point.

Shane McElrath worked his way through the pack to win last Saturday in Salt Lake. His Indy snafu ruined his title hopes, but a win this weekend would go a long way toward his 2019 plans.

Blake Baggett is back on form with a 4-3 in his last two outings. He is eagerly anticipating a reset in the outdoor series, but look for a strong Vegas ride on an easy track that favors good starts.

Zach Osborne and Jeremy Martin both are riding waves of momentum. Zacho will most likely be a bit reserved this weekend, but look for J-Mart to go for another win.

Joey Savatgy hasn’t been bad, per se, but he’s in danger of falling to fourth in the points chase if things don’t go well this weekend.

Justin Hill had a tough SLC. He has been all over the map this year.

Mitchell Harrison seemed to crash every time I noticed him in Utah. He rode really well last year in Vegas, so maybe he can bounce back.

Chad Reed sets the all-time start record in the premier class at 236.

Marvin Musquin holeshots and wins the main event, making the most of an easy layout and slippery conditions.

Chaos reigns in the 250SX East/West Showdown. There are 911 distress calls made for ambulances, Las Vegas PD, a hazmat squad, Ghostbusters, The Avengers, a sherpa, Mother Theresa, and one frantic request for Kermit D. Frog.

Weston Peick takes out several riders on his way to another top-five finish. When asked about his race, he mumbles something about Sparta and breaks the interviewer’s microphone.