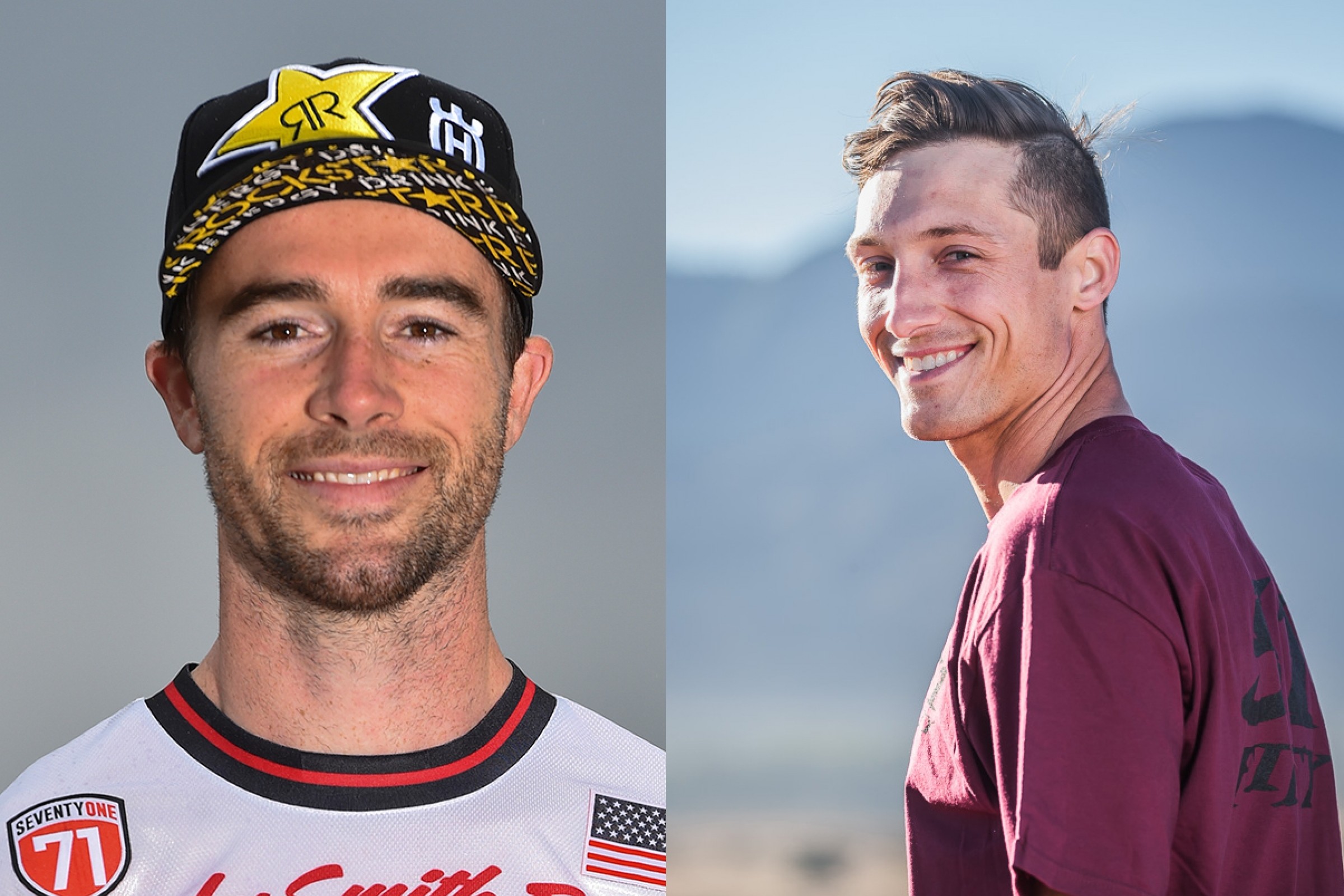 3 on 3 Questions for Las Vegas

We brought in two riders who have raced Las Vegas in the past to answer our questions about the final round of Monster Energy Supercross: 51Fifty Energy Drink Yamaha’s Kyle Chisholm, who placed 16th in 250SX at the track last year; and Ryan Sipes, who won the Las Vegas 250SX Lites Shootout in in 2011.

1. How different is the Vegas track compared to other supercross races?

Ryan Sipes: The Vegas track can be a lot different than a normal supercross. For one, it's the only stadium where you go outside and back in. The speeds out there in that sweeper are a lot higher than a normal SX, and it adds an additional passing opportunity for the guys. I always had a lot of fun flat-tracking around that section, working the angles and trying to carry more speed than the other guys. Do you use the tiny powder berms or power-slide around the inside? Most of the time, it just depends on how much roost you want to eat. (The roost there is the worst. Imagine playing paintball with tiny steel porcupines. You get the idea.)

The other difference is the composition of the dirt. Las Vegas is basically in the desert, and that's what they build the track out of. To combat it drying out so fast, they usually start practice with it pretty muddy. But no matter how diligent they are with watering, by the main events, it's as dry as a popcorn fart. So the riders have to deal with two different ends of the spectrum as far as track conditions and traction go. And understanding that moisture holds dirt together, the extreme lack of it causes the whoops to get really square-edged, and the insides of the corners start to resemble polished glass. Usually good "technical" riders are better in Vegas than the "hold it wide open, it'll buff out" type of guys. Take, for example, 2011, where a really handsome technical rider from Kentucky beat a young rev limiter-bashing punk from New York. (Just kidding, Justin Barcia. You weren't that young.)

Chisholm: The Vegas track is definitely a bit different. To start, the big sweeper that they have had for quite a few years now really lets us open it up and get some speed going. And the exit out of the stadium and entrance into the stadium is very high speed even compared to some outdoor tracks, let alone a supercross track. Last year, for example, they had the usual Vegas ski jump coming back into the stadium, but they also put some sand rollers after it. Some of us were quadding off the ski jump, and it was everything I had on my 250 in fifth gear! That’s how fast we were coming into the stadium.

The track, to me, usually seems to be more open and faster than most SX tracks. It has a more outdoorsy supercross feel a lot of times. The dirt is, of course, a little bit harder pack. Since it’s May and it’s usually pretty warm outside, they typically have to water the track a lot to keep moisture in it. This makes it go from muddy to good, to dry slick, to wet slick, and then they prep the whole thing for the night show and it’s back to muddy and greasy, but then dry again by main event time. It’s a very challenging part on its own, and the whoops are especially difficult in all of those conditions.

2. Even though there's a fear of injury, riders in the points lead usually still ride the week before Vegas. What would it be like if you just didn't ride all week? Would you feel rusty or strange?

Sipes: Personally, I like to ride a lot during the week just to keep myself sharp and have some fun. Not everyone is that way. I knew guys I used to race against that only rode once a week because that's what worked for them. But here's the thing: These guys have the points lead for a reason. They've made it this far preparing a certain way. Why change it now? I know that's easy to say and probably hard to do, considering the risks these guys take every single time they ride, but that's how you have to treat this situation. Maybe they don't do the biggest, gnarliest rhythm section at the test track this week, but they are still riding. Remember when every rider who ever had the points lead said on the podium, "I'm gonna take it one race at a time”? That's what they will continue to do if they are smart. Changing up their routine at this point would only hurt them.

Chisholm: I feel like the guys in the points lead obviously have a lot to lose, but at the same time, you can’t crawl into the corner and be scared and just try to not get hurt. That’s when it usually bites you. I believe they need to do their normal training schedule and treat it as another race, while at the same time keeping it in the back of their mind to make sure they’re extra mentally sharp at all times. Just really stay focused and in the moment. If they did take the week off, I really don’t think at this point in the season it would be a huge difference.

For me, I usually do feel just a tad bit rusty and not quite as sharp with the timing and intensity you need for supercross. So it’s definitely not ideal to take the week off, but being the last week, I don’t think it’d be a big deal. Now, if you did that several weeks in a row, that’s when you start to lose that edge and confidence and progression that you build all season long. I bet every rider feels more comfortable and confident racing now than they did at A1, even after all that off-season prep. Sometimes it can actually do some good to take a week off and make yourself feel really fresh and excited to ride. Every rider is different. These guys will have to trust what is best for them.

3. How hard would it be to manage your emotions and get back on the track like Anderson had to do in SLC? Can you make mistakes if you get too mad or emotional?

Sipes: That had to be tough. It's a really stressful situation when you are literally watching your points lead dwindle. The worst thing he could have done was to ride emotionally, either mad or otherwise. It'll just mess up your mojo. You just gotta take a deep breath and climb back on for the rest of the fight.

The only thing that could keep you calm in this situation is having a more-than-26-point lead, which Jason did. I'm sure he was still freaking out a little, but in the back of his mind he knew he would still be okay, even if he didn't get any points at all. The huge points cushion he built up early in the year was being put to good use. He handled it like a veteran and rode the wheels off that thing after the pit stop. He was two laps down at one point and still finished 17th! That was a championship-deserving ride.

Chisholm: I really feel for what Jason had to deal with in SLC. It’s a helpless feeling, and you feel like your world is crashing down. I’m sure he just felt like all that hard work all season was just slipping away in an instant. So it’s a very tough thing to deal with and it can get the best of you if you let it. But when something like that happens, you just have to trust the guys fixing the bike and do what you can. When that happens, you almost go into like a trance and you’re so focused on what you have to do. It’s literally like survival mode, and it’s a life-or-death feeling (at least, life or death to your championship). You really feel how important every point is, and you’ll do anything to get back out there and hammer down until the end. When you get into that situation, it’s like nothing else in the world is even happening besides you trying to race back to the front as far as you can, and then you look up to see where you are at the end. You might not even know what position you're in! But you have to keep yourself in check. It can be easy to get overly mad and try so hard to force things that you end up crashing or making other costly mistakes. So like I said, stay in the zone and focus on what you can control, then race your heart out until the checkered flag flies.