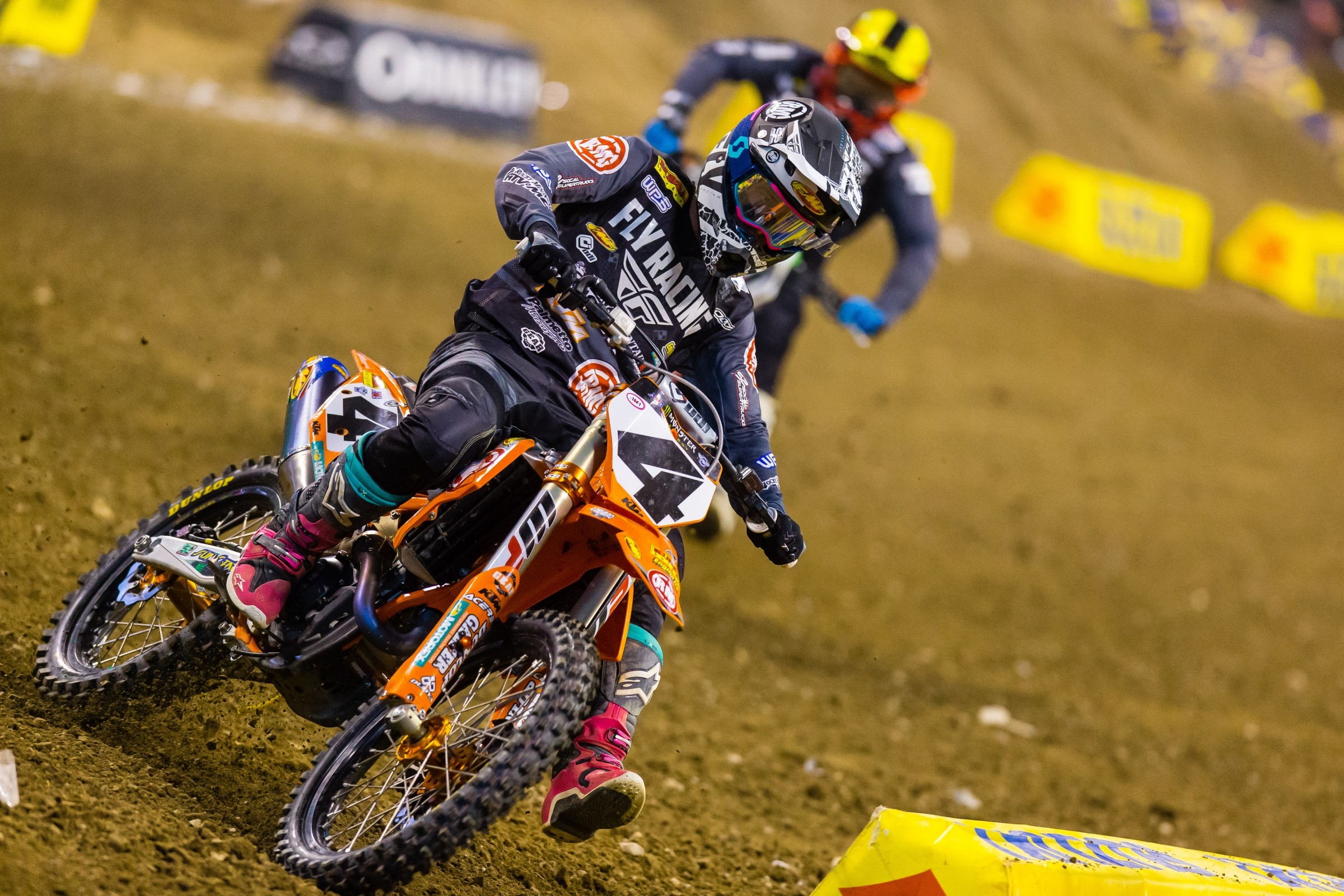 The last time we had a Triple Crown was in Atlanta, and the action was superb. Christian Craig, Justin Brayton, Cooper Webb, Eli Tomac, Marvin Musquin, Jason Anderson, and Blake Baggett all took turns getting the crowd off their feet as they battled up front. Things were just as crazy in 250SX, complete with tight battles between a number of different stars. The 250 overall even flipped during the final two laps! All in all, there were six different winners in six main events. If the action is even half as good in Minneapolis, we’re in for quite a night. —Aaron Hansel

With three races remaining in the 250SX East Region, we’re officially entering the final phase of that particular series. Zach Osborne is in a good position in the standings, but Austin Forkner, at seven points back, isn’t far behind. In fact, if he wins the final three, he's the champ no matter what. That’d be a tall order to fill, especially against the defending champion, but if he can get a win or beat Osborne by a couple of spots in Minneapolis, he’ll put himself in a good spot for the remaining two rounds. —Hansel

Down the Stretch X2

At ten points back, Jordon Smith is within striking distance, too, although he’s not in a position in which winning the rest of the races would guarantee a title. He has won a race and podiumed an additional two times, though, so it wouldn’t be a surprise to see him on the top of the box in Minneapolis. What he can’t afford to do is let Osborne beat him this weekend. —Hansel

Down the Stretch X3

Thanks in part to a seven-point penalty imposed in Indianapolis after he jumped on a medical flag, Jeremy Martin's championship picture doesn’t look great. The good news for Martin is, he’s not out of it. Facing a 19-point deficit to Osborne, he needs to make up 6.67 points per round at each of the final three and hope Forkner and Smith also have some mediocre, or worse, nights. Given how well Osborne has ridden this season, that doesn’t seem likely. Then again, Osborne was seventh in Indianapolis, Forkner was sixth, and Smith kicked the year off with a pair of sixths. We’ll see how it all plays out in Minneapolis. —Hansel

In the last race he entered, Luke Renzland had a breakthrough ride and landed on the podium in third for the first time in his professional career. It wasn’t handed to him, either—he got a good start and put in fast laps until the end against a Showdown class that included talent from both coasts. He even had the fastest lap of anyone in the main event. A performance like that can’t help but serve as a shot of confidence for Renzland. We’ll see if he uses it to get back on the box in Minneapolis. —Hansel

Fight to the Finish

Despite having a career year, Smartop/Bullfrog Spas/MotoConcepts Honda’s Justin Brayton is just four points clear of Rocky Mountain ATV/MC-WPS-KTM’s Blake Baggett for fourth in points, thanks to Brayton’s 20th-place finish last weekend in Seattle. Baggett has been trudging along since injuring his wrist in Atlanta and hasn’t podiumed since Arlington, but he’s finished outside the top ten just once this season. Much to the delight of Brayton, we’re back indoors this weekend, and he’s done well in the Triple Crown races—winning the first race in Atlanta. With just four rounds left, this weekend will be pivotal in the chase for fourth. —Chase Stallo

Even Broc Tickle will admit he hasn’t made the leap many expected in his first year with Red Bull KTM. Tickle hasn’t had a bad season by any means, but a lot of people thought he’d become a consistent podium performer under the guidance of Aldon Baker. Tickle coulda, shoulda, woulda finished second in Indianapolis and backed that up with a season-high fourth in the slop in Seattle. Tickle has a strong history in the Midwest, but struggled in the two Triple Crown rounds earlier this year. Can he pick up his first podium of the year Saturday? —Stallo

[Update: Tickle has been provisionally suspended for violating the FIM Anti-Doping Code.]

Only seven riders have made every 450SX main event this season, and that number doesn’t include second and third in points, Marvin Musquin and Eli Tomac, as both missed a round earlier this year due to shoulder injuries. Only Jason Anderson, Justin Brayton, Blake Baggett, Weston Peick, Vince Friese, and Chad Reed have qualified for every main this year. Of the riders listed above, only Baggett and Reed also qualified for every main event in 2017. We’ll see if the streak continues in Minneapolis. —Stallo

Honda HRC has extended Christian Craig’s fill-in role through the Lucas Oil Pro Motocross season. If you remember, Craig began his most recent fill-in duties with the team at the second Triple Crown race in Atlanta, and ran up front for most of the night, finishing fifth overall. Craig followed Atlanta with a fourth in Daytona, but has gone 9-16-11 over the last three rounds. The Triple Crown format fits a good starter like Craig perfectly, so we’ll see if he can get back on track this weekend. —Stallo

Cooper Webb was another rider who performed well at the Triple Crown in Atlanta, as he challenged Jason Anderson for the win in the second main event and finished sixth overall. It seemed to spark Webb, as he found the podium the next weekend in Daytona—his only podium thus far in 2018. Webb’s momentum was halted by a shoulder injury prior to St. Louis, but he’s gone 7-5 since his return. Can Webb get back on the podium at the final Triple Crown? —Stallo

Dropping letters in the name is something we've always talked about, but never made it happen—until now. Head over to Racer X Brand and check out the new RCRX Established Tee. Soft and lightweight with the right amount of stretch, it's comfortable and flattering for both men and women.