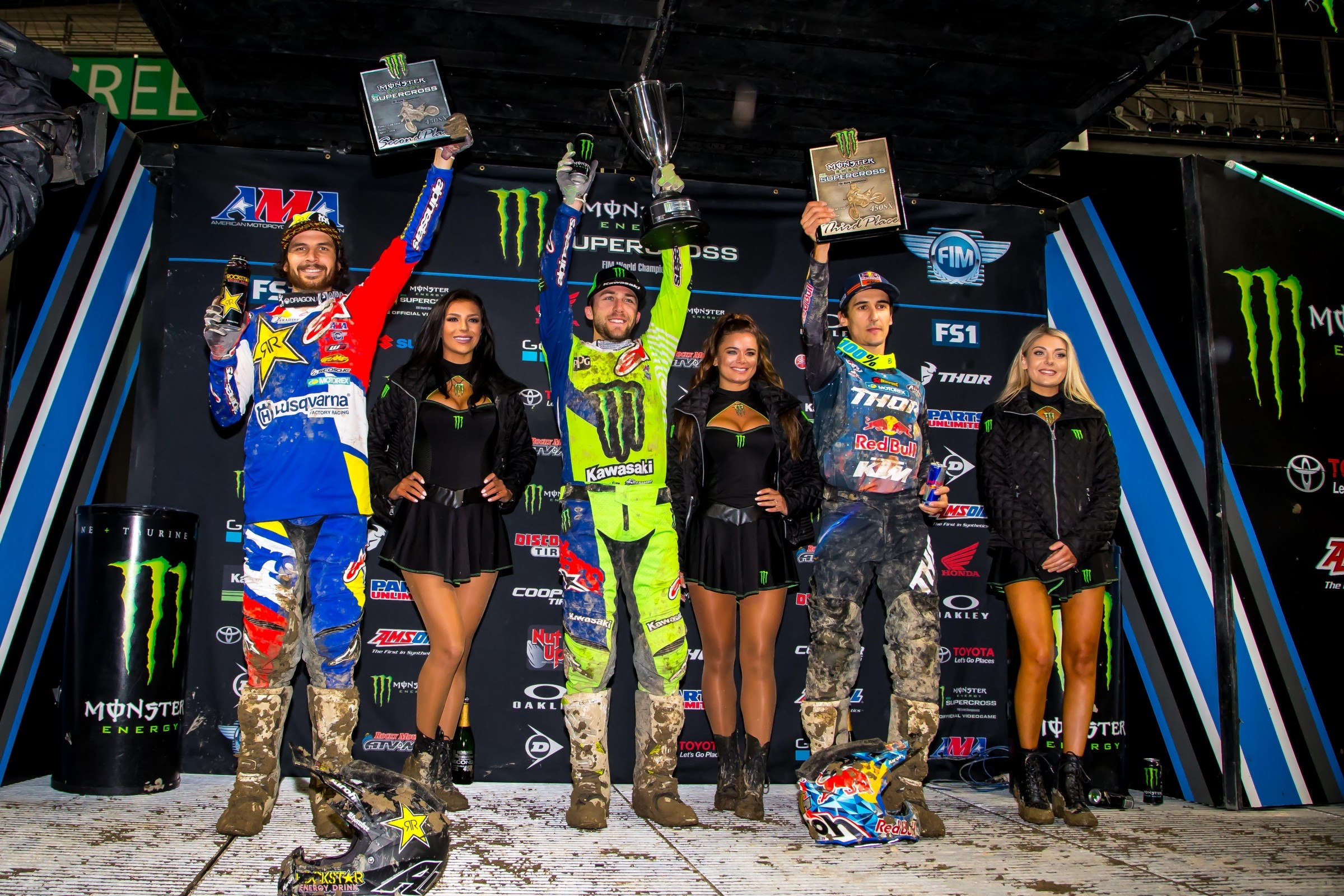 Racer X: You guys have been professional now for quite some time. Raced some mud races in the past. How does this one compare to the Daytonas, the San Diegos, the Oaklands that you’ve raced in the past?
Marvin Musquin: It’s not often we have a muddy race like that in supercross, but we have no choice. We got to go and give our best. Obviously, the conditions were pretty tough. The mud was pretty sticky for the main. The track crew did a great job for us before the main. That was pretty good in the first few laps. I feel like the last big mud race like that in supercross was Vegas two years ago. I feel like it’s really hard anyway when it’s raining in supercross. This one was one to remember.

Eli Tomac: It was I think the slowest mud race I’ve been in, ever. When we’re barely doing a double single on the triple, or just floundering down the lanes with our feet off the pegs, that goes to show you how deep and just kind of crazy it was. Every mud race is something different, whether it’s slick or where it has a base. Tonight was just like the deep, enduro, off-road style. It was pretty wild.

Jason Anderson: Like these guys, it was crazy. I feel like I went around the track a couple laps with no feet on the pegs the whole time. It was crazy. We were trying to double some stuff, but honestly, it kind of bit me in the butt. It was crazy.

It was muddy conditions, but how do you find that balance between playing it safe and just pushing it to the limits and just really going for it? How do you find that balance? What did each one of you do?
Anderson: For me, in the heat race I got out front and I was sending it. I crashed twice. I was just a squirrel. I really had to calm down for the main event and try and be a little bit more calculated. It’s hard out there. It’s hard whenever you want to win and you want to push it your hardest, but at the same time, the conditions aren’t letting you do it. For me, I really had to calm down a little bit from the heat race to the main.

Tomac: It’s tough to say which is the right way to do it. You stay up on two wheels and try to keep your feet off the ground and just ride.

So you have snow, here you have rain and mud. Sometimes you have sunny conditions. Do you have a preference, or do you just want it to be really smooth and sunny, or do you kind of like the changeup a little bit?
Musquin: Like two weeks ago in Indy, it was snowing, but we had a covered stadium, so it helps a lot. This weekend we had a really nice pits area. It was really nice, but you don’t know what’s going on out there because you’re inside and the stadium is open and it’s been raining. I thought it was going to be raining a lot more than that, but anyway, it would have not changed much. It was still already muddy. We’re so used to racing in dry conditions in supercross, but definitely last year was raining here also. I think that’s what you expect when you come here.

Anderson: For me, I would prefer just a nice track. This weekend brings a lot of anxiety to the race that you don’t like. It makes you nervous, riding in that mud. I’d rather keep it calm and just normal conditions and normal weather.

Tomac: It’s just part of it. We’re racing our dirt bikes. Most of us, yeah, we’d rather have it be our normal condition, but you just go out there and do it.

We saw a lot of bikes let go out there. Did you guys ride in such a way that preserving the bike was in your mind at all, or was that just something you left to everybody else and just rode?
Musquin: I thought I was riding pretty smooth, but I heard my bike was smoking. But it was running fine the whole time. Obviously, we didn’t go a full 20 minutes, but I saw a couple of guys out there. You saw [Chad] Reed on the finish line and all the guys stuck and smoking. To be honest, it’s important to save the bike in those conditions.

Anderson: For me, I made a couple settings to my clutch and stuff like that just so I could make sure that my bike was going to make it through the whole time. That would be a horrible way to lose some points, with a clutch issue or motor or whatever. It’s definitely in the back of your head, keeping your bike good. I think that’s one of the biggest parts about a mud race, is managing your bike, your clutch, everything like that. That goes along with trying to go fast and you forget about your bike a little bit. It’s a tough balance, but I think that’s part of it.

Tomac: In my head, it was just preserving the clutch. When you hear they cut the main down to 12 minutes, you’re like, what the heck? But when you actually go out there and do it, it’s like, all right, it kind of made sense. We were talking on the way back, it probably would have been a graveyard out there if it was a full 20 minutes. It was just saving the clutch and the motor tonight.

General question for all three of you guys. How does this race in deep mud like this compare physically to your dry conditions? Is it more physically enduring?
Musquin: To be honest, they cut down the time to 12 minutes, and obviously the speed was pretty slow because of the mud. I’m pretty sure my heart rate was really low because I know you’re trying to hold on and then not try to crash, but there was not much intensity. It was more on the muscle and the body a little bit harder, but on the heart rate it was pretty low, I think. Sometimes it can be really hard if you crash and you have to pick up the bike. That would be the hardest, or if you get stuck. But the way the main event went for me, it was actually pretty smooth.

Tomac: It’s just a different kind of style. More muscle. You don’t want to get tight in your arms. Just different.

There was a change to the layout of the track towards the end. They took out the whoops. How did that either benefit you or affect you, given that you might have already had adjusted to that challenge?
Musquin: I feel like that little straightaway without, obviously, the whoops, it was pretty much the only part of the track where we could get on the gas hard. The other straightaway, but they had to clean the whoops. It actually gave it a little bit more speed and a little bit more intensity to our riding going around the track. I feel like in the heat race, I know it was technical going through the whoops and a couple guys went down. I don’t know what you guys think, but I think it would have been okay if they would have left the whoops. Maybe they wanted a little bit more speed for TV or something. It was really slow going through those whoops.

Anderson: I was pumped that they took the whoops out because I crashed there in the heat race. They were tough, though. Honestly, we were rolling through them, but it was hard to just roll through them. It was technical, that’s for sure. For me, I was not bummed when I heard they took them out.

Tomac: I knew either way, it was going to be just a crazy race. They were gone, but we had plenty of other things to deal with.

Watching in practice, it looked like some guys were struggling a little bit with timing. It looked like if you backed off the gas coming into the corner, it would slow things down way faster than maybe some guys were expecting. Did you guys experience that at all?
Anderson: For me, I feel like my bike felt super soft just because the mud; your bike got heavier and it just drug it down. Honestly, you were trying to figure out if you could double stuff. We did track walk and I honestly thought we were going to hit the finish line, hit the triples, everything, and when we went out there, it was not that way at all. It was a lot worse than I expected when we went out for practice, so it was hard to time stuff and everything like that.

Tomac: What was going through my head was like, holy crap, we have only ten minutes to learn the track before the night show. So, I wasn’t super concerned about motorcycle stuff. It was just like trying to get your laps in your head and getting it dialed in for the night.

Musquin: I kind of feel like the heaviest the bike was, it was in the main I think for me. It was a little bit more sticky. It felt just more heavy and deeper in the ruts. There were some areas where, obviously, the pegs were dragging pretty bad. It was tough to get speed in some areas. But I think like they said, the track actually didn’t look too bad on track walk, but in between track walk and practice I think we got more rain, and it was pretty bad when we went out there for practice. I didn’t expect it that bad.