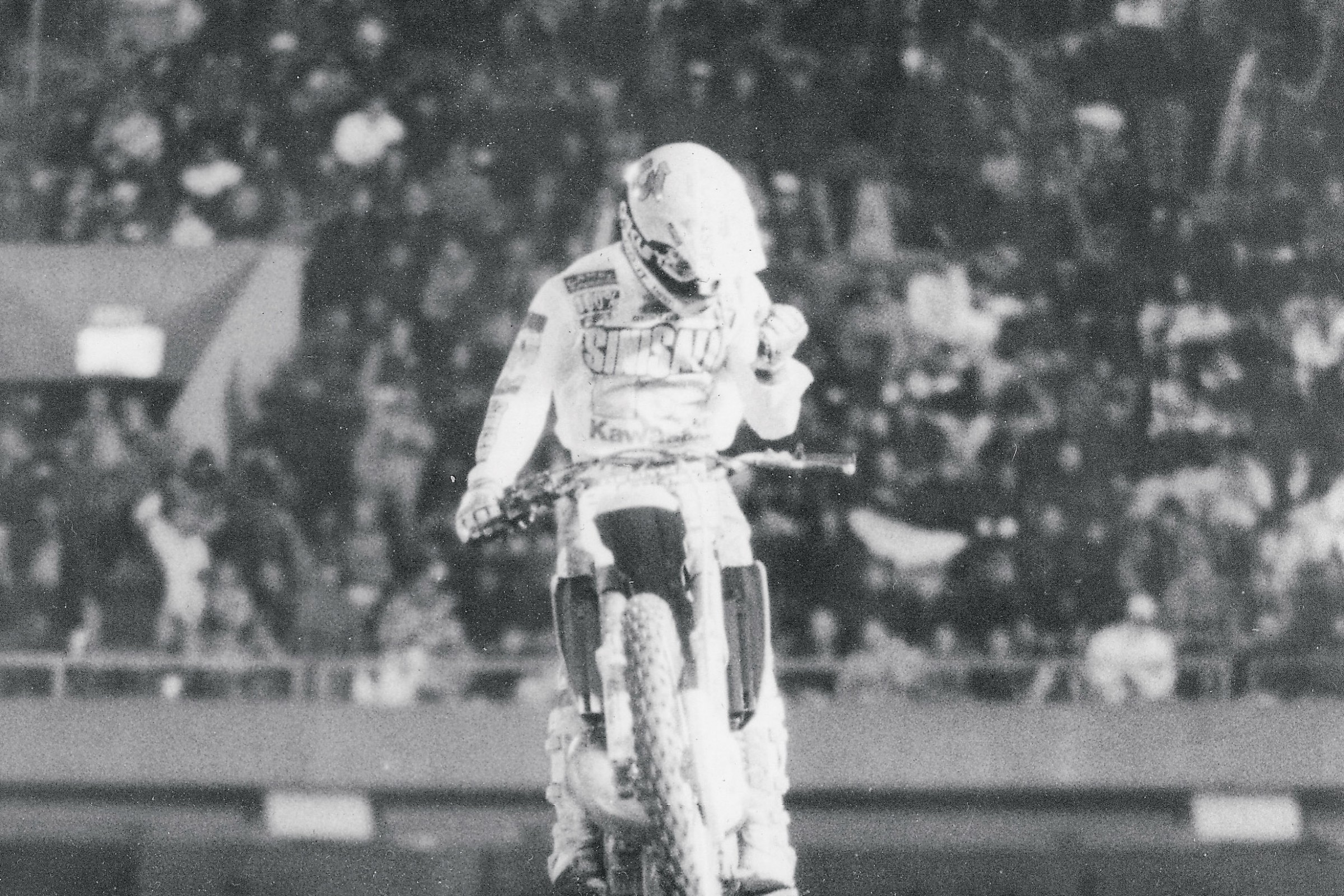 It’s Atlanta 1990 week on Racer X Online! Lost in one of the greatest supercross races ever was the fact that Kawasaki’s Jeff Ward won. In a race that had just about everything in it happen, Wardy lurked outside the camera for most of the main event. In fact, it’s not until almost 13 minutes in and five laps to go until you see or hear about Wardy from the announcers.

But like the wily vet that he was back then, Ward used some clever lines, great fitness and speed to take the win away from Guy Cooper. A triple fist pump for Wardy over the finish would also live in infamy.

We recently had the chance to talk to Ward about that day.

Racer X: Atlanta 1990. You’ve won a shit ton of races everywhere and in every discipline, but do you get a lot of people wanting to talk to you about this race?
Jeff Ward: Yeah, I don’t know why it stood out so much. Maybe because [Guy] Cooper was out front and he was going to win the supercross or something. It was really cold, I remember, that night. It was freezing. I don’t know why. Maybe it was the triple fist pump. I don’t know what it was. I think it was just because so much stuff happened. I actually had a good start. I always watch the video and I’m like third. Then I’m fourth, and then I’m like sixth. Then I must have done something because next thing you know I’m like counting top ten and I don’t even see me. So I went from up front to like 13th. I must have done something stupid. So I wasn’t even in the picture until five laps to go, and then all of a sudden when [Damon] Bradshaw and [Mike] Kiedrowski got together, that opened up. Then I think [Jeff] Stanton got some banner in his rear wheel and skidded into the corner. His brake didn’t work. I think it was just because there was like ten guys that looked like they were going to win the race and then none of them did. I did. I wasn’t even in the mindset of anybody that I could win the race, because I wasn’t there until the end.

You’re exactly right. It was a great race and you were nowhere to be found until the very end, and then you take the win. I talked to Cooper a little bit. He said that you had a great line in the whoops while he was staying in the main groove. That was a big reason why you were quicker than him. He just thought that you played it smarter.
I just found a good line somewhere in the middle of the race. That’s why I started to catch him. It was hard to pass everywhere else, so I was like, okay, I’m just going to stay close when I get to the whoops tonight. I wheelied in. I wheelied a bump in the middle, and then I’d get out of the rut and I’d blitz it down the right across all the bigger bumps with more speed, and then I’d be able to nail him in the corner like I did every time. I just kind of kept that in my pocket. I just knew I had to be close enough to Ricky [Johnson] and him on that last lap. Ricky, if you watch the video, his foot came off the peg like halfway through and kind of slowed his momentum. I probably wouldn’t have got him in that corner because that slowed him up in the middle more than the end. So I got him there. If I wouldn’t have got him in that corner, then I probably wouldn’t have got Cooper because RJ would have blocked me. So it just kind of worked out.

It’s a real interesting year because you had yourself and RJ and Coop, older guys near the end. And then you had Bradshaw, Chicken, Kiedrowski at the beginning, Larry Ward and these punk kids that wanted to come up. O’Mara holeshot, another older guy. It was a really cool era for moto.
Yeah, you don’t get it that often where it’s like there’s a lot of guys that were in their prime and won championships, and then you had a handful of guys that it was pretty much their first year of racing the big bikes. It was kind of split 50/50. It wasn’t one or two guys coming in; it was like half the field.

Atlanta a lot of time was muddy. Did you like Atlanta? Did you like that dirt?
I liked the dirt. It wasn’t bad. I always liked the layout. For some reason they always had a fun layout. The way the jumps were and the triples out of the corner and just the way it kind of flowed. It was just a good, flowing track every time we went there for some reason. I don’t know if it was the shape of the stadium or something, but some of the tracks had kind of sucked. The ruts weren’t that bad. A lot of the tracks, you know how Seattle the ruts get real bad. I don’t know if our dirt was shittier back then or they didn’t take care of it. Which they didn’t—they just piled it up out somewhere and they didn’t sift it or do anything. We had bricks in it and whatever else blew onto it.

People want to talk to you about Atlanta ’90. What else do they bring up for you and your career? What else do fans and your buddies want to bench race about?
I don’t know. I’ve had a lot of pretty good races. One that sticks out was I think that same year at Hangtown. I was hurt at Gainesville when Dennis Hawthorne crashed and cart-wheeled into the back sweeper and his bike flew up in the air and the swing arm came and hit me in the head and the arm and it ripped me—it turned my helmet like sideways. I thought I was blind because I couldn't see. My helmet was turned so far where I’m just looking… I closed my eyes and the wheel hit me in the head and the shoulder. When I turned back around all I saw was black because my helmet was turned and I was looking inside the helmet. So I grabbed the brakes and my shoulder is throbbing. I thought my head got ripped off or something. Spun it back around. My shoulder was ripped. I got like sixth the second moto.

Then the next week I did therapy and I went to Hangtown and Bradshaw slid out in the first turn and we went down. So, I got up dead last. Stanton was leading with Larry Ward and I don’t know who else was up there. I caught up to those guys and I had the lead just after halfway. I don’t know how I did it. Larry Ward thought I was lying when I went up to the second moto. I said, I went down in the first turn. He’s like, bullshit. I passed him before halfway and he was battling for the lead. He’s like, you didn’t go down in the first turn. I go, yeah, I went down in the first turn. I was dead last when I got up. He wouldn’t believe it until he saw the video. That race kind of stood out. I won the second moto by like 45 seconds. I don’t know what that day was. I had half a shoulder left because it ripped all my skin off the shoulder from the week before. Maybe I rested all week. That was the key. I didn’t train myself into the ground that week. I took a break.

You mentioned the triple fist pump. When I was a kid we would call it the Wardy fist pump. I’m up in Canada and this was still up there. It just was one of those iconic things when you won the race. I imagine you never planned it, it just all happened, right?
You can’t jump up and down because you’re on your bike, so it was just like a spaz, freak deal. I was just as shocked as I think the spectators were. I felt bad because it was Cooper’s birthday. He’s never led a supercross. If I didn’t get by Ricky and I got second and he won, I’d have been happy for him. It wouldn't have been a big deal. But it just worked out I won it and it was great, but it was kind of a bummer for Coop.