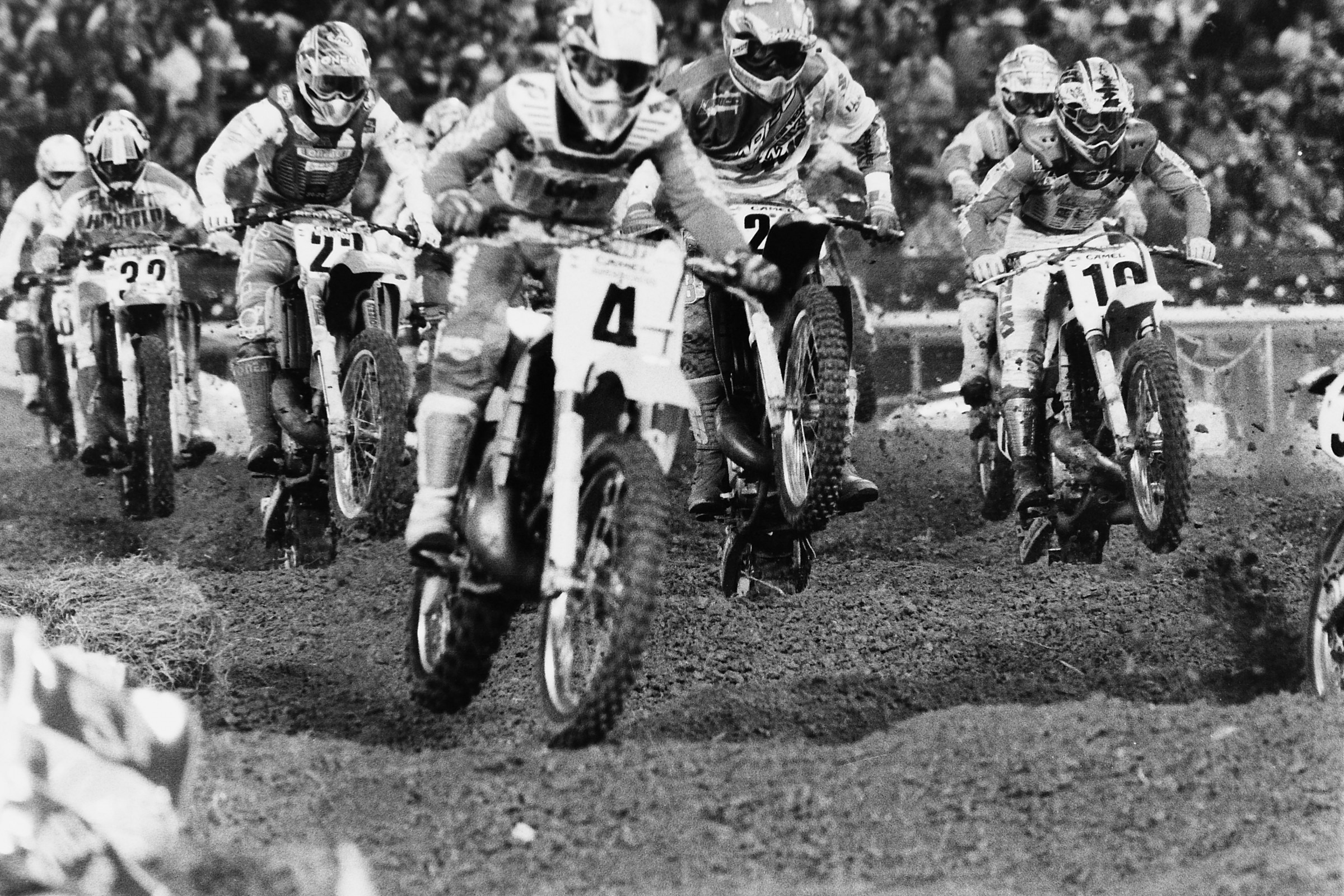 It’s Atlanta 1990 week, everyone! One of the greatest all-time supercross races (small fact: it was better than Anaheim ’86—stamp that) saw just about everything happen that could. What it didn’t see—but coulda, woulda, shoulda—was Guy Cooper winning the race. In fact, Cooper joins a list of riders like Steve Lamson, Tim Ferry, Robbie Reynard, and Travis Pastrana as the fastest riders to never win a premier supercross class main event.

I recently called Guy to talk about the race and more.

Racer X: You’ve never won a supercross. You’ve certainly been close. You were leading this thing until the very end. I guess describe all these years later, talk about that race and what happened.
Guy Cooper: I actually led it twice. I led it and then I stalled it. I always back it in to turns, and that flat turn before the whoops, I stalled the motor. I’ve said it a lot—it feels like it was just yesterday. Through the whoops, towards the end of the 20 laps, Rick [Johnson], whenever I was behind Johnson early on in the main, he was really putting the front end in the ruts in the whoops and he was slow. So, my typical self is, I get real nervous at the end of the moto, especially if I’m doing good. This time whenever I was in the lead on the last lap, I go, Rick’s not going to pass me. He’s not the one. He’s been really slow entering the whoops into the ruts. So, I probably went slower than I should have just to make sure that I didn’t screw up. I never knew that Wardy was just blitzing out there. The ruts were so deep where we had all been riding. It became quicker to get outside of it. And then I look at the video of it and I didn’t even have time to protect my inside. I’d love to do that race again and carve down a little bit and maybe have something for him. But racing’s racing.

I think that if I had my whole career to do over again, I would probably back her down 15 or 20 percent and finish more races. Also, I wouldn’t be such a nice guy. There was a lot of times where racing’s racing. We had a good race. Somebody got a wheel on me. It’s no big deal. I think I’d go back with a little bit more, not be like Damon Bradshaw or [Jeff] Matiasevich take a guy out just because you want to, but I probably would have been a lot more serious about it. It is what it is. I look back on a really good 14 years running the Nationals and supercrosses. It all turned out good.

You’re on the list of the greatest riders to never win a supercross. The Atlanta one probably doesn’t even hurt as much as that one in San Jose where Chicken took you out.
Yeah. I’ve led seven supercrosses with two laps to go. So, there were a lot of times where it was just typical chokes. The one I should have won, I straight-up had a good lead, was Charlotte one year in the rain. I had maybe six or seven seconds on Jean-Michel Bayle with about three laps to go. Larry Maiers goes, “Guy Cooper!” I’m going into a bowl turn and I heard my name and I tipped my head to listen to what he was going to say. The front end just went. Spending that money before it was time.

Atlanta ’90 was a real, real epic race. We’re still talking about it all these years later.
It just had a good flow to it. Multiple lines. If you went inside on one turn, it created a different line than the guy that went outside. But then there was also multiple lines in the next corner. So, you could set a guy up two or three corners before you would actually make the pass. You don’t see that today. Maybe what happened with John Savitsky [track builder] on a few of those, he would go in there during the night and go, “That line is becoming too one-lined.” So, he’d get out there with the skid steer and change something or they’d work it around a little bit. In the moto, all of a sudden it’s slightly different than it was earlier. With today, with all the technology and everything, pretty much they’re little robots. They know what line is the fastest. The bikes are so good. I’d love to see all the bikes handle like crap. It would be interesting to see the racing. The bikes are just so good now. I still respect it. I know what they’re doing. You go look. You walk the floor and even us old guys go walk down there and see what they’re going over. It’s incredible. I just think the bikes are too good, too fast. Let’s make them have a degree of failure to it.

People forget Atlanta ’90—almost won it, rode great. Atlanta ’89, you also had the big get-off while you were kind of going for the lead. Did you like Atlanta?
Yeah. Atlanta had that orange dirt, what I call red clay. There, it was kind of orange. It was almost like fool’s gold. It was like sparkly gold in the ground. But the dirt was a lot like an epic day in Oklahoma. It had good moisture. A little, tiny two-inch rut could hold all your weight. So, the track was really similar to what we had back home.

It was an interesting time in motocross. You were involved right in the thick of it, so you don’t really think about these things too much. For a guy like me, though, you had up-and-coming kids. You had RJ and Wardy still kind of hanging on near the end. O’Mara holeshot Atlanta ’90. Then yourself and Stanton were in this middle group of guys. It was an interesting race of the vets and the kids. The whole season was. It was a really cool season for us. It was a little bit of everything. You had Wardy and O’Show and Johnson hanging on, and then you had these kids that were just aggressive.
It was for good racing. It seems like the older group—and I’m as old as Wardy and Johnson and these guys—but I came in late. I didn’t start riding the Nationals until I was 24, 25, before people started seeing me. So, the older ones, we seemed to have more respect as far as there was a little bit of a gentlemen’s agreement of, “I’m not going to take you out, but if it gets down to the last couple laps, you do need to protect yourself.” We’re all going for some glory here.

But when the young guys came on, all of a sudden it started from the lap one. So, when I came back home between Nationals, I started playing what we called the Damon game. All of my buddies, I said, you guys cut the track. Get in front of me. Roadblock me. Brake-check me. Do whatever you can. Whenever I get around you, cut the track again and get back in front of me. For 30 minutes I want people in my way. Chris Smith—not the Chris Smith, that’s the enduro guy, but a local out of Stillwater—he was 200 pounds and a good, local pro guy. He would just come straight at me, like Jim Holley but without the skills. We collided and hit the ground more times, but it was good for me because the Damon game was what I was prepared for after six months of seeing the young kids coming up.

When you have your buddies and fans bench race with you, what comes up? Does ’90 Atlanta come up?
1990 Atlanta comes up a lot. I’d love to re-race that thing so many times. But overall, I’m still happy with it because what a race. There were so many different passes going on. You know that both [Mike] Kiedrowski and Bradshaw, they both were going faster than I was. They clearly passed me and took off. It doesn’t even show that much when you watch footage, but they were two young guys. They had it going. Those two guys would have won the race, had they not fallen.