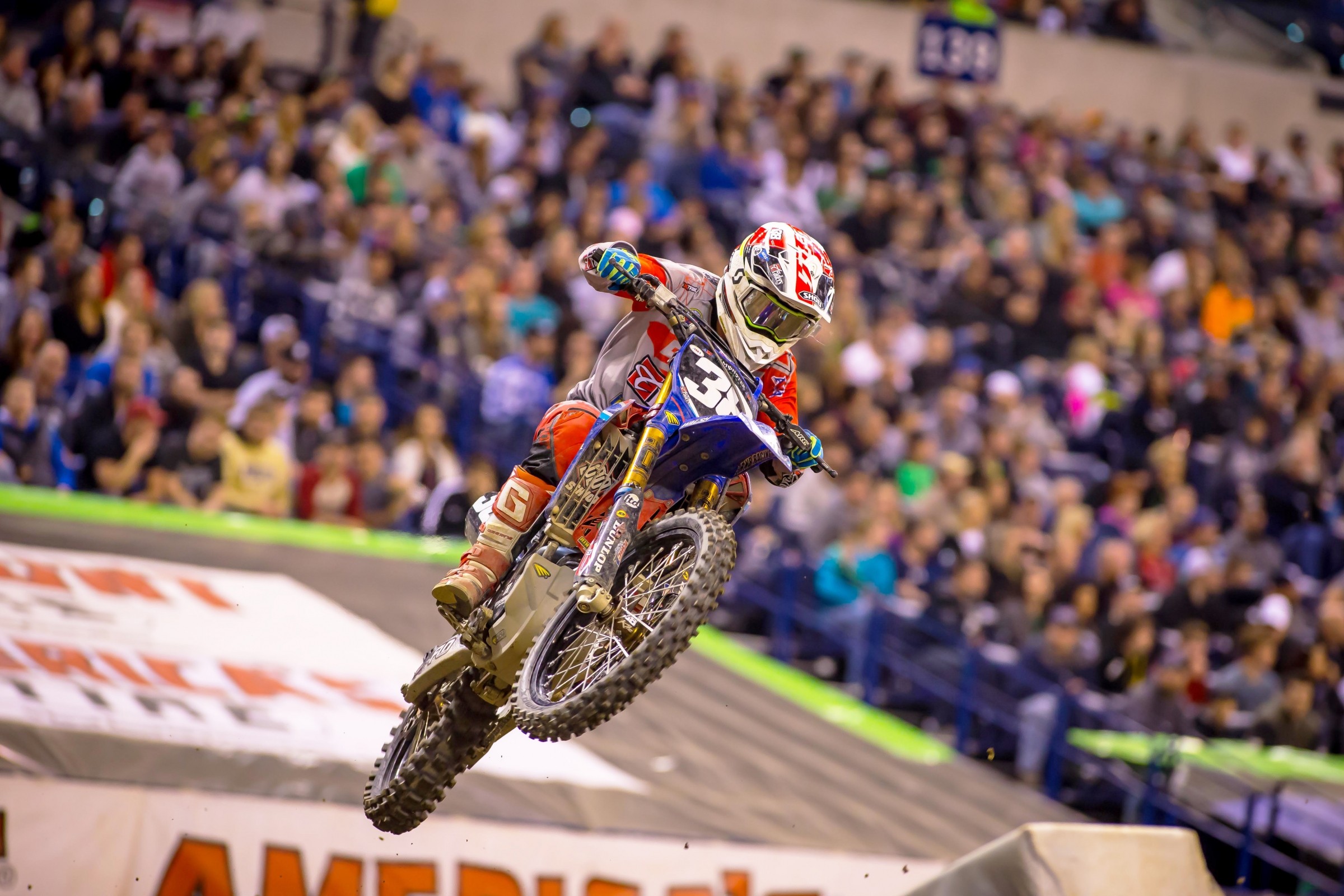 Ladies and gentlemen, let me introduce you to “El Dozer.” You may not know that name, but you may recognize him by his given name, Luke Renzland. You may not know much about El Dozer, but he just went out in a stacked field in Indianapolis and scored a third place in the 250SX East/West Showdown for his best finish ever—and oh, by the way, Renzland had the fastest lap of the main event.

The Traders Yamaha rider has had a pretty good season, but as usual, he never seems to start up front. Trust me, I’m a card-carrying member of the Luke Renzland fan club. The kid doesn’t have blazing speed, which hurts him at times, but he’s solid, he’s in shape, he never quits, and I think he’s been a tad underrated for most of his career that started with a CycleTrader.com/Rock River Yamaha ride a few years ago. But yeah, Luke, what about that night in Indy?

“All day, I was kind of a little bit off. I actually felt really good on the bike, but in timed practice I was never able to really get a lap I was proud of. Obviously, the heat race wasn’t good. I qualified ninth out of the heat race, so I barely got in,” he told us on Monday night on the PulpMX Show. “When the main event came around, a good start will do a lot for you. Just being able to be in clean air and be with the top guys, it kind of just drafted me right into the pace and I just kind of felt right at home right there with that pace. A lot of firsts for me. Obviously, first podium. First fastest lap of a professional race. I was the top-scoring Yamaha, so I got the manufacturers’ point for that. Just a lot of firsts. It was a great night overall.”

Renzland got passed late in the race by Monster Energy/Pro Circuit Kawasaki’s Adam Cianciarulo, but didn’t realize it was the last lap. Cianciarulo confirmed this by telling me that Renzland just kind of gave him the spot and he expected a little more fight.

“Honestly, I had no clue it was the last lap, or else I probably would have dozed his ass,” Renzland laughed. “At that point, I was just happy with the podium position. I thought we had another lap after that. I was just going to mail it in for the third. At that point, he was pushing me over some of the deepest ruts on the track. I was seriously cursing him out in my helmet. Like, you’re going to take this thing away from me right now? Like come on, be nice about this. After we went around like 15 seconds after he passed me and we were coming up on the finish line and I saw Martin lit the candles, I was kind of bummed I let that one slip away. See you in Vegas, AC!”

Confidence is a funny thing in this sport, and seeing as how Renzland’s previous best finish was a sixth, who knows what this result will do for him moving forward. The team’s race director, Skip Norfolk (who knows a thing or two about winning races—he wrenched Jeremy McGrath to many of his 72 career victories), thinks that some dedicated testing with Ohlins Suspension was a big factor in Luke getting comfortable on the bike.

Norfolk’s been a big help for Renzland in the two years he’s worked with him. “With a guy like Skip, with the amount of knowledge he has and experience he has, it’s not even like he needs to tell you anything. It’s just experience and the smarts that he has just kind of radiates out of him, honestly. You don’t even have to ask him questions. You don’t have to pry at all. It’s just that he’s kind of on a different level.”

I know you haven’t noticed much of the #38, but he’s fifth in points after his podium.

“I think Tampa and Indy were the only two main events I didn’t crash in for the whole year,” Renzland said about his year in general. “It’s kind of been a struggle, but the results have been there. Obviously, the speed has been there all year. It’s just a matter of putting myself in the position to actually finish where I’ve known I belong the whole time. To do it at the East/West Shootout, that was nothing that I would expect.”

Renzland got himself the “El Dozer” nickname from some GNCCs he raced in the off-season and decided to carry that into the moto side of things. It’s cool to see a kid like Luke get some reward for the effort he’s been putting in, and that goes to the Traders team as well. With no motocross effort planned for the summer, Renzland is hoping his ride and season results open some eyes.

“Yeah, that’s the goal for sure, is to figure out something (for motocross). I’m going to get prepared the best I can. I’ll be ready to go,” Renzland tells us. “El Dozer will be tiptop shape no matter what happens, whether I’m racing GNCCs or outdoors or racing on my couch just watching the TV. I’ll be in shape either way.”

Watch out everyone—El Dozer’s got some confidence and belief in himself and his machine. Stay tuned in Foxboro to see what and where this takes him. You’ve been warned.