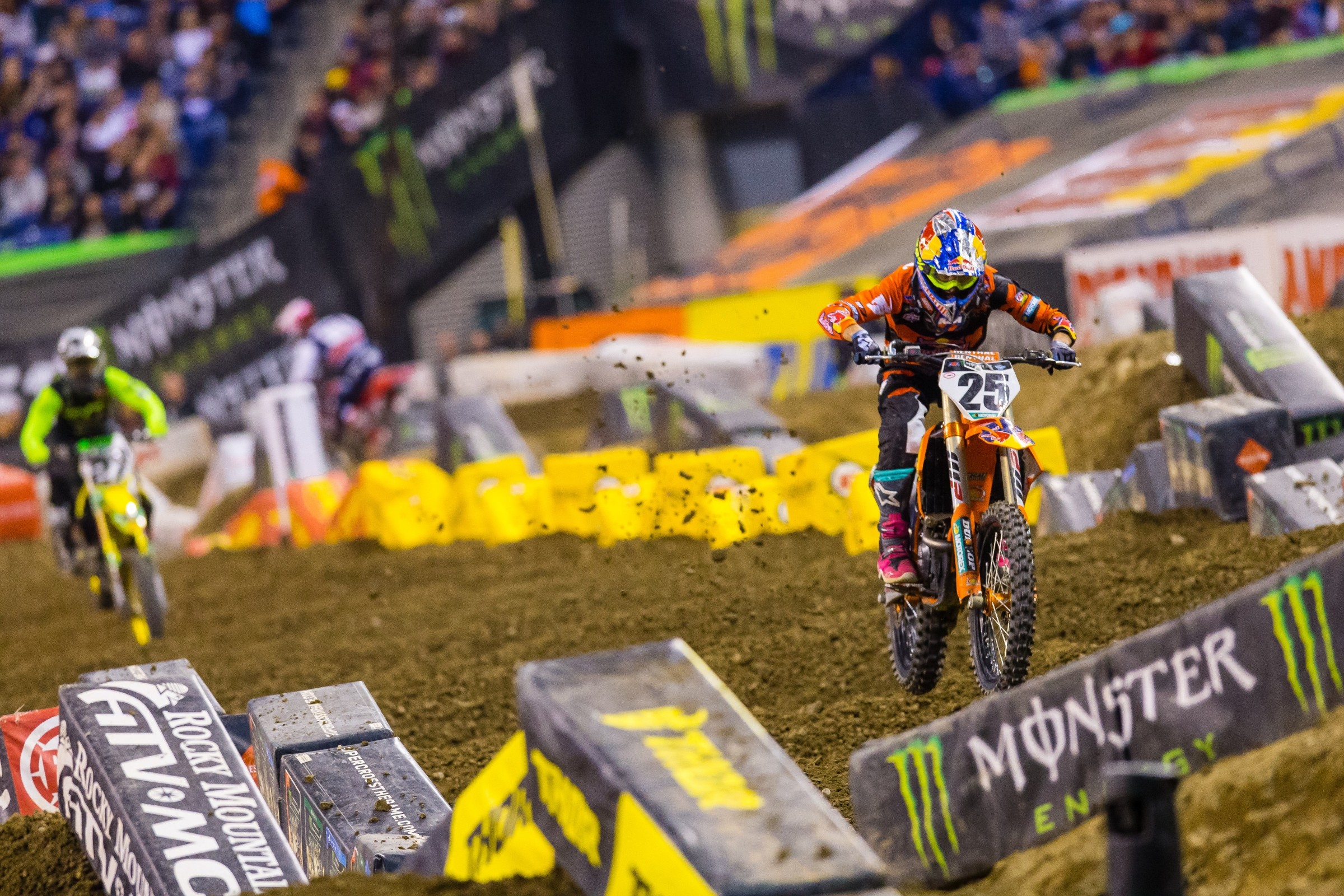 We might not have seen a great battle for the lead in either class at the Indianapolis Supercross, but there was still plenty of action happening behind the leaders.

In 250SX, Indy marked the first 250 East/West Showdown of the season, where both classes competed head to head and created the potential for large points swings. We almost saw that as Zach Osborne and Aaron Plessinger both got terrible starts and had to charge their way through the pack to salvage points.

In 450SX, Marvin Musquin won by just under 30 seconds, and it was the largest margin of victory since Ricky Carmichael won the 2006 Daytona Supercross by 33.260 seconds over Chad Reed. And Eli Tomac continued his unpredictable season as he crashed big halfway through the main event.

Just one week after Eli Tomac's dominating 20.721 second victory in St. Louis, Musquin had a "hold my beer" moment and backed him up with a 29.349 second victory, thanks in large part to Tomac pushing him at the beginning of the race and then going down around the halfway point. After the race, Musquin commented on Tomac's crash and how hard it is to keep pushing with such a large lead.

"Obviously, you can say Tomac crashed, but he was still behind me and I was ready for a battle. That’s a bummer for the fans to see that, but I’ll take it. I was up there and riding my own race. To be honest, when Tomac went down after that, it was a big gap. It’s hard to keep pushing, but at the same time, you don’t want to make mistakes. I played it safe until the end."

Take a look at how Musquin's lead grew throughout the main event over Dean Wilson who finished in second, a career-best for him.

Tomac's strange season, which is starting to become reminiscent of James Stewart's 2014 season, continues as he found himself on the ground again after hounding Musquin for the first half of the race. There wasn't any footage of the crash on the TV broadcast, but luckily a fan caught the replay that played inside the stadium.

It looks like he took a pretty hard shot to the chest as he cased a quad in the middle of a rhythm. He sat on the side of the track for just over a minute before getting back on his bike.

Tomac has taken some criticism by the message board heroes in the past for not gutting out rides after having a crash, so it was good to see him get back on his bike and lay down some lap times that were close to what Musquin was doing. You can see after his crash on lap 13 that it took him a few laps to get going, but he eventually started putting in consistent laps in the 47-second range.

Indianapolis was the first round of 2018 where we got to see both 250SX coasts compete against each other, and both the East and West Region points leaders got terrible starts in the 250 main event. Osborne and Plessinger both got hung up on a Tuff Block dragged onto the start straight by Adam Cianciarulo's back wheel.

Both riders got going at the very back of the pack, and Aaron Plessinger made moves quickly while Osborne struggled to make passes as fast as the youth GNCC racer. I wanted to see how their lap times compared coming through the field, as it seemed like Plessinger was having a much easier time even though they finished just two positions apart.

It's true that Plessinger found his groove much faster than Osborne and was able to pick riders off while they were still grouped together, but once the race settled down, the two were actually pretty close in times. Osborne also logged his second fastest lap of the race on the very last lap—no doubt focused on getting past Austin Forkner, who was just ahead of him.

After the race, Osborne said, "To come out dead last after the Tuff Block came in front of me, it sucked. I was pretty bummed. I looked over maybe six or seven minutes into the main and Austin was still seven or eight bikes in front of me. I was like, all right, it’s time to grind now. To come back to seventh and have a decent main event was pretty good. I feel like all in all, I salvaged decent and rode okay.”

The lap times for both classes were right in the mid-40 second range for most of the night, and that meant they burned a bunch of laps over the course of the night. In the main event alone, the 450SX class turned 27 laps.

It's been over a year since supercross switched to a timed format for the main events, but I wanted to use this race to illustrate how much a difference that change can make when lap times are short like they were this weekend.

Under the old 15- and 20-lap format, the 250SX main even would have been just 10 minutes and 49 seconds while the 450SX main event would have been 15 minutes 15 seconds. With the new timed format, we got to see about five minutes more racing in each class. That's almost an entire heat race!