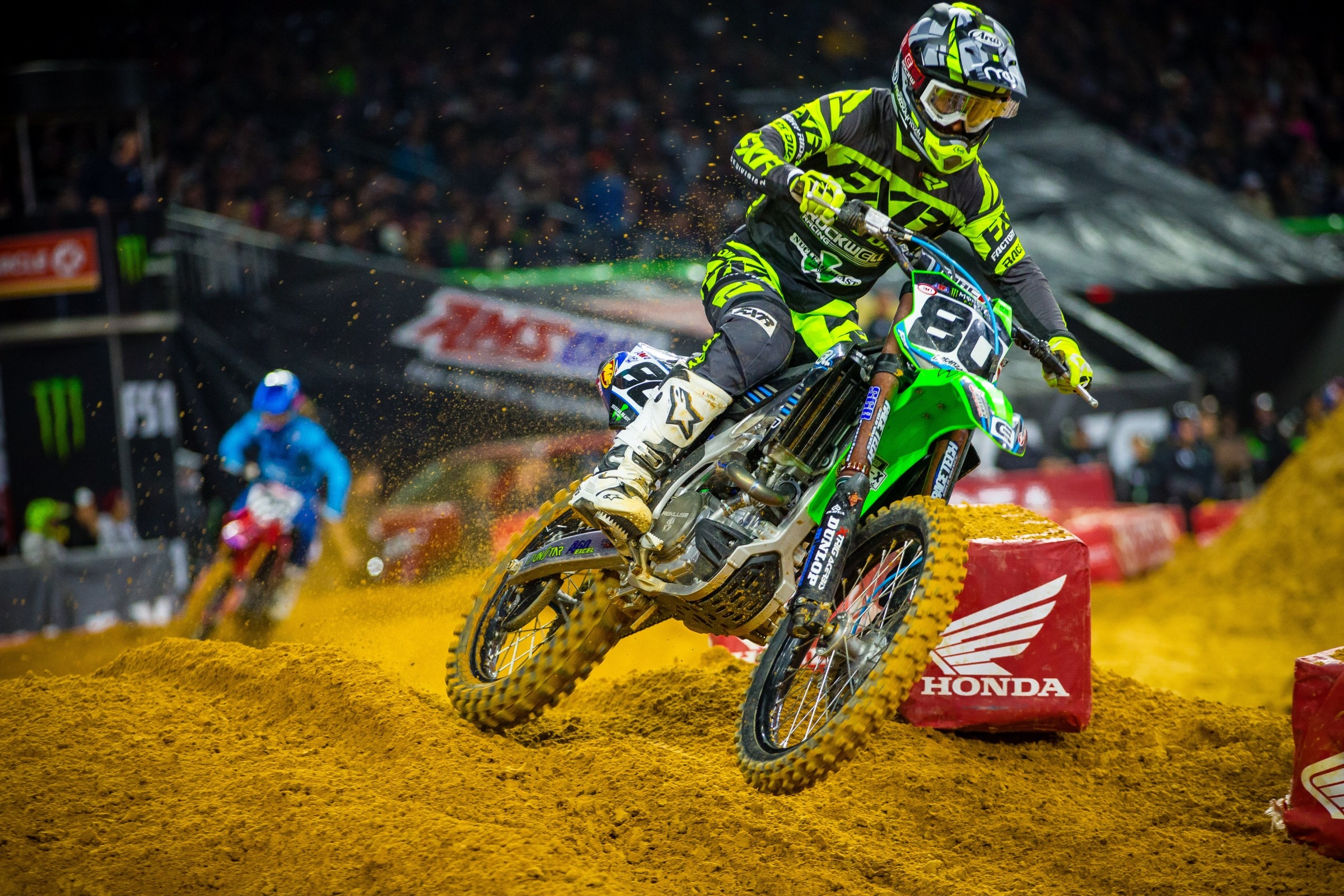 Disclaimer: Racers, fans, and keyboard warriors alike, don’t let this article hurt your feelings. Racers, you may not like the honesty here. Fans, you may not agree with or understand my point of view, as you were not the one out there on the battlefield. Keyboard warriors—well, there’s nothing I can tell you that you don’t already know, right? I have to go through the LCQ to get to the main event, so how much do I really know?

Let’s start with the ongoing debate of injuries and the “tracks that are causing them.” It seems like an awfully familiar argument with political parties putting all the blame completely on one thing or another. Let’s all use our common sense here: there is not just one problem, and there is not just one solution. My argument is not that nothing should change—I believe that there are always small changes to be made that can improve rider safety. With that being said, the very core of this sport, the reason most people enjoy racing, is that it will scare the crap out of you. Why does it scare the crap out of you? Because you know you can get hurt at any point. That’s what that adrenaline rush is all about.

Tracks really have not changed much at all in the eight years I’ve been pro, so there’s no direct connection between injuries and the tracks. The injuries come with riders pushing the limits, riding sections harder than they were ever designed to be ridden, and doing jumps that were never intended to be jumped. You try and build a safe amateur track with tabletops everywhere and, guess what, the top guys in the world will find a way to jump two tables in one!

The Indianapolis track was not more or less dangerous than others. Of course, the ruts make a track more difficult, but they also slow the race pace. Typically, slower speeds equal less risk for major injury. As a rider, you must constantly be evaluating risk versus reward. It’s a struggle that I think many of the top five to ten riders have not quite figured out yet, whether it’s doing a huge jump to gain a very small amount of time, going for a jump after making a mistake when you could just settle to double it that lap, or attempting a pass where it maybe could have waited another second or two. These are all things that riders must constantly weigh, and these decisions are what cause injuries. Small mental mistakes can have extremely high consequences in our sport.

Okay, now that I have that out of the way, let’s go in chronological order here.

Aaron Plessinger’s bike: How does that happen? All I know is, I would have been scared to death even after they got it to shift into gear. Imagine what was going through his head the first couple of laps, with the thought of that thing possibly going into neutral. I give him credit for mentally keeping it together.

Luke Renzland: Wow! He didn’t look out of place one bit up there. Reminded me a bit of my first top-five finish, which took place in Indianapolis five years ago. When it clicks, it clicks. The only time I saw him falter was during the last lap or so, when you know he must have been freaking out inside his helmet. He’s worked his entire life for that moment— congrats!

Blake Wharton: Wow, how about that ride!? I think people underestimate how big of a deal it is for him to make a return the way he did. His starts were good, he was fighting for positions, and a few more races and he could be right back where he left off! To think he was gone for four years, that’s about the equivalent to 40 supercross years...

Adam cianciarulo's pass on Jordon Smith: Dirty? No. Accidental? Sort of. The angle they showed on TV didn’t show the full extent of what happened and how locked together they actually were. Adam’s front fender was literally latched onto the side of Smith’s bike. The right side of that weird jump would shoot you much higher than the left side, so with Adam still in the air and Jordon cutting over, there wasn’t much Adam could do at that point. Once he landed, he was already in the side of Jordon, and from there he just did the best he could to continue to make the pass stick. That jump was extremely odd and gave riders problems all day. In practice, I accidentally almost hit my head on the stadium ceiling, and I saw at least four riders get sent straight over the bars. By the way, this is a perfect example of a basic obstacle being over-ridden!

Just a little side note on AC92’s personality. That kid cracks me up. His podium interviews are genuine and funny, and he’s hysterical in the post-race press conferences. He went over the bars so hard in practice and immediately stood up and waved at the crowd. I wish that more of the top guys showed their personality more on the podium and in public interviews. You can still plug sponsors, and if anything, it just makes the sponsor plugs more effective because it comes organically.

Jeremy Martin’s red flag incident: Hmm, this is tough. I’m not sure what the exact rule states as far as a supercross triple goes, so I’ll just explain what I do and what every other rider does. When you see a red cross flag, you must roll until you’re passed the downed rider. Simple. When Jeremy rolled the triple, I’m 95 percent sure the downed rider was no longer there, so I’m guessing he assumed all was clear. I would have possibly done the same if I was able to quickly assess that no one was there and all was safe. Again, not sure of exact rule and if you are forced to roll-roll-roll a triple. (Click here for more on this incident.)

TV Coverage: The TV coverage was poor on this race, to say the least. I don’t think it showed Tomac’s crash or Peick’s crash, and it didn’t really have a great angle of Wilson’s take-out.

Track Conditions: The 250s always go out first, whether it be for practice, qualifying, or the night show. I don’t think fans quite understand the difference in track conditions between the 250 and 450 class. We might as well be racing two completely different track layouts. By the time the 450s get out there and spin a couple of laps, the track is so far gone it can begin to feel like survival. Upon watching the main event (because I made friends with a Tuff Block while running third in the LCQ!), this race really did look like a survival race to most guys out there.

Risk Versus Reward: This is where it becomes very important. You need to know when a jump deteriorates to the point of no return. The rhythm lane after the start turned into a table over two, triple (or you could call this a quad-triple). It was claiming guys all day, and to me, it just didn’t look like it was so much faster to be worth it. I don’t have access to the Dartfish “ghost software” video program, but I did the basic line behind guys like Tomac and Bowers in qualifying and it seemed like the time they gained there was insubstantial.

This rhythm lane in the main event got to the point where everyone (with the exception of DeanO) stopped jumping it. Tomac and Peick were two guys who continued trying to do it, and it bit both of them. I believe they both cased the quad and went over the bars.

Dean Wilson’s take-out on Broc Tickle: I’m going to call this a temporary lapse in judgement. Both are nice guys and never really ride dirty on the track. I know this wasn’t intentional on Dean’s part; however, Dean should have definitely anticipated the main line was cutting down that hard. If it were lap one of the main and lines weren’t formed yet, I would understand the confusion (kind of like the Stew/Dungey incident couple years back). In situations like that, you don’t always know how hard the guy is going to cut down. Eighteen minutes into the main event in that specific corner, you should know. Look at it this way: Ultimately, that could have been the pass for the podium, because I really think Brayton would have caught them. You have to do what you have to do sometimes.

Last but not least, Eli Tomac: Eli is an animal. There’s no doubting that. He reminds me more and more of James Stewart lately. Both Stew and Eli struggle to back down and are constantly riding that edge. Not to say that Eli rides out of control, because I don’t think that he does; I just believe he’s always right on the verge of being out of control. He’s riding the bike and the track for absolutely everything it has. It’s incredible to watch, but it has its consequences. The problem with these guys is that it’s all they know. They don’t know how to back it down to 80 percent. I struggle with the exact opposite problem, where I cannot ride at 100 percent—something in my mind doesn’t allow me. I always ride within my means, which is why I am rarely injured, but it also why I have not reached my goals of being a top-five or top-ten rider in the 450 class.

I commend Eli for getting up after that crash and finishing the race, I just hope in the future that he can choose the moments when to take the risk and when not to take the risk.

That’s all I have for Indy, see you in Seattle.

Special thanks to AJ’s sponsors: