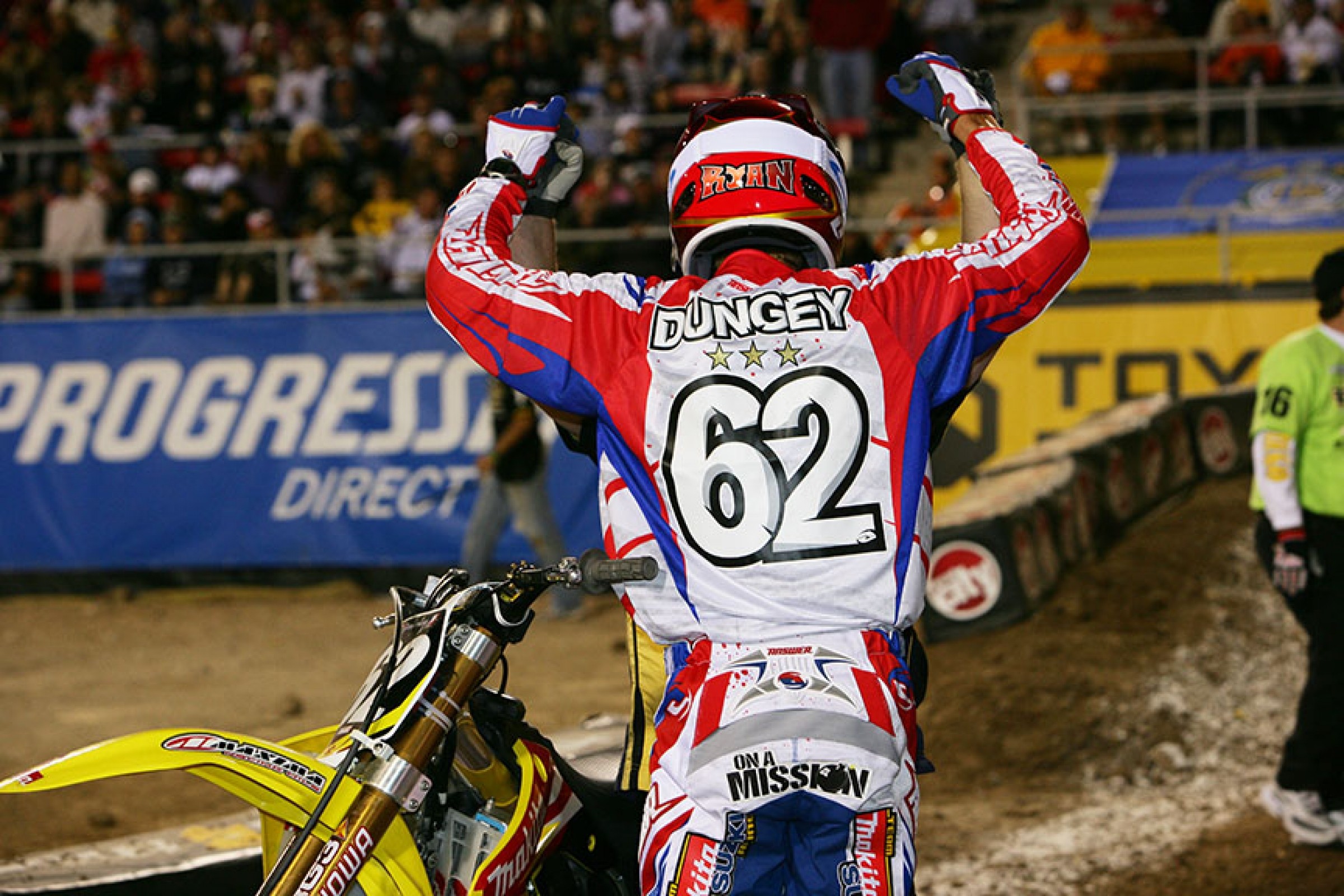 Some history here: Generations ago, combining the 125SX races into East/West events was actually quite common, as most races held in the center of the country—like in Texas, Oklahoma or Minnesota—were run for combined points in both series. At the season finale (usually held at the Los Angeles Coliseum or, later, Sam Boyd Stadium in Las Vegas) the West would run one more points-paying race, then both East and West riders could come out for an additional East/West Shootout with some big purse money on the line.

Evolution took most of that away. One of the chief complaints of holding three or four races with both East and West riders? It was tough on privateers, who faced double the competition in hopes of making the main event and collecting purse and contingency money. This mattered because in its nascent days, the 125 class was still very much the support class. Only a few riders had real factory support, and even those riders weren’t making huge money. When the LA Shootout offered up $10,000 to the winner, that was serious incentive!

Starting in 1997, the random East/West event went away. The coasts only met at the season-ending shootout, and even then, points weren’t on the line. More recently, the Vegas race has shifted formats a few times, and now we have witnessed Shootouts that not only let the East battle the West, but also paid points and decided championships. Those races have been positively nuts.

Now the mid-season points-paying East/West race is back, although the name “Shootout” was quietly changed to “Showdown” a few years ago. Great East/West battles, by any name, have taken place time and time again. Here’s a rundown of some of the better ones for The List.

Perhaps the quintessential East/West Shootout, as this was the first under the new “the two regions only meet once a year” strategy. Everyone wanted to see Kevin Windham and Ricky Carmichael, the two young guns of the sport, finally face off, although only Windham was a supercross champion that year. Tim Ferry won the 125 East title that year. Carmichael, a rookie, won lots of races, but crashed a lot as well. In a one-race shootout in Vegas, though, speed sells. Windham and RC battled hard, including aggressive contact and some stuffing in the corners. As it normally was in the RC/KW battles, Carmichael was wide open and hammering the track while Windham flowed with smooth style. Windham’s form won out as Carmichael crashed, and he was later caught by the TV cameras crying while sitting on the Tuff Blox. RC never took losing very well!

Similar to Carmichael in ’97, James Stewart didn’t win a 125SX Championship in his rookie year, but he did light the scene on fire with mega-fast riding and plenty of victories. Even though Travis Preston was the new 125 West Champion, most people just wanted to see Stewart versus the dominator of 125 East, Australian Chad Reed. Again, speed gets the hype in a one-race battle. This race wasn’t actually a nail-biter, as Bubba got away early and Reed couldn’t catch him after a so-so start. The significance of this race is that it was the first time Stewart and Reed ever raced each other. They would meet up a few more times throughout their careers….

Stewart romped to the 125SX West Championship in his sophomore year, and by shootout time, the hype was so heavy that ESPN analyst David Bailey, when asked who could possibly beat Stewart, said, “The only guys who could do it are the guys who could see him go down in the first corner and get into the lead right away.”

That didn’t happen, because Stewart grabbed the holeshot and then started quadding through a rhythm lane. This was before quadding was really a thing. He was on a 125, by the way. On the second lap, though, he crashed. He got back up and wadded it really hard one lap later. That’s a tremendous amount of action by one rider packed into just three laps.

Stewart suffered a broken collarbone, which would cost him the chance to defend his 125 National Motocross Championship. Andrew Short scored the upset Vegas win, the first of his career.

Okay, let’s just run the trifecta of James Stewart on a 125 in the Shootout races. In ’04, he won the 125 East title while riding a KX125 against a slew of 250 four-strokes. Stephane Roncada had his KX250F dialed in for Las Vegas and gave Stewart one heck of a battle. It was great racing from beginning to end, as Roncada was the first rider to straight-up match Stewart in speed all year.

It was RM125-mounted Travis Pastrana versus the YZ250Fs of Nathan Ramsey and Ernesto Fonseca. Fonseca led while Pastrana and Ramsey went back and forth for second. Pastrana bobbled and Ramsey locked down second, then Fonseca nearly crashed and Ramsey took the lead. Pastrana tried to respond by jumping a triple that was not doable on his 125—he came up short and cased it hard. A lap later, Fonseca went down in the whoops and Pastrana reclaimed second, but by then, Ramsey had set sail en route to the win.

Monster Energy/Pro Circuit Kawasaki riders Jake Weimer, Josh Hansen, Christophe Pourcel, and Dean Wilson went at it like crazy all race to mark one of the most dominating single-race performances from Pro Circuit in history. At the end they were all still within six seconds of each other, with fifth-place Justin Barcia, the first non-Pro Circuit Kawasaki rider, finishing over fifteen seconds back. 250SX West Champ Weimer led every single lap while Wilson dropped spots to Hansen, then Pourcel, late in the race to go from second to fourth.

It doesn’t always go that well. The PC team swept the East and West Championships with Ben Townley and Ryan Villopoto, respectively, so everyone was pumped on a showdown between the teammates. Instead, they both suffered bike problems almost immediately and failed to finish the race. Ryan Dungey picked up the win, which, that year, awarded a Toyota Tundra pickup. Dungey would win the Shootout again in 2008, and with it, another Toyota truck!

In Houston, it was the Vohland brothers versus the Peak/Pro Circuit Honda duo of Jeremy McGrath and Brian Swink, a duo that would go on to win the two 125SX championships that year. Tallon, on a Suzuki, won; Tyson finished third on a Kawasaki, the only time in AMA Supercross history that brothers ended up on the same podium. How deep was the field?

Every rider in the top ten would win a 125SX main event except for Steve Lamson, who would win two AMA 125 Motocross Championships, 20 outdoor Nationals, and become the one and only rider in Motocross des Nations history to win a moto outright on a 125cc motorcycle.

Cooper Webb had a healthy points lead in 250SX West, but broke his wrist a few weeks before the race. He would have to soldier through Vegas and earn some points, and then the nearly impossible happened when the skies opened up and Vegas turned into a mud race. Joey Savatgy needed to win and hope for the best—he did, but Webb pulled through for 11th place, enough to win the championship by a single point.

If you’re not familiar with this one, we’re not sure you how accidentally scrolled onto this website. The East/West Showdown also paid points for both coasts, although 250SX West was already wrapped by Justin Hill. Eyes were on a three-rider Zach Osborne/Joey Savatgy/Jordon Smith East Coast title fight, and all three ended up crashing early. Savatgy appeared to be in position to get the title until the last lap, when Osborne, who went down in turn one, somehow caught him and executed a block pass in the next-to-last turn of the season. That gave him the title in movie-like fashion. Adam Cianciarulo won the race ahead of Hill, and no one really noticed that—this was all about the championship.