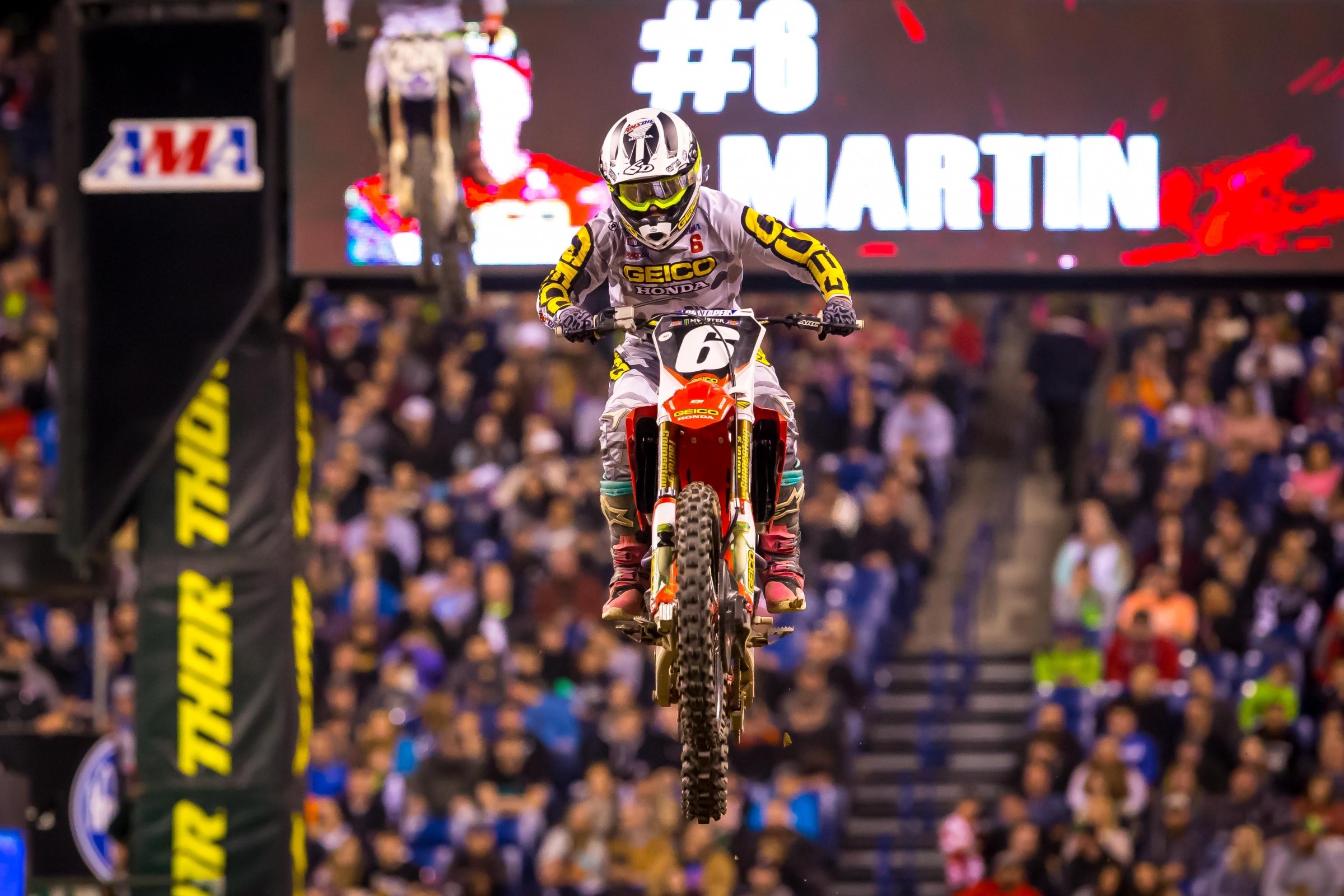 During the East/West Showdown on Saturday night in Indianapolis, a crash resulted in track officials turning on the red safety lights on the face of a triple jump. GEICO Honda’s Jeremy Martin was leading the race when he approached the triple jump, saw the lights, and rolled the first jump. Then he doubled the next two jumps. When a red light is on, the riders are required to roll all three jumps, not single-double like Martin had done.

The AMA ruled that Martin would keep the win but be docked seven points. Instead of getting 26 points for the win, Martin was awarded 19.

This, of course, brought a lot of confusion, as in 2016, a similar incident occurred when Red Bull KTM’s Ryan Dungey jumped through a section where the red cross flag was being shown. This resulted in Dungey begin stripped of his win and awarded third place. The win was thus given to Jason Anderson, who finished second.

So, why did that not happen to Martin? Well, it’s because the rulebook changed after the 2016 season. That means the 2018 rulebook has a different rule than what Dungey faced in 2016.

Under section 4.16 of the rulebook, it states that a rider must do all of the obstacles individually (i.e. no double, triple, step on/off, etc.) when a red cross or red flashing light is shown. It goes on to say that if Race Direction determines that there was a blatant violation of the rule, the penalty will be as follows (emphasis ours):

A. During practice and qualifying, the loss of the fastest lap time during that session.

B. During Heat or LCQ races, the loss of number of positions gained, plus two additional positions in the final results for that race.

E. During a sighting or cool-down lap, a fine as determined by Race Direction.

F. If at any time Race Direction determines that it was not a blatant violation of the rule, a warning or fine may be issued.

So, in the case of Martin, no positions were gained, so rule 9C was applied: He was stripped of points and purse equal to two positions (this case first to third) and an additional two points.

We talked to the AMA’s Supercross manager, Mike Pelletier, this morning and he explained it.

“The rule changed right after that season (2016). The rule for Dungey was two positions. Rule changed since; now we’re at points equal for two positions plus two additional points.”

“If you gain positions, we’re going to take back the positions that you took,” Pelletier said.

By the way, another team (we hear it was Monster Energy/Star Racing Yamaha) alerted the AMA to Cianciarulo doing a similar thing over that triple—he also rolled and doubled out. Video review determined that, although it was close, the lights had turned off by the time Adam got to the jump. He was not penalized.

“He [Cianciarulo] doesn’t get the 26 points because he didn’t win,” Pellitier says. “Jeremy still won.”

If Martin had passed Cianciarulo for the win by jumping the jump, it would have been different. That wasn’t the case here.

“This wasn’t a ‘throw a dart at the dartboard,’” Pelletier said. “It’s a black-and-white rule. It was actually pretty straightforward for the most part—the teams understand it and they knew what was coming. It was black and white.”