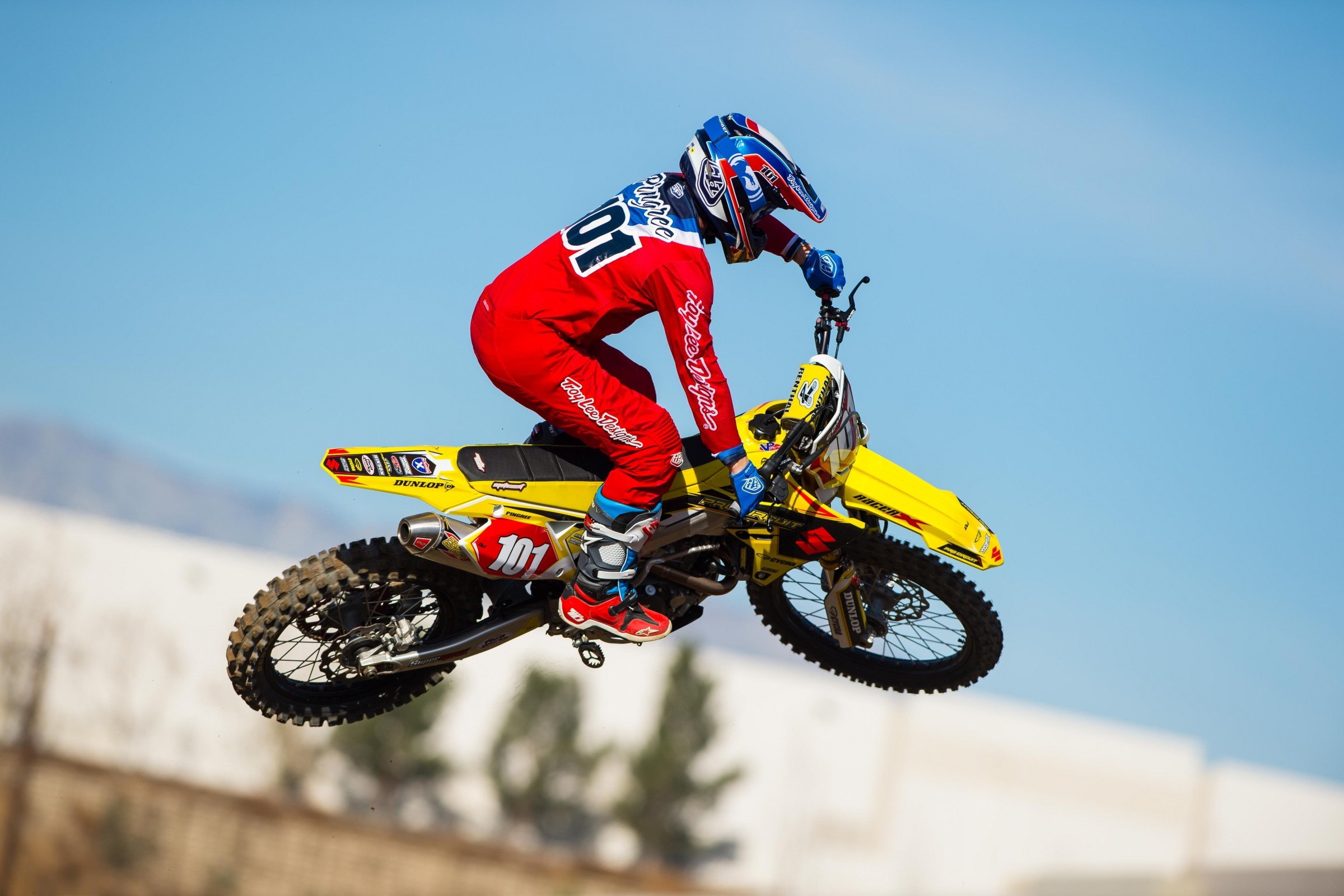 Here is a simple question for you. Your opinion on the matter would be appreciated as well. Why is it that supercross starting gates are all set up parallel with the stadium walls, giving the outside riders almost no chance of getting a good start? Depending on the length of the start straight, bringing the outside gates a couple feet closer to the apex of the first turn would provide far more good starting spots than the current setups.  It the gates were aligned as the base of an isosceles triangle, where the distance from the left-hand gate to the first turn was the same as the distance from the right-hand gate to the first turn, it would no longer matter which side of the doghouse you were on. Obviously, the inside would still give the riders control of the first corner, but a decent jump from the outside could steal that control. This might also reduce the first-turn pileups, as the outside guys would no longer need to cut across the start straight or bonsai the first corner in hopes of pulling off a miracle as opposed to starting 20th. Does this seem like a good idea, or am I missing something?

There are definitely some starts that are fairer than others, but typically the inside of the first turn lines up with the middle of the inside set of gates on the grid. That means that the best spots are from the doghouse to just inside of the middle of that particular side. While this isn’t perfect, it seems to be the safest way to operate such a chaotic sequence. There is one problem with your theory that you missed. If the very center of the start grid lined up with the inside of the turn, meaning the gates right next to the box were headed directly to the inside line in the first turn, you would have riders coming from the outside towards the inside and riders coming from the inside heading towards the outside. Can you see the problem? That’s a recipe for disaster.

As it currently is, if a rider on the very inside can’t slow down enough before reaching the first corner and he hits a rider coming across the front of him, that rider is stood up and shot across the track like a bowling ball. The 250 East Region opener was a good example of this, and Martin Davalos got the short end of that stick. Conversely, one of the safest starts on the national motocross series is Budds Creek, which happens to be one of the most biased gates all summer. The very far left gate is lined up straight to the first turn, and subsequently produces most of the holeshots. But this bias also keeps first-turn crashes to a minimum. It is also a 180 turn, which keeps speeds down. Anyway, SX/MX starts are about as organized and peaceful as a Las Vegas bachelor party on New Year’s Eve, so there really isn’t a perfect way to curtail the carnage.

I hate to bring up two-strokes because it seems to be a beaten horse topic at this point. I just don't understand what the difficulty is with it. Why can't the FIM, AMA, Feld, and MX Sports get together and define simple, reasonable criteria for two-strokes in U.S. MX and SX? I don't care what the numbers are, but set a displacement and weight restriction that will make a two-stroke competitive. Leave it to the OEMs to decide if they want to make a competitive two-stroke. It's obvious that there is a huge market that wants two-strokes. There is no reason to have them regulated out of existence.

The problem is that half the manufacturers don’t make them anymore, and, as such, they don’t want them included in motocross whatsoever. Honda, Suzuki, and Kawasaki gave up on the popular machines, and since they have a lot of pull in the racing world, they have been able to squash any talks of letting them compete on a level playing field. The four-stroke CC numbers were overshot by so far in the original rulebook because nobody imagined small four-cycle engines would get to where they are now. However, a 250cc two-stroke against 250cc four-strokes would be a fair fight. Privateers would get on a level playing field in terms of horsepower, even though it is a more technical and tiring bike to ride. I don’t know anybody who would build a 450cc two-stroke and try to compete in the 450 class, but I’d sure pay the price of admission to see some masochistic bastard give it a go. Hell, I’d even buy him some hand guards for his ensuing suffering.

Here’s the bottom line: If you want to ride a two-stroke…buy one. Between Yamaha, Husky, KTM, and TM, you have some good options. Money talks, Mike. The “Clean emissions” horseshit that pushed four-stroke development to the forefront and squashed the simpler, more efficient two-stroke powerplant is moot with the current fuel injection technology on a two-stroke engine. But if folks keep buying four-strokes, the manufacturers will keep making them.

It seems everyone has an expert opinion regarding what factors are responsible for the attrition of the field of supercross racers this season that has resulted in Ralph Sheheen having a puncher’s chance of qualifying for a night show, so I won’t waste your time with mine. My question is, what do you suppose [Ryan] Dungey and even [Ryan] Villopoto make of this season? All the Ryans ever did were win races and finish on the box. Do you think either one of them feel like they should be out there this year showing the kids how NOT to throw it away while stacking more money in the bank? Villopoto could buy more guns and Dungey could take advantage of the opportunity to rattle off a list of sponsors whom he CAN’T thank...just sayin’.

I know it seems like the “Ryans” would be kicking themselves for not throwing their hat in the ring this year, but that’s coming from our perspective. You have to look at it as though you were standing in their Alpinestars, because the view is different. First of all, these guys have nothing to prove; they’ve won it all, multiple times, and both riders will be mentioned when talking about the all-time greats. They are also filthy rich. Money is not a motivator for either one of these guys at this point. Do you know what Ryan Dungey money buys in Belle Plaine, Minnesota? It can basically buy Belle Plaine, Minnesota…and build a house on it the size of, well, Belle Plaine, Minnesota. You get the point. Villopoto was downright miserable his last year or so of racing, and he seems to have found a new passion for riding and being around the sport without the pressure to win pressing down on him. Dungey hasn’t quite gotten used to retired life yet, but once he finds his next calling, he’ll be fine. The grind and pressure of elite level racing isn’t something he wants back. These two are fresh off the grind and likely enjoying the new, slower pace. Now, if James Stewart would have only showed up for one more comeback….