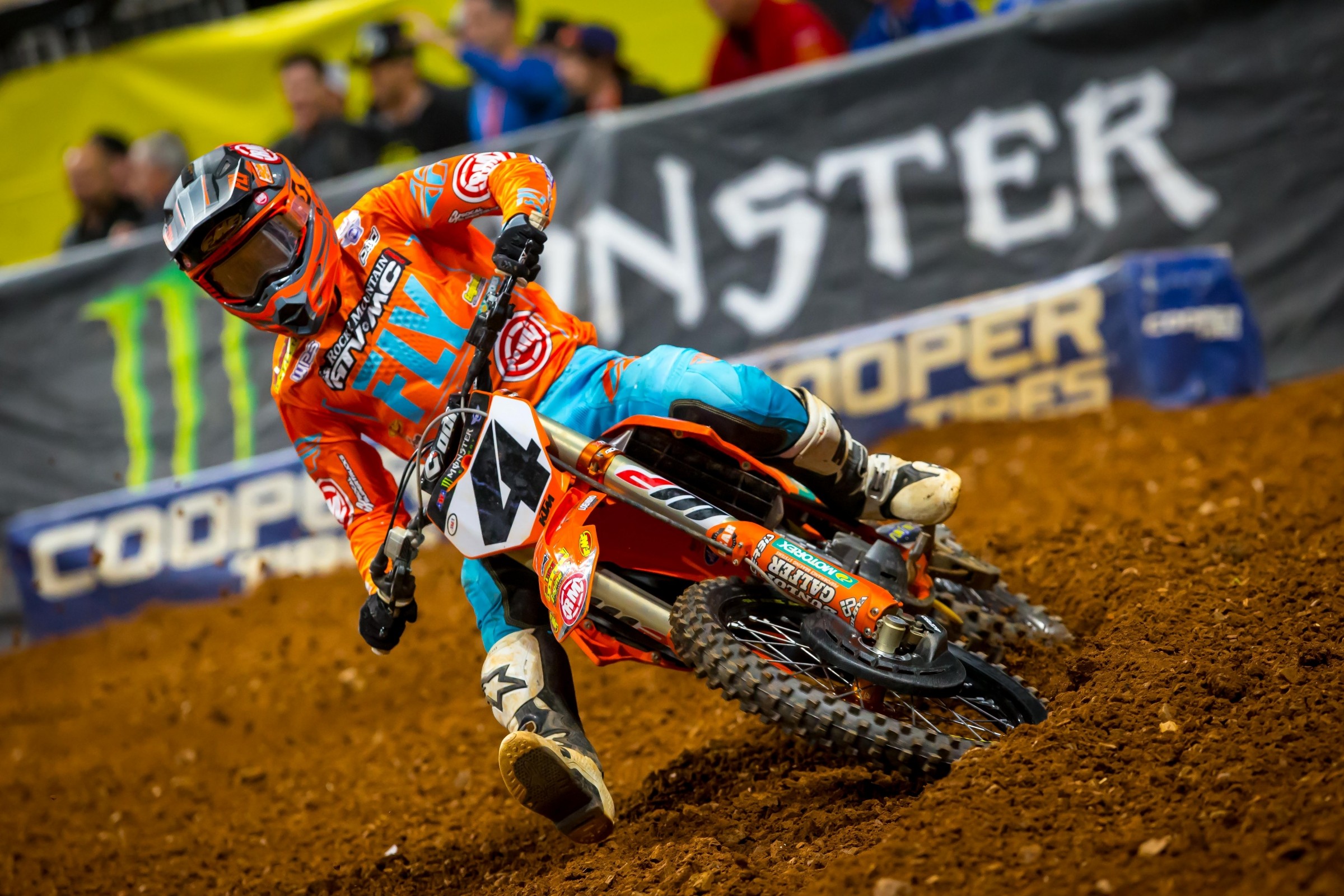 Comment: Baggett made a mistake in a rhythm section in Atlanta and sprained his wrist. It’s sore, but Baggett plans on attempting to tough it out at Daytona.

Comment: Barcia underwent surgery after sustaining a broken hand at Arlington. He’s out for Daytona but is hoping to get back on the bike before the season ends.

Comment: The hits keep coming for Bisceglia, who can’t seem to catch a break after already dealing with injuries earlier this season. Bisceglia will miss Daytona after breaking his hand in a second-corner pileup in the third 450SX main in Atlanta.

Comment: Bogle is in therapy after breaking his humerus and sustaining a small fracture in his L2 vertebrae in San Diego. He’s looking at getting back to racing for the Lucas Oil Pro Motocross Championship.

Comment: There is no current timetable on Enticknap’s return after he broke his pelvis in three places while practicing.

Comment: Grant fractured his right leg during practice in Arlington. He underwent surgery and there is no exact return date set, although last week on Instagram he wrote, “Out for a few weeks and we will be back kickin’ in no time!”

Comment: Hansen hasn’t raced Monster Energy Supercross in 2018 after breaking his foot at the Monster Energy Cup. It’s not clear when he’ll return to racing at this point.

Comment: Noren will miss the rest of the year due to a torn a ligament in his hand, which caused some bones to rotate. He’s also been dealing with some nagging ligament issues in his knee.

Comment: Peick had a spectacular crash during practice in Atlanta after clipping a Tuff Block on the face of a triple. The Alpinestars Medical Mule rushed to the scene to make sure the track, which served as a landing pad after Peick dropped in from low orbit, hadn’t incurred fatal injuries. The Tuff Block was immediately declared dead on scene. Moments later, track crews were forced to bring in several truckloads of dirt to fill the Peick-shaped crater that was left behind. Peick, despite a “bruised heel and banged up shoulder,” shrugged his shoulders, cracked his knuckles, and went about his business. He’s in for Daytona.

Mr. @WestonPeick you sir are a gnarly human ? Happy to hear we’ll be seeing you back on track @SupercrossLIVE ? @JGRMX #ProTaper #SXonFOX #Tough

Comment: Ray may return before supercross is over after dislocating his wrist and rupturing his patella tendon during practice.

Comment: Roczen underwent surgery to repair a shattered hand, dislocated metacarpals, and torn ligaments in his hand after getting caught up in Cooper Webb’s rear wheel in San Diego. He’s looking at returning to racing for the Lucas Oil Pro Motocross Championship.

Comment: Seely crashed in a rhythm lane in Tampa and fractured his sacrum (a triangular bone in the lower back formed from fused vertebrae and situated between the two hipbones of the pelvis) in multiple places, and fractured his pelvis on the left and right side. He underwent surgery and is out for the remainder of supercross. Christian Craig will serve as Seely’s fill-in for the rest of the season.

Comment: Ames is out for the season after a collision with Chaz Braden in Arlington left him with a broken femur.

Comment: Ferrandis had a huge crash in Atlanta when he clipped a Tuff Block on the face of a triple. He broke his arm and several teeth in the crash and may have incurred jaw damage. He’s likely out for the season.

Comment: Hill had a crash in Atlanta and broke his toe. He took the week off from riding, but is expected to return to racing for the 250SX East/West Showdown at Indianapolis.

Comment: Hoeft broke both his feet at San Diego. He underwent surgery and will use the 250SX West Region break to try to heal up.

Comment: Martin sprained his wrist in San Diego and was unable to race the main event. He hopes to be back for the next 250SX West Region race.

Comment: Nichols announced today on social media that he will miss the remainder of Monster Energy AMA Supercross after breaking his humerus again in a practice crash on Wednesday. Nichols also sustained a broken upper arm in a December practice crash.

Comment: Oldenburg, who has been dealing with muscle pain in his upper arm after going down in practice in Glendale, missed San Diego after a hard crash at Oakland. He’s working on being ready when the 250SX West Region resumes.

Comment: Wharton was eyeing a return to racing for the 250SX East Region but was derailed by a practice crash. He’s now working on being ready for the final few rounds of the 250SX West Region.