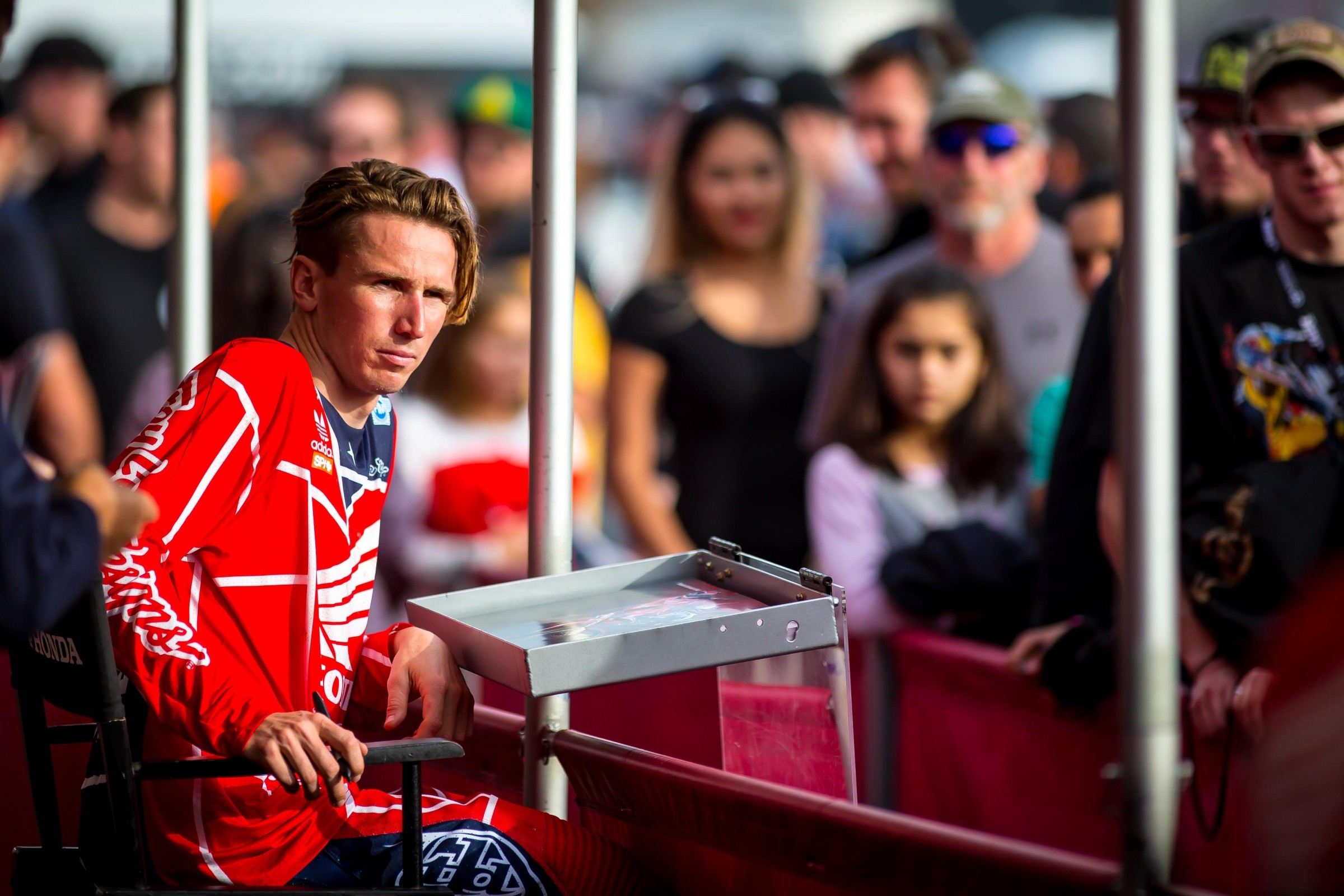 Comment: Barcia underwent surgery after sustaining a broken hand in Arlington. He’s out for the immediate future.

Comment: Bogle broke his humerus and sustained a small fracture in his L2 vertebrae when he was landed on in San Diego. He underwent surgery and as of now there is no timetable on his return.

Comment: There is no current timetable on Enticknap’s return after he broke his pelvis in three places while practicing.

Comment: Grant fractured his right leg during practice in Arlington. He underwent surgery and there is no exact return date set, although last week on Instagram he wrote: “Out for a few weeks and we will be back kickin’ in no time!”

Comment: Hansen broke his foot at the Monster Energy Cup and has yet to race a round of Monster Energy Supercross. It’s unclear when he’ll return to racing.

Comment: Noren will miss the rest of the year due to a torn a ligament in his hand, which caused some bones to rotate. He’s also been dealing with some nagging ligament issues in his knee.

Comment: Ray is likely done for the supercross season after dislocating his wrist and rupturing his patella tendon during practice.

Comment: Roczen underwent surgery to repair a shattered hand, dislocated metacarpals, and torn ligaments in his hand. The injuries were a result of a crash in San Diego, in which his hand got sucked into Cooper Webb’s rear wheel. He’s out for the remainder of supercross, but is expected back for the start of Lucas Oil Pro Motocross.

Comment: Seely crashed in a rhythm lane in Tampa and fractured his sacrum (a triangular bone in the lower back formed from fused vertebrae and situated between the two hipbones of the pelvis) in multiple places, and fractured his pelvis on the left and right side. He underwent surgery and is out for the remainder of supercross. Christian Craig will fill in for him at Atlanta and Daytona.

Comment: Ames and Chaz Braden collided in Arlington, resulting in a broken femur for Ames. He’s out for the season.

Comment: Hoeft broke both his feet in San Diego. He underwent surgery and will use the 250SX West Region break to try to heal up.

Comment: Martin sprained his wrist in San Diego and was unable to race the main. He hopes to be back for the next 250SX West Region race.

Comment: McAdoo sustained a small fracture in his hand early in the race in Arlington. Thanks in part to plenty of ice, he was able to soldier through the pain in Tampa and plans on racing in Atlanta.

Comment: Mosiman will return to racing in Atlanta after a concussion sidelined him for the first part of the 250SX East Region.

Comment: Wharton was hoping to race last week but had to postpone his comeback after getting hurt in a practice crash. He’s out for Atlanta.