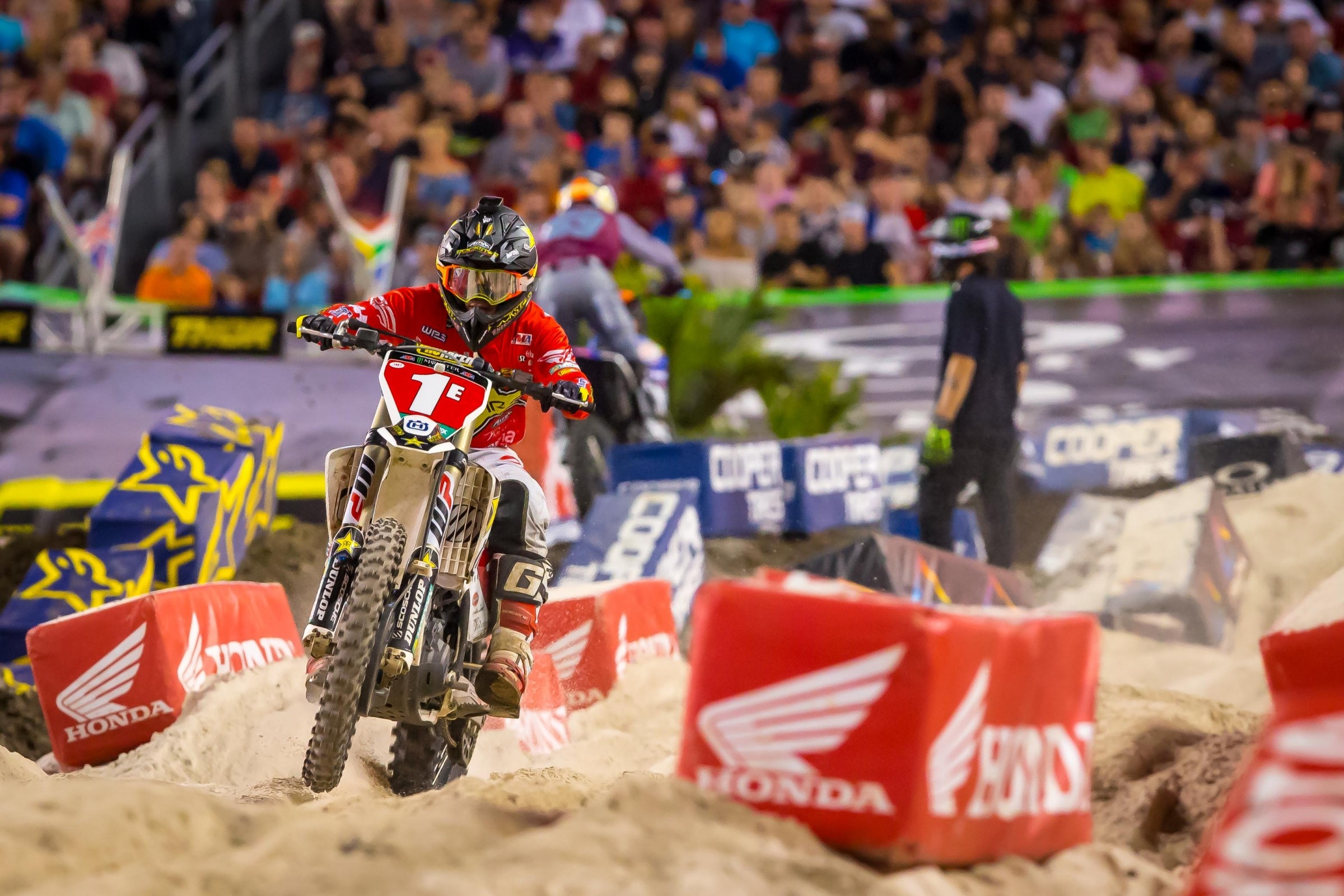 3 on 3 Questions After Tampa

Jason Thomas: It was impressive, to say the least. When you take into account his lack of 450 experience and then look at how the likes of Jeremy Martin fared on the West Coast, this was a whole different level. He really shined all day and night, which is not the norm for this type of mid-season jump. To see a flash in practice or maybe a holeshot isn't uncommon, but to be in the running for fastest qualifier, to pass title contender Marvin Musquin for the heat race win, and then to move through the pack like Weege through an IHOP coffee carafe was just not what I thought I would see. If he can back up that effort in Atlanta, we might be onto something here.

Ryan Sipes: I thought he was incredible. To jump in the big boy class and look like he’s been there for years was really impressive. A lot of guys come in aggressive like that, but they end up looking like a little boy on a big bike that is getting the better of them. I know it’s an odd word to use for dirt bike racing, but he rides that 450 gracefully. He’s smooth with the power, good in the whoops, and got great starts all night.

Another thing that caught my eye was his corner speed. A 450 is so powerful that it can make you lazy. You can cruise through the corners and still make every jump. Hill was the opposite of lazy at Tampa, railing corners and taking some sick lines. I think he’s going to be a really good 450 guy when he makes the jump up full-time.

Denny Stephenson: One word: wow. I honestly don't remember the last time I saw a rookie come out looking that smooth and confident in his 450 debut. As Fro said in the telecast, it looked like Justin had been in the class all season. His quad-quad through the rhythm section and huge leap of faith in the sand made the best in the class look silly. He effortlessly was the fastest guy on the track in his heat and for first five minutes of the main before he fell. And the best part of it all was his words after. Lil Hill completely understood that he attempted to rush the pass on Marvin, explained it perfectly, and will learn from it going forward. Who is this guy?! I only have one problem with it all. How many other talented 250 riders are being held back and stuck in the "feeder series?”

Without going on too long of a rant, the current system is broken. The industry, the AMA, and Feld are burying these kids in this regional 250 Class and it's stagnating the sport, in my opinion. The process and the sponsorship dollars need to change to allow these young riders an opportunity to move up and grow their careers and, in turn, keep the premiere class thriving. Not a single full season rookie in the 450 class this year. That's a problem. Okay, end of rant.

Hill is a badass. His 250 team manager, Budman (Buddy Antunez), is already setting a new JGR standard. And Mons Venus and that Tampa Hooters will always hold a special place in my heart. Damn, the nineties were gin.

2.) The Triple Crown returns in Atlanta. What do you think of the format?

JT: I LOVE LOVE LOVE this format versus the standard variety. Having three main events in each class is so much more content to delve into. We have only tried this one time back at Anaheim 2, but I left thinking we have found an answer for how to spice up any monotony after decades of the same format. Bring it on, Triple Crown.

Sipes: I like the format, but they HAVE to build a better track this time. Anaheim 2 was so vanilla. No passing, no whoops, nothing to challenge guys at all or separate anyone. The track crew must have heard the complaints, as we’ve had killer tracks almost every weekend since. The dirt will be an interesting thing to keep an eye on at Atlanta. Back in the 2000s it was rut city, but then around 2010 it changed to a harder base that dried out and got slick. If it is soft again, look for them to build an easier track that they anticipate breaking down and getting tougher. If it’s hard, they might build an MX vs ATV jump-fest. I’m good either way, as long as it is better than A2.

Stephenson: I don't know, man. When Feld first laid out the format and plans for the Triple Crown, I thought it was the greatest thing since sliced bread and silicone. I argued on our text thread and called the doubters fools for even insisting three mains weren't far better than one long lonely 20-lapper. Then I watched five basic sprints, and by the final 450 main I was uninspired and on my phone reading about the latest pregnant Kardashian. Don't get me wrong, I like change and am excited for Atlanta and round two of this experiment. However, the original format and its buildup throughout the night to the final two main events (250 and 450) is what supercross is all about. The flames. The announcer yelling at the top of his lungs, "Are... you... ready??!!!" Whew. My heart rate started racing just typing that.

3.) Austin Forkner and Dylan Ferrandis got the better of Zach Osborne in Tampa. Anything for the defending 250SX East Region Champion to worry about?

JT: I don't think this was anything to worry about. Zach was in the mix early and looked like he simply wasn't "feeling it." More inexperienced riders may have tried to force the issue anyway and found themselves on the ground. Zach seems to excel when traction is at a premium and he can really use his aggressiveness. Tampa's dark clay base was slippery and very easy to lose traction on. Taking a third place when things aren't going perfectly is exactly what championships are made of. Wins are great and I would be a fool to discount their importance, but titles are usually won or lost when adversity arises. Just ask Eli Tomac and Ryan Dungey.

Sipes: No, not based off of one race. Zach mentioned on the podium that he was happier with the way he rode at Tampa than he was with Arlington. I think Forkner and Ferrandis were just a little faster than him that given night, and it shows maturity that he was okay with that. This weekend could be a whole different story on who has the speed. I thought Forkner showed poise out front, not making any mistakes to give anyone a chance to pass him. I think Ferrandis might have the purist speed out of anyone of these guys, though. He was patient at Tampa, but just waited a little too long. I expect a win out of him soon if he stays off the ground. But no worries for Osborne. He knows he is the most solid guy here.

Stephenson: Hmmmm. You know, Oz looks a little off this season, I think. Maybe. Obviously Zach has gone 1-3 and holds the points lead, but he doesn't have that dominant "put the bike where I want it" confidence he had last season. I mean, we're talking tenths of a second here and there, but I thought he looked a little rusty in his win at Arlington, and then Forkner passed and dropped him in Tampa. Time to push the panic button? Absolutely not. Zach is a mental beast and knows when to push it and take risks and when to dial it back and take a third. He's still the favorite, but I'm curious to see if he rises up and puts his stamp back on the class and these kids with blazing speed and the hammer of Thor. In the 250 Class, sometimes just being the smartest is better week to week than the fastest. Title is still Zach’s to lose—at least for now.