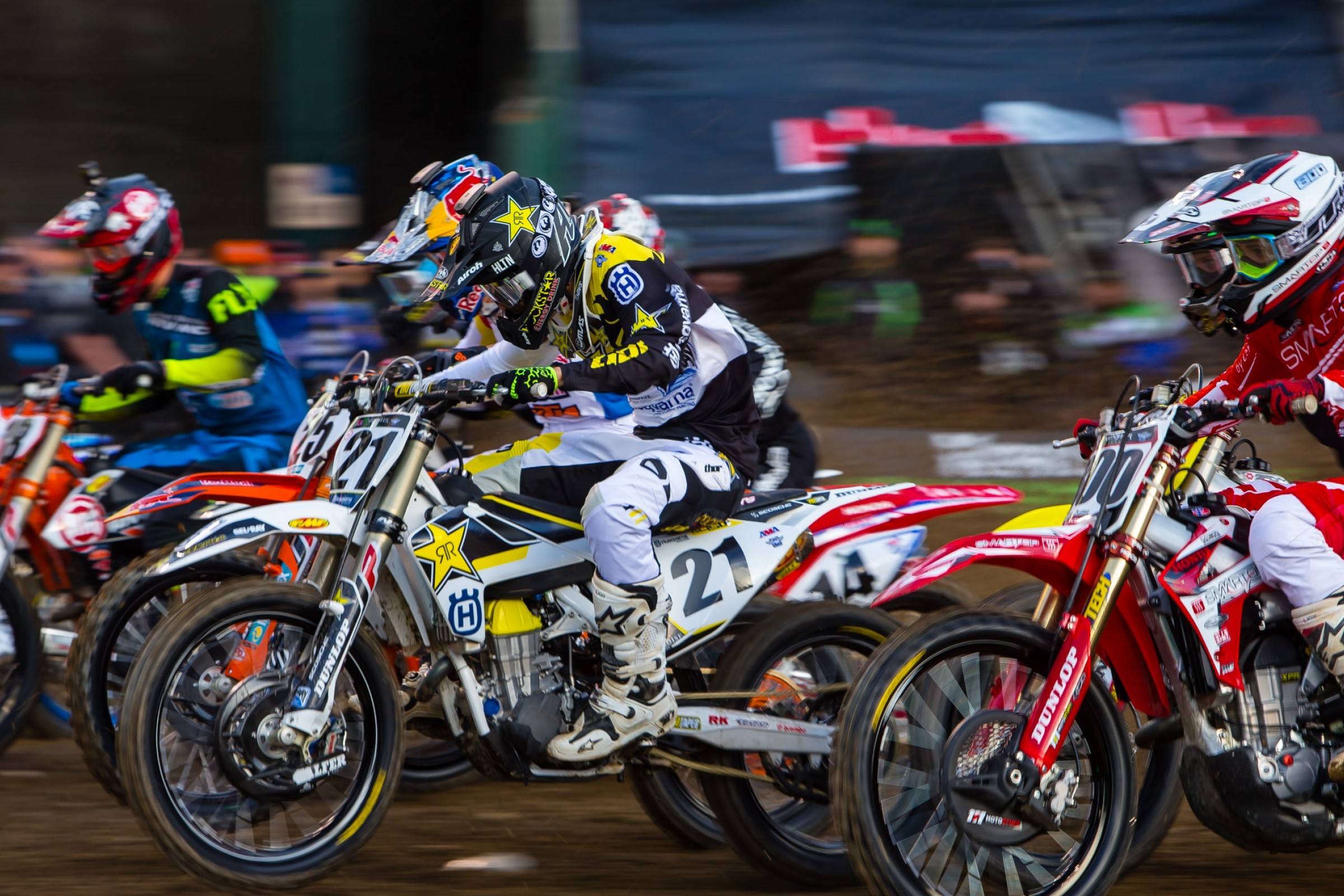 For Cooper Webb, the good news is he walked away with his best result of the year last weekend in Glendale. The bad news? It was an eighth (he was tenth, twelfth, and tenth at the first three rounds). That isn’t a terrible result, especially with so much talent in the class, but when you’re talking about a two-time 250SX champ and a 250 National Champion, you’d expect at least a top-five here and there. We’ll see if he can get things figured out in Oakland. —Aaron Hansel

Aaron Plessinger put some interesting moves on display during—and after—the race in Glendale. First, he moved over on Shane McElrath as the two were going through a rhythm lane, nearly causing McElrath to go down. Then, after winning the race, he channeled his inner James Stewart by dropping to the deck and busting out a Dirty Worm victory dance. Plessinger’s dissatisfaction with finishing second seems to be at an all-time high this year, so don’t be surprised if he rides aggressively again in Oakland. We’ll probably see another victory dance if he wins, too. Who wants to bet it’s The Sprinkler? —Hansel

Is it too early to start talking about the championship? Of course it is, but when it comes to Eli Tomac, what other conversation is there? Right now, he’s got a ridiculously large points deficit—36, to be exact. With 13 races left, what does that mean? Well, for one, if he wins them all, it’d be enough to win the championship no matter what, but that’s not going to happen. A more useful number is 2.769, which is the average number of points Tomac needs to make up on Anderson per round if he’s going to catch him by the end of the season. In other words, on the nights he doesn’t win, he still needs to try to beat Anderson by at position or two. We’ll see if he makes more headway in Oakland. —Hansel

What a turnaround Justin Barcia is having this year with Monster Energy/Knich/Factory Yamaha. In just four races he’s already been on the podium three times, which is something nobody other than points leader Jason Anderson can say. This is by far the best he’s ever started a season, and that includes 2013, when he won the second race of the year (he recorded a DNF and a DNS at the two races after that). The season is still early, but right now it’s starting to look like Barcia is going to be a regular frontrunner. It wouldn’t even be a shocker if he won in Oakland. —Hansel

You know Ken Roczen is going to win a race sooner or later. The only question is, when? Well, it could easily be in Oakland. He’s already been on the podium twice, and had he gotten a slightly better start in Glendale, he may have been in a position to challenge Tomac late in the race. Roczen’s done well in Oakland in the past, too—the last time he raced there, he took second—but he’s also had some bad luck, like the time he cased a triple in 2015. We’ll see what kind of luck he has this time around. —Hansel

While the Oakland-Alameda County Coliseum does host a professional football team (for the time being), the stadium is more in line with a typical baseball stadium design (the Oakland A’s play there, too), which typically means shorter lap times. From 2014 through 2016, the winners average lap time hovered around the 53- to 56-second mark. Last year the Dirt Wurx crew was able to extend the lap times, with Eli Tomac averaging a 1:01.009. We’ll see if they’re able to do the same this weekend. —Chase Stallo

After missing the last three rounds due to a hairline fracture in his shoulder sustained in a crash at the season opener, Troy Lee Designs/Red Bull KTM’s Alex Martin will return to racing this weekend. Martin has spotted a deep 250SX West Region three races, so it will be interesting to see how he adjusts to race pace. Fantasy players should pay close attention to qualifying times. —Stallo

Marvin on the Mend

Marvin Musquin went from not even being able to race in Houston (due to a shoulder injury he suffered in a heat race), to not even being able to finish in Anaheim, to snagging top-five against a tough field on a challenging track in Arizona. That’s serious progress in 14 days. His trainer, Aldon Baker, tells us this shoulder injury is similar to the knee problem Marvin suffered in Lucas Oil Pro Motocross last summer, with stretched ligaments. When that happens, the body goes into protection mode and tries to use other muscles and ligaments to compensate and save the injured ones. During the week, Marvin is working to get those muscles and ligaments to fire properly again, so he can start riding the way he did before the injury. As Aldon says, this is actually as much of a muscle memory thing as it is a strength or pain thing. So far, they’ve made huge progress—can a season-saving podium already be in play this weekend? —Jason Weigandt

Malcolm is Back, Again

Autotrader/Yoshimura Suzuki has extended Malcolm Stewart’s fill-in role with the team through at least this weekend. Originally signed to a “when Justin Bogle returns” deal, the team has found room for a third rider for a second straight week. Malcolm has performed well, so why not just sign him for the entire year? Well, it’s not that simple, as adding another rider costs a lot of money and the team did not budget for a third rider. Still, as JGR team manager Jeremy Albrecht told Racer X in Glendale, they are trying to find the budget to keep Malcolm. “We haven’t finalized anything, but we’re hoping we can get there,” he said. “Suzuki already was willing to do something, so I just need to find some more and we’ll see where we’re at. We’re definitely all trying. We need to figure it out soon, because we already got next week coming. That’s what’s great about this sport. Always next week comes quick. We got to make the decision here. I’d like to say it’s on Monday, but mid-week we should know what we’re going to do.” —Stallo

Through four rounds of the 250SX West Region, we’ve already seen three winners, with Aaron Plessinger serving as the only two-time victor. Adam Cianciarulo has been a threat for wins and a multiple podium performer. GEICO Honda rookie Chase Sexton is poised for a breakthrough victory. His teammate Christian Craig is a former race winner and has already been on the podium this year. We’ve also seen race-winning speed from Mitchell Oldenburg. And, maybe, just maybe, Justin Hill will break out of his early season slump. We’ll see if the Bay Area gives us another rider in the winner’s circle. —Stallo