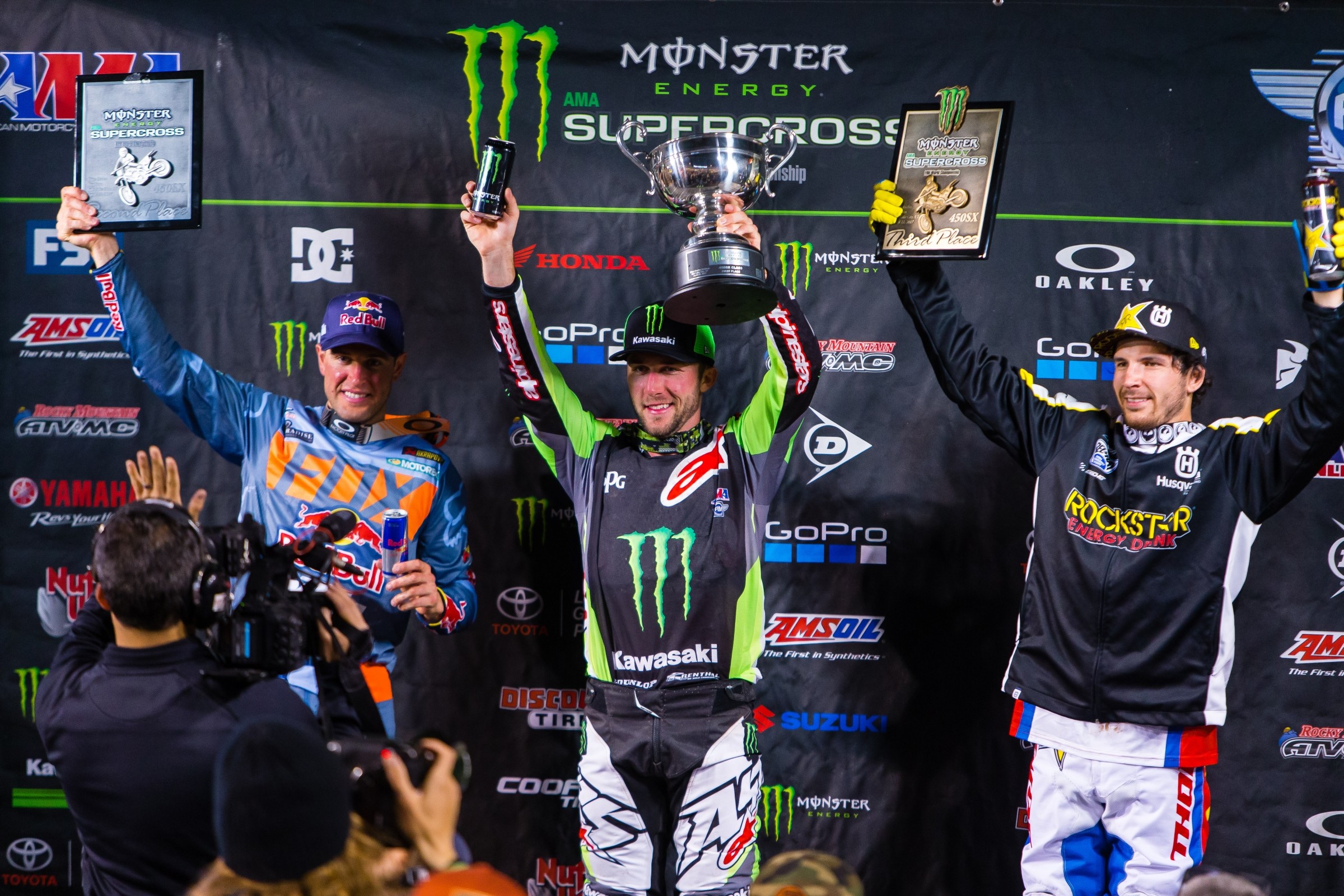 There was just one race last year with a predictable outcome: the first one. Ken Roczen exploding out of the gate on his new Honda and winning Anaheim 1, with Ryan Dungey and Marvin Musquin giving chase, would have been an easy bet in Vegas.

After that, the script was crumpled up, torn, shredded, and burned. The ashes were buried at sea. The 2017 season turned into an emotional rollercoaster, with both 450 titles going down to the final round. This has not happened since 2011, when Ryan Villopoto took both titles to the finale, in a season so good Feld Motor Sports hung banners from Sam Boyd Stadium proclaiming it to be “The Greatest Season in Supercross History.”

Now 2017 is in the mix for that honor. We’re usually loathe to fill web space with boring “year in review” drivel that tells you what you already know, but this season is different. When New Year’s rolls around, pour one out for ’17. This racing deserves a toast, and here it is.

Narratives didn’t last long in 2017. Roczen crushed Anaheim 1, but thoughts of dominance ended the next weekend in San Diego, when he and Dungey went toe-to-toe (and head-to-head) the entire way. It looked like a two-rider slug fest was on order, until Kenny’s Anaheim 2 crash. It was stunning, but it only seemed to set up another predicable circumstance: Ryan Dungey is most consistent, and wins titles. Remember James Stewart crashing out of Thunder Valley? Eli Tomac crashing out of Thunder Valley?

Roczen’s crash left a dark cloud hanging over the series, and it stayed there. It literally kept raining and raining in Southern California. Eventually, the state’s long-running drought had been cured. Seriously, there was so much freaking rain over the winter that the Google Maps image of the state actually changed from predominantly golden to predominantly green.

Green begat green. Eli Tomac suffered huge arm pump early in the season, struggling with his bike while generating 5-6-8 finishes. He said his arms, at Anaheim 1, were “a mushroom cloud.” If this kept up, he would surely bolt from Monster Energy Kawasaki when his contract expired at the end of the year. His crew chief, Mike Williamson, had one week to solve the problem or Tomac would produce an icy stare strong enough to rebuild the polar ice caps. Williamson had some ideas, but rain forced Tomac away from the Kawi test track and over to Arizona. The Cali rain turned out to be, as a rider once said, “A blessing in the skies.” The Arizona tracks were more beat-up than the pristine California tracks. They were chewed up and nasty. Eli tried his new settings there and got comfortable on gnarlier tracks—tracks like the ones they were actually racing on, which had been lashed by rain.

With new settings, Tomac blew everyone’s doors off at round four in Glendale, Arizona. Blame it on the rain.

Next sign that this year wouldn’t be normal? Post-race after Glendale, Dungey made a rare emotional rant called #ThereWasNoCrown. When Dungey left Anaheim 2, it seemed 99.9 percent certain he would win the title. Media member Chris Cooksey asked the riders if hearing this kind of talk fired them up. Of course, they all misinterpreted the question and took it as, “Were you fired up to see Roczen get hurt?”

Dungey got really serious and very angry. He also said, as far as people handing him the crown the previous week, “There was no crown.”

#ThereWasNoCrown became the theme of the season. Because in Oakland, Tomac did the impossible, coming from way back to track Dungey down and win the race. No one overwhelms Diesel Dunge late in a race!

Then Tomac crashed and finished way back the next weekend in Arlington. The everyone-crashes-and-Dungey-wins narrative was about to return, until Kawasaki revealed Eli’s front brake had broken, which actually caused the crash. Oh, and Dungey got a bad start and only finished fourth. Musquin won his first race.

The next weekend, Dungey had the home-state mojo for Minnesota, but unlike his scintillating victory over Ryan Villopoto there a few years earlier, he finished third behind Tomac and Musquin. Something was in the air. Even Dungey’s Atlanta victory didn’t silence concerns, as Tomac nearly caught him from behind again.

In like a lion came Eli Tomac, winning Toronto and Daytona. He also won Indianapolis and Detroit. What do you know? A clean sweep of the month of March!

Since Tomac made that March routine, let us give 250SX West some love. Those boys raced in January and February but under the considerable shadow of the crazy 450 class. You want unpredictable? Consider that when the season began, a lot of people were picking Austin Forkner, Aaron Plessinger, and Jeremy Martin to battle for the championship. Instead, Shane McElrath and Justin Hill took control. McElrath had never won a race prior to ’17, he won the first two. Hill had always been fast but usually inconsistent. He was the most consistent 250SX rider in 2017, and spent the month of March hanging out with a big points lead.

St. Louis ain’t no saint to the supercross riders. The Dome at America’s Center wasn’t good enough to keep an NFL team, but that building had better stay on the SX schedule because it always produces crazy moments. When the race first appeared on the supercross tour in 1996, Jeff Emig ended Jeremy McGrath’s perfect season. It’s been wild ever since.

This time we had #lappergate. Dungey was frustrated with Reed’s aggressive riding in a heat race and said so in his TV interview, so Reed, ever the crafty one, became very difficult to pass when Dungey needed to lap him in the main—the first race in a while where Dungey appeared to be running Tomac’s pace. Throw Chad Reed into a tense title picture and you’ve got straight fire. The internet was burning over the next few days!

Reed continued to wave his magic wand, attending the post-race press conference the next weekend in Seattle to explain that he was okay with Dungey’s reaction because he understands that Dungey is under major championship pressure. Somehow Reed got to play the victim. Pure sorcery there, and really, can you have a nail-biting supercross title fight without some Chad Reed involvement, one way or another?

The Seattle race was insane and dudes were crashing everywhere, including Tomac, but he picked it up to gain a few more points on Dungey. Seattle’s CenturyLink Field is engineered to be loud, and those results were tangible with each Tomac and Dungey pass. Marvin won another race, Tomac was fast, and Dungey became the grinder, reeling off another tough fourth through traffic. The points were tied. The crowd was both loud and tense at the same time. This was the magic supercross was made for.

The next week in Salt Lake City, Tomac marched from nearly last to track down Dungey and grab the win. He had officially taken sole possession of the points lead. Finally, the new narrative had emerged: Tomac was taking control of the sport.

Then he crashed in New Jersey. With the title back in play for Dungey, Musquin was left with a very difficult decision to make.