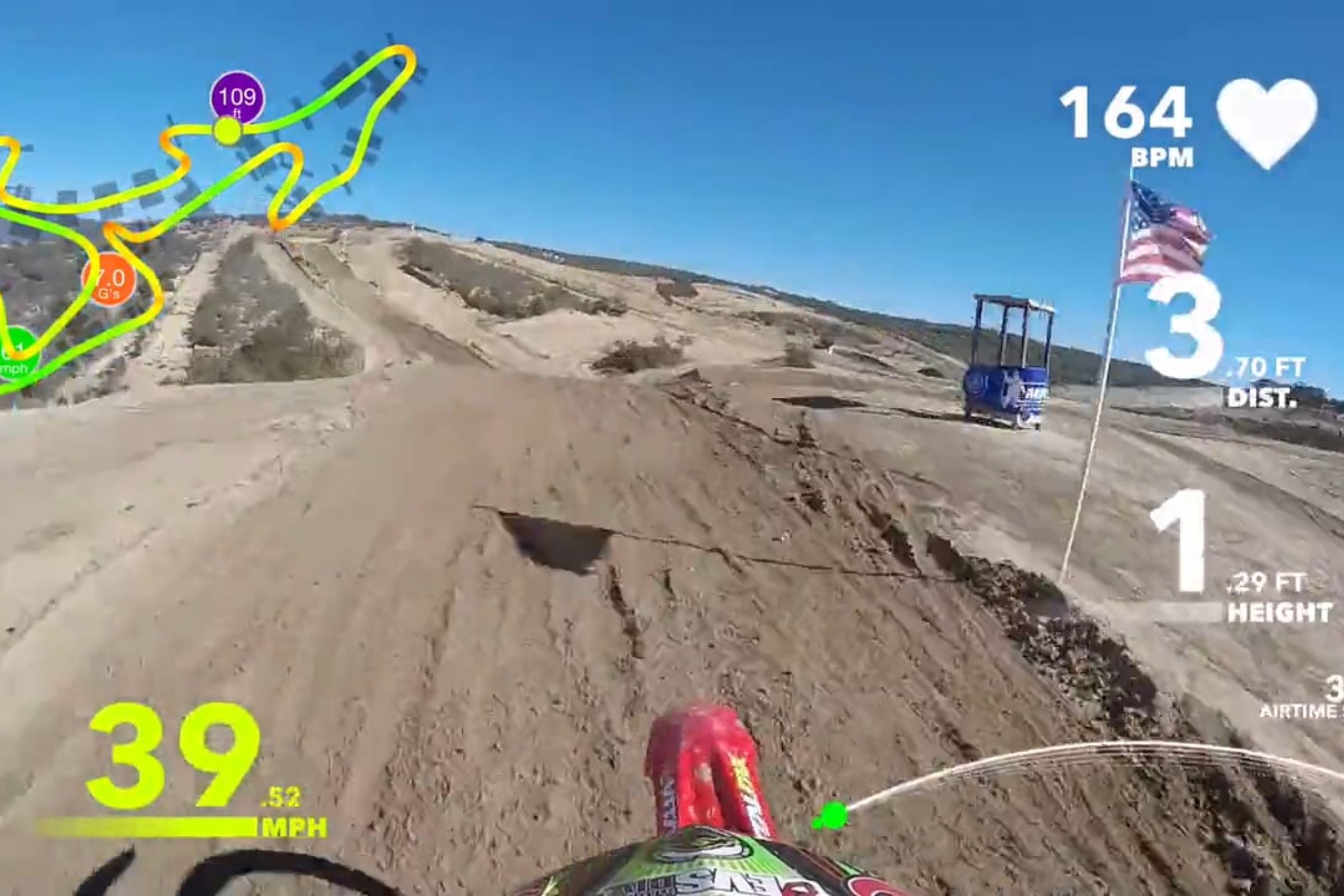 This idea that needs to become reality. Dirt bike racing is unfortunately a sport that looks much easier than it actually is. We all know it as one of the most physically demanding tasks on earth, but to the casual viewer, it looks like—as you’ve not doubt heard—the engine is doing all the work.

Further, the sport doesn’t offer much in the way of in-race analysis, because no one has radio communication with the riders, there aren’t timeouts, and teams, riders, and trainers keep info very close to the vest.

Big data might be coming to moto, though. It’s actually already here courtesy of GPS devices like LITPro, which we’ve featured data from on this website and in the pages of Racer X Illustrated. LITPro is a device that mounts to a rider’s helmet and offers super-precise GPS tracking—it can tell the difference between two lines in a corner just inches apart, and which line was faster. LitPro can also connect to biometric data such as heart rate monitors. Two years ago, I stopped by the Baker’s Factory in Florida and saw LITPro’s Michael Ford working with Marvin Musquin and Jason Anderson, tracking line choice, speed, and heart rate in real time. He stood next to the track with an iPad, and we watched them ride with a layer of info unheard of until this point. (Also, Siri announced each rider’s lap time, which was hilarious.)

LITPro has slowly integrated into TV coverage of Monster Energy Supercross and Lucas Oil Pro Motocross ever since (and then Garmin added another layer in the Nationals this year by incorporating a helmet camera into the GPS unit). None of the info was relayed live, though; instead data would come from practice or the previous moto.

Sounds like the folks at Feld Motor Sports and Fox Sports used the Monster Energy Cup to experiment with live analysis. Fans could view rider heart rates live on the Sam Boyd Stadium big screen, and the event served as a test to see if it could work on the TV coverage. Imagine viewing each rider’s heart rate in real time during the show!

At Saturday's showcase, data compiled by LITPro from Musquin's helmet was channeled through the stadium's WiFi network to an FS2 production truck, which projected the statistics on the stadium's big screen located above the track's split starting gates. Following the successful test run, there is a strong likelihood that the analytics could be integrated into Monster Energy Supercross broadcasts as soon as January for the start of the 2018 campaign, said Michael Ford, co-founder and president at LITPro. Just as a Major League Baseball telecast can incorporate Aaron Judge's exit velocity and launch angle on a 450-foot home run into its production, Monster Energy Supercross may be able to do the same with Musquin's heart rate data over a critical portion of a race.

No wonder someone from the press actually asked Marvin Musquin a question about his heart rate after the event. The data was actually available as a talking point.

Marvin, congratulations. In terms of your biometric data, you were able to keep your heartrate pretty consistent between in a range of 170 to 180 beats per minute. With the one mil on the line, how were you able to stay so calm? Can you attribute that to how hard you trained in the weeks leading up to the event?
Musquin: The effort was the same on the third moto than the first and second. That’s why the heartrate was the same. I don’t think it would have changed anything. The third moto was the exact same moto as the second one where Jason was behind and pushing really hard. I just wanted to keep that little gap and be consistent. It was pretty easy to mess up that rhythm section we were talking about. Jason was really fast, too, behind me. So, like Jason said, we haven’t been riding much after the outdoor season. We all took a break. The heartrate, the breathing was pretty high, even though it’s only 10 lappers. We were pushing super hard. Could definitely feel the breathing was really high.

If the data does become a talking point for the public, there are some key things to note. On that day at the Baker’s factory, Ford explained that every athlete’s heart rate is different, and making direct comparisons from one to another isn’t valid. One rider could operate at a high heart rate yet not feel as winded as riders running at a lower heart rate. That day in Florida, I remember Musquin’s rate was consistently higher than Anderson’s—but I was told that’s just how it works for him, and it didn’t mean he was in worse shape or experiencing more fatigue. Everyone’s body works differently.

What the heart rate data will do, though, is create a profile for each rider. Watching a rider’s heart rate on lap three and comparing it to lap 12 of a supercross main could be very interesting. If you rider usually operates at 170-180 and suddenly goes 190, you know he’s in trouble.

The Forbes story marvels at Musquin’s ability to keep his heart rate in check despite having a million dollars on the line, but I’d venture to guess that when a rider is out there in the moment, his heart rate won’t jump dramatically because of a payday. The physical work takes care of that, and as Marvin said, he was doing the same physical work in all three mains. But I’d bet his heart rate was higher before the gate dropped for race three than it was for race two. We had LitPro data hooked to Shane McElrath as Loretta’s years ago, and his heart rate spiked the moment the card turned sideways, before the gate even dropped.

Also, trainers say that even the track surface has a big impact. Slippery tracks require less aggression with acceleration and breaking—so heart rates are lower.

Many, many talking points can be gleaned from this data—in much the same way TV analysts and armchair quarterbacks do in other sports. This is an idea that’s time has come—let’s hope it happens.