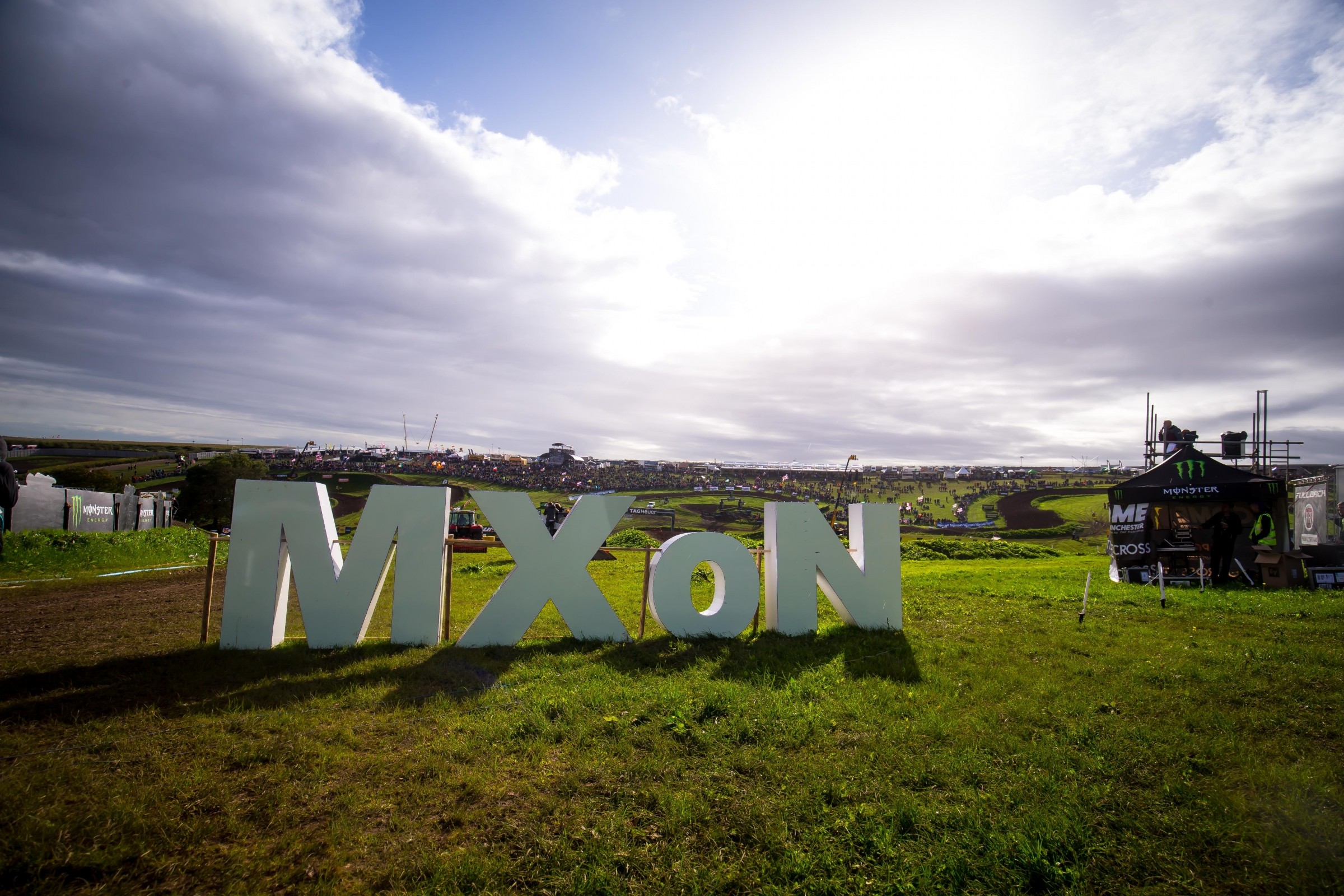 Welcome to the Racer X Race Day Feed, your one-stop shop for the Motocross of Nations at Matterley Basin. We’ll be updating this post with news, notes, and results from today's races, so be sure to keep checking back throughout the day. You can also follow Racer X on Twitter, Instagram, and Facebook to stay up on all the action.

(Note: All updates will run top to bottom, starting with the morning report and going through the qualifying races. So, make sure to scroll down for the latest.)

The time for talk is nearly over--the time for racing is here (and then the talk will resume). The 70th edition of the Monster Energy FIM Motocross of Nations, held at Matterly Basin in Winchester, England, greets three-rider teams from nations around the world in search of the Chamberlain Trophy.

Here's the report from yesterday's qualifying races, which were largely drama-free besides a scary last-lap crash (with a lapper) from England's Max Anstie, but luckily he got up and was okay. Yesterday's final standings indicate this race will be as close as expected--France and the Netherlands tied with four points, Australia had 6, USA 8 and the Brits had 9. Each team has strengths and weaknesses this year, and you just know luck will become a factor and the drama will increase dramatically now that it's all on the line.

Plus, British weather has finally come into play, as rain came down after the qualifying races to soak the track overnight. Today's forecast is clear, but the track was muddy in this morning's warm-up. Will it stay slick? Will it dry out? This could be as big an X-factor as any.

Well, the plans of a clear forecast for the rest of the day didn’t pan out—a slight drizzle dominated this moto and the track was already muddy from last night’s rain. That made a start even more critical, and the Netherland’s Brian Bogers, Brit Max Anstie and Frenchman Gautier Paulin all battled for the Fox Holeshot. Bogers collected the award, but Anstie was quickly around and into the lead, sending the British fans into a frenzy! Anstie then rode the race of his life up front, literally, saying “That was the greatest thing I’ve ever done in my life” after collecting the checkered flag with a huge moto win for the home team.

But there was bad news along with the good for the Brits, as Tommy Searle blew and engine and finished 37th. That’ll be a drop score for that team.

Team USA had it even worse. Zach Osborne was given the better, inside gate, and started around 10th. Cole Seely was right around him in 11th . Seely started struggling in the mud and then crashed. He got back up in 37th and moved to 31st, but it then became clear the rear suspension of his Honda has collapsed. He tried to continue but with his rear shock completely bottomed, it was no use, so he pulled in. Osborne, meanwhile, didn’t make the rapid progress he made in yesterday’s MX2 qualifier. He was 10th most of the way, got near 9th at then end, but finished 10th. Coupled with Seely’s 38th, it’s not looking good for Team USA.

While Anstie went on to win relatively unchallenged, the battle for second got heated at the end, with Tim Gajser overhauling Paulin to take the spot. Valuable point lost for France there, but the team is still looking good, early, to win a fourth-straight Motocross of Nations. Paulin’s third was solid, and the team’s big question mark, MX2 fill-in Christophe Charlier, was a decent 14th on his 250F.

Team Netherlands is the only other team with two solid scores in the moto, as Coldenhoff got the start and held on for a decent eighth. Brian Bogers was 12th on his 250—and that team will bring out Jeffrey Herlings in the next two motos. Australia had a great, great ride from Hunter Lawrence, who was fourth overall and by far the best 250 rider. But Dean Ferris went down early and found himself outside the top 30. He fought back valiantly for 22nd, a score that could end up counting if things turn sideways the rest of the day. Also in contention are the Swiss, which grabbed fifth from Arnaud Tonus and 18th from Vallentin Guillod. Belgium had a seventh from Jeremy van Horebeek and 17th from Brent van Doninick.

With some very unofficial math on our part, France has 17 points, Netherlands has 20, Switzerland has 23, and Australia 26. The Brits have 38 but Searle’s 37th is going to get thrown away—the home nation and many others are still in contention, but they cannot afford anymore mistakes, especially Team USA.

France’s Romain Febvre, Brit Dean Wilson and Dutchman Jeffrey Herlings battled for holeshot, but Wilson bobbled and went back to 10th. This set up a Herlings versus Febvre battle for the lead, and Herlings locked it down for a few laps. Febvre found his pace, though, and started pressing Herlings, and then Herlings crashed, shorting the landing of a jump and sliding out in the mud. Febvre took the lead—the French really step up for this event lately.

As proof, his teammate Christophe Charlier—originally thought to be a big weak link on the team since he hadn’t even raced motocross this year (he switched to the EnduroGP Series)—found himself in the top spot out of all the MX2 riders. The French looked strong, matched by the Australians, who had Kirk Gibbs running a solid third early.

As for Team USA, hopes went south again when Thomas Covington crashed twice early and found himself way, way back. He never gave up and slithered from outside the top 30 into 22nd place, but combine that with Seely’s DNF in moto one, and it’s not looking good for the Americans.

Things started getting interesting when MX2 combatants Hunter Lawrence, from Australia, and Team USA’s Zach Osborne, started battling. They passed each other multiple times as they raced their way toward the front. Lawrence passed Osborne, Osborne got back by and was fifth, then bobbled, Lawrence was back around him and then really caught fire, raging all the way to third—around his 450 teammate Gibbs and Italian Alessandro Lupino. But with two laps to go, Lawrence woke from his dream ride when he crashed, dropping from third to eighth. Those was a costly, costly loss of points for the Australians.

Osborne, as expected, never gave up and kept pushing to the end. On the last lap, he passed Lupino to take over third, first 250 in the moto. But that 22nd from Covington hurts.

Up front, Herlings found his groove halfway through the moto and put together a huge scrub/leap to get next to Febvre and take the lead. He set sail from there. His moto win, combined with ninth from his 250F teammate Brian Bogers, keeps the Dutch in contention. France grabbed second from Febvre and Charlier was seventh, second-best of anyone on a 250. Charlier’s 14-7 is exactly what France needed, if not more.

The Brits are clinging to hopes, Wilson was a decent eighth, and Tommy Searle found himself way, way back but battled from outside the top 20 to net 15th. They’ll need another monster ride from Anstie in moto three and some bad luck from others to make it happen for the home fans.

Herlings now has two-straight moto wins at the ‘Nations, dating back to a third-moto win a year ago. He will need another to try to lead the Dutch to their first-ever 'Nations triumph. A year ago, they lost to France by one point.

France entered this one with a solid points lead, needing only to not screw things up majorly to grab a fourth-straight ‘Nations victory. They didn’t mess up—Romain Febvre got a great start and Gautier Paulin was right behind. With that, they just needed to stay upright.

Max Anstie, meanwhile, continued the race of his life by grabbing the Fox Holeshot and leading again—attempting to follow his magical first-moto triumph. Febvre was there pressing him this time, and then at the halfway mark, Anstie finally bobbled and crashed, in basically the same spot where Herlings went down while leading moto two. With Febvre in the lead and Paulin fighting around fifth, the French had the event on lock. Australia’s hopes were dashed when Dean Ferris got a bad start and struggled, and then Kirk Gibbs went down early and was running around in last. While Anstie leading for Team GB was big, Dean Wilson was just inside the top ten, which would not be enough to off-set Tommy Searle’s DNF-15 in his MX2 motos. The only player left was the Netherlands, but their two riders, Herlings and Glenn Coldenhoff, were each behind France’s two riders.

As for Team USA, another bad one. Cole Seely started fifth and showed a brief flash but started going backwards, and then he ended up in the pits again with broken rear suspension. Two DNFs for the same problem for Seely on the same day. Wow. Thomas Covington struggled and took 17th.

Anstie gave the home fans something to cheer though when he ratcheted the pace back up and went after Febvre again! The Englishman hung it out and repassed Febvre with a daring move. Jeffrey Herlings was lurking in third, and then he forced his way past Febvre to take second. Febvre, with a giant lead over third and wanting to take no chances, dove into the mechanic’s area for fresh goggles. He came back out, still in third. On the last lap, Herlings kept closing on Anstie in hopes of making a run for the win, making for a tense finish, but the Briton held on to make it happen, taking 1-1 scores in his two motos.

Overall, France had an easy win, the Netherlands was second for the second-straight year, and the Brits finally got to the podium for the first time since 1997. Team USA finished ninth.