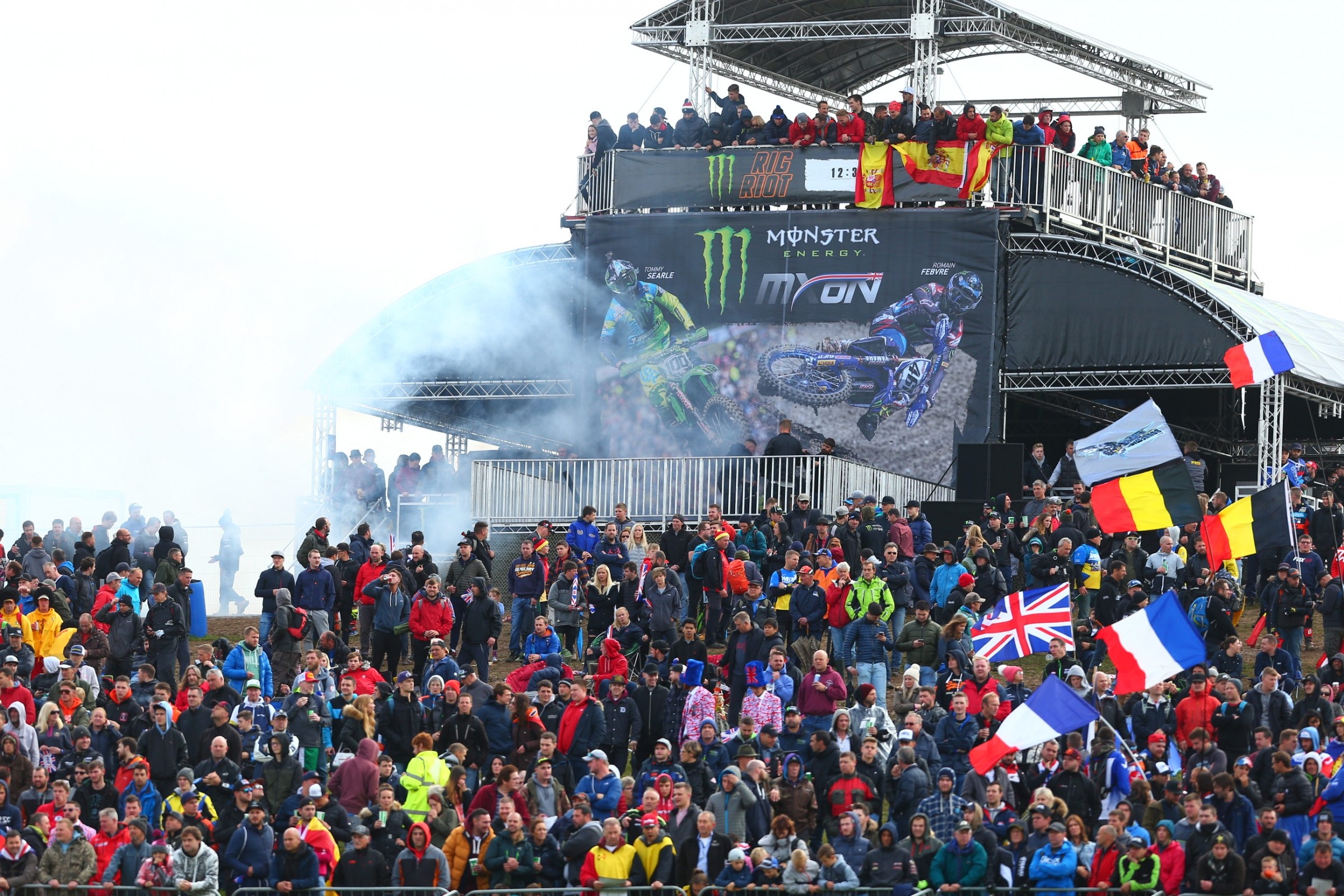 The British climate decided to keep the hefty crowd at Matterley Basin guessing today; much like the formbook and potential for ownership of the 71st Motocross of Nations. Luckily rainfall decided to stay away from this immaculate racing layout until late in the afternoon and by which time Tim Gajser, Zach Osborne, and Jeffrey Herlings had claimed victory in their respective qualification heats. France, Holland, Australia, USA and the hosts will enjoy the first gate picks in the BMX-style new start here in southern England tomorrow. In the meantime, and until the countdown of the three motos that will officially close the international motocross season, here is what we gleaned from MXoN Matterley.

Of the three Qualification motos it was the MX2 chase that had the crowd over-working the air horns and getting active with the flags. 2016 MXGP World Champion Tim Gajser controlled MXGP from the start and winner of five of the last six rounds of MXGP this year, Jeffrey Herlings, was even more comfortable on the Red Bull KTM in Open but MX2 thrilled. Rockstar Energy Husqvarna’s Zach Osborne has always tended to enjoy good support in Europe. He was/is a popular, amusing, and all-action kind of rider that fans are drawn to watch. His open and humble personality also helped his profile. After his last Grand Prix appearance in 2012, and to the many here that would have seen some of his speed through British Championship success, his pursuit of Australia’s Hunter Lawrence explained much of his fantastic progress in 2017. Osborne set-off from a diabolical 37th gate pick for Team USA and by the time he increased his rhythm to move through to second position—past the KTMs of Jorge Prado and Brian Bogers—he faced a nine second gap to the Suzuki-mounted teenager. Osborne’s intensity and sheer corner speed was on a different level to anything European audiences had previously witnessed and despite a good attempt at resistance Lawrence could not prevent the Husky man from seizing control on the last lap. It was an inspirational charge and even more impactful than his surprising second place finish in qualification for the 2008 Nations on a YZ450F for Puerto Rico. The Motocross of Nations witnessed the strange sight of a European crowd cheering a Team USA member like one of their own. Osborne called Matterley Basin one of the best tracks in the world and one of his favourites, and on this kind of form he could well ape Antonio Cairoli’s 250 moto win from 2006 (a feat that the current MXGP World Champion, a decent third today in MXGP behind Gajser and Gautier Paulin for the reigning champs, ranks as one of his finest races).

2. Herlings odds-on for a chequered flag

Jeffrey Herlings has a weird relationship with Matterley Basin. It was here at the 2012 British Grand Prix that the then-18-year-old played the pantomime villain with local hero Tommy Searle. The pair were duking the MX2 championship that year and Herlings’ outspoken behaviour in his first season as a title contender (just his second in Grand Prix) meant that his status dropped to the point where fans were throwing food at him in practice. He lost to Searle that weekend. Three years later he was defeated again by the extravagant form of Valentin Guillod: a result that rankled the Dutchman in a troubled campaign. Finally, last summer, he owned the British stage with a 1-1 in his last appearance on the 250 SX-F. Twelve months after Herlings dazzled on his big bike debut at the 2016 MXoN he was again superlative and rode untroubled to the kind of victory that not only falls perfectly in line with his Grand Prix form of the past two months but also that indicates he will be very hard to beat on Sunday. If the recently-turned-23-year-old can turn in another double win on the English slopes then this would be the bedrock of the Dutch pursuing a milestone grasp of the Chamberlain Trophy. With Brian Bogers third in MX2 and Glenn Coldenhoff looking for a bit more from 10th spot in MXGP then the Netherlands are currently the hottest prospect. Behind Herlings then Thomas Covington made a satisfactory debut on the FC450, just dropping out of the top five and down to seventh in the last five minutes. The MX2 star, and one of three Team USA rookies, commented that he needed to relax a little more to find a better rhythm and will make some set-up tweaks for Sunday.

The Grand Prix paddock has been awash with rumours about Stefan Everts’ factory Suzuki set-up with the Japanese allegedly pulling the plug on both MX2 and MXGP efforts for 2018. An official announcement on the whys and hows is likely to be made in the coming weeks, possibly around the EICMA bike show in Milan in November—Europe’s biggest expo. The decision is puzzling. The crew fought for the MX2 title with Jeremy Seewer this year (even if they continued to search for MXGP spoils, only taking one victory in two seasons). At Matterley their competitiveness was again evident. Lawrence almost ruled MX2 two weeks after winning his first GP moto and having taken two podiums from the last three rounds. In Open Jeremy Seewer—the victim of quite a few naïve judgements about his size and prospects for the MXGP class on account of reaching 23 and having to leave MX2 for 2018—was quick and solid on the RM-Z450 to sit in third position and help the Swiss to sixth in the gate. It would seem all is not lost for yellow but the apparently withdrawal—a seismic move in Grand Prix—must be down to another agenda. Lawrence is already linked with Giacomo Gariboldi and Honda for 2018 and a GEICO Honda saddle for 2019. Seewer is looking for options and could even run for Suzuki in the US.

Routinely rated as one of the best tracks in Europe, Matterley Basin—a circuit on private land that is only used once or twice each year—was in pristine condition when teams, riders, and staff began to arrive on Thursday. Designer Johnny Douglas Hamilton had poured over 1,500 hours into the site during the summer months after filling the role of custodian for his creation (that slots into a stellar portfolio with Gore Basin on the Isle of Wight and temporary constructions like the Sun City trajectory in South Africa). A new downhill second turn and tight third corner not to mention a tabletop that afforded the public to appreciate what a dirt bike looks like from underneath were just some of the modifications to the course that had originally been built for the 2006 Nations and has become the home of the British GP; in the passionate grip of DRT team owner Steve Dixon. Hamilton’s priority was for flow, and the spectacular and it seemed to tick boxes everywhere. Fast, rutty and with enough choice to allow variance on a lap-time that dragged to two-and-a-half minutes, it gathered praise both sides of the fences. Youthstream will announce RedBud as host of the 2018 edition tomorrow morning and the standard has been set.

5. Where will lightning strike?

France, winner of the last three editions, will head onto the downhill drop startline first after Paulin (second), Romain Febvre (second in Open and competing at the track where he celebrated his maiden moto win on the YZ450F in 2015), and Enduro World Championship rider Christophe Charlier (eighth in MX2 but a former moto winner in the GP class) also in good shape for a fourth success. But where will the shock come? From Jason Anderson’s amazing KO last year, Justin Barcia’s locked front wheel at Lommel, Max Anstie’s horrible accident at Ernee in 2015, Shaun Simpson’s derailed chain that dashed Britain’s podium hopes in Latvia in ’14; there is usually some freak occurrence that decides the order of the champagne bottles. Anstie was the standout performer for the Brits but was almost the course of calamity again as a strong final lap push to overtake Cairoli for third led to a collision with a backmarker over the high double. The Husky man was thankfully unhurt and picked-up for fourth.

As the GOAT said in an entertaining public Q+A session on the Monster Energy rig on Saturday evening, the most important factor at any MXoN is to stay up. The defending champions will be relying on late fill-in Charlier, a former European Champion, to deliver one good result to leave the big Chamberlain Trophy in their suitcase. Any fan or veteran of Nations history knows that a slice of drama will affect proceedings tomorrow and as the rain coated the Winchester site Saturday evening the chances of an upset seemed to creep higher.