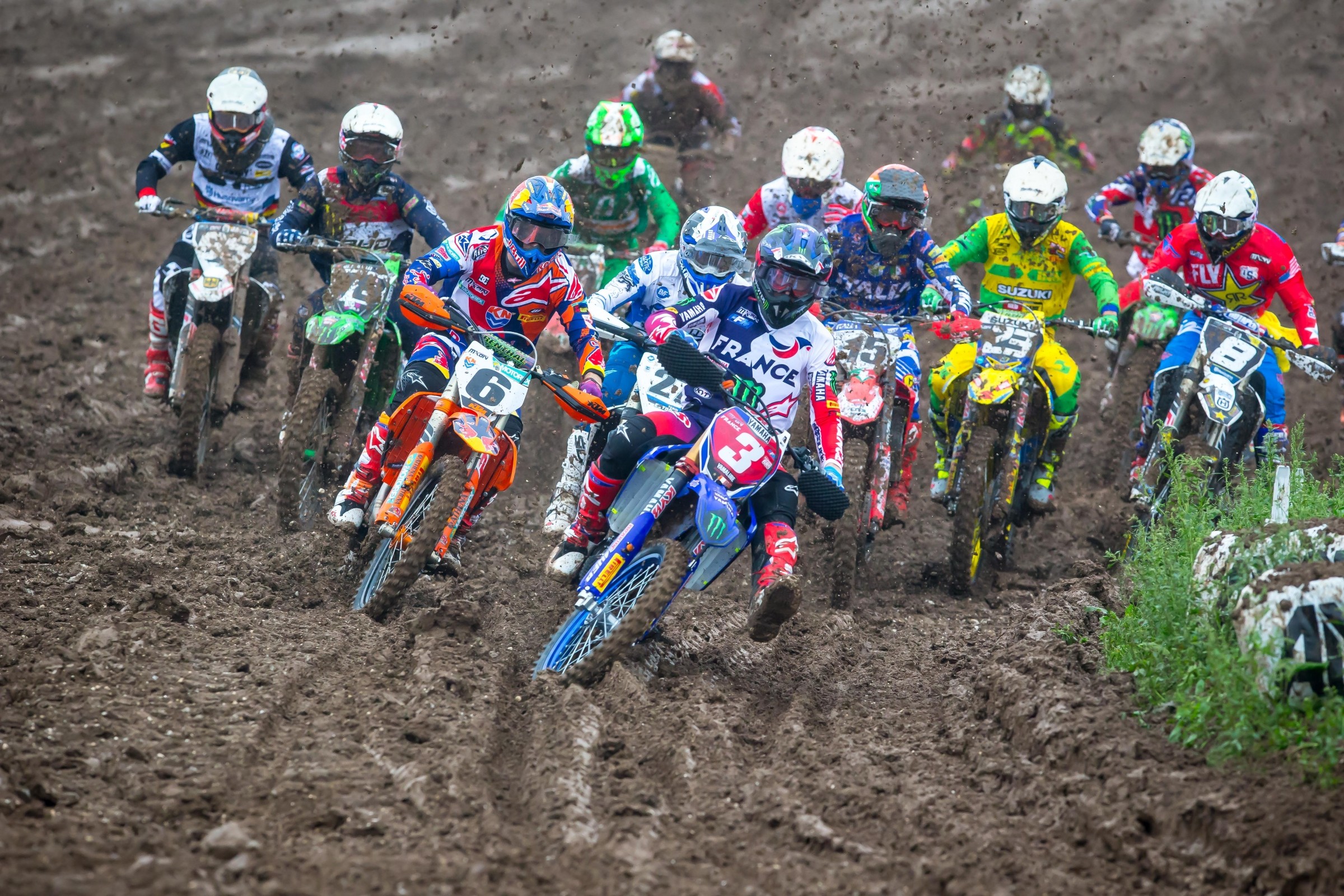 Once more the Motocross of Nations didn’t fail to deliver. The same 1-2 from the 2016 edition in a sun-drenched Italy—the polar extreme of what the riders and the crowd faced in a typically grim day of rain and mud in England—again topped the overall podium but there was some romanticism in the first appearance in the top three for exactly 20 years for the hosts. We all know the result, the dismay, the surprises and the stellar performances but here’s a selection of what caught our eye at the 71st running of the MXoN and before RedBud braces itself for a third American hosting of festivities this decade.

There are not many who would have picked Rockstar Energy IceOne Husqvarna’s Max Anstie to go 1-1 on the day. The local-born son of former GP racer Merv Anstie has had a quietly impressive first term in the MXGP class and has blossomed in the regimented structure overseen by Antti Pyrhonen and owned by F1 driver Kimi Raikkonen. An accomplished sand rider, he showed some of his mud-riding chops two weeks previously in the soaking MXGP finale in France and was undoubtedly Great Britain’s strongest threat on home turf—just two years after a horrific accident at Ernee left him with a broken neck and back while on Team GB duty. Two excellent starts and some shrewd use of lines ensured Anstie’s competitiveness. And he was cheered all the way by an ecstatic crowd that he admitted hiked the pressure but also sharpened his focus. Max’s quaint means of eloquence was an amusing sight post-race as he tried to articulate an achievement he ranked as the best of his life and was rightly feted by his more experienced teammates Dean Wilson and Tommy Searle.

“It is just a huge thing in his career … I wish I did that! It is just amazing,” said Wilson.

Perhaps a more stark example of undervaluing a rider’s potential lay with the quietly spoken Christophe Charlier—former MX2 moto winner and European Champion now Enduro rider and who was a third pick at best for the champions. Charlier mounted the MX2 Husky and was seen as the weak link for France’s bid for a fourth crown but the steady Corsican produced a 6-14 (the 14 being the French throwaway for a collection of 2-3-3-6-6 between Charlier, Romain Febvre, and Gautier Paulin) to bring home the bacon, or jambon. In doing so he became just the third rider to be part of the ISDE and the Nations winning teams in the same year—a feat unlikely to be repeated for some time. Lastly Australia will have to keep firmer tabs on teenager Hunter Lawrence who preyed on the rest of the MX2 division and claimed overall honours as well as lifting the Ricky Carmichael Rookie award with a 4-8. The Australians were sixth overall but just five points from the Belgians in fourth, who were staring at their worst placing for 13 years at one stage but Monster Energy Yamaha’s Jeremy Van Horebeek’s fourth position in the last moto helped the cause.

Cole Seely completed a total of eleven laps in his first MXoN. The failure of two rear shocks will not sit easily with somebody at KYB and Honda this week but was typical of the unexpected that this meeting just likes to throw into play. The European audience did not get the chance to see much of the HRC rider, nor the best of Thomas Covington who tweaked his knee in a first corner pile-up starting the second moto. Zach Osborne rode aggressively in the opening sprint, maybe too much, in what was the soggiest race of the day but his 3-10 was respectable enough. Team USA’s ninth position and 85 points—higher than the 2016, 2015 and 2014 efforts combined—was the definition of a day that could go wrong in more ways than one. There seemed to be a feeling of disbelief as much as disappointment around the camp post-race and finally resignation. RedBud will be the ideal opportunity to get some control over this competition once more and end a dry streak that has been in place since 2012.

Most thought it would be the Dutchman who’d secure that 1-1 but while the Red Bull KTM athlete and arguably fastest 450cc motorcycle racer in the world today did claim one of the races he missed out on a double by just 1.1 seconds to Anstie.

“I caught Max but there was only one dry line and it was very tough to pass,” he said of a thrilling final moto that saw a three way dice between Herlings, Anstie, and Febvre and ramped up the tension due to the close proximity in the points between the Dutch and the Brits and the crowd sensing something special was on the cards.

“I managed to get him in France [the Grand Prix of Pays de Montbeliard two weeks previously] but couldn't do it this time! I feel a bit disappointed because I worked hard and wanted to go 1-

Herlings wore a face of dejection after the chequered flag. Dutch teammate Brian Bogers said that the team would have been happy and accepted another second place if it’d been offered on Friday but the overall sensation of a near-miss was acute even if the French eventually toasted victory by eleven points, meaning something unbearable would have needed to happen to Febvre or Paulin (fast becoming one of the MXoN’s all-time greats and the only Frenchman to star in all four wins) in that last moto for the order to change. Herlings commented on the confidence surge five Grands Prix wins from six, an Ironman AMA feather-in-the-cap and this latest decent showing in the biggest window for the sport has provided. Despite Antonio Cairoli’s superlative year in MXGP it appears the series has a new favourite already for 2018.

Speaking of the Sicilian, the Motocross of Nations again didn't see the best of #222 (this time wearing an ominous 13) with two ropey launches out of the gate and a first moto tumble. This was not the attacking and highly focussed athlete who laid waste to all-and-sundry at Arco di Trento and Ottobiano this year but, in the bigger picture, Cairoli had achieved his aim for 2017, and then some. Normally Cairoli has carried Team Italy and hasn't had a worthy peer in terms of results and ability since perhaps David Philippaerts but full credit to his best man-to-be in several weeks, Alessandro Lupino, who produced a superb start and rhythm to register the Italians’ best classification of the day with fourth place in the second moto. Cairoli wasn't the only one that initially carried the majority of hopes on his shoulders. 2016 MXGP World Champ Tim Gajser was standalone for Slovenia and the gulf of class between the HRC man and Jan Pancar and Peter Irt was reflected in the more amusing scorecard of the day: Tim going 2-5 compared to the other tallies of 32-32-37-38. The foibles of a team event.

Matterley Basin is a magnificent and infrequently used venue for top-flight motocross but the sheer unkindness of the weather meant that it drew only the hardy fan on Sunday. Passages around the site were barely passable. It was slippery and sticky and spectators could not sit and take-in the scale of the meeting as they huddled from the wind and drizzling rain brought on by the clouds that dipped so low it threw a smoky veil across the layout. In the conditions it was amazing that congregations of Dutch, French, British, Slovenian, Russia, and pockets of other nationalities could remain so animated and vocal about the action before them. The final moto was gripping stuff and as the flag fell the fences broke and the start straight was eventually filled for what has become a passionate and noisy send-off to the motocross season. Thomas Covington may be a Grand Prix veteran and has raced Matterley several times since joining the MX2 field but even he was forced to admit that there was no other feeling like the Nations: “This is the highest level we can be; even I would have trouble trying to get from one side of the paddock to the other,” he said afterwards. Hopefully Michigan will get a taste for it all in 12 months time.