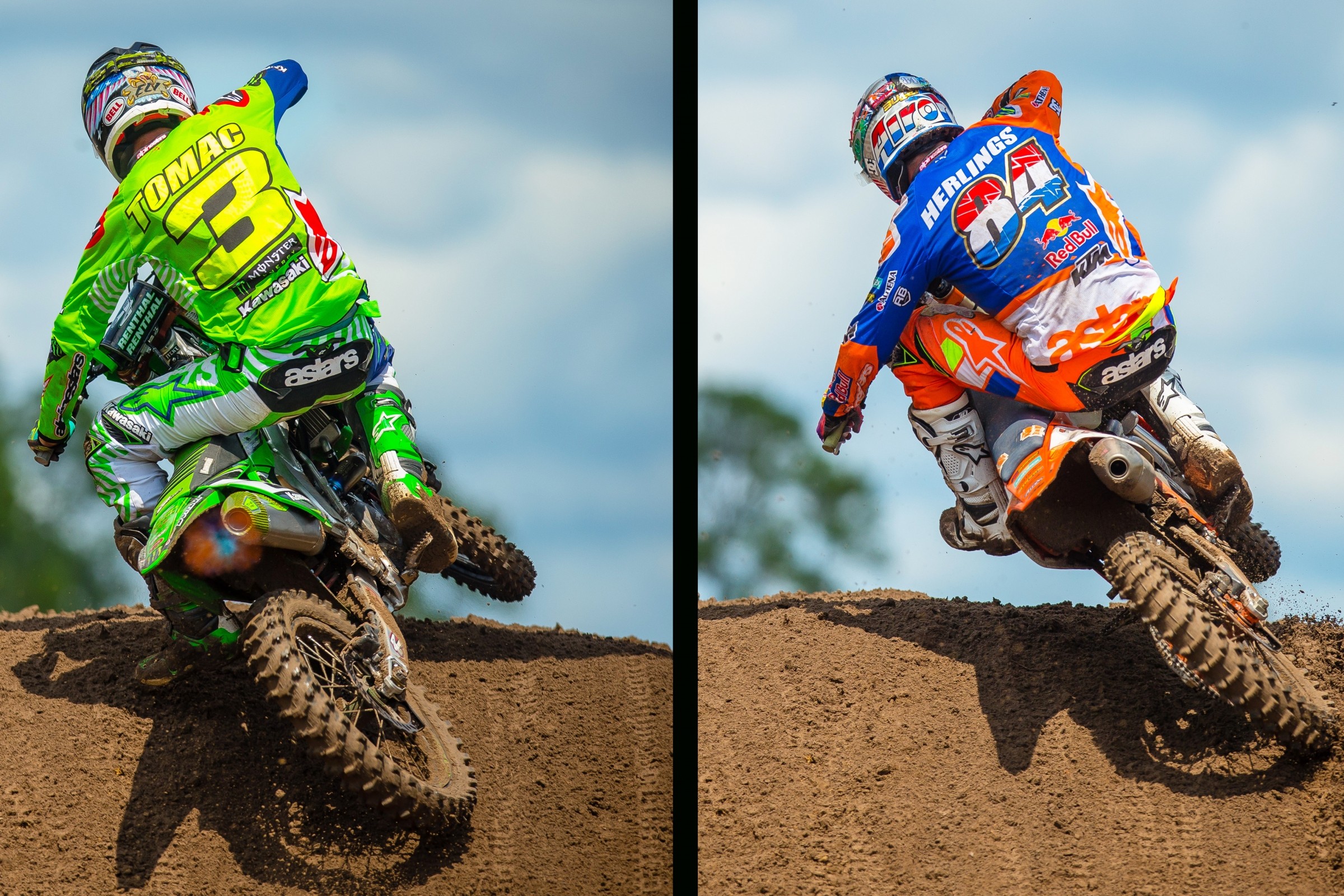 Our man Jason Thomas attended the MXGP of USA at WW Motocross Park in Jacksonville, Florida, over the weekend. A long-time professional racer and a Florida native, we asked JT to spot the differences between a typical race weekend in the U.S and what he saw from the FIM Motocross World Championship. Here’s his List.

The schedule for a round of the FIM Motocross World Championship is basically twice as long as the schedule for a round of Lucas Oil Pro Motocross. Everyone arrives Friday just as they would in the U.S., but the addition of a practice and qualifying day changes the overall feel. The real racing isn’t until Sunday and with the second MXGP moto ending at 5 p.m. or so, most won’t go home until Monday. The U.S. schedule was similar to this back in the 2000s and prior, but with a decade of one day formats behind us, it definitely felt like a long weekend.

The USA series’ aren’t too tough as far as workload on race day. In fact, most riders and trainers considered race day to be the easiest day of the week. For MXGP, though, there are two practices Saturday, plus a 25 minute qualifying race, another warm up practice Sunday morning, and then the two 35 minute motos Sunday afternoon. It’s great for the fans to see the riders so much throughout the weekend, but it surely takes a toll on the riders, mechanics, and parts budget.

The GPs use a metal starting mesh grid instead of the typical dirt start we see here. I think the mesh grid is something the U.S. will adopt sooner than later. I asked a few riders how it was for grip and feel and it sounded like it was somewhere in between concrete and dirt. I would assume it takes a specific technique to master, just like any other starting surface. The Americans seemed to pick it up quickly, though, as Eli Tomac, Dakota Alix, and RJ Hampshire all found themselves at the front.

The area by the starting gates was the hottest ticket in town on Sunday. There were media members, wives and girlfriends, mechanics, trainers, track staff, and I even think I saw a service dog meandering about. This area is usually under lock and key at the U.S. events so it was definitely strange seeing so many people in what the GPs call the Parc Ferme.

After the races, the mechanics had the unenviable task of cleaning the mud off of their entire operation and packing it into their custom boxes built to ship overseas. These custom crates and boxes are used for the fly-away events and are carefully organized for efficiency and space. Putting everything needed for a factory race effort into boxes has to be a daunting task, let alone having it ready for another race in Assen next weekend.

Most of the MXGP regulars spend their training season in the deep sands of Belgium. They ride tracks that aren’t prepped often and the same goes for their race tracks on the series calendar. They have become more comfortable with more primitive track conditions and that was evident at the treacherous WW Motocross Park on Saturday. The heavy rain made the track rough and tough and that suited them well. For the U.S. contingent, they shined when the track was at its best Sunday. The raw speed on a groomed track leaned its favor back stateside while the rougher conditions gave MXGP riders the nod.

Most of the relationships between riders in the U.S. are business like when it comes to the weekends. There is a lot of tension on and off track and competitors don’t spend a lot of time together because of it. The MXGP crew seems to spend much more time hanging out together which I believe is due to the longer weekend schedule. Most of the riders camp out in motorhomes for the European events which leads to a lot more socializing than the hotel dynamic that the U.S. sees.

The MXGP rules on equipment are much more open than the production rules of the U.S. That means the bikes are always pushing the envelope of technology and one off pieces. A keen eye can spot some serious trickery amongst the factory bikes on a given weekend.

The MXGP series is a mesh of multiple countries and continents. If you walk around the pits you’ll hear a mix of English, Spanish, German, Dutch, French, Finnish, Estonian, and many more languages. It’s a serious hodge podge of culture when entering the MXGP pits.

For as many differences as the series have, the competitive spirit between the two is remarkably similar. The riders and teams want to win above all else. The dynamic of Antonio Cairoli and Jeffrey Herlings being in separate trucks on separate teams while both on Red Bull KTM is a perfect example. It’s very similar to Jason Anderson, Blake Baggett, and Marvin Musquin all battling this summer while under the KTM/Husky umbrella.