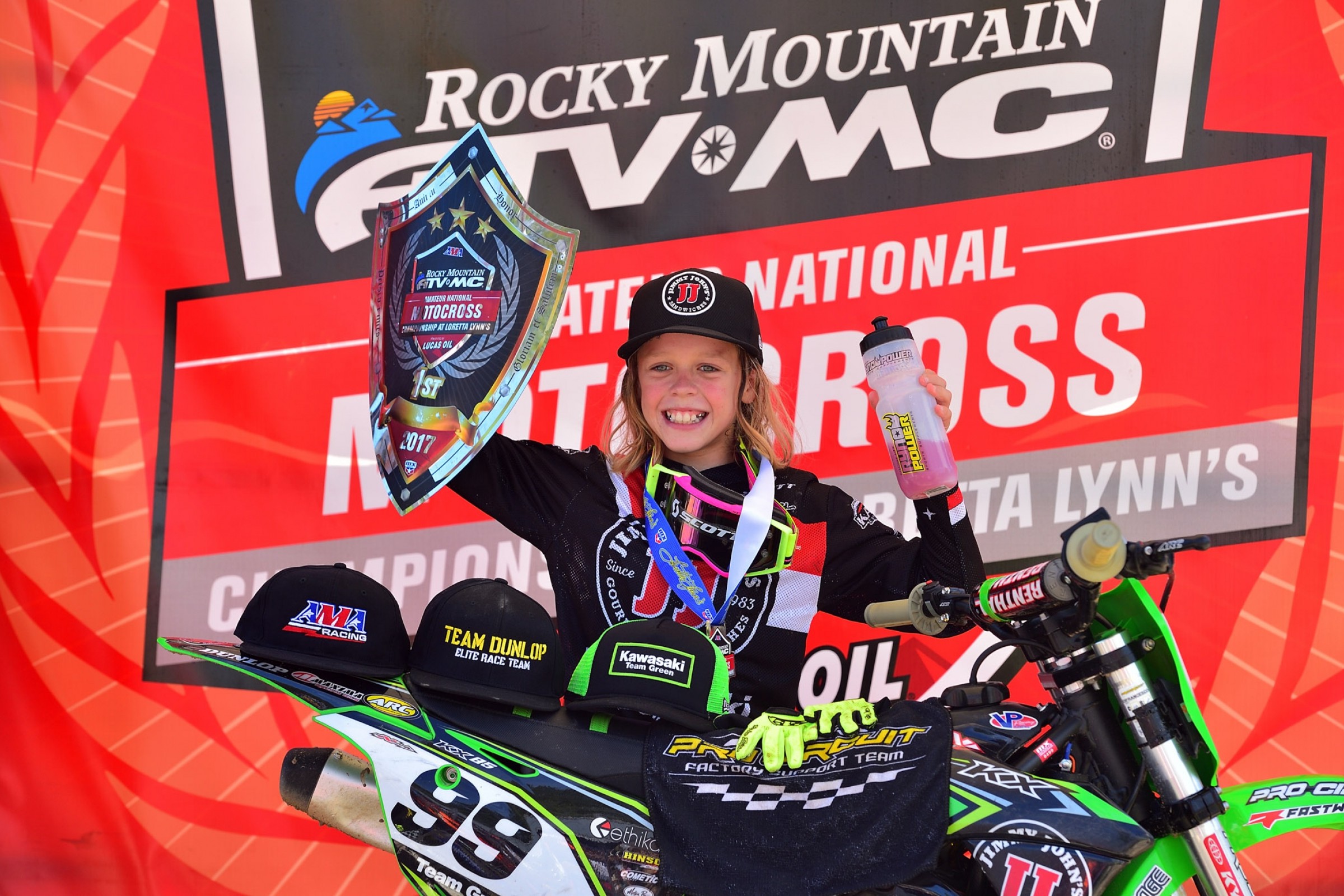 Some good news: When Ryder Difrancesco goes to the movies, he’s allowed to eat popcorn and candy. No soda, though. That’s pushing it a bit too far. He also loves to eat at Jimmy John’s. Of course he does—he has a Jimmy’s black card that lets him eat all the free sandwiches he wants.

Welcome to the hybrid life of being a 12-year-old kid but also a potential professional star. One with real sponsors. DiFrancesco hit the motocross radar by winning back-to-back AMA 51cc Stock (4-6) titles in 2011 and 2012 at the AMA Amateur National Motocross Championship at Loretta Lynn’s. That’s an exceptional feat, because it requires winning against riders a full year older, and then come back and defend that crown. In those two years, DiFrancesco went 2-1-1-1-1-1 in six motos. At that point, his talent was obvious, and so it was also obvious that motocross would not just be a hobby.

Plus, the kid who would soon become known as Ryder D had some pathways already cleared for him. Ryder hails from Bakersfield, California, same as a good half-dozen national-ranked minicycle stars. With slightly-older neighbors like Stilez Robertson and Jett Reynolds to follow, Ryder and his parents knew exactly what to do. Since then, Ryder hooked up with a Kawasaki Team Green ride (just like Robertson and Reynolds) and progressed through the ranks without much of a hitch—he even managed to grind out a 65cc title on a KX65, a long-outdated machine compared to some of his competitors. Now on 85s, DiFrancesco scored the 85cc (9-11) Limited title at this year’s Rocky Mountain AMA Amateur National Motocross Championship.

Yup, a fast minicycle kid with good support from Kawasaki. We’ve seen this situation before, but we still always wonder what it looks like. When a 12-year-old has sights set on a pro career—and the tools to get there—what does 12-year-old life start to look like?

I decided to find out. I set up an interview with Ryder and his mechanic made sure he called me at the exact minute we had agreed to. From there, I was able to find out more about what a 12-year-old ripper’s “program” is actually like.

Ryder’s schedule revolves around those three days a week—Tuesday, Wednesday, and Thursday. On Monday, he loads up on school work so he can get ahead, and then gets his studies in between gym sessions and motos in the middle of the week. He went to public school through third grade, now he’s in seventh in a homeschool program. On some weekends he will race depending on if there are some good races at the tracks in town. During the week the work is constant, though.

I ask Ryder if he lift weights. “I try!” he says with a laugh. He says his training is not specific to a 12-year old, “They tell me just to do the regular stuff.”

At the track, it’s usually two motos and then on some days he will work on sections, maybe corners, for example. Most of the time when he goes riding, it’s with Reynolds, his Team Green teammate who lives about five minutes away. Reynolds is just a year older than DiFrancesco, which means they face off as racers quite a bit—they raced against each other in both of their Loretta’s classes this season. No matter, they remain friends.

“Oh yeah, week after Loretta’s he came over and spent the night at my house.”

So what do 12 and 13-year-old moto stars do during Friday night sleepovers? “We go golfing sometimes, but we haven’t done that in a while,” he says. “There’s a go kart track down the street, and a trampoline park, we do that sometimes. That’s about it.”

What Ryder and his friends really like to do is talk motocross and watch motocross. Ryder says he watches every round of Monster Energy Supercross and Lucas Oil Pro Motocross on TV, and “it’s kind of boring” when those series have a rare weekend off.

These days most of Ryder’s friends come from the motocross world. In fact, when he was in public school, he never really explained his racing status to the other kids. “I really don’t talk about it in front of them,” he explains. “I don’t know, they really don’t get it, so I figured that was the best move.”

A few weeks ago, he got to hang with his buddies Reynolds and Robertson at a Monster Energy ride day, alongside a lot of other Monster Energy amateurs. It’s one of the weird things about riding in California—it’s common for minicycles and full-size bikes to hit the track together.

“I will go out and ride with the big bikes, but it’s pretty sketchy sometimes,” he admits. “Sometimes you try to hang, like if Dean Wilson or someone is out there, but mostly you try to stay out of it.”

Since so much talent comes out of Bakersfield, you’d think one of the kids must have an amazing backyard track. It’s not the case. “No, the closest track is an hour away,” he says. “There’s a track open that’s 10 minutes away, but it’s only open on Saturday. We used to do this track called Porterville, it was open Tuesday, Wednesday, and Thursday and we went there everyday. Everyday, we just rode a lot. We’ve been going there for a while. We’ve been riding for a good long time.”

To prep for Loretta’s, Ryder and his mother and mechanic headed out east three weeks in advance, and did some riding at South of the Border in South Carolina, Daxton Bennick’s compound in North Carolina, and the Joe Gibbs Racing MX track nearby. They worked out of a van and stayed in hotels, while his grandfather drove the motorhome to Loretta’s. They picked up dad at the Nashville airport once they were in Tennessee. During the week, Ryder’s mechanic is always there for the riding sessions, and dad comes in when he can.

Ryder’s been through some injuries, too. He broke his femur at age six (ouch!) and his humerus at age 9. “At six, I don’t even think I knew what a bone was!” he laughs. “I didn’t know what was going on. At nine, with the arm, yeah … it was pretty bad.”

Staying healthy will be the biggest key as DiFrancesco progresses forward—he’s roughly five years away from the professional career of his dreams. But when a kid works so hard at such a young age, you’ll hear talk about burnout, too. I asked Ryder repeatedly if riding and racing is still fun, and he has no reservations about how much he likes it.

“Yeah, a day like today (at the Monster Energy ride day) is really fun,” he says. “I just went out there, kind of just rode, played around with my friends. That’s pretty fun.”

Fun is the real motivator of most 12 year olds, and it’s still the case even with DiFrancesco, who will be entering the high-pressure professional world before you know it. Perhaps the funniest part of his situation is his representation—yes, he has an agency. Ryder’s business deals are handled by NASCAR star Kevin Harvick’s agency, and it’s not a complete coincidence that Harvick is originally from Bakersfield, also. But DiFrancesco is the only motocross racer in the fold, and also the only kid. Some of Harvick’s other clients are UFC fighters—which makes for some funny photos alongside a fresh-faced 12-year-old.

And that’s still what DiFrancesco is. For now, he’s still willing to have sleepovers with his closest competitor, who also hails from the same town. He still gets to eat candy, and all the Jimmy John’s sandwiches he wants. Life’s pretty good for this 12-year-old. We’ll see down the road how it all turns out.