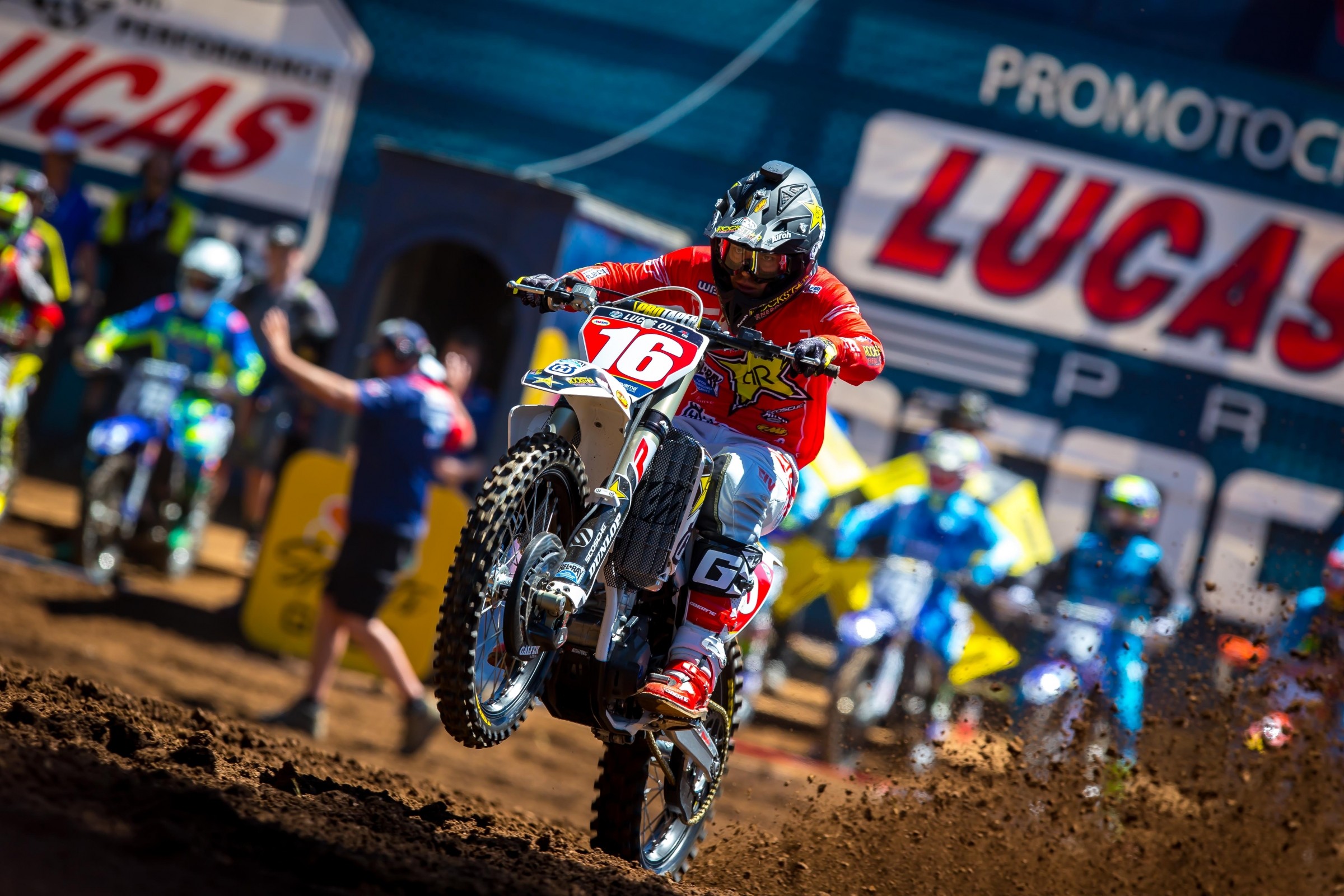 A weekend off in Lucas Oil Pro Motocross feels like a lifetime. But when we left off, Joey Savatgy was enjoying an improbable 7-1 overall win, RJ Hampshire was enjoying a breakthrough ride, Adam Cianciarulo was down in the dumps … yeah, much happening. Here are some storylines to follow over the last three rounds of the championship.

Barring catastrophe, Rockstar Energy Husqvarna’s Zach Osborne will clinch his first 250MX title over the next three rounds. While there is a slim chance it could happen this weekend, the more likely scenario will see Osborne clinch at Budds Creek, site of his infamous “Snack Pack” race more than a decade ago, where he led most of the first moto as a rookie only to pull one of the all-time fades and drop back to 18th. Osborne says his life is all about irony, so of course he won his first career 250MX overall at Budds last year, and could clinch his first 250MX Championship there this year. Since he’s currently 74 points up on second place Jeremy Martin, who has struggled at the last two races, it’s not impossible for him to lock in the title this weekend. Osborne would need to gain 26 points on J-Mart at Unadilla. When (or if) he does clinch, it will mark the first 250 title for Husqvarna in the 125/250MX Class and its first since Kent Howerton won the 500cc Class in 1976.

Debut on the Horizon

Justin Cooper capped off an unlikely rise through the amateur ranks with two A class titles at Loretta Lynn’s last week and the Nicky Hayden AMA Horizon Award. The New York native will make his pro debut with CycleTrader.com/Rock River Yamaha (he’s signed with Yamalube/Star Racing Yamaha for 2018) at his home race this weekend—although he told us he’s never ridden the big track at Unadilla, so don’t expect any advantages (Unadilla holds its amateur races on a separate track). Since 2000, only one Horizon Award winner that made his debut in Lucas Oil Pro Motocross has cracked the top 10. In 2011, Justin Bogle finished fifth overall at Unadilla in his debut. So, don’t get too caught up in Cooper’s results this weekend. Some guy named Ryan Villopoto finished 15th overall in his debut and he turned out just fine.

We took a look at the last 18 Nicky Hayden AMA Horizon Award winners to see how they did in their rookie debuts. Below you'll find the year each rider won the award along with the track they turned pro at and their overall finish

Over the last three rounds, only Zach Osborne, Joey Savatgy, and Dylan Ferrandis have a better average finish than GEICO Honda’s RJ Hampshire. Since returning at High Point, the third-year pro is finally showing the speed that garnered him such high praise leaving the amateur ranks. Dismissing his three mechanical DNFs, Hampshire has averaged a 6.4 finish (per moto) since his return and earned his first career moto podium prior to the break at Washougal. Could we see the Florida native breakthrough for his first career win?

Here are the top five average finishers in the 250 Class from the last six motos going back to the first moto at Southwick.

You don’t get much closer to an overall win than Monster Energy/Pro Circuit Kawasaki’s Adam Cianciarulo did at Washougal. AC held the overall until the final lap of the second moto when Dylan Ferrandis made a pass with half of a lap to go. The position not only cost Cianciarulo the overall, it knocked him off the overall podium completely, as he finished fourth overall. “I probably would have ghost rode my bike into the guy if I knew that. If I knew that was for the win, yeah,” Cianciarulo told us after the race. Can AC brush off a tough defeat and earn his first career overall over the next three rounds? After Washougal, he said this: “I feel like if I did a couple things better, half a lap away from an overall win. So, it sucked. As a racer, I’m competitive and it’s pretty shitty. It is what it is. My plan is to win Unadilla, 100 percent.”

Despite Zach Osborne holding a 74-point advantage in the standings, the 250 Class has been highly competitive in 2017. Think about this: in 18 motos, 11 different riders have landed on the podium. That stat alone shows how much depth the class offers. Yet, one could make an argument we’re not done. Colt Nichols has three moto top fives on the year, and has shown podium speed at times. Rookies Sean Cantrell and Chase Sexton seem primed for a breakout ride at any time. And if Mitchell Oldenburg is able to return from a collarbone injury, he could snag a podium. So, while the championship is on lock, there is still plenty to watch in the 250 Class.