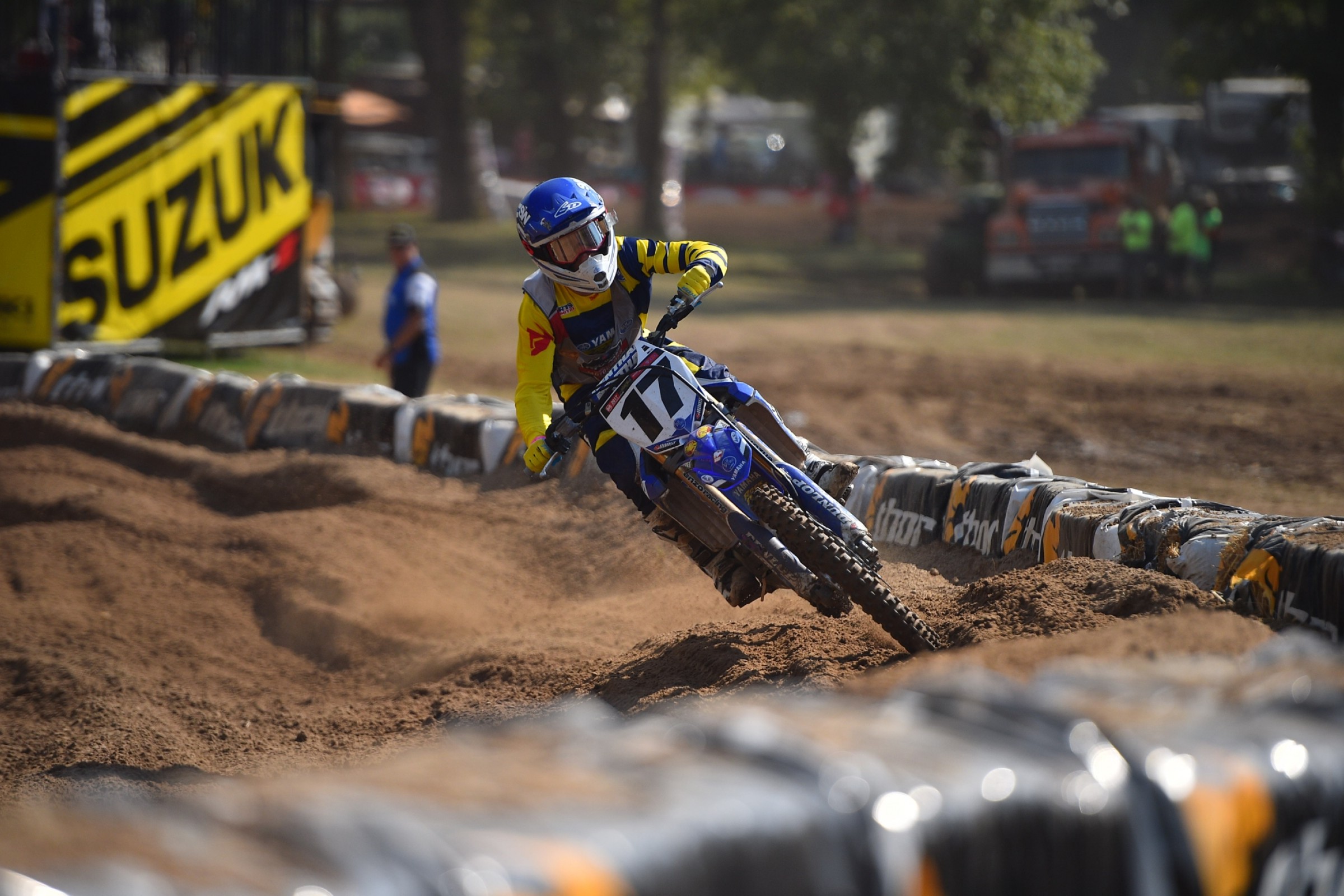 In an amateur motocross world filled with can’t-miss prospects, this year’s Nicky Hayden AMA Horizon Award Winner is someone who spent his career well under the radar. Justin Cooper didn’t take the standard path to a pro deal, as he stayed at home in New York during the winter, attended public school throughout, and was so unsure if he could make a living as a pro that he even took a year of college classes.

Then he started winning a lot, and things changed in a hurry. From the Thor Mini Olympics last November through a full season of Amsoil Arenacross Lites competition through amateur wins in the spring, and then his four wins in six motos at Loretta’s, (his second and third place finishes included huge comebacks) Cooper has been on fire. During one Loretta’s moto, we spotted Ricky Carmichael on the infield, watching Cooper closely, and RC told us he was very impressed.

Who is this guy? We found him during closing ceremonies to find out.

Racer X: Let’s start with this. I feel like your path here is not the same as other guys who’ve won the [Nicky Hayden AMA] Horizon Award. Do you think that? Do you feel that way?
Justin Cooper: Yes and no. I wasn’t the best coming through the ranks, but I wasn’t able to ride too much when I was little, so I’ve been really working hard the last couple years and slowly making my way to the top. I just have been pretty consistent ever since last year at Loretta’s. I got hurt and really put my head down. Last year I’ve been able to come out on top on pretty much everything. Surprised myself and everyone around me and it’s got me to where I am now. I just won the Horizon Award, so looking to go pro next weekend will be good.

Were you in New York, like for real in New York in winters?
Yeah, but I would do the arenacross series so I’m pretty good with that indoors.

So that was your winter, indoors?
Yeah. That would keep me busy racing that every weekend. But during the week I would just train in the gym and stuff. No riding going on there. A lot of snow on the ground. I don’t think it’s a bad thing because it doesn’t burn you out. You don’t get sick of riding. You want it more. Now, that’s not the case. I’ve been going down south for the winters just to get that much better. But for the last couple years it’s been like that.

When did you finally start going for it like that and moving south? When did that start?
When I started getting more into all these national amateur events. We’ve been doing Freestone and all the spring nationals. It’s still cold up north, so go down and do all that racing. Keeps you on the bike.

You have some brothers that race, too?
Yeah.

What do they do?
My brothers are 13 and 11. My older younger brother, he podiumed Loretta’s three years in a row on the 50s, but hasn’t taken it too serious and kind of dropped off the radar, but he’s still having fun with it and supporting me for sure.

So, during the winter when you couldn’t ride, was it like driving you nuts? You think, man, I could make a go at this? Or did you not know if you could?
I felt like those guys were getting an advantage. I had to go to public school, so not much room to travel with my parents working all the time. Definitely made me a little jealous of the other riders that had the advantage of riding down south every day and all that. Just kept me hungry to want it more and work harder than those guys.

But that’s awesome. Did you go to public school?
Yeah, I graduated from public high school.

It’s been forever since I’ve heard somebody do that. That’s cool.
There’s been a couple people that go through school, but they end up getting homeschooled towards the end once things become a little more serious. But I was able to stick through it to the end and actually do a full year of college. Then I realized things were getting a little too serious to continue with school.

So, at one point were you not even sure this was going to be a career? Is that why you were looking into college?
I didn’t think I was going to get paid for it, but just getting picked up with Star Racing Yamaha—it’s kind of my job now so I have to take it really serious and drop out of school.

But as of like two years ago you didn’t know that this was necessarily what you were going to do for a living?
I knew I was good, but I didn’t know I was going to be this good.

That’s crazy. So, you won like all your motos here two years ago, but they weren’t in the A or B class. Did you have an idea of where you stood at that point?
Yeah, actually I was setting the fastest times of the week with the A riders. It was a good stepping stone, but still nothing to really be excited about. It’s definitely something good, but I wouldn’t say everyone saw it.

I honestly didn’t even realize until I started looking back and I was like, wow, Two-Stroke and College. Then last year you got jacked up.
Yeah, second moto of the week I fell on the start and someone just hit me. That was it for that week.

Then it started clicking once you were back?
Actually, I was supposed to go to Unadilla last year as a privateer so maybe it was for the better.

You were going to be done as an A rider and go for it?
Yeah.

So, it’s been a good 12 months?
I couldn’t have imagined it going this good. I guess I really wanted it after I got hurt and I was really mad about it. So, I put my head down and did everything I could.

What’s it like hanging out now? I know you got moved in a little bit with Cooper Webb and that whole gang. What was that experience like?
Yeah, I moved in with them about two months ago and I’ve been riding with them coming up to this race. Really confident coming into this race. Knew what I had to do. It was a good week. On the podium every moto with some mistakes and stuff like that, but that’s how it goes. Those guys are pushing me really hard. I get to ride with them every day. It’s just good to know where you’re at.

Is the work hard because you couldn’t do it your whole life? Does the work part bother you at all? Or are you like, finally, bring it on!
It’s just something that will make me that much better, so I’m totally for it.

Any expectations for Unadilla? You probably haven’t even ridden it, even though you’re a New York guy. Have you ridden the big track ever?
No, I have not.

Do you have any expectations on what you want to do?
Yeah, but the main goal is to have fun. I know everyone says that, but it really is to have fun. You don’t want to put too much pressure on yourself and crash out or something like that. But if I do get the opportunity to be up front, I would expect to be at least top 10 overall. Set myself up for a top five overall or even a podium is a little bit too much for me right now, but we’ll see how it goes. I definitely wouldn’t put it past myself.

You’ve been riding with these dudes, so you have a somewhat—it’s not in a race. I know it changes, but you have somewhat of an idea where you’re at, right?
Yeah. Basically, the 35 minutes is what it’s going to come down to. I have the speed, but I just don’t have the experience yet so I don't know how it’s going to go. I should be strong for at least 20 minutes. We’ll just play it out race by race and see how it goes.

How does your family feel about all this, the way that it’s gone over the last year or two?
They can’t believe it. They’re more shocked than me. I knew I could do it. It’s pretty surreal that it’s happening now. I can’t wait to get it going.