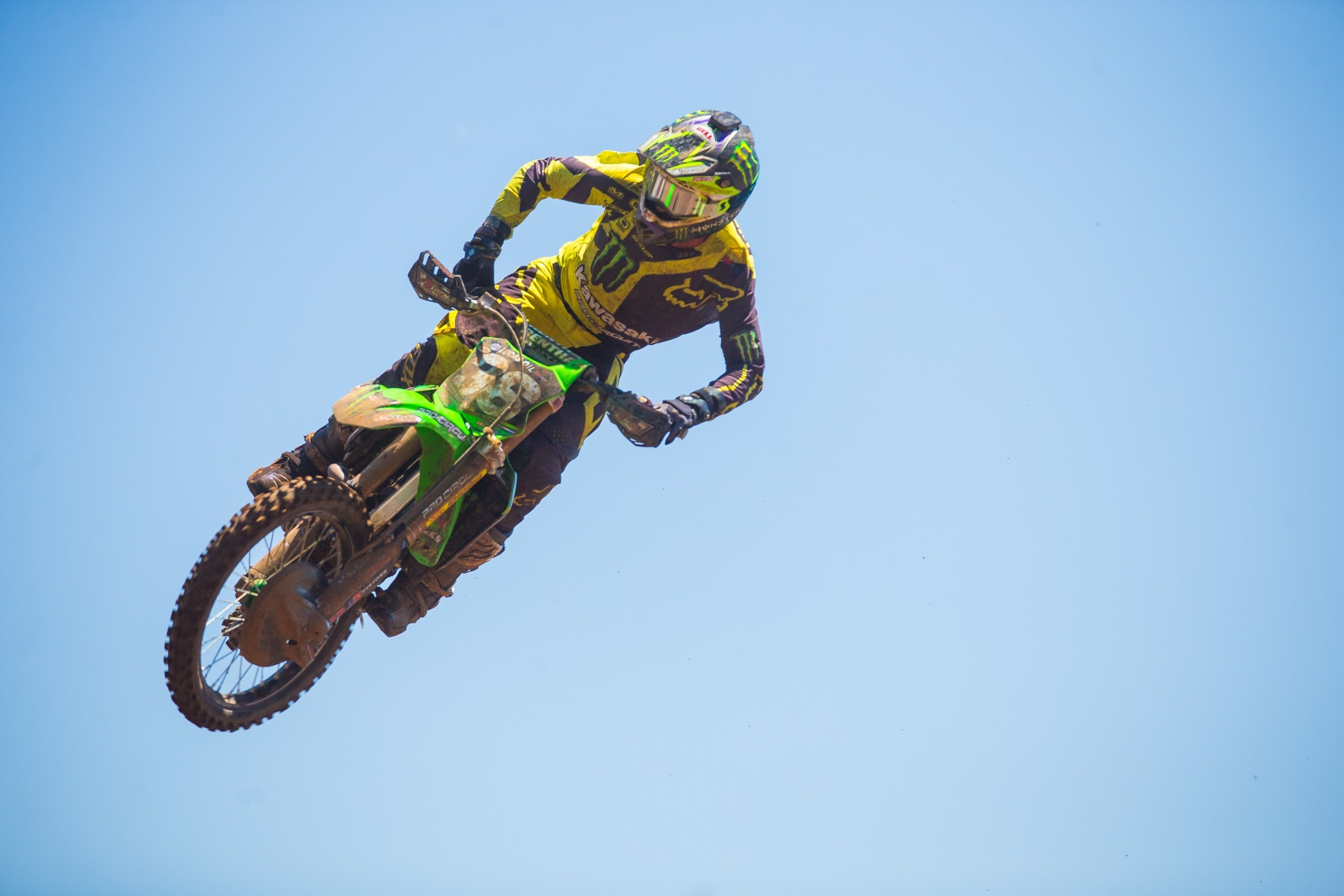 With four laps to go in the second moto at the Washougal National, Adam Cianciarulo sat in third place and was looking at riding 2-3 scores to his first ever overall victory. He got passed by Zach Osborne on the next lap, but was still looking good for the overall until Dylan Ferrandis put him another position back on the final lap. AC went 2-5 on the day for a disappointing fourth place overall, just two points away from getting his first National win.

We caught up with an angry and motivated Cianciarulo after the race to get his thoughts on what happened in that second moto, the ups and downs of his career, and his attitude going into the final three rounds of Lucas Oil Pro Motocross.

Racer X: Take me through the day.
Adam Cianciarulo: Honestly, after Millville I was pretty just pissed off. Just a bunch of fifths and fourths this year. I was just over it.

I didn’t realize, you had somehow not even gotten an overall podium.
Right. So today, not that I wasn’t motivated before, but I was just kind of angry all day. I just rode angry. Qualifying good, but it hasn’t translated to the race so at some point it stops meaning something. I felt good in the first moto. With the second, [Aaron] Plessinger had such good opening laps and he pulled away and just kind of stayed there after I got into second. But I felt good about my ride—a lot better than previous weeks. Second moto, the track was really slick at first. Those guys were pinning it and going back and forth. I was watching them. I got close to [RJ] Hampshire a couple times. Looking back now, I should have just … you just have to make an aggressive move. You got to bully your way around. If I would have put Hampshire behind me and had [Zach] Osborne and [Dylan] Ferrandis mess with Hampshire the whole time, I’m looking at a 2-2. So, looking back, I needed to put 80 percent of my energy into getting around him and then kind of chilling and finding my groove. Instead I let the race come to me a little bit too much. Then Osborne got me with like three to go. Then I actually didn’t know Ferrandis was behind me. Once Osborne got me, then I heard somebody right there. I was trying my hardest. Ferrandis snuck around me. I didn’t even think I was winning the overall if Ferrandis didn’t get around me.

Did you know throughout the moto the overall at all?
No. I should have. I guess my mechanic was putting it on the pit board. I was just so locked in to the battle I didn’t even notice it.

So, when you got passed there, you didn’t know this is for everything?
No. I probably would have ghost rode my bike into the guy if I knew that. If I knew that was for the win, yeah.

So, how did you find out? When did you find this all out?
As soon as I got off the track. First, they told me I was on the podium, and then they told me I got fourth overall. I tied with basically everybody. My teammate goes 7-1 for the overall. Definitely happy for Joey [Savatgy], but it stinks.

Were you tired at the end of that moto?
No. When I caught Hampshire and he started making a bunch of mistakes—that screwed me up. I got caught behind him and it kind of messed my whole flow up I had going. When I was stuck behind him, then Osborne and Ferrandis caught me. At the time, I didn’t know it was both of them. I thought it was just one guy. So, that kind of ruined my whole pace. It was a bummer. Things could be worse. To put it in a positive light, which is very difficult to do right now, I’ll take that, barely losing a win, over going 6-6 or whatever I’ve been doing the rest of the season. I’m done being a five, six, seven. I’m done being that guy.

I’ve got a theory here. Way back in the day, Mike LaRocco was on Kawasakis and he’d win a lot. Then he switched to Suzukis and the bikes were horrible. Then when he got back on Hondas and his bikes were good he said it took years to get back to the, “If I don’t win the race, I should be pissed.” He had had three years of just kind of accepting fifth. You used to win a lot. Do you almost feel like you need to get back into that? If I don’t win, that’s unacceptable. Is that one other piece you have to get back? You used to freak out if you got fifth.
Especially coming back from injury, as many injuries as I had. I kind of had to reteach myself. There’s a fine balance between losing being okay—it’s okay to a certain point to where you don’t need to put yourself on the ground essentially when you’re coming back. It’s been a process for sure to try to get back. Zacho  is the dominant guy right now. You look at somebody like him and you see in his riding, it doesn’t matter where he starts. You can just see it. He knows he’s going to the front. That’s just what it is. It’s just happening. I know I got a fourth this weekend, but I took a big step towards that this weekend. My whole mindset, I needed a little kick in the ass. I blew the win. I think in a couple years my plan is to have so many wins to where you look back and you’re like, man, that wasn’t really that bad. We used it, not even necessarily as motivation, but just something to look back on and be like, I remember how devastated I was after that race.

You haven’t been able to be devastated. You’ve been able to accept fourth a lot the last couple years and happened to make yourself okay with it, because you were coming back from injury. So now you’re getting back to the point where now it’s starting to suck.
Yeah, it always has sucked. Just mentally I know personally I am expected to win. I am paid to win, and it’s time to win. It’s just time to win for me. I feel like I have everything I need. I feel like if I did a couple things better, half a lap away from an overall win. So, it sucked. As a racer, I’m competitive and it’s pretty sh***y. It is what it is. My plan is to win Unadilla, 100 percent.