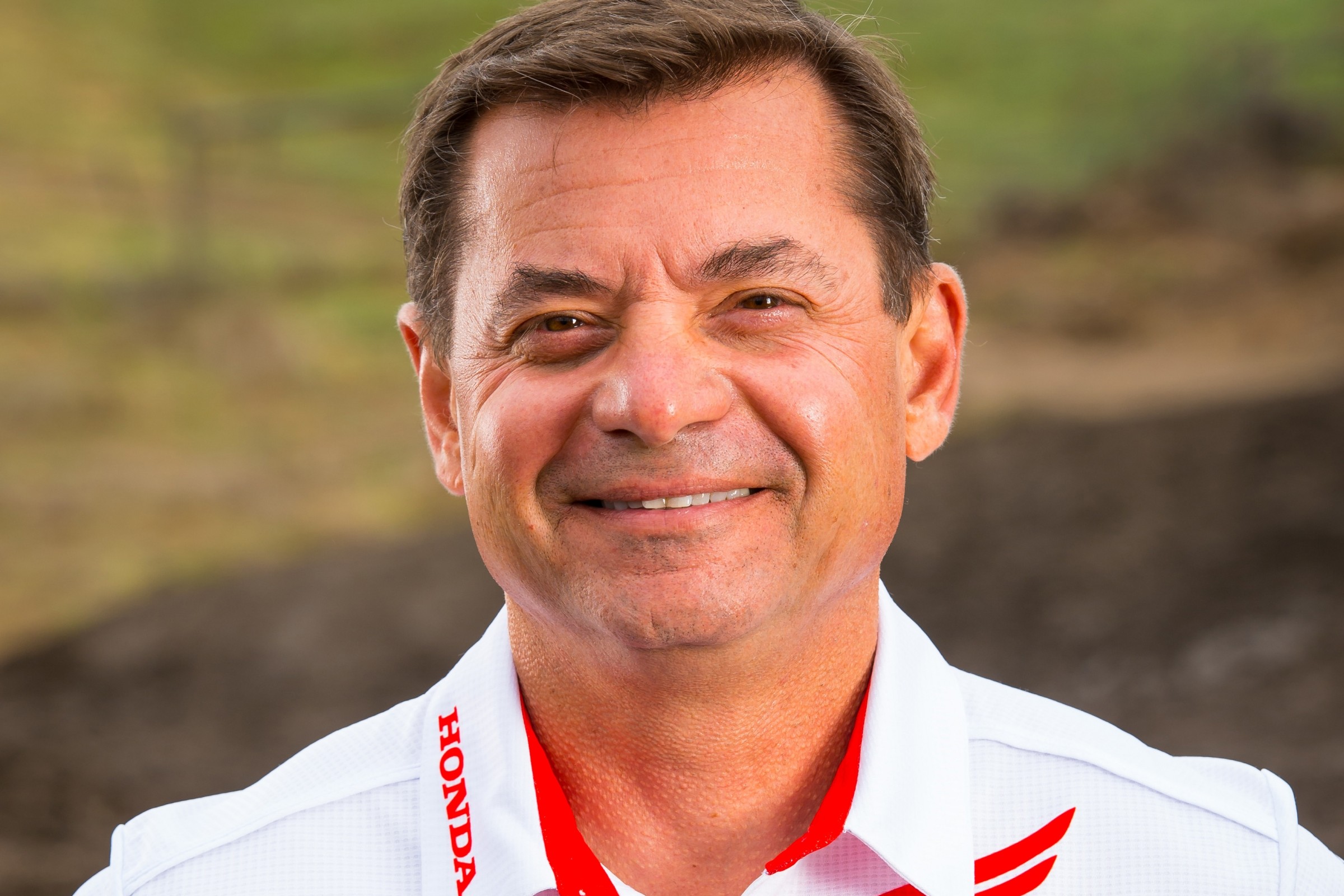 This was finally supposed to be “the year” for Team Honda HRC. Team manager Dan Betley had been building a core group of people and technology—with big help from the HRC outfit in Japan—to bring the team back to prominence, and then the all-new Honda CRF450R debuted for 2017, and Ken Roczen was signed to ride it. Betley, who wrenched Jeff Stanton to six AMA National Championships during Team Honda’s glory days, saw his plan coming together, but admitted, also, that if it failed, “his ass was on the line.”

Roczen went out and won the first two rounds of Monster Energy Supercross. All looked good—until he crashed out of round three.

Since then, Honda HRC is back to being a bit player, occasionally popping up around the podium with Cole Seely, but no longer in the mix for titles and race wins like it had hoped.

How are Betley, Roczen, and the team holding up? Let’s find out.

Racer X: I want to go back to a story here. We were at round two in San Diego. You win two in a row. The team is over there, I’m not going to say they were celebrating, but they were pumped. I remember you pointed over to that, and you referenced Anaheim 1, and you said “That wasn’t real. It’s going to get harder. It’s not going to go like this every week.” Well damn it all, Dan, you ended up being right.
Dan Betley: [Laughs] Yeah, and too bad. I think it’s the first time this year that I’ve been right!

I know you guys have tried really hard to try to not let that affect the morale and keep Cole and whoever else is on the bike in it mentally—but it has to be a big blow. It has to be tough.
It was. It’s been very difficult for the team and the morale, the struggles and everything. But it’s not like we haven’t been exposed to it before. We’ve unfortunately lived through some of this. What has really helped is, from behind the scenes, you talk to Kenny and he gets you pumped. The guy’s personality is just so addictive.

Even still? Not even racing? Through all this?
It’s off the chart. He keeps me motivated. I try to help keep the team motivated. I may not be the best at it at times. I could probably do a better job of it, but that’s all part of it. We all realize we’re all a team and we’re all working for the common good. Win some races and championships hopefully. That’s what the goal is.

With Kenny’s injury, did you need weekly updates or was it kind of like, you take care of your deal and talk to us when you have some news?
At first, we don’t need weekly updates because it was serious trauma. But it got to the point probably a month, month and a half ago I started asking for weekly updates. Then we started communicating probably on a weekly basis. Then from there now it’s progressed. It kind of blew up about a week or so ago, because it kind of went off the charts. It was an exciting Thursday I remember. He rode, and there were a lot of phone calls and a lot of questioning about what the hell was going on. All of us are so excited to see him back on a motorcycle, but then there’s the other part, the sensible side is going, pump the brakes, we’ve got plenty of time to do this.

When you made big changes to the team, you even admitted you were putting your job on the line if this doesn’t work. I think your money quote was “It’s my ass on the line if this doesn’t work out.” Do you feel that pressure now? Or is everyone around the company saying “Hey, the guy got hurt. Everything was going good and this was going to work?”
I’ve lost some sleep over it, for sure. I have said from the beginning, I put the success and the failure of this team on my shoulders, regardless if it’s really my fault or not. It is me. The buck stops with me. It’s not just me building this team—I’ve got management upstairs that has to write the check and agree to things. I’ve got the staff that has to work with me and make this happen. It’s all a team effort, but eventually if this doesn’t work, somebody’s going to go, “What the hell did this guy do? “And I’d be like, “Yeah, that’s me. I’m the one that screwed that up.”

"If you ask Kenny, he’s doing Motocross of Nations! Probably he’s thinking of doing the USGP, but we’re like, slow it down."

But you’re willing to take that?
For sure. It is what it is, right?

Yeah, but it’s not like you went out and had crap results. The guy got hurt.
Yeah, and please don’t get me wrong—there’s nobody on my back in the company right now … we’re good. Everybody, I think, is excited for the future. I think we have a better motorcycle. We have a solid team. I think Cole’s improving. I think he’s changed up his program for the better. I strongly believe Kenny’s going to come back and win races and championships. I believe it because he believes it.

So that’s the addictive part of Kenny’s personality. When you talk to him about this you can’t help but get into it?
It’s crazy. I actually texted him this week. I said, “I have never been around an individual like you.” I’ve never seen somebody so driven and so positive in his mental state that it’s just addictive.

Cole had some podiums outdoors even last year, so the results haven’t necessarily climbed this year. But he’s getting better, you still say, even if it’s not on paper?
Everybody wants results. I think results aren’t really the true story. You look at the guys that are leading the race, and you look at how many seconds we’re off of that, and how close we are to that. Compared to the beginning of the year, we’re kind of starting to close that gap down. I look at his conditioning and how he’s running late in the race. I think this was an improvement today [at Washougal]. I saw it from practice one. I was like, “Who’s on the #14 and what did you guys do with Cole?” I saw it immediately. If he can continue that progress, I’m good.

Obviously, you didn’t know Kenny was going to get hurt, but like you said, even if Kenny didn’t get hurt it wasn’t going to be perfect and easy all year.
No.

So, the process of the new bike and everything, even though you won immediately, it has turned into a learning process?
Oh, for sure, like there’s going to be with any new bike. Nobody just shows up and goes, “This is the best thing since sliced bread.” There’s always teething pains, right? But what was different about Kenny was, he came into the team. He does know a lot of people here, but he doesn’t know everybody. Everything just fell into place way too easy. It was all going so well, probably too well, so at some point we’re going to hit a speedbump along the way. But we hit more like the Grand Canyon, not a speedbump! But we’re going to regroup from that and I really believe we’re going to come out strong next year.

Over the last few weeks/months, I/we have been putting in A LOT of work and effort. For a long time, I was really limited to what I was able to do. Being the busy body that I am, the feeling of being useless made it hard for me to sit around. We got a call from Dr. Viola a couple nights ago with the green light to be able to ride on the turn track. Those unexpected words gave such a smile and the pure feeling of happiness. We immediately made about 10 calls in 10 min to tell some of my people that I needed a bike and gear TOMORROW!!!!!!! No one expected us to be back to riding already! Sometimes we take feeling healthy for granted. All of a sudden being at the bottom of your health, and not knowing if things are going to be ok is a feeling that is hard to describe. After all of the ups and downs, having the best doctor, a great support team with the companies and people that are behind me and who believe in me, and the positive vibes from all of my fans, here I am back doing what I love. What a great feeling to be healthy and being able to represent my sponsors, family, friends, and fans! So, for all of you guys that have had a down moment in your life, no matter if it's an Injury or for personal reasons...you either fold up (not recommended) or you simply put your mind to something great and go and work for it. Don't EEEEVVVEER doubt your self. Bad times!?? Do something about it! We did. @honda_powersports_us @redbull @foxracing @shiftmx @stancesocks

Is there any specific timeline? Do you know for sure he’s racing Anaheim or anything? As soon as people see him on a bike they started looking at the calendar.
If you ask Kenny, he’s doing Motocross of Nations! Probably he’s thinking of doing the USGP, but we’re like, slow it down. Let’s be smart about this. I think the most important thing is to not just have a doctor go, “Yeah, your bone is strong enough. You can ride.” He’s got to be in a good mental state. He’s got to be in a good physical state. He’s got to feel like he’s ready to go. I believe mentally he’s already there. I believe he was out doing a moto today. Now, he’s supposed to be wheels on the ground, and it’s a turn track, but at the same time, he’s still doing that for 30-something minutes. He texts me and says he honestly feels he could race. Condition-wise he’s good to go. It’s not like he got hurt and he was sitting on the couch watching TV and eating Bon-Bons. The guy is a bit ADD and he’s just always wanting to do something and having fun, and staying physically fit is part of it.

I think that’s what people forget. Yes, the injury was severe so many people will assume you can’t come back from that. But they forget that these guys are full-time professional athletes. He can go anywhere, spend anything, do whatever it takes. It’s not a dude that has to go work at the factory or at his computer a few weeks after he gets hurt and tries to get some therapy on the side.
How many athletes do you know that got injured and moved a therapist into their house? He is getting therapy two times a day at his house. How many times have you heard that happen before? So, that’s how committed he is to coming back and living his dream and winning championships.