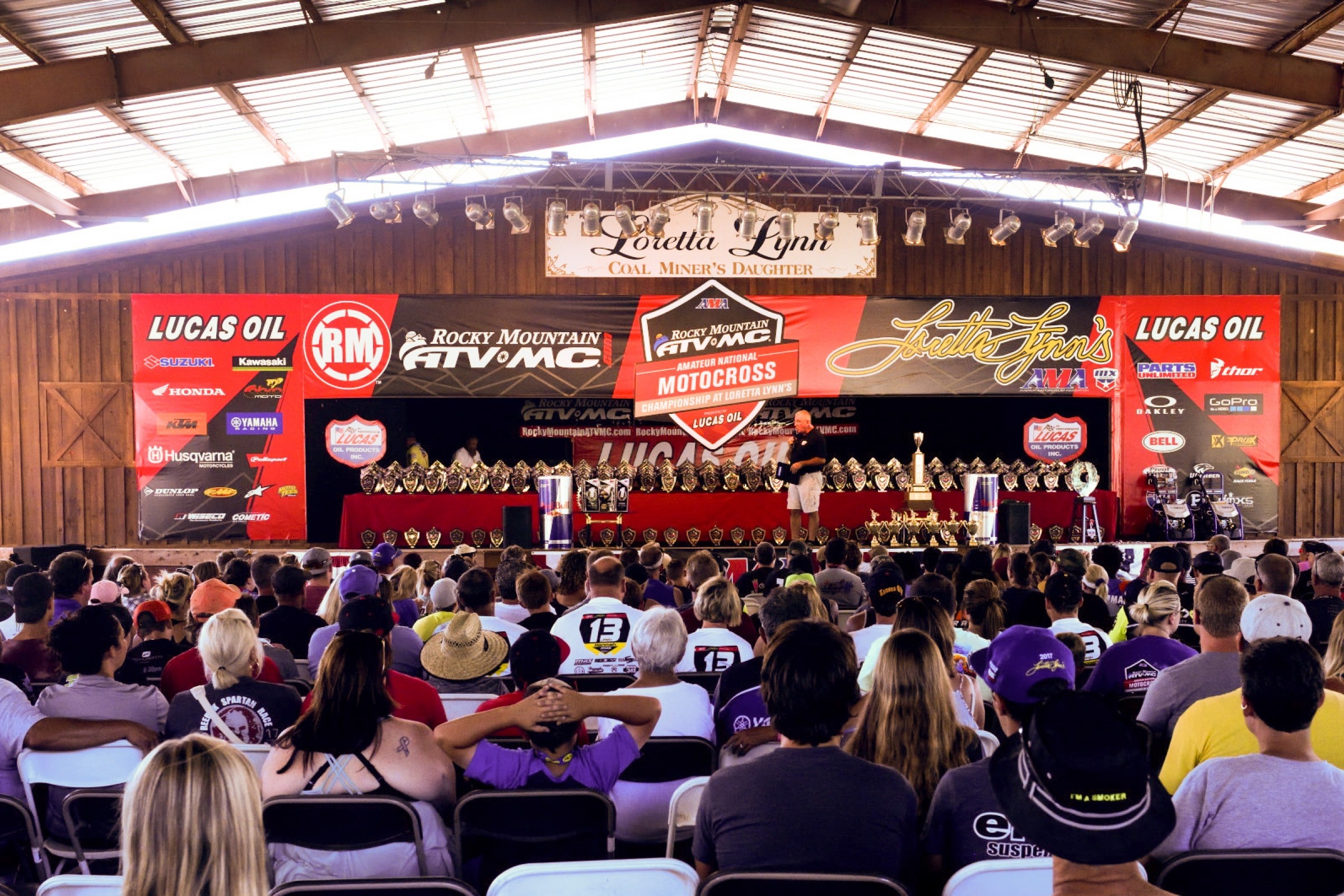 1.) Swoll is Definitely Not Lucky

You know how everyone loves two-strokes because they’re so fun, cheap, and reliable? Yeah, well Jalek Swoll is definitely not loving them right now. Swoll was on a Rockstar Energy Husqvarna 125 in both the Schoolboy 1 and 125 B/C classes this year, and went 1-2-1 in his first three motos. From there? His bike blew up in both classes, costing him both titles. Earlier in the week, even after winning a moto, I asked Swoll on the podium if he will miss riding his 125 when it’s time to move up. “Definitely not,” he said.

2.) Bennick is Luckless, Too

Bike problems were all around during championship motos. Jett Reynold’s eight-class win streak ended with a bike problem on Friday, and a bike problem cost Jazzymn Canfield a sure title in the Girls class. Then there’s 65cc rider Daxton Bennick. He was in complete control of 65 (10-11) Limited, looking at 1-1-1 scores as the white flag was about to fly. Then, a few feet from getting that white flag, his bike quit. Casey Cochran inherited the title on his Cobra, although he’s already tabbed as a Suzuki prospect on 85s. Now he’ll bring a title with him.

At just 12 years old, Ryder DiFrancesco already has outside sponsorship from Jimmy John’s and will surely be paid to hold a can of Monster Energy on the podium as soon as the energy drink company declares him old enough to do so. With his giant smile and long blonde hair, Ryder D already has the podium photo op down like a pro. Don’t assume this kid is all flash and no heart, though. He’s been a battler at Loretta’s, first by having to race the way-outdated Kawasaki KX65 the last few years against the mega-quick KTMs and Cobras, and this year he gave the bigger kids in 85 (9-12) (he’s a year younger than his Bakersfield, California, neighbor, teammate, and buddy Jett Reynolds) all they could handle. In the younger 85 Limited (9-11) class, it came down to a winner-take-all third moto between Ryder and Team Green mates Chance Hymas and Nick Romano. DiFrancesco got the start and Hymas crashed while running second. “That was the most nervous I’ve ever been in my life before that moto,” DiFrancesco said on the podium while holding another number-one plate, big smile and long hair in check.

It’s not technically part of the AMA Amateur National Motocross Championship, but the final two motos of the season in the professional WMX class were logged at Loretta’s on Saturday. The racing was superb, thanks in part to WMX Champion Kylie Fasnacht’s never-give-up spirit. In the first moto, young Hannah Hodges got out front early, and Fasnacht, not feeling well, threw up while running second. Once Fasnacht finally yakked, she started feeling better, and charged all the way up to pass Hodges for the moto win! In moto two, Fasnacht crashed early and found herself some 16 seconds down on Hodges. She got up and kept digging, and in the final corner of the final lap of the final race of the week, made the pass on Hodges to steal the moto and overall win.

On the other end, the ever-competitive Hodges won the Women (12+) amateur title, but was disappointed because she didn’t sweep all of her motos in that class. “We’ve got work to do,” she said, trying to smile while holding her WMX second-place trophy.

5.) This is Where Kids Become Stars

It’s the number-one tenant at this race, the one thing most critical to its success. There are many, many great and unique things about every class at Loretta’s and the entire weeklong experience in general. But nothing is more important than this: if a kid wins here, his or her life can change.

Ty Masterpool was already a name in the amateur ranks, but surely his double Supermini titles, which made him the AMA’s Youth Rider of the Year, signify next-level talent. These days, Supermini is stacked, and Ty did his winning on a TM. Teams are going to be all over him now.

In Mini Sr. Kaeden Amerine had never even made a Loretta’s podium before this year, but went 2-1-2 in his motos to lock down a championship. Team Green’s Nate Thrasher threw it away when he won moto one, but crashed while leading moto two. He ended up going 1-9-1. Thrasher showed he has the goods, but now Amerine can claim to be a player on the scene, and more support usually follows. It’s that very thing—getting discovered—that drives so many young racers and their families to build their lives around this race. Over 36 years, much has changed, but as long as that stays the same, nothing really does.