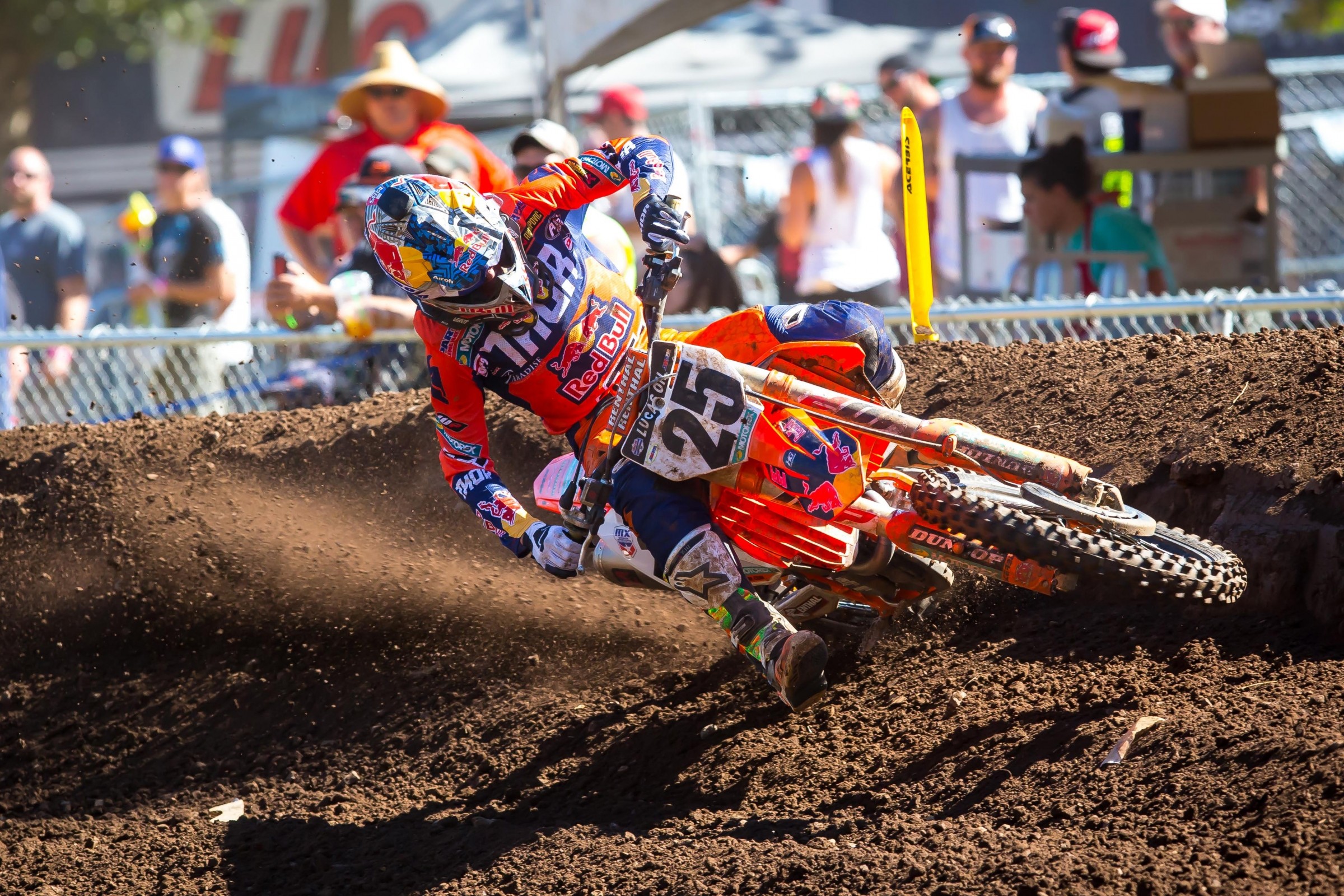 We decided to change things up a bit this week, so we gave Jason Thomas and Steve Matthes their choice of three questions to answer. Here's what they came up with.

1.) Taking all of the variables into consideration, who will end up riding for Team USA?

Assuming we go (which I think is still in question), I will say Zach Osborne for MX2, Cooper Webb for MXGP, and Jeremy Martin for Open. There is so much uncertainty around this situation so I am purely guessing. I hope we get some clarity at Unadilla, but I don't know how we could have solid answers quite yet.

2.) Is Marvin Musquin going to take over these last three rounds of the series or will Eli Tomac bounce back?

I think it will be somewhere in the middle. Musquin and Tomac are both really good at Unadilla, so that should be an awesome showdown. I’ll give the nod to Tomac at Budds Creek as I think it suits his style a bit better, but Indiana could swing back toward Musquin as Tomac could be thinking championship on that last Saturday. Musquin has all of the momentum after four straight moto wins, but he is still over 50 points down for the title. Musquin may get Blake Baggett for second place in the points standings, but as long as Tomac keeps it on two wheels, Kawasaki may get their first 450 title since Ryan Villopoto left the building.

Well, its August so this is crazy early, but it's still fun to think about. Ken Roczen is ahead of schedule for his return and is vowing to win. Tomac won nine (should have been 10) races last season and is about to win his first outdoor title. Musquin is looking to be KTM's #1 guy and has made big strides this year. All three of them will be going in as contenders. When it's all said and done, I will take Tomac, though. He was so good this year other than the first few races. He was able to come from behind and win from the front. If he weren’t a mess at the opening rounds, he would have won the title pretty easily. Even though I think Roczen will be better than expected, I think he will need a bit of time to get back to his best level. Musquin will be good and win races, but I think Tomac has a bit more, especially at races where the whoops are a big factor. Tomac is the man to beat.

We've gotten into this massive race to be first in this world whether it's on social media, CNN, Fox News, or whatever, and this is carried over into the motocross world and frankly, I don't like it one bit. We've got next year’s motorcycles in the dealerships in July; we've got next year’s gear being unveiled halfway through the Lucas Oil Pro Motocross season. In case you haven't noticed, this has been going on earlier and earlier every year. Soon we'll have the launch of next year’s bike or gear by round five of supercross. The companies are all doing this to get your dollars in their pockets before you can think about going elsewhere, but it is a bit strange to see this stuff just inching closer and closer to the start of the previous year.

I don't like it but guess what, it isn’t going to stop. Just be warned that as soon as you buy that new gear and new bike, it's out of date.

Every year when Loretta Lynn's kicks off I get tweets/emails that it's so unfair that former pros like Mike Brown, Barry Carsten, Buddy Antunez, etc., are allowed into the Vet classes at the ranch. That's just laughable to me that anyone would complain. I mean, these guys love to ride their motorcycles, are they not allowed to come out and race? MX Sports has done a good job of tweaking the rules to not allow these guys in the 30+ classes, so at least there's a nice spot for you complainers to race. Look, I hate to be the one to break this to you Mr. Vet Hero, but the factory ride dream is over. No one is going to sign you to a deal because of a Vet class win at the ranch. Just enjoy lining up, trying your hardest, and see where you end up. Who knows, maybe you get to race one of these guys or something, but at your level. This is all for fun, bro, stop being so bitter and enjoy yourself. These guys are just like you, only better. #Sorrynotsorry

3.) I don't listen to podcasts and have no idea what they're about or how to get them.

Seriously, it's time to jump into the deep waters of podcasts. It's not hard. Every single smartphone sold today has a podcast app built into it. It's a new way to be a moto fan and I'm not just saying that because I do so many of them. Heck, go check out Daniel Blair's show or the DMXS guys if you think I'm a goof. There are plenty of ways to avoid me!

Podcasts are like a deeper, more in-depth version of whatever topic you're interested in. If you're just into the current crop of racers, there is a Racer X review of each race with Jason Weigandt and JT. If you're a fan of moto back in the day there are one-on-one podcasts with just about every great rider out there, no matter the era. Bob Hannah, Ricky Johnson, Jeremy McGrath, James Stewart—I've talked to most of them all for an hour or more about their careers.

If you're into riding your bike every week and racing, Kris Keefer has a great show reviewing products, new bikes, and how to set up your bike. If you're into fantasy motocross, we do a weekly podcast that covers two or three games you can play to make watching the races more intense. If you want a short preview of the upcoming race there is one on Thursday's that you can call in and ask a question. We also have the Race Tech Suspension: Privateer Island Life show that features privateers and details their struggles. And if a long morning radio-type show that covers a lot of different topics is your thing, there's the Pulpmx Show on Monday nights. And finally, if you love hockey, I do a weekly (during NHL season) podcast with 18-year NHL player turned analyst Ray Ferraro about what's going on in the game.

I’ve found myself listening to more and more podcasts and less and less radio over the last few years. Mostly sports, but some true crime ones and podcasts are a massively growing medium. If you're a moto fan, there's a show for you out there. Don't be scared ... try it.