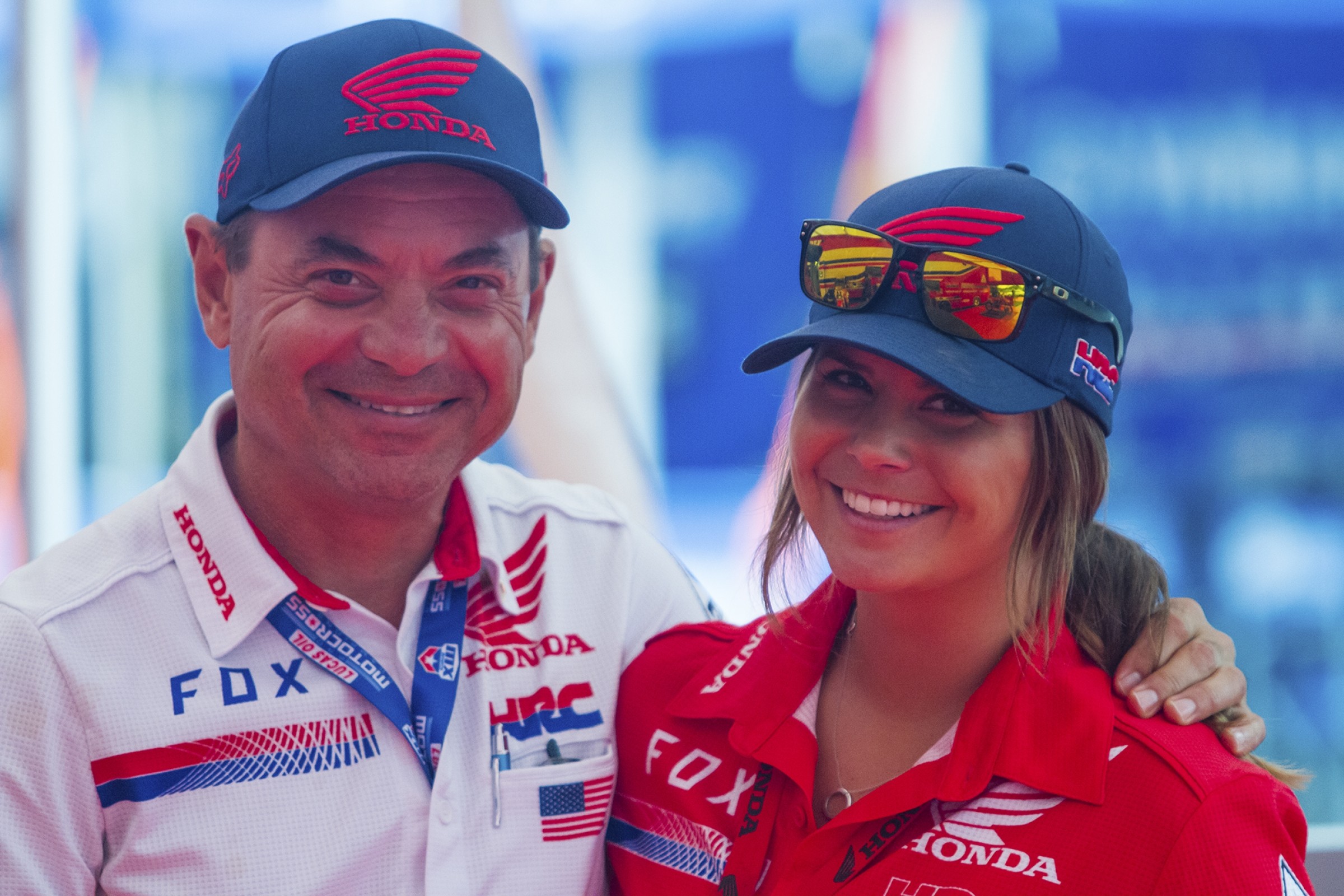 Mandie Fonteyn, originally from Temecula, California, is Honda HRC’s press manager. She has an off-road background and knew she wanted to work in the industry from an early age so she took the steps to get there. She went to school for sports marketing at California State University, San Bernardino and has been with Honda HRC for more than five years.

I spent some a few minutes talking to Mandie to see what it's like to be a press manager and see if she had any news on Ken Roczen’s condition.

Racer X: How did you get into motorcycles?
Mandie Fonteyn: I grew up around riding. My dad used to ride and it was a coincidence that my best friend that I met in kindergarten and her whole family was really into riding. I went to the desert for the first time with them and jumped on a PW50 and they couldn’t get me off it. So we bought my first bike two weeks later. So I grew up going to the desert with my friends and my family. At 15, I decided that I wanted to start racing off-road—I’m not much of a motocross rider. I don’t like jumps. I’d rather ride up in the mountains, in the trees or in the desert. I grew up racing District 37 desert races, as well as grand prix and hare scrambles. Then I did WORCS racing and every year we go down to Mexico to do the Tecate race. I knew very early that racing wasn’t something that I could make a career out of or at least make the kind or money or security that I would want so I decided that I wanted to go to school for sports marketing and communication and I wanted to try and get a job in the industry. It’s all worked out.

What has been your path through the industry?
While I was going to school I actually worked the gate at Glen Helen for about a year. It would be Thursday practice days if I didn’t have class and some Saturdays and Sundays.

Then, I actually got really lucky basically getting my dream job right out of college. I’ve only worked with Honda. Two weeks before graduation I got a call from Jean Tuner who was working with Cycle News at the time and who I also raced with. She knew that Stephanie Nutt, who was formerly with Honda, was getting ready to go over to KTM and Jean told me, “I think this is something you’d really enjoy. Maybe you can reach out to Stephanie and see who you need to contact for an interview.” So I had an interview with Ken Vreeke at Vreeke and Associates, who initially had the Honda contract. I had my in-person interview at their office and I left there thinking it went well, but I wasn’t sure that they’d hire me right out of school. I had the racing and industry knowledge, but no experience. Well, I got a call back saying that they really liked me and that they wanted me to come back to do a second interview, which was going to be at the team photo shoot; I was to help facilitate it. They also wanted to make sure the team liked me because I was going to be totally integrated with them throughout the season so it needs to go both ways. Eric Kehoe was team manager at the time and [Justin] Brayton and [Trey] Canard were on the team. I went to the photo shoot and I think I was shaking the entire day. It went well and my first day was actually Anaheim 1 press conference in 2012. I’m currently with my third agency, but still working with Honda.

That’s interesting. So Honda has switched agencies, but they tell them, you need to hire Mandie?
Kind of. Luckily I’ve developed a good relationship with Honda to where they want to keep me around. They have contracts with agencies for the press department and the racing department and the contracts have been up twice since I’ve been affiliated with them and they’ve transitioned to a new company and luckily they’ve said, “We’d like to stick with Mandie.” So I’ve interviewed with the new companies and they’ve hired me on.

What’s it like working for Honda as press manager? What’s it like to be you?
I love Honda. I love my guys, my team. If you ask them they would probably call me team mom. I’ve been blessed to work with really great and easy riders and people. It’s not like I have to pull teeth to get certain things done, which is nice. I’m the Honda HRC press manager so my whole job is facilitating interviews with the riders, whether it’s TV or magazines. I do the photo shoots, the press kits, the posters, autograph signings for both at the track and dealers signings, press days, anything dealing with that. If the guys need food between practices I’ll make them a sandwich, whatever they need.

Sandwiches, that’s probably not part of the job description?
That’s definitely not part of the job description, but we’re there to race and they’re there to do well. If there’s anything that I can do to make the day go easier for them or more streamlined I have no problem throwing something together for them, if lets say they need to eat, but they’re watching film. I have no problem.

Team Honda HRC has obviously had an up and down season. Everything started so well with Ken jumping on the bike and riding well at Monster Cup and then the first two rounds of supercross before he got hurt. What’s it been like since you lost Ken?
That was obviously a really hard situation. Everybody was excited after Monster Cup because for the most part it went really well (Ken won two races, but also had that crash). Then the excitement continued with Ken winning the first two rounds of supercross and Cole [Seely] was also riding well. When Ken crashed (at Anaheim 2), it definitely took the wind out of our sails a little bit. That night was hard because you have one rider injured and another on the podium, so there were mixed emotions for sure. As much as we were bummed and upset about Ken, it’s a two-rider team and we had to stay focused and confident in Cole. Since then we have had a string of ups and downs in terms of injuries. Cole got hurt towards the end of supercross season, then Christian [Craig], who’s filling in for us during motocross, got hurt a couple weeks ago at Glen Helen. I think we just are taking it race by race and trying to just regroup every time and get back towards the front.

How is Ken doing these days?
He’s doing well. I haven’t talked to him a ton. I know our team manager Dan [Betley] and obviously his mechanic, Oscar [Weidman], keep in contact with him. I know he’s doing really well though. I think everybody is pleased with how he’s progressing. He keeps his fans pretty updated on social media. He posted a nice little video on Instagram of him on a bike.

Thank goodness he was wearing a helmet. That was my thought, “Hey that’s awesome, good thing you have a helmet on!” [Laughs]

heart is smiling. @honda_powersports_us I gotta stay away from the track. Makes time go by slower.

You mentioned to me before that he had physical therapist or trainer come to live with him or close by?
Yeah, after he had the last surgery, he’s been going to physical therapy full-time. I believe within the last 3-4 weeks he’s had a physical therapist basically full-time with him. I believe the original plan was to have him living in the guesthouse, but he may be in a hotel or an apartment, but either way he is on hand to do sessions everyday and really get him further along.

What do you really like about working with Honda?
It’s a combination of everything. I really enjoy all of the people on the team and have developed great relationships with all of them. The traveling is fun too. As much as it does get old in the middle of the season living out of a suitcase and missing all of the fun things with your friends at home on the weekends, I always put it into perspective. I can’t complain watching motorcycle races every weekend. My job is to go to a dirt bike track. There are fans that tell me, “You have the coolest job. I can’t believe you do this for a living.” So when I get down on missing out on a weekend on the boat or whatever, I think, it could be a lot worse. I could be doing something that I dislike. I think that’s the biggest thing. It’s not work if you love what you do. I truly love the people that I work with, the riders I work with, and traveling.

When are you going to be lining for your next race?
Not for a while. I don’t ride nearly as much as I’d like to anymore. The only race that I really do every year is in Mexico and it's actually the same weekend I’m getting married so I’ll be missing that one.

Maybe you can do both?
It’s a little bit of a far drive. I think its 12 hours, maybe more. Someone who is coming to the wedding looked it up because he was really bummed that I was getting married the same weekend of the race so I had to tell him, “Sorry I didn’t think about that when I was picking my date.”