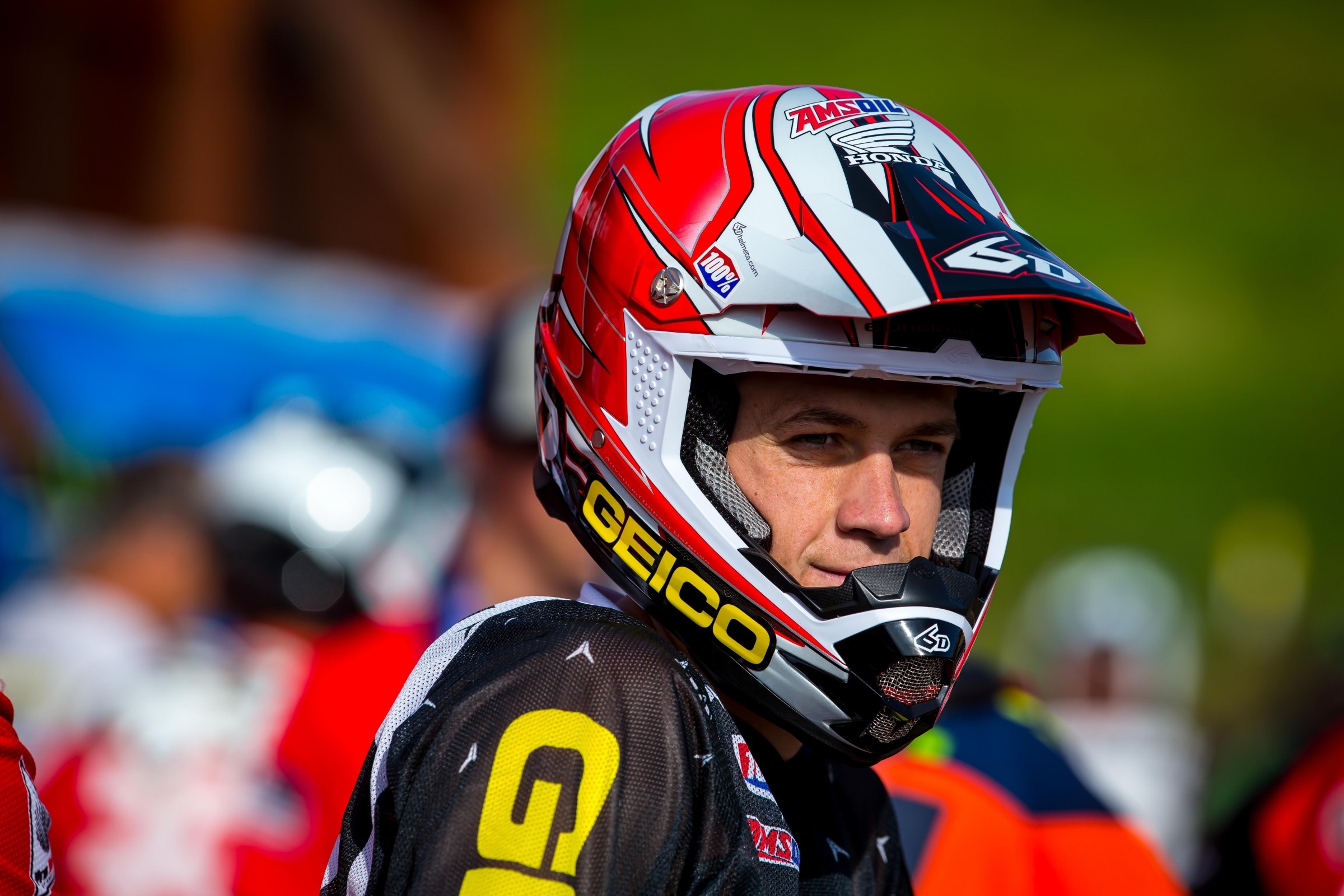 This season’s been pretty unpredictable so far and the nomadic nature of the red plate in the 450 Class backs that up. Eli Tomac had it after Hangtown, only to surrender it to Marvin Musquin at Glen Helen. Musquin held it through Thunder Valley, but coughed it up to Blake Baggett after High Point. Baggett put in a miracle charge in the second moto at Muddy Creek to hold onto the red plate, but now only leads Tomac by a mere four points. Who’s going to be sporting red after RedBud? –Hansel

If you’re Jeremy Martin you’ve got to be wondering what you did to draw the ire of the moto gods. His hard luck started in the first moto of the season when his engine let go at Hangtown, and then he went down all by himself when he hit a slick spot while leading the second moto at Glen Helen. Things took another bad turn at Muddy Creek, where multiple crashes limited Martin to just 22 points on the day. He now sits in third and trails points leader Zach Osborne by 36 points. He’s far from out of it, but he needs to work on erasing that deficit at RedBud if he wants to keep his title hopes healthy. –Hansel

Jason Anderson has been rather vocal about his hunger for victory lately, and he was as close as he’s ever been last week at Muddy Creek. Anderson ended the day tied for the overall with Tomac, but unfortunately for Anderson, came up on the short end of the tiebreaker on account of Tomac’s superior second-moto finish. It’s still a step in the right direction for Anderson, and considering how well he’s been riding lately it’s hard to think that elusive first overall win is far off. Could it happen at RedBud? –Hansel

Weston Peick came into the 2017 season of Lucas Oil Pro Motocross dealing with a wrist injury, and as tough as Peick is, a glance at his early-season results make it pretty clear the injury was limiting his performance. But judging by his riding at Muddy Creek, that just might be a thing of the past. Peick went 4-4 for fourth overall last week, by far his best result of the season. We’ll see if he keeps this turnaround on track at RedBud. –Hansel

After breaking a bone in his hand at Glen Helen, Christian Craig had a quick surgery and tried to come back after only missing one round. It was a valiant effort, but his hand simply hadn’t had enough time to heal and he was forced back to the sidelines after High Point. But now that his hand has had more time to mend, he’ll be making another return to action, this time at RedBud. Hopefully for Craig, and Honda, things go better this time around. -Hansel

Currently working with Adam Cianciarulo and Dakota Tedder, Nick Wey hasn’t competed in a professional event since Las Vegas 2016, where he finished 18th in the 450 main event. The DeWitt native will return to racing this weekend at his home track—RedBud. Wey last competed in Lucas Oil Pro Motocross in 2014 when he finished 26th overall at Budds Creek. We’ll see how Wey does in his return to the Nationals. –Chase Stallo

“My tongue is still on the track. Just didn’t have enough juice in me.” Is what Red Bull KTM’s Trey Canard told Racer X’s Kyle Scott following his return to racing last weekend at Muddy Creek. That’s expected, as Canard hadn’t competed since March, and as any rider will tell you, you can’t replicate racing. Despite dropping back to 10-11 moto finishes, Canard showed his trademark speed that made him a past 250 Supercross and Motocross champion, and 450 race winner. It will certainly take a few rounds for Canard to get adjusted to the front-runners speed, but if you had any doubts that he still has “it”, they were quickly answered last weekend. - Stallo

In the second 250 moto at Muddy Creek, Troy Lee Designs/Red Bull KTM rookie Sean Cantrell had a scary crash, which forced him out of the moto. It came directly after a season (and career) best seventh in the first moto. Cantrell checked out okay and will race this weekend. The rookie has been a surprise, putting in three moto top 10s through five rounds. Can he return to top 10 this weekend? -Stallo

Getting Back on Track

It’s been a strange season for Monster Energy/Pro Circuit Kawasaki’s Joey Savatgy. Through five rounds he has just one moto win and is seventh in points. During the same span in 2016, he won five motos and was leading 250MX points heading into RedBud. When he’s been on—first moto at Glen Helen; Thunder Valley—he’s been great. But, for one reason or another, he just hasn’t been able to put it all together. He finished second in the first moto at RedBud a year ago before a big crash in moto two took him out of the running for the overall. Can he get back on track this weekend? -Stallo

As a true privateer, Fredrik Noren continues to put in great results in the 450 Class. Currently 14th in points (the 13 riders ahead of him are all factory supported) Noren scored his first moto top 10 of the season last weekend at Muddy Creek with an eighth in moto two. In 10 motos this season, Noren has yet to finish outside the top 15. Can the privateer keep up his strong season this weekend? -Stallo