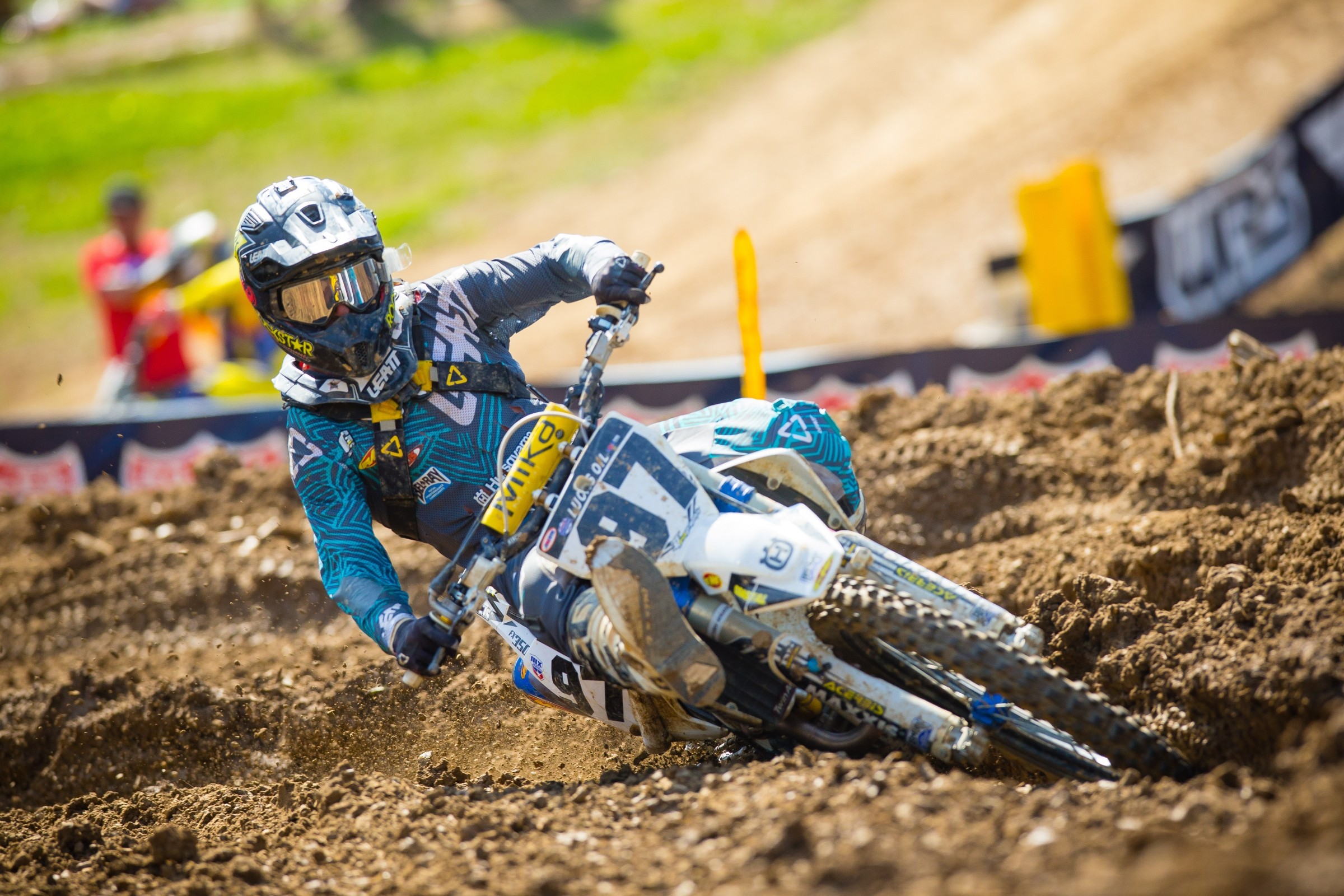 High Point was a brutal test for the riders last Saturday. Going into the weekend, most were wondering how the new layout would play out (I am also a poet). What we didn’t expect was the heavy rains on Friday night that would completely change how the track shaped up. Qualifying practice was a mudfest and the first sessions were basically useless. Lap times dropped by nearly 15 seconds from session one to session two as the bulldozers did their work. All of that mud and soft dirt left its mark, though, as deep ruts formed as soon as riders resumed their laps. As that dirt hardened throughout the day, those ruts became tougher and tougher to navigate. A rut that would give way early in the morning had become much more treacherous in the motos. All of this treachery caused riders to ratchet up their technique in order to excel.

When a track becomes as rutty as High Point was, every little aspect of technique becomes important. Small mistakes and missteps become very costly in these conditions. On a flat track with no ruts or bumps, most decent riders can get through a section within a reasonably similar amount of time. The motorcycle will do most of the work and without any track difficulty, riders can get away with laziness or sloppiness. Not so when conditions deteriorate. The ruts demand perfect body position. The sticky dirt demands perfect engine RPM. The bumpy downhills demand an ability to keep the front wheel light and big confidence to carry speed. Let’s take a look at each of these.

When cornering through a long, deep rut, proper body position is critical. When done correctly, a rider will enter the turn and transition from standing to sitting and in doing so, slide forward. That forward slide puts pressure on the front tire, giving the rider leverage and traction to put the bike where he wants it. That control is imperative as the rut demands precise input. If the rider is too far back, the door is opened for mistakes.

A few common scenarios play out if the rider is too far back. Most commonly, the rider will lose front end traction and simply fall over. This is easy to diagnose as the rider is typically chasing the bike through the turn, dabbing his inside leg over and over, usually in vain (see Cunningham crash).

Another scenario is a bit more complex but everyone reading this has probably lived it. As the rider enters the turn, they are too far back and come in a bit too fast. Without front end leverage, the bike buries into the rut and all of that excess momentum stops suddenly. Momentum can be a real Debbie downer and in this scenario, the rider is sent over the far side of the rut as his momentum didn’t stop when the bike did. This is a typical high side crash under braking. This is exactly what happened to Josh Grant in the second moto as he tried to hold off Marvin Musquin. He entered the turn way too fast, got out of position, and pushed past the rut. He came in much hotter than he typically would but this exact scenario happens to riders around the world every day. Both the rider’s momentum and the bike’s momentum need to be in unison for an ideal corner execution. Josh showed what happens when that gets out of whack.

Engine RPM plays a big role when the dirt is as sticky as it was Saturday. Four strokes have taken a lot of the work out of this situation but times can still vary depending on how rider’s use engine power. The 250 class was easier to see a difference as less torque and horsepower demand more precision. The sticky dirt puts a heavy load on the engines, transferring that demand to the rider’s clutch hand. If the dirt is hard and engine friendly, simply applying throttle will allow quick acceleration. The hard dirt will allow the wheel to spin up far easier and the engine won’t have much of an issue propelling both rider and machine forward. As the traction increases, though, that engine load jumps up exponentially. The engine will struggle to build RPM and as it takes longer to get to ideal acceleration,  and the rider loses time. The sticky dirt just increases the need to do everything perfectly in order to go as fast as possible. For a real life example, the next time you are on super tacky dirt, roll out of the turn and simply apply the throttle. Then, the next lap, add some clutch provided RPM and explode out of the same turn. That difference in acceleration may be a bit dramatic but it gives you an idea of how much time can be gained or lost by nailing the acceleration RPM.

The last scenario is the epic downhills we saw at High Point. These were good passing zones for many riders but that took great technique and big courage. For the courage, I can’t do much for you on that. High speeds on steep downhills can pay big dividends but it can also carry heavy penalties if things go wrong. Many of the passes made last weekend were made by simply pushing harder down the hills. In order to do that, one key ingredient was shared by all: As they barreled down the hill, the riders kept their weight back and made sure the front tire stayed light. Allowing the front tire to graze the tops of bumps kept the riders from being bumped forward into an “endo” situation. (Endo is short for end-over-end and is always a bad idea).

When coming down a hill at high speed, gravity wants to push you forward and in doing so, puts a heavy load on the front end. That load is dangerous as the forks are compressed and not prepared to absorb a big bump. Being too far forward and hitting an unexpected bump is a great recipe for an Instagram video. So, as simple as it may be, when practicing your downhill speed, always remember to keep that weight back. It will give you more control, allow the forks to absorb the bumps, and most importantly, give you more time to react to a mistake.

Technique is something that I always struggled to perfect. Riding with guys like Chad Reed, Tim Ferry, and Michael Byrne made me realize just how bad my technique was. They spent thousands of hours improving their technique until it was habit. Even though I struggled to master it, I learned what I was supposed to be doing. Pro riders don’t develop speed by accident. They practice and practice and practice until they don’t even realize how incredible their skill level is. By taking it corner by corner and really examining what they are doing, though, everyone can learn the “how” of their elite skill set. Every movement is intentional. Sliding forward entering the turn, rolling through the turn but having RPM on tap to explode when able, and knowing precisely where and how to safely maximize speed on a treacherous downhill are skills that can be learned. If you ever watched me race, you know that practice doesn’t make perfect. Practice does make better, though.