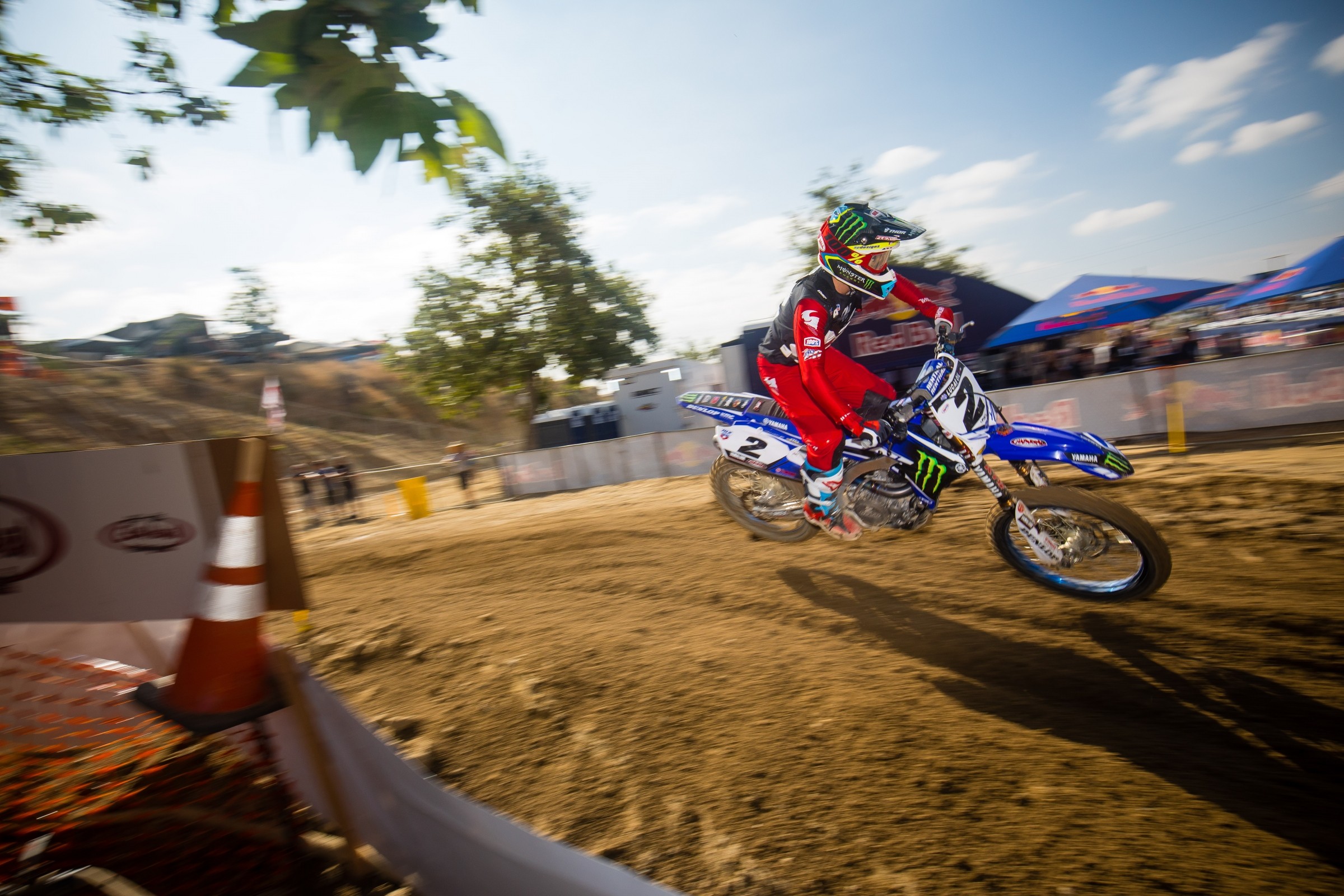 Back in the days of carburation, getting bikes dialed in for the elevation of Thunder Valley was much more difficult than it is now with fuel injection, which compensates for the thinner air. And thanks to a pressurized fuel system, fuel is much less likely to boil (liquid boils at substantially lower temperatures at higher altitudes). But not all altitude-related issues are solved by fuel injection. Thinner air means less horsepower. But how much less? Last year Monster Energy/Pro Circuit Kawasaki boss Mitch Payton told us they estimate roughly a 16 to 18 percent loss at Thunder Valley. That’s significant and riders, especially those on 250s, will have to be mindful of their tamer power deliveries on the jumps and hills of Thunder Valley. –Aaron Hansel

In the past, the elevation at Thunder Valley, which is roughly 6100 feet, has wreaked havoc on Jason Anderson’s performance. Just last year Anderson was running third in the first moto before he had to pull off and throw in the towel due to altitude sickness. When asked about his condition at the post-race press conference last week at Glen Helen, Anderson seemed confident he’d have a handle on it at Thunder Valley. “I was okay at Salt Lake [City Supercross], so I feel like we got whatever problems I had fixed for the most part,” he said. Anderson, who won the second moto at Glen Helen, finished third that night in Salt Lake City. Then again, the elevation there is 4,225, nearly 2,000 feet lower than Thunder Valley. We’ll see how this situation plays out on Saturday. -Hansel

Okay, so Bradley Taft isn’t a true rookie in Lucas Oil Pro Motocross—he raced the final three rounds of 2016—but this weekend will mark the first time he’s raced the Thunder Valley National. Taft made his return to racing last week at Glen Helen after suffering a traumatic brain injury in January and he showed promise, running third early in the first moto, and fourth early in the second before fading. He finished the day with 14-17 for 16th, which isn’t ideal after such good starts, but you’ve also got to expect a bit of a fade after such a long layoff. If he can get more good starts on Saturday, it’ll be interesting to see if he can hold position for a few more laps before throwing out the anchor. -Hansel

If anyone is suited to Lakewood’s thin air it’s Eli Tomac, whose home town of Cortez, Colorado, is roughly the same elevation as Thunder Valley. After experiencing a problem with his front brake at Glen Helen last weekend that cost him a gaggle of points, as well as the red plate, he needs to come back with a vengeance at Thunder Valley. He’s certainly capable of doing it too, but as we saw last week (and in 2015), you never know what can happen once the gate drops. Season-ending crashes, costly mechanical problems, or mind-blowing dominance—we’ve seen it all from Tomac. What’ll we see this Saturday? -Hansel

Things weren’t great for Justin Barcia at Glen Helen. After going 11-5 (he crashed in the first moto) for ninth overall at Hangtown, Barcia didn’t do as well at Glen Helen, going backward in both motos for 13-10 and 11th on the day. Afterward he wasn’t happy, citing a poor setup as well as just plain struggling. Still, he remained optimistic about Thunder Valley, saying he likes the venue and that he would “come into Colorado with a clean mind and do the best I can.” We’ll see if he makes the right adjustments for round three. –Hansel

As we pointed out earlier this week, Zach Osborne’s 21-point lead after two rounds is the second largest since 2004 behind James Stewart’s massive 25-point gap in 2004. It doesn’t guarantee a title though; as only 53 percent of the championship leaders after two rounds have gone on to win the title since 2004. Osborne’s a perfect two-for-two after an unconventional overall at Glen Helen (4-2 moto scores), and has seemed in control just about every step of the way—aside from his nearly devastating crash in moto one last Saturday. Prior to joining Aldon Baker in Florida, Osborne spent time training alongside Tomac in Colorado, so the altitude shouldn’t be a factor this weekend. Can he continue his perfect run and stretch his points lead even further? –Chase Stallo

Nearly a week later, we’re still not sure what happened to Cooper Webb in the second moto at Glen Helen. The rookie only completed four laps last Saturday before pulling off. Steve Matthes reported earlier this week: “I checked with some people on the team and all I got was ‘He’s fine’ and ‘I have no insight for you’ so … uhhh … yeah.” Second moto aside, the defending 250MX champion has been rather quiet through four rounds, going 5-9-10-34, and is currently 12th in points. Well see if he can turn things around this weekend. –Stallo

When you lose a talent like Ken Roczen, there is going to be a significant drop off in results. Last year, while en route to his second 450MX title, Roczen won a staggering 20 of 24 motos and nine of 12 overalls. No one expected Broc Tickle or Justin Bogle to mirror those results, but the duo has been solid thus far. Tickle, who’s coming off a wrist injury, has started the season 7-7-14-4, while Bogle has three top-10 finishes in four motos. Replacing Roczen is no easy task (just ask Honda HRC), but Tickle and Bogle have RCH in a pretty good spot. –Stallo

Like RCH this off-season, Yamalube/Star Racing Yamaha was tasked with replacing Cooper Webb and Jeremy Martin, who accounted for the last three 250MX titles, as well as Jeremy’s older brother Alex (second in 250MX points in 2016). Dylan Ferrandis came over from Europe, and Colt Nichols moved over from CycleTrader.com/Rock River Yamaha to pair with holdovers Aaron Plessinger and Mitchell Harrison. Through eight motos, it appears to be a solid foundation for the Bobby Regan owned team. The four riders have accounted for one moto win, three moto podiums, and seven moto top-five finishes—numbers that could have been much better without Ferrandis’ crash at the opener. At Glen Helen, all four riders finished inside the top 10 overall. Let’s see if they can repeat the effort this weekend. -Stallo

Don’t expect Weston Peick to be 100 percent this Lucas Oil Pro Motocross Championship. The AutoTrader.com/JGR Suzuki rider told our Steve Matthes that he’d be around 80 percent this summer due to a wrist injury suffered in Monster Energy Supercross. “Probably the entire year I’ll be at 80 percent with my wrist, with strength and everything like that,” he said. “I have range of motion back, but the pure strength of it is the hardest part to come back from.” Thus far, Peick has managed to bite his lip and power through it, finishing an impressive fifth overall at Glen Helen. We’ll see if he can manage the pain again at Thunder Valley. -Stallo