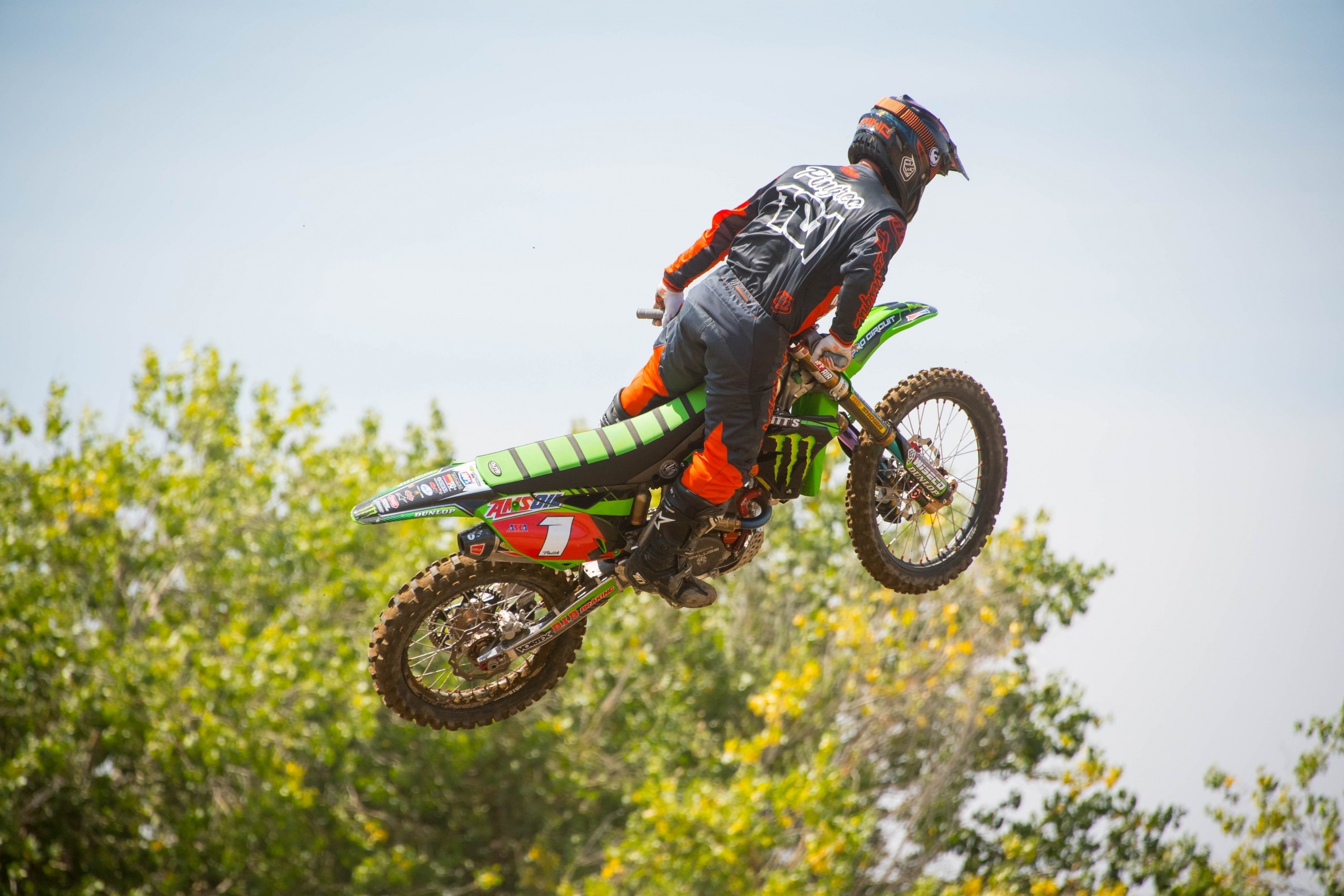 Big fan. What is going on in the 450mx class this year?? These guys are touted as the top 40 riders anywhere!  Yet after the 10 minute mark of the moto, you see guys rolling round not even completing the jump sections let alone competing, and getting lapped and retired guys like Cody Cooper being competitive. It was only one race, granted. But at the first round, first moto last lap, 3rd place was 20 seconds back! 5th place was 40 seconds back. If this truly is the best 40 guys in the world, where is the resemblance of close racing? 7/8 of the field would have got more outdoors testing done than Eli Tomac, and he made ‘em look like fools at Hangtown! I recognize Eli has a tremendous talent and ability on a motorcycle! I'm a big fan! But disappointed in the show and the quality of racing. Rant over.

Damo Aussie bloke who wants to see some battles!

I think it was a mix of the heat, the track being really rough/rutted, and the fact that there is a large speed gap between the elite few and the rest of the field. I know we just came out of a supercross series where the racing was close and the title was decided, literally, in the final turns, but it isn’t always that way. Tomac is faster than the rest of the field and probably will be all summer long. He’s already had some issues with the bike and some bad motos, which cost him the red plate, but I don’t expect him to get beat heads-up very often this summer. Behind him are a few guys that are close and then it drops way off to the rest of the pack. You can always look to the 250 Class for some good action. Or lawn mower racing. Take your pick, mate.

Commenting on a previous column about classes categorized by CC: I'd like to ask you to rethink the cc limit for an unlimited class. Who knows what it would bring up but it could be very cool and if not change again sometime. For example we played with a 6 valve head, Square 4 cylinder dirtbike. While this may sound wild and out of control let me tell you a bit more about it. The engine only revved to 2800 RPM redline so it was very, very reliable. Also since being low revving it was made out of simple metals and processes. Every bolt in the engine was (and in the entire bike) same length 4mm Allen. So the tool kit is also light.

The engine also only made 65 HP, but over 100 LB/ft of torque. Due to the cascading effect of simple design the engine and transmission together weighed 62 pounds, but in a package more compact than the current 250, 4 strokes, and the whole bike 202 pounds, with a center of gravity 30% lower than modern MX bikes. It made usable torque at 200 RPM and could idle at less than 100 RPM. Peak Torque at 600 RPM then stayed almost flat to redline. This wide, flat power band allowed use of a single speed transmission with a 2.5/1 torque converter even though it was capable of 130 MPH. Also, since even at top speed you are still in first gear acceleration was, let's say, exhilarating but very easy to modulate and control. This bike is easier to work on than a 2 smoker but more reliable than any engine ever. Valve springs changed by hand.

I tried to talk to the AMA and had conversations with Duke Finch that went pretty much nowhere but my contention is that 450 cc static is a number that invites expensive high revving engines. And that with our engine maxing at 2800 rpm we could merely reduce displacement to 1650cc and be the same number of revolutions per minute (which is reality) as a 450 revving to 10,500 RPM. Or an even better regulation may be engine weight classes. There are a few ways to make an engine lighter for a given output, mainly use exotic materials but much more simply spin it slower, make it more compact and not need harden ground cranks and camshafts. These reliable, simple, lightweight engines would probably be the norm had taxing and racing class regulations been engine weight instead of displacement. Such technology is used in locomotive, and ship IC engines. Many big engines idle at 500 RPM and redline at 950 RPM (yes less than a thousand)!

By the way our engine was fuel tested to 0.32 BSFC (Pounds of Fuel per Horsepower / Hour) that puts it right in the fuel consumption range of a diesel engine and almost 3 times better fuel economy than current 4 stroke MX engines.

So cheaper than a 2 stroke with transmission and all.  Lighter, more reliable, and economical too. Could bring dirt biking costs down dramatically. Crazy, right?

We also had chassis stuff down winning the 1989 BtoV 125 class with a 125 Cagiva and remade prototype chassis, some of which Kawasaki tested and used at the ‘89 Seattle SX before the AMA banned the bike, thus the funding.

We showed the bike to Roger Decoster at the 2004 Washougal national. He called all his mechanics who were already driving back to hotels turn around and watch use remove and replace both wheels in under 15 seconds each by hand. You see the rear sprocket is also the disc brake rotor and stays on the bike during wheel change. The rear swingarm coupled with the 3" diameter spindles had less torsional flex even though it was 30% lighter. I liked the feel of less flex but of course if a rider wanted more flex we could make unsprung weight even less. The front end was even stiffer and lighter at almost 40% weight reduction but at least 4 times less torsional flex. I found this stiffness at the ends coupled with a bit of flex in the steel chassis very nice.

Now as too the electrics I think once batteries are a bit better that will be the way. For guys who want loud just synthesize something make it sound like an old Class B rally car, or a fighter jet. For me I like quiet as it allows me to ride more places, the square 4 engine exhaust was quieter than its cam timing gears. And if you've ridden the electric bikes I would guess you'll notice sounds like the drive chain and the tyres squishing and thumping dirt more, as we did on this old quiet bike.

To me it's like politics in that I just don't understand it. Or why no one has come up with or at least copied the wheels or anything. Though at least KTM is using a hydraulic clutch like we did years ago.

Not the world we live in, I guess. Just some thoughts.

That was a long-winded rant, my friend, but for some reason I couldn’t stop reading. If your theory on engine performance is right I’m left wondering why you are the only guy I’ve ever heard of who built something like this for a bike. The wheels look like something from Winner’s Take All, a true Rick Melon touch. I believe there may be a time when we have a different set of standards for classification. Between the advancements in electric technology, two-strokes, four-strokes, and whatever it was you called the contraption you built, we have a nice set of options to go racing. And, personally, I’d love to see it opened up to any type of powerplant if we could find a way to classify them in a fair, competitive way.

They say presentation makes up more than half of somebody’s overall impression of a meal. With that in mind, I think you left quite a bit on the table in the looks department. But, hey, nice effort.

Not really a question for you. But more so a statement/fact. All opinions aside. Last weeks ask ping [Ed. Note: This was from the week after the Vegas SX finale] was equal to taking a dump on my own chest.

Every question was pretty much the same topic. All of the questions were things the average fan could observe. We want to know the behind the scenes scoop.

The week you are referring to was filled with opinions about Tomac’s race tactics and Osborne’s last lap pass. I gave my opinion, as I do every week in my column, on the questions I was sent and the vast majority of them revolved around those incidents. My main goal in life is to make the young, opinionated fans who read my column of Fridays happy. I haven’t been able to sleep through the night since receiving your letter and I assure you I will not rest until I can provide you with all the behind the scenes gossip I can find. Because what really matters is the hearsay between team members, who’s dating whom, and which rider said what about other riders. You’ve really set me on the straight and narrow, Brandon. Thank you for that. And, please, if you come across another column of mine that doesn’t sit well with you feel free to write another letter, print it out, and then shove it straight up your ass. Have a terrific day.