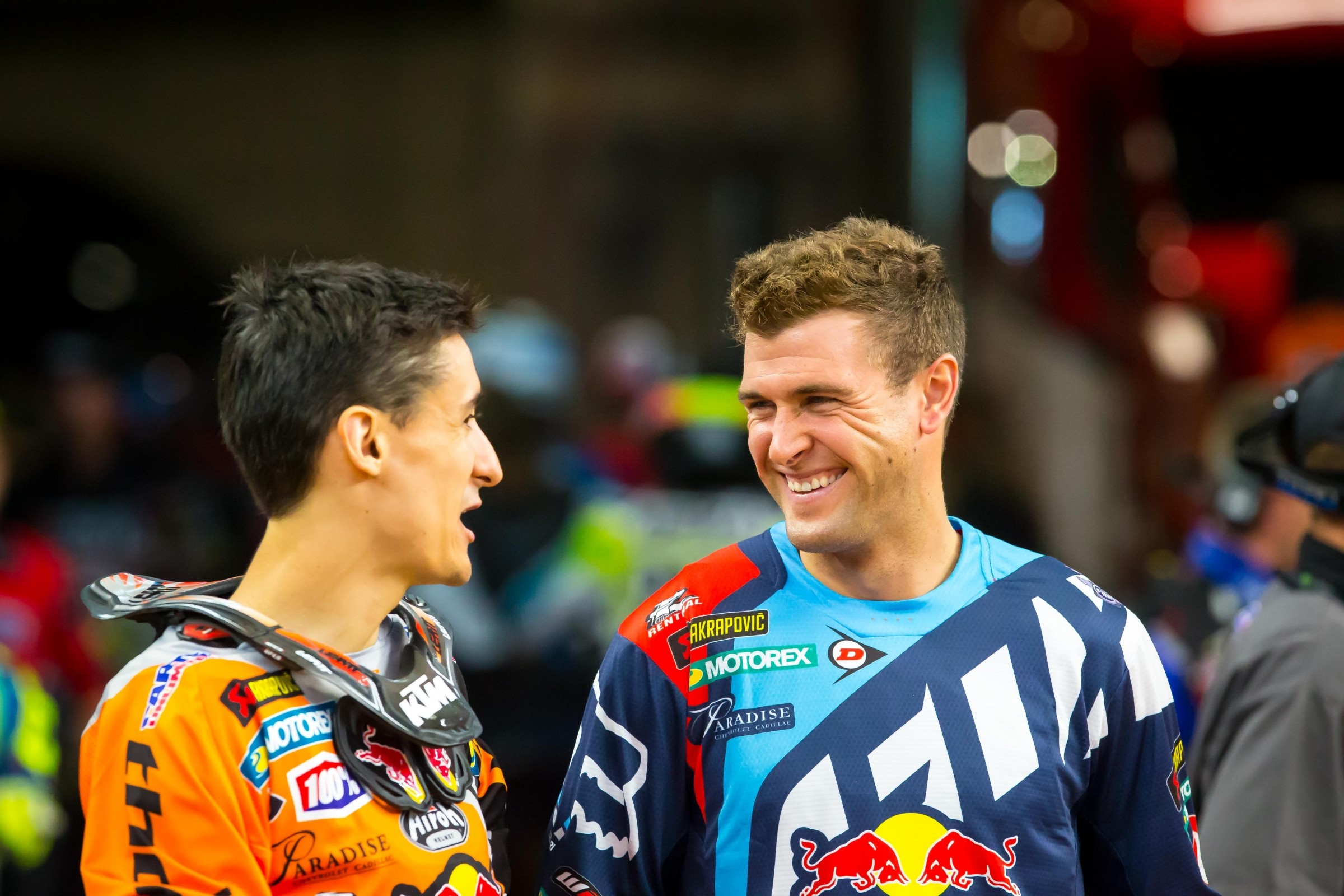 Lots of stuff happened during Saturday night's East Rutherford Supercross. Ryan Dungey recaptured the 450SX points lead over Eli Tomac and the 250SX East Region points tightened up to just one point separating the top three. By the end of the weekend you guys left 379 comments on our Saturday Night Live column and subsequently flooded my boss Chase Stallo's email inbox. So yeah, I'd say there was some interest and difference of opinions on what went down in New Jersey.

Let’s dive into the lap data to figure out how this race was won and lost with this week’s Sign of the Lap Times. First, our traditional lap time charts.

Of all the drama that went down on Saturday night, none has people more divided than Marvin Musquin intentionally letting Dungey by on the last lap of the 450 main event. After the race, Musquin said, "I tightened up a little bit on the last lap, and I got a good run through the whoops, but maybe too fast. That sweeper, that rut was really difficult. It was hard to feel the front end right there and I made a mistake." That explanation didn't convince many people that Musquin didn't intentionally let Dungey by on the last lap. I plotted out all 24 laps of their times to see if they showed us anything we might not have seen on TV. I also noted that Musquin made the pass for the lead on lap 11 with the vertical dotted line.

As you can see, Dungey was able to match Musquin's times pretty well after he got passed. You can also see a dramatic increase in times for Musquin on the final three laps. I don't know if we needed the lap times to see this, but it does solidify what we saw in person and on TV. Musquin backed it down for the final few laps.

The other dose of drama was given out by the 250 class, more specifically Joey Savatgy. A little over halfway through the main event things seemed to be settling down as Zach Osborne was running away with the lead and everyone behind him began to spread out. While running in second place, Savatgy went down in a rhythm section and ended up in between two lanes of the track. After picking his bike back up he proceeded into the next lane instead of re-entering the track where he originally went off. In the process he cut off a large part of the track. He went on to finish the race in third place, ahead of Jordon Smith who was in fourth.

We noticed they didn't show this too well on TV, so I went ahead and highlighted the section of the track Savatgy missed on that particular lap. You can see it's pretty substantial.

I timed Savatgy through the section that he missed a few times and each time it took him between six and seven seconds to get through, and remember, that's at full speed. Considering he would have had to work his way back onto the track and probably roll a jump before getting back up to full speed, it's not unreasonable to assume he saved close to eight to 10 seconds with this move.

Our own Jason Thomas did a good job of explaining the severity of the penalty earlier today, so I'll just direct you there if you have any questions about why they decided to dock Savatgy five positions. In the end, he received a clear advantage by re-entering the track halfway down the whoops.

Whether or not you agree with Musquin letting Dungey by or with the penalty dealt to Savatgy, we are in for one of the most exciting season finales we have seen in a long time. It's a winner take all situation for three different riders in the 250 class and although Dungey leads by nine in the 450 class, anything can happen. Bring on Saturday!