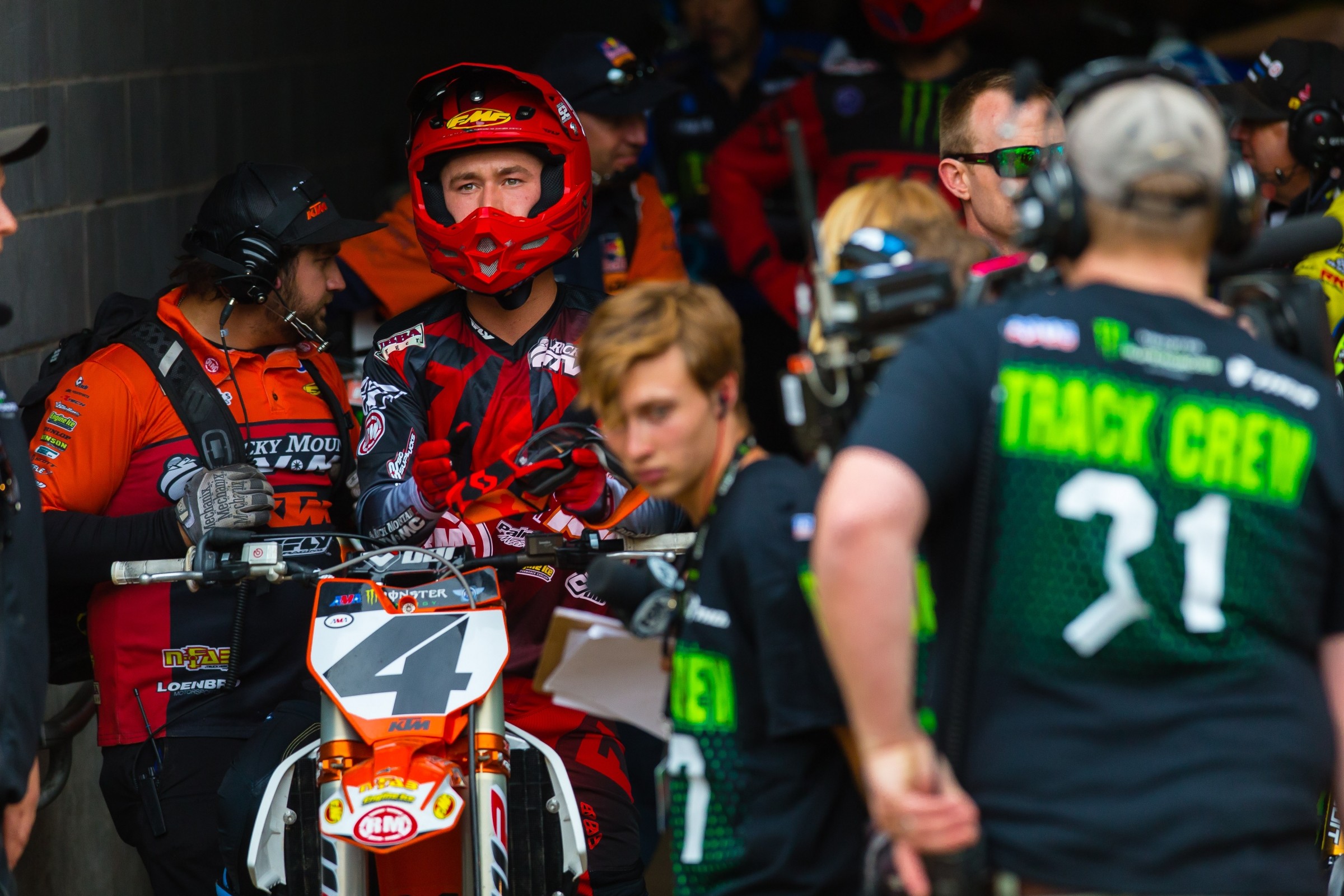 We are so unaccustomed to seeing a tight championship battle, that when we do, we have little to compare it against. Even rarer is what Eli Tomac did to erase 29-point deficit on Ryan Dungey to secure the points lead entering Round 16 of 17 in East Rutherford, New Jersey, this weekend. The most recent example came during the 2010 Lucas Oil Pro Motocross Championship, when Trey Canard won seven of the last 10 250 Class motos to erase a huge lead held by Christophe Pourcel. He still trailed by seven entering the finale, but a crash from Pourcel in the first moto gave Canard an easy run to his first motocross championship.

Tomac’s crash and bad race in New Jersey gave the red plate back to Dungey. The defending champion now holds a nine-point lead heading into Vegas.Tomac still holds the tiebreaker, so if he wins, he’ll need Dungey to finish fifth or worse; if he finishes second, he’ll need Dungey to finish eighth or worse; if he finishes fourth, Dungey will need to finish 10th or worse. The last time Dungey finished worse than fourth was East Rutherford … in 2014!

Tomac wasn’t made available for comment after the race, but he did release a statement in a Kawasaki press release. “At this point we’ve got nothing to lose,” he said. “So we’ll go into Vegas looking to get another win. Anything can happen and all we can do is stay positive.”

So, did Marvin Musquin move out of the way for his training partner, teammate, and friend, Ryan Dungey? According to KTM, no. According to everyone else, yes.

So, have you had meetings about all this? Do you sit everyone down in a room and decide what to do to help Ryan?
No. The only thing I say is, before the race, I say “Don’t race each other harder than the competition. And at the end of the championship here, please don’t take out Ryan. Give him some space. Just race.” That’s all I’ve ever said.

Dungey and Musquin spoke about it at the post-race press conference.

Rocky Mountain ATV/MC-WPS-KTM teammates Davi Millsaps and Blake Baggett entered the weekend tied for sixth in points. They proceeded to finish fourth and fifth respectively, with Millsaps putting two points between he and Baggett. With Cole Seely’s status still unknown for the weekend, Millsaps and Baggett, currently four and six points back of Seely, are in a tight chase for fifth in points heading into the final round. Forrest Butler can only smile after the season his team has enjoyed.

With Smartop/MotoConcepts not making the 2,000-mile cross-country trip from Salt Lake City to New Jersey, Justin Brayton pitted out of the Honda HRC rig this weekend. Brayton spent a year with Factory Honda in 2012, and many of the same employees remain, so the change wasn’t a big deal for the veteran. And it showed on the track, as Brayton tied a season-high with a sixth in the main event—his best finish since Glendale.

“Umm, it was a little bit [different], in the sense that obviously different people around—but kind of familiar faces,” he told our Steve Matthes after the race. “I still work real closely with all the Honda guys. [Cole] Seely is one of my best buddies. His mechanic is also one of my best buddies. The list goes on. Gothic Jay was my mechanic when I was there. Dan [Betley, current team manager] was the engine guy. Pretty much everyone that’s there was there when I was there.”

Although he reportedly suffered from arm pump late in the race, and had a crash, AutoTrader.com/JGR Suzuki’s Justin Barcia had his best race of the season. Barcia ran inside the top five early in the race, before the aforementioned problems. He held on for ninth, just his third top 10 since returning to action in Atlanta.

Rockstar Energy Husqvarna’s Dean Wilson finished 10th for a third straight race, but his day certainly showed more promise, as he qualified third behind Dungey and Musquin and ahead of Tomac. But, as Wilson explained in a team statement, he had trouble in the main event.

“I felt like my day was pretty solid,” said Wilson. “I qualified third, which was great. I didn’t do so well in the heat race, but rode great in the semi. I had a good battle with Seely. I was actually coming through the pack pretty well in the main event but got off the track and was passed by a few guys, then passed them back and was moving forward but then got cleaned out and crashed. I ended up 10th. It was a learning experience and I’m excited to come back swinging next weekend."

As we reported over the weekend, Monster Energy/Pro Circuit Kawasaki’s Joey Savatgy was docked five positions after he crashed while landing on a rutted tabletop, and fell into the next lane on the race track, and ended up getting on his bike and riding off through that next lane, instead of reentering the track where he had crashed. Not only did the penalty cost Savatgy a podium, it cost him the points lead. If he had retained his third place finish, he would have entered Vegas with a seven-point gap on Zach Osborne, and eight on Jordon Smith. As it is, Savatgy enters tied with Osborne, both one point back of Smith. Savatgy didn’t attend the post-race press conference, but he did issue the following statement via a Kawasaki press release.

“I don’t give up and after barely losing last year, I won’t go down without a fight,” said Savatgy. “This week, we’ll keep our heads down and work hard to come to Las Vegas at our best.”

Prior to the penalty being announced, we spoke with Smith about the position he now finds himself in entering the weekend.

There’s potential for you to actually be the points leader. Did you see what happened with Joey and what do you think? I don’t think this is something that happens often. How should it be handled?
I didn’t see what happened. I’ve only heard. What it sounds like to me, if they do the right thing I think they gave my teammate—whenever he was in the championship battle earlier this year—a penalty for going off the track or something. I just want them to keep it consistent. You can’t do it for one guy and not for the other whenever you’re in the same position. As long as they keep it consistent and do the right [thing]. I’ll go back and watch it and see what I think, but there’s nothing I can really do about it. I rode the best race I could, and what happens happens.

For you to be in that position, I think you said earlier, no one really expected this. Did you expect this out of yourself coming in?
Yeah, I did. I knew that I could be here. I didn’t fully expect that I would be in this position. I knew that I could if everything went right like it has this year. I was really comfortable and really happy with the bike and the team coming into the season. I was ready for it to get started. We got off to a really good start. I got some race wins these last couple races and closed that points gap. For me, that was the goal this season, to get some wins and try to be as consistent as we could on the podium. I think I’ve done a good job of that this year. It’s been a successful year for me. Whether I win the championship or whatever place I get, it’s been a great year for me. I’m just going to see what happens in Vegas and see what I can do.

This year has been an amazing turnaround for Smith. In his two previous years with GEICO Honda, Smith struggled with injuries and consistency. Prior to this season, he had just one career podium finish. This year he has two wins, and an additional three podiums—and more importantly the points lead with one round to go. If Smith wins the title, he’ll be able to defend it next year thanks to new tweaks to the AMA rules. We asked him about it after East Rutherford.

I think the consensus when the 250SX rules changed [last week] was someone in your position, it shouldn’t happen [getting bumped to 450 class in 2018 for winning title in third year in class]. Is that something you followed and something you were aware of? Obviously the talks came way before the AMA actually announced it, but were you aware of the situation and what they may be changing?
Yeah, I had heard the talks, the rumors that they might be changing it but for me, you can’t bank on them changing or them not. You never know what they’re going to do. But either way, I’m out here to win races. My team’s never won a championship and that’s what I want to ultimately do is give them their first championship. Whether they change the rule or not, my mindset was the same—win races and be as good as I can every weekend.

Do you think the changes are fair? Do you agree with what they decided to do in the end?
Yeah. I think it helps me out. If I do win the championship this year I think that it would suck for me to have to move up. So, I think it’s good for me. There’s going to be fair sides and unfair sides either way you look at it. Either way, you have to deal with whatever comes to you. It doesn’t really matter too much to me.

GEICO Honda’s Cameron McAdoo returned from a four-race absence (due to an injured hand) to make his debut with the team in East Rutherford. McAdoo said he got tight in the main event, but he still finished ninth for his second career top 10.

“East Rutherford had its ups and downs for me but it was a night that we can and will definitely build off of,” said McAdoo. “I got good starts in both my heat and my main which I was happy about. In the main I rode pretty tight but it was great to get back to racing after missing a few weeks due to the hand injury, and to finally get out there on my new GEICO Honda. The bike and team are awesome! It took me some time getting used to the track, it was so soft and rutted all day which made for some challenging racing for all of us. I can't wait to go dice it up with some West Coast boys next weekend in Vegas!”

Traders Racing Yamaha’s Luke Renzland, who was born less than an hour away from East Rutherford, in Hewitt, New Jersey, had his best finish since a sixth in Atlanta, taking seventh in front of his hometown fans. In support of the FDNY firefighters, Renzland and his crew also busted out some sweet mustaches.

The crew busted out some upper lip swag for the hometown race @mlstadium .. we did it to support the FDNY firefighters, nobody rocks a mustache like a classic firefighter!