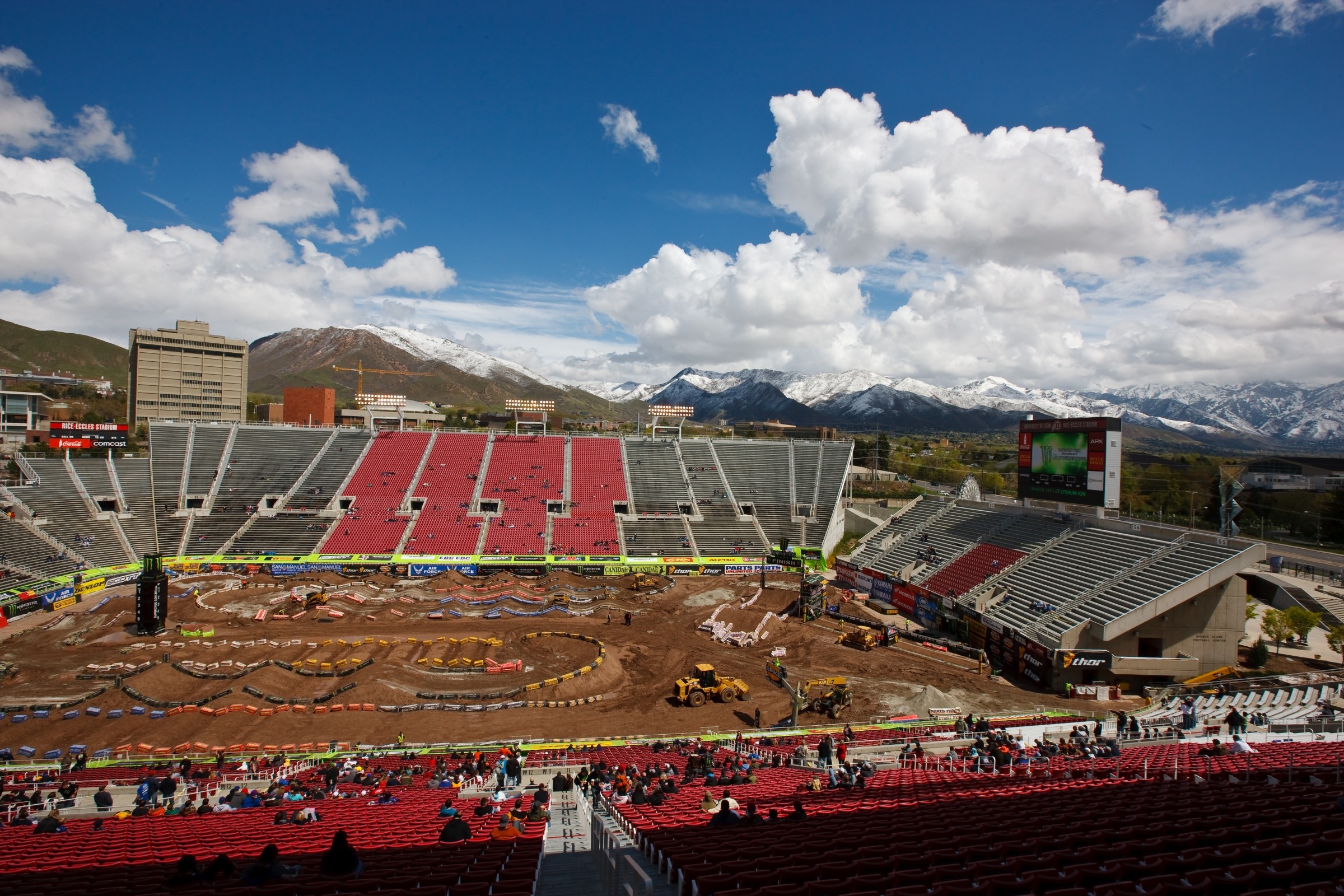 Utah, we are back!  After five years away, Monster Energy Supercross is roaring into Rice-Eccles Stadium. This venue sits on the campus of the University of Utah, nestled up on the hill above Salt Lake City. This race has some quirks and adds variety to the series. The outdoor venue is prone to iffy weather—we even saw snow in 2010. As of now, we are looking solid for Saturday as highs will be in the 60s with abundant sunshine. As someone who raced in that snow and rain filled Saturday night back in 2010, I am certainly thankful for a nice race day in Utah.

The elevation will create the biggest buzz throughout the pits as the bikes take a huge power hit. The engine builders and ECU engineers will be working feverishly on Saturday to keep their riders happy. That first lap on the track is always an eye opener as the engine feels sluggish and slow. The factory 450 teams will have tested different cams, pistons, and ECU settings long before the weekend, giving them some easy answers if necessary. Raising the piston compression is a likely fix but also takes away some of the engine reliability and can cause detonation. The ECUs are a god-send for teams nowadays, allowing teams to remap the fuel to counteract Utah’s lack of oxygen. Most factory 450 teams are holding back a bit when it comes to max torque and power at a standard sea level race. The riders simply can’t use that much power in most cases and it’s even tougher to get that much power to the ground. Salt Lake City provides a great chance for these teams to really show their potential, though. Riders will want any and all power available. Watch for those who get good starts all night and seem to be tripling out of the turns without much effort. Those are your clues as to who brought the power to Utah.

For the 250 teams, ECU manipulation is critical as most are already on the limit for power production. They simply don’t have any options left for creating more engine power without asking for a DNF. ECU technology is the safe variable, adding and manipulating power without removing reliability. This race might be the most pronounced advantage for the factory 250s. Watch the differences in the factory 250s and the privateer 250s when jumping triples or big rhythms. The torque and horsepower variance will be huge from rider to rider.

The track in Utah is always interesting to me because seemingly simple sections can become really tough due to the elevation and rain-soaked dirt. This rendition features a very long start, giving these oxygen-starved bikes a chance to show who is strongest. That leads into a long, wide 180 before a stadium-long rhythm section. This section has potential, folks. For the sake of fun, let’s look at the 450 options as the 250 guys will have to stay low and fast at 4,600 feet.

The fast line will be to triple in out of the turn but with bikes down on torque, it won’t be easy. If riders can get over the first three, that’s where things get interesting. There are two options to get out of the section afterwards. The first is the most likely and involves tripling again onto the second 3-footer, then jumping from the tabletop over two jumps and singling out. That table-over-two will be big. The other option would be to simply triple, triple, table-over-one, and double out. That’s the standard line for most main event 450 riders.

The last option I haven’t mentioned is not for the meek. If anyone watched press day from MetLife Stadium in 2014, they would have seen this option come to life. It’s to triple out of the turn, then quad over the tabletop and triple out. Big, fast, and unlikely. The determining factor will be that first triple strangely. To get enough “pop” to quad, riders will have to land in what we riders call “the pocket.” Simply put, to jump far enough to quad, riders will have to use every inch of fork compression landing from that triple. To maximize said compression, riders need to land right at the bottom of the triple landing and as the forks unload, coincide with the take-off of the quad. It has to all be one motion, getting all of the upward rebound that physics allow. Landing at the top of the triple landing will preclude any chance of hitting the quad. The forks will unload early and be extended when hitting the quad take-off. That’s a recipe for jumping very low at best and a huge endo at worst. Neither of those will create the right recipe to jump a quad.

(Fun game: if you are ever trying to see who is debating a huge triple or quad such as this, watch for who is jumping into the “pocket” and who is just blowing through the take-off with speed. The riders who are jumping into the pocket are sizing up the big option, working up the courage to leave that throttle on when they land. It’s the #1 clue as to who is thinking what in a rhythm section.)

On to the next section and although we will see some big jumping here, it’s a bit more straight forward. There are two basic strategies. The first will see 450 riders triple out of the turn, go table to table, and triple out. The second will be an easy double out of the turn, the step onto the table, onto the next table and ideally step off, double. Both of those will be similarly fast so it will come down to which is easier and more efficient.

The “finish line triple” is next and I am not sure what’s up with this variation, but I am not feeling it. It’s been changed a few times already so let’s see what happens Saturday. A short double leads riders into a sweeping straight away past the mechanics’ area. A 120-degree left puts riders into a short double and medium sized whoops section. Whoops have been all over the map for SLC. They were really big in 2001 and 2009, tiny because of the mud in 2010, huge again in 2011 and then small again in 2012. What 2017 brings is anyone’s guess.

There are three big jumps coming out of the next 180, giving riders the option to triple into the next berm or double-single to the inside. The cat and mouse game will be in full effect as riders jockey for position entering the start straight. Tripling into the outside will be fast, but opens up the inside to block passes and general shenanigans.

Which Cooper Webb will we see?

Will Eli’s approach be any different now that he isn’t chasing?

Aaron Plessinger won Seattle in convincing fashion after the long break. This is what we expected coming into 2017.

Marvin Musquin’s last four races have been solid: 2-2-3-1. He has had some horrible races that really put him out of this title chase, but the talent and ability are there.

Dean Wilson was improving weekly but his starts have taken the wind out of his sails. If he wants to beat the guys in front of him, he needs to go with them at the beginning.

Blake Baggett is riding better than his results indicate. He is better than seventh place and if he can put another main event together without a mistake, we will see it.

HRC Honda can’t seem to buy a break. They lost points leader Ken Roczen to a big injury at A2 and then Cole Seely missed Seattle with a groin injury.

Roger DeCoster signs up to race the last three rounds of supercross.

After his Seattle guitar sesh went over so well, Justin Hill leads a Mormon sermon in Salt Lake City with plans to ring the morning bell on Wall Street next week and wrap up the series by marrying Britney Spears in Las Vegas.

Cade Clason makes several attempts to not qualify for the main event.

Jason Anderson wins the heat at his home race.