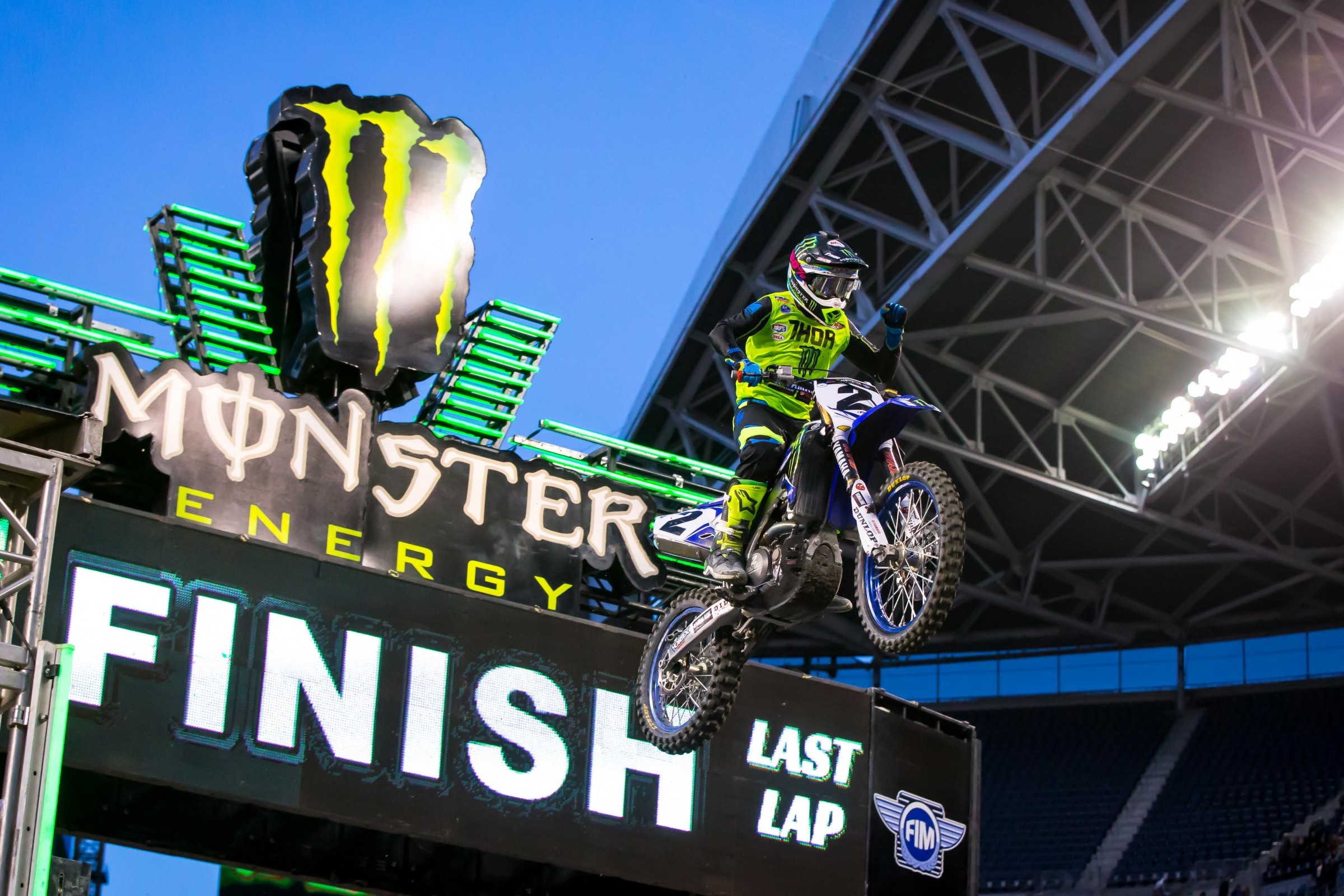 Two months ago, Monster Energy/Chaparral/Yamaha Financial Services Yamaha’s Cooper Webb was starting to get rolling in his rookie year, taking a podium in Oakland and showing improvement each week, until a heat race tangle with Dean Wilson put him down on the ground in Minneapolis. He missed some time healing a sore shoulder, and when he returned two races ago in Detroit, he wasn’t quite back to the level he was on before he was injured.

He was back to that level—and more—in Seattle. Webb nailed the fastest time in practice, won his heat race, and battled for a podium spot for most of the main event. A late crash while battling Jason Anderson for second sent him back to eighth, but it was still a big, big confidence boost for the young North Carolina native. He came to the post-race press conference to talk about it.

Racer X: What changed, dude? You’re like a whole new guy compared to the previous two weeks.
Cooper Webb: I’m not too sure. I think for me it was just kind of getting my feet wet again. The first two races I was off but I had some pretty just weird crashes and stuff like that in the main that put myself pretty far back. Obviously I felt like I’m a lot better than whatever results those were. Today I think it just kind of fit my riding style, and it being a technical track and everything like that I think it was kind of cool to honestly have the one practice. I feel like I can learn tracks pretty quickly, so that was kind of interesting and fun and just something different. All day I felt good. It was funny that I rode outdoors all week. I didn’t even touch a supercross track. So maybe that’s it. I think just the way the track was fit my style for sure.

It looked like you upped the aggression a little bit, too.
Yeah, it’s funny how it works. Like I said, maybe it’s the mentality. I think getting your ass kicked two weekends in a row definitely fires you up. As a racer I feel like that’s who I am. It’s frustrating when I’m not riding like that and not riding to my potential. So, like I said, I think tonight was definitely a huge step in the right direction and being up there battling with those guys. I felt like my normal self, so it was pretty fun.

You have any big moments out there? Watching everybody it looked like everybody had at least one out there.
Yeah, I had a few. Obviously the crash was pretty unfortunate. But definitely, it was gnarly. Everybody was struggling and it was a survival almost. With us in that group we were pushing. I think for me I kind of started taking some bad lines and made some mistakes and was missing rhythms. Unfortunately, like I said, that crash really kind of screwed the result up, but that was definitely the big moment.

How do you feel compared to the beginning of the year?
I feel much better. I think things were going the way tonight was until I got hurt, and I think I was right there until that happened. Really I think my shoulder is just now back to 100 percent. I think I came back not necessarily too early, but I wasn’t 100 percent. So as a racer I just wanted to be out there and ride. So I think now it’s a combination of everything—confidence is back. I think I’ve got the jitters out of the way. It just so happened to be a really technical track and that really excited me. It’s nice when you get out to the practice and you feel like yourself and on the board again and up top. I think at least for me it gave me a lot of confidence right off the bat. I feel like that’s all I need, is a little taste of confidence. It’s nice to have a night like tonight, even though the end result wasn’t awesome.

Going into the main did you have a feeling like, we can do this? Are you at that point where you can think about winning races yet?
Yeah, I thought I was going to win. I knew with the holeshot I could win. I feel like Eli [Tomac] was probably the only guy better than me tonight truthfully. I think Marv  [Marvin Musquin] got a good start and he was going to be hard to beat, but I think Eli with those rhythms was quite a bit faster. So I think that definitely helped. That’s the first time I’ve felt that I can actually win a race. So that’s a nice feeling. We’ll go into the break and keep that mentality going, and keep it going for outdoors.

That’s the second time you’ve done this. You battled with Eli in Oakland and you were like, “I’m going to bust out this quad and repass him.” And then here he gets you and you’re like, “All right, I’m going inside.” It seems like you can get motivated in the battle and actually up your game, which most guys don’t do.
It’s cool to be able to do that. He’s obviously on fire. So one, to be able to race with him is a confidence builder, and to be able to actually pass him. I don’t think too many people have done that this year. That’s something cool. I think for me, I’m just a racer. I want to be battling. I don’t want to get passed, and if I do get passed I’m going to try to get it right back. I think that was the motivation behind it for sure.