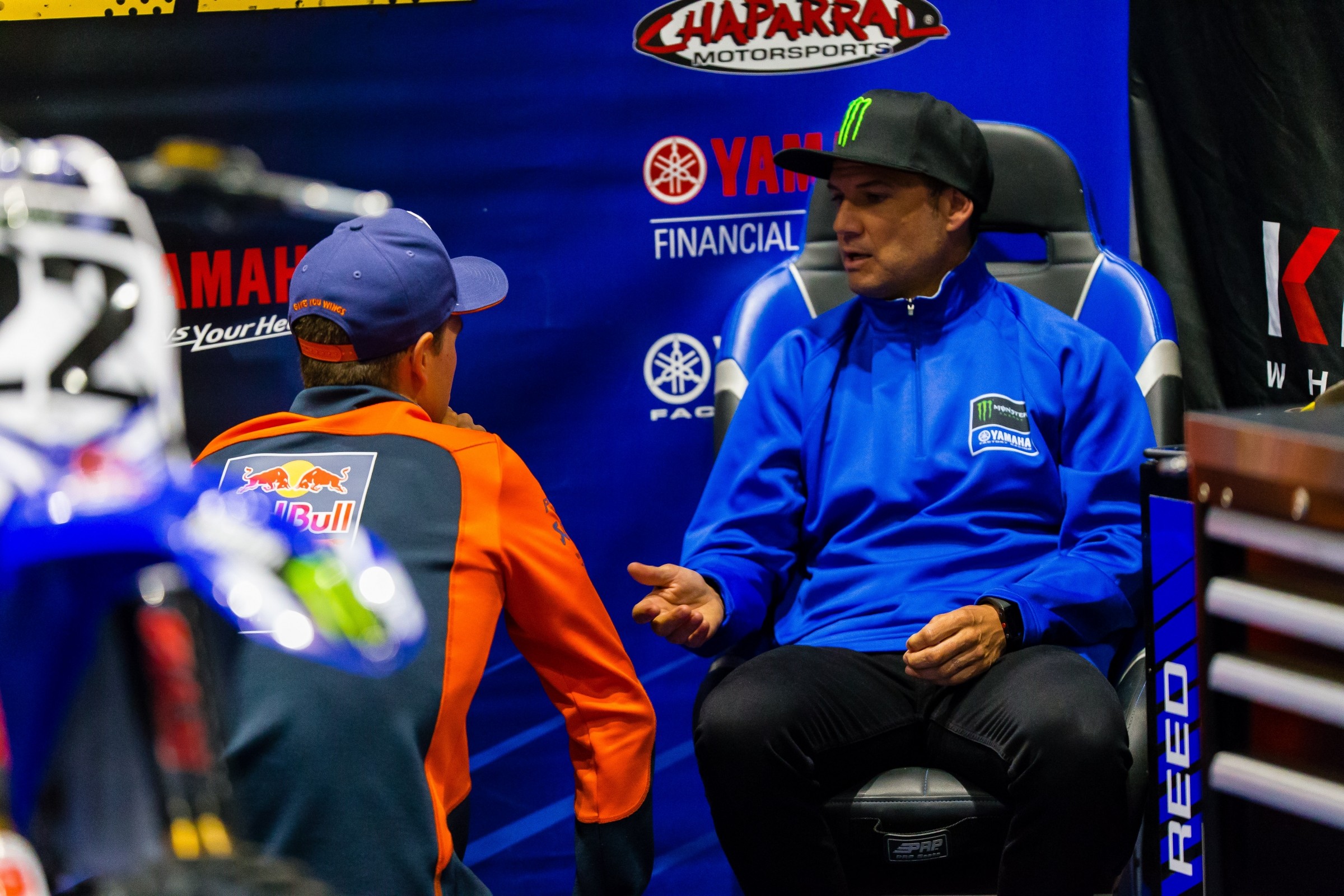 Chad Reed isn’t afraid to speak his mind, so even after a disappointing result of ninth place in Seattle, he came to the post-race press conference to explain his side of last week’s lapped rider situation—and the $5,000 and five points penalty handed down by the AMA.

Racer X: How about a quick rundown on tonight?
Chad Reed: Tonight, it was tough, but I enjoyed it, to be honest. I like those conditions. Main event was good, to be honest. Not a great start. I didn’t see exactly what happened, but the crash in the first turn started pretty early. I rolled out of the gas and tried to avoid that. I want to say that, of all the times that I’ve been here, that’s maybe the second time I’ve made it through the first turn not on the ground. So when I seen those guys crash I’m like, “Not again.” I thought I was going to get tangled up. Then obviously you guys listened to Eli [Tomac], and I had all the same plans. I was lining up that triple onto the table all day long. Pretty much gave up second in my semi just to feel it out. Pulled the trigger same time he did. I was bumming. Like, damn it, he did it at the same time I did! So actually the plan was to latch onto him [Tomac]. As soon as we started doing that, we started blowing by some guys pretty quickly. I was making good progress and then unfortunately maybe four laps in or something like that I got a rock in the rear brake on that section. Luckily the mechanics’ area was right there, so then I kind of had to roll all the way through that section and then I pulled into the mechanics’ area and try to dig the rock out and release the rear brake and go back out. I don’t know where I came back out, but I was obviously not where I was. And then yeah, I had some good laps. But I enjoyed the race, to be honest. I think way too much track maintenance. I just think that maybe they need to do the triple and the finish and that’s it. The race is too fast at the beginning. The skill level, everyone’s just pinning it, and then suddenly the track changes quickly and then it’s like everyone’s going everywhere. Then it’s really difficult. Kind of like what Eli said. It was really fast going in the back of the guys and then suddenly you start getting messed up in their rhythm. But I had fun tonight. It was good.

Is that the old school in you? I did see that butt patch today. Having a little gnarlier track?
It was fun. I’ve been here quite a few times and I’ve never rode it rocky like that. That was probably something that I haven’t done. So good guess would tell me that dirt was pretty cheap or free. Other than the rocks, it was enjoyable. It was like you had to think about it. We had to make big changes to the bike. I think that we’ve made a lot of progress in some certain areas and then you come here and the dirt pulls the bike down. So we kind of had to undo a lot of what we’ve been working on and the direction we’ve been going. I think that going to the semi tonight actually helped me a lot to readjust and get back up to speed.

I heard you mention earlier that you’re not satisfied with the year so far.
It’s been pathetic. It’s just been one of the most frustrating … actually I think the most frustrating ever. When you look at the big picture, it was a great off-season for me. I honestly entered Anaheim thinking that I had a shot and believing that I had shot at winning races and being on the podium week after week. It’s been everything but that. I don’t know. You kind of want the current run to end and you want that breakthrough ride. It’s been a lot of Sundays and Mondays that haven’t been that fun. Kind of know what the problem is, but you just keep your head down and keep trying to truck away.

A lot of the chatter was about the penalty and what happened last weekend. Can you comment on that?
I think for me the penalty, I don’t accept it. I don’t know that this is the end of it. I feel like at some point somebody has to make a stance. There’s an individual [FIM Race Director John Gallagher] that’s made calls that in my opinion are always aimed at me. Like the black flag [from Anaheim in 2015, it is] 100 percent unsustainable. Never is going to happen again. He called it [the Anaheim black flag] malicious. He called it retaliation. Why did Zach Osborne not get DQ’d from Indy [when he hit Adam Cianciarulo in practice]? Correct me if I’m wrong, but that’s 100 percent retaliation. Nothing happened. I have 200 plus main events and of those 200 plus main events I’ve been involved good and bad with lappers. Sometimes they work with you, sometimes they work against you. Our sport has seen decades and decades of comments from commentators or riders or all of the above about them impeding your progress. The lap times don’t lie. He [Ryan Dungey] did 53s the whole time he was behind me and then dropped into the 54, 55s after he got past me, when he was behind the [Davi] Millsaps/[Justin] Barcia battle. So on paper he lost more time from them, but they didn’t receive fines. When a race director calls me and the opening conversation is : “I’m sure you’ve seen Vital MX and I’m sure you’ve been on social media,” it’s unacceptable. I don’t go on Vital MX, sorry. I haven’t been on my social media since Phoenix. It’s just not acceptable. I don’t accept it. I think it’s time that someone takes a stance and makes it right.

Why the change on social media for you? You were that guy for a while.
I enjoyed it, and maybe one day I’ll get back on there, but I just found myself looking at my phone all the time. I have fun, cool friends to hang out with. I go to the track and I feel like I’m doing my motos and I’m sitting there. You’ve got Mookie [Malcolm Stewart] or Chiz [Kyle Chisholm] and it seems like we’re all just looking at our phones like we have a lot of hours to kill in a day. I just don’t give a shit what people have to say or whatever. I get it if it’s positive and whatever, but for me I needed to desensitize myself.

Cut the cord?
Yeah, do a little bit of a detox. Like I said, I think it has its place, and I had a lot of fun with it. I would like to go back, but just for me I wanted to take a step away and lose the addiction, to be honest.

Those laps there, with the blue flag, what were you doing at that point? Did you see them? Did you not even know they were there, the flags?
Obviously I seen them. The initiation of it, I seen it and I looked. I looked to my left and then Carlos [Rivera, Dungey’s mechanic] was going crazy and pretty much trying to hit me with the pit board. For me, I took a look and he wasn’t to my left. I was just thinking he was just right on me. When I basically figured it out, and then I looked to my right, and he wasn’t on me. He was four or five bike lengths back. I kind of just put my head [down] and continued to try to make progress in my own personal race. In particular it was a very one-lined race track. It wasn’t like you could move off the race line and not give up a whole lot of time. So it wasn’t a friendly track to be a lapper. Very, very few times I’ve been a lapper and I never want to be there. I think the bigger picture is I was pissed off that I was back there, and this week I focused on never being back there again. I don’t have a problem with Ryan. I really don’t. There’s no issue with Ryan and I. We talked today and the conversation was the extent of the buildup of the frustration. But the frustration that I have with him, and even in our conversation, it was kind of mutually agreed that I wasn’t trying to jack him. I never swerved. I never tried to pass him back. I just think it got massively blown out of proportion. We had a little beef going. I just think that his world was closing in on him, and for me I never took any of that personal, because I’ve been there. I was here in Seattle in 2008 and I had crashed in Detroit a few weeks earlier. Kevin [Windham] was on a little bit of a roll and started to eat away at my points lead. Shorty [Andrew Short] was on a Honda. I remember making comments similar to what Ryan said about me this week. So it’s like, you’ve been around and you’ve seen it all. I’ve made comments that I don’t agree with today or if you could take them back or say them differently you would. That’s really it. That was the extent of our conversation. He apologized for a few things, and that’s it. I honestly didn’t do anything to jack his race other than to just continue to race forward and do my own race.

If the roles had been reversed, would your feeling be different or not? If you had been racing up front and it’s championship time?
If you reversed the role 100 percent and the way it’s rolling out and the way it’s happening, I think I would probably make the same comments that he did. I’ve been there. Two thousand and nine, you have a 30-plus point lead and an individual [James Stewart] is going on a roll, winning a lot of races. You’re seemingly making a lot of mistakes and you feel like you’re on the back foot and you’re seemingly giving it away more than they’re taking it. So I understand. I’ve been there and been in that exact position. Like I said, I don’t have beef with him. I’m not mad at him. I completely understand it. I think our conversation today made it clear to me what I believed and what I thought to be true.