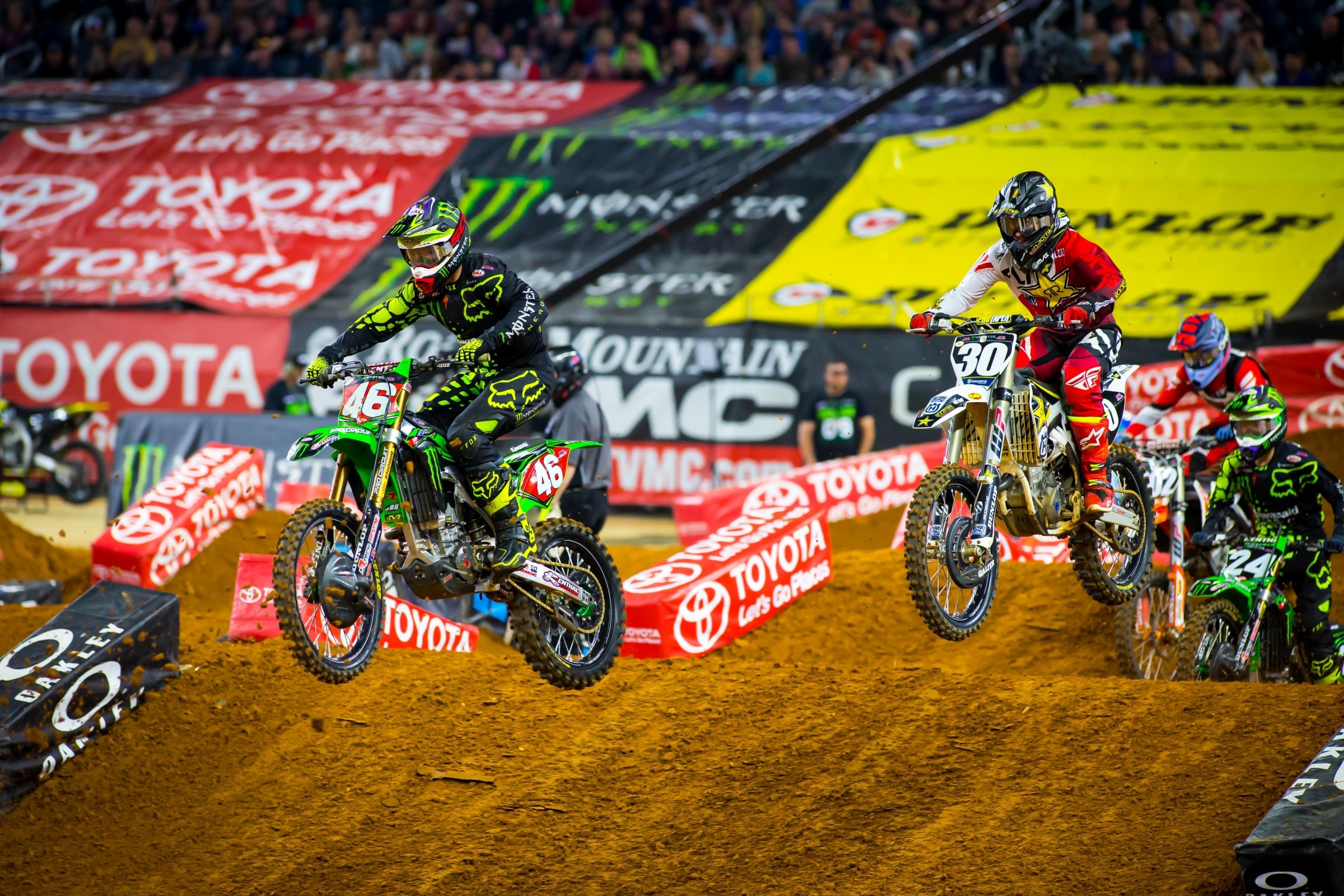 3 on 3 Questions for Seattle

1.) What do you think about the Dungey and Reed situation?

Steve Matthes: I already wrote about it. Stop!

Jason Thomas: I already wrote about it also.

2.) Big points lead for Justin Hill out west. Still a chance for drama?

Matthes: Well, with the weather looking grim, there's definitely a chance for something crazy to happen in the soft dirt of Seattle. Hill was the guy when we last left (although remember Shane McElrath's bike took a dump while leading the last main event) and I expect that to continue, but really it's kind of like the start of a new series with the guys having so much time off. I'm sure some of them rode some motocross and tested while others stayed on supercross. Either way, I like Hill's chances to bring this home.

JT: Well, we know in 250 racing that anything is possible. I do like Hill this weekend, though. It's his hometown supercross race and he is no stranger to inclement weather. He's in a great position as well, meaning he won't have to take huge chances if things aren't perfect. He can take things as they come. If a win is there, take it. If not, get good points and keep it moving toward Vegas.

Weigandt: Absolutely. The 250 class is always crazy and McElrath's weird bike problem just shows how crazy it can get. Under normal circumstances I'd say Hill's big points lead and win streak means this title is his, but nothing is ever normal in 250SX.

3.) Was Marvin Musquin sandbagging for Ryan Dungey on Saturday night?

Matthes: I don't get this notion. We just saw Dungey ride the best he has in a month and yes, Marv has caught and passed Dungey a few times this year, but you know what? Dungey has beaten Marv nine out of 13 races this year. With the score being 9-4 for Dungey in results and having established that Dungey rode very well in catching Eli Tomac for the first time in two months and Marv having a bad crash in practice, can we just give Ryan some credit here for a great ride?

JT: I'm still too torn on this one to be 100 percent sure. I have a sneaking suspicion that KTM would love Marv to be a part of the solution instead of part of the problem. So, having said that, to think Marv wouldn't lay up for his friend, riding partner, and teammate, would be a bit naive.

In the heat race, I definitely think Marv made things easier than they could have been. He waited on Ryan on more than one occasion. He hasn't waited often this year (refer to his heat race pass on Davi Millsaps in Indy for evidence of this).

In the main event, however, I think Dungey picked his pace up to where Marv wasn't an issue. If Marv was laying up, he would have followed Ryan up to Eli, hoping to also pass the #3 if possible. He was much further back and out of the battle, which was tell tale sign that Ryan just had more in that main event than Marv did.

Weigandt: We're really at the point where any time Dunge beats Marv we just have to assume Marvin let it happen? As Matthes said, Dungey has beaten Marvin more times than Marvin has beaten him. Yes, it's a huge deal when Marvin catches and passes Ryan, so maybe it seems like it happens a lot, but it has actually only happened twice, so it's not like he's been owning Ryan. In St. Louis, Marvin was hurting a bit from a big practice crash while Dunge was going fast enough to catch Tomac for a few laps. Marvin was supposed to be even faster than that?

As an aside, I want to share one of the funniest moments of the weekend: When Marvin crashed in practice, the Kawasaki guys told me "We need him out there!" Yep, he's actually been an ally of Tomac's points chase a few times. I could see Marv helping his teammate at some point, but I think we just saw racing in St. Louis.