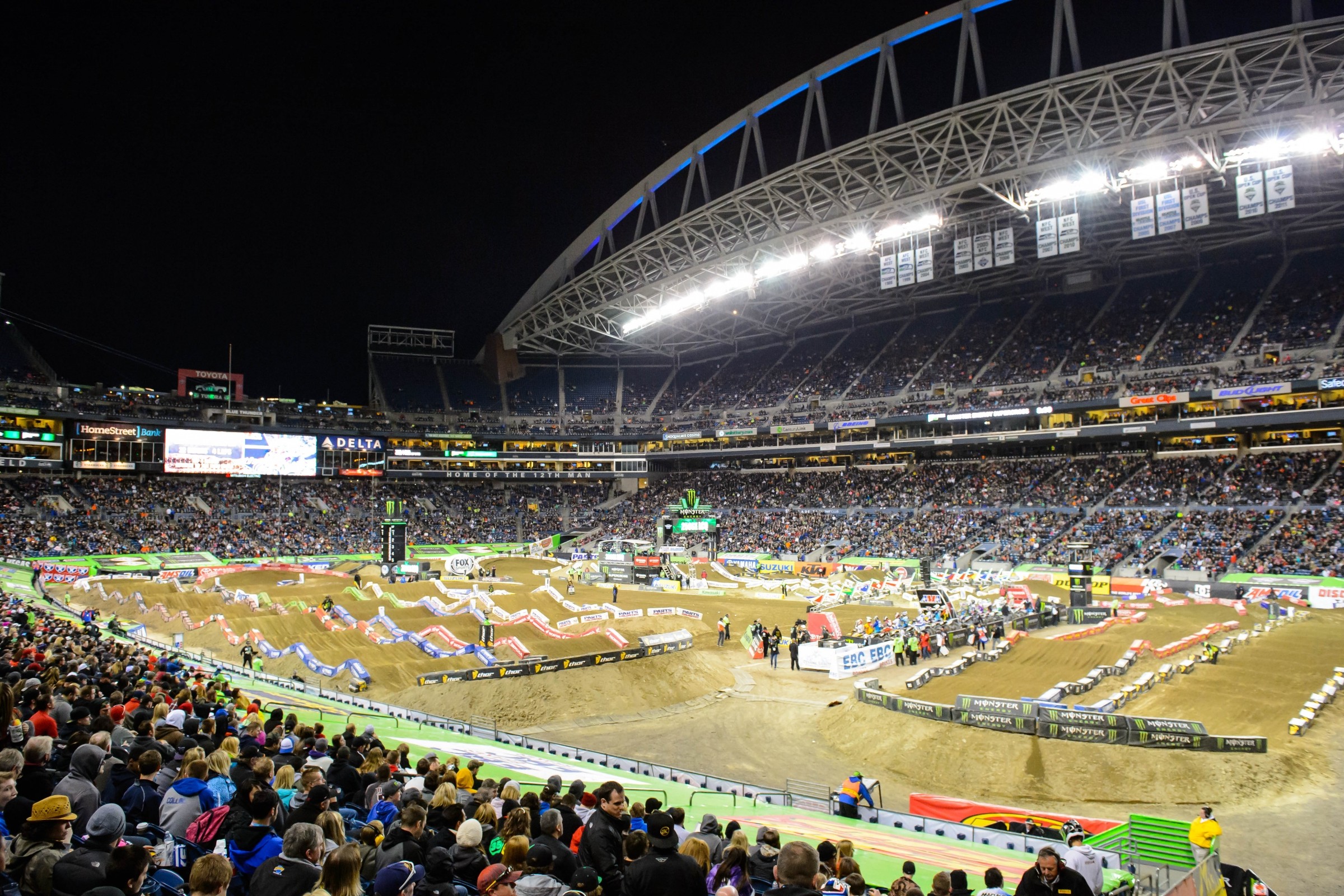 Roll on, Seattle! After a wild weekend in St. Louis, we are moving west to the beautiful Pacific Northwest. This race holds a special place in my heart and I genuinely enjoy this city. There is a coastal feel to the downtown area and no trip to Seattle is complete without a tour of the Pike Place Market. Downtown Seattle is worth the flight in itself.

The Seattle weather was always tough in my racing days and looks to pose more danger for the 2017 edition, too. Just how nasty the weather gets will be the question as more often than not, it only mists and doesn’t do much damage. If it truly does rain, though, it can be really nasty inside Century Link Field. The 2006 AMA Supercross Championship  was impacted by nasty weather in Seattle and if the skies open up, 2017 could be the same.

How the track plays out will depend on the weather, but the dirt here is soft and rutty even when it’s dry. Rains leading up to Saturday will ensure a tricky surface. That means that rhythm sections will be tougher to string together and the easiest option becomes the most likely. Looking at the track map, Dirt Wurx definitely didn’t hold back because of the conditions. There are jumps and whoops galore.

The start is the short variation with a left hand 90-degree first turn. This usually ends in first turn crashes but with the plentiful traction, riders should be able to slow down and turn within the track’s confines. The first rhythm is built to be tripled but as I said earlier, the soft dirt will make that tougher than normal. Look for most riders to double all the way through if the dirt is as soft as I expect. The next 90-degree left leads into several interesting single jumps. There looks to be some elevation change throughout the rhythm so keep an eye on how that plays out. The next 180 leads into a standard supercross triple, which could prove difficult for the 250 class. Ruts and soft dirt equal trouble for the small bore riders. A tight 90 follows, transitioning into yet more single jumps. Of course the goal will be to triple these somehow and I expect the 450s to accomplish this, but it won’t be easy. The track crosses over the start straight twice before entering the first of two whoop sections. Whoops in Seattle are usually small and rutty. Keeping the front wheel light, utilizing great balance, and maintaining momentum are key to speed in these. After the second set of whoops, there is a tight 180 before the finish line. There is another triple jump finish but as we saw last week, they will probably opt for a more traditional ending to each lap. After the finish, there is a 180 leading into a big combination. In theory, riders would triple out of the turn, then step onto each tabletop until stepping over the final single jump. I believe that will simply prove too difficult to execute with the conditions, though. The mechanics’ area is next, just before the always popular sand section (insert sarcasm). That’s a lap in Seattle and while it sounds simple, putting together consistent laps at this event is incredibly challenging.

Will Seattle’s weather play a determining factor in this title?

Can Justin Hill maintain the momentum he had leaving Dallas?

Will the KTM/Husqvarna riders be a factor in the Eli Tomac/Ryan Dungey saga?

How does Chad Reed respond after a week to think about the St. Louis main event?

Eli Tomac owns a house in this category.

Justin Hill hasn’t raced in 2 months, but he was simply blazing before we went east.

Alex Ray was quite hot after being clobbered by Justin Barcia.

Josh Grant has quietly been progressing as of late.

Chad Reed had a rough weekend and this week hasn’t been much better with monetary and points penalties.

Cooper Webb’s return hasn’t gone to plan after bruising his shoulder in Minneapolis.

Dungey hasn’t had things go his way as of late and now finds himself only four points ahead of a surging Tomac.

Hill wins in front of his close-to-hometown fans.

Tomac is surrounded by a sea of orange and white when lining up for the main event.