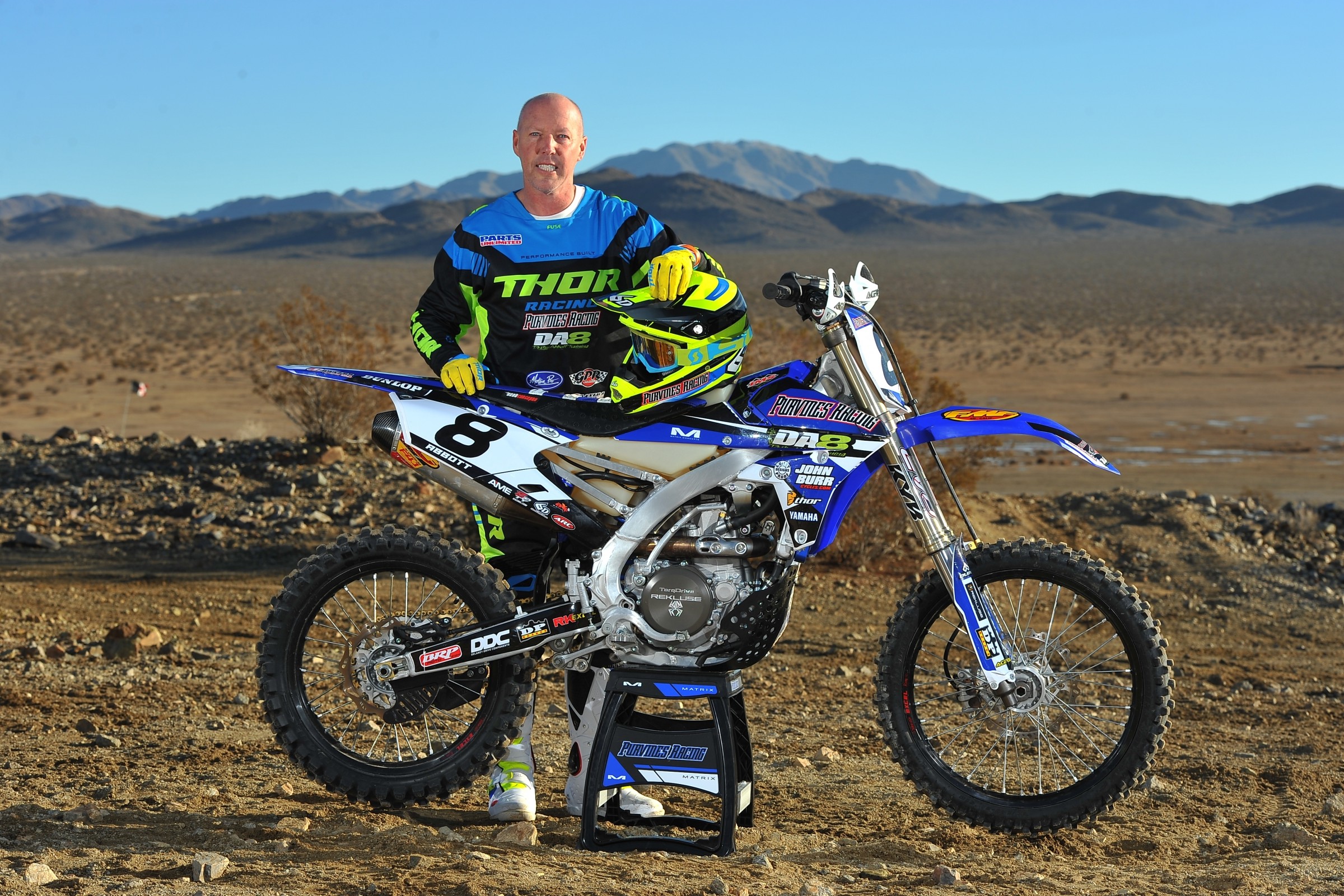 Where Are Destry Abbott

He is one of the most decorated and versatile dirt bike racers in America, but in May 2016, despite having the strength and body of a professional athlete, Destry Abbott was diagnosed with Leukemia. Leukemia is the cancer of blood-forming tissues, and it can be a very challenging disease to treat.

The news of his diagnoses spread quickly throughout the industry via social media, and Destry was soon entered into a race for his own life. Quickly, Abbott’s friends, sponsors, and competitors rallied around him—raising money and helping out in any way they could.

Ten months after his diagnoses, Destry has beaten the disease, and was recently declared “in remission.” In cancer terms, remission means the disease has left your body. You are not cured, but there are no signs of it, and the more time that passes in remission, the better. However, and in a very cruel twist of irony, during Destry’s treatment his wife Charlotte was diagnosed with breast cancer.

We caught up with Destry as he was leaving his Arizona based DA8 Training Facility and heading home to help his wife, who is in the middle of a grueling chemotherapy cycle.

Racer X: The news of your diagnosis was fairly well publicized in the motorcycle press, and social media. But that was nearly a year ago. How are you doing?
Destry Abbot: I’m doing well. I’m working on building my strength back. I am in remission now; I’m able to ride again, which is great. We are now on the Yamaha and just having a blast. But I am probably 60 percent of what I used to be. Every week is a huge progression. Chemo isn’t fun to go through, but it’s what I had to do. I will probably have a lot of side effects down the road, but it’s keeping me around now, and that is what is important.

However, my wife just started her first treatments for breast cancer, so I’ve been focused on her right now. She has been fighting her fight, as she got the news back in September of 2016. I got my news in May.

Roll reversal!!! I don't like asking for much but please keep my wife in your thoughts and prayers. I know @charlotteabbott8 is really nervous about her first major surgery today (1 of 3 surgeries). We'll be here for a couple days and then she'll be starting radiation for 6-weeks and chemo again. She's amazing and I know we're going to get through all of this. Thank you for always thinking of us. #da8strong #familyfirst #fcancer #endcancer #breastcancer #positivevibes

Wow. I don’t even know what to say to that. Getting those two diagnoses in the span of four months.
It was rough. We were in Houston for my treatment, she was taking care of me, and one day she felt a lump. We were both blown away to get the news after getting it checked out. But she’s been strong, and dealing with it. She just did the whole bilateral program, got the tubes and all. So I’m doing whatever I can to help her now. She was awesome and by my side for 10 months, so now it’s my time to be by her side.

Where do things stand with your disease?
Well, December was my last treatment in Texas. I went to Houston and did the last one. On average, I would stay for seven days or so, but then it started getting less often as the treatment went on. Now it’s just monthly for 15 minutes or so. My first treatment was really hard; I was there for 20 days, so doing the 15 minutes thing is nothing. It will soon come to just taking a chemo pill here at night, and then that’s it. But it honestly has been the hardest 10 months of my life. I was white as a ghost and lost 45 pounds, and it just ruined me.

You live in Arizona, but got treatment in Texas?
Yes. I went to MD Anderson in Houston. They’re one of the best in the country; it wasn’t easy to get accepted. I started at a place in Phoenix, but didn’t like what I saw. I then went to another place in Arizona, but I still felt there was better care. So with the help of some friends, I got into MD Anderson. And as of right now, I don’t need a bone marrow transplant, which was really good, and a function of the quality of treatment. Leukemia is really hard to go through. Before I knew what I had, I was so weak and hurting, but I didn’t think it would ever be cancer.

It seems like you had some good support from the world of motorcycle racing?
I was blown away with how the industry came together. So many people came together, did fundraisers and whatnot. It was amazing. Flying back to Texas every month was really hard, but it kept me alive. I have a few people who really stepped up, including Steve Fox, Johnny Ringo, and Dan Cogdell. Steve is in the El Paso area, and he got me into the hospital. Dan lives in Houston, he was a huge supporter during everything and Ringo is an old racer who was our medical insurance guy and helped me navigate that process.

Tell me about the insurance process. It can certainly be hard for those who are self-employed and/or professional athletes.
Well, I quickly learned that while I had good basic insurance for me and my family, it wasn’t good enough for something like this. So I had to get new insurance, which, given that I was sick already wasn’t easy. But we got it, and it was really good. My previous coverage limited me where I could go; I knew that wasn’t a good thing for my cancer, as it was all about protocol. So I had a friend who was treated at MD Anderson, and I knew that was the place to go. We had to buy new coverage, and we stayed back until we figured out. The disease was 90 percent throughout my body and we had to be super aggressive with treatment, but we also had to get our affairs in order first.

Lets talk about your family. You and Charlotte have three kids, right?
Yes. We have two daughters and my son. My daughter Chelsea worked at KTM doing marketing work, but when I got sick she left and come home to help out. My other daughter is Kelsey and my son Cooper, well, he’s a racer. He raced for Husky for the past few years in the pro class, and just recently moved to Yamahas. He’s been maturing really quick. He rides for our team, which is Purvines/DA8 racing.

Tell me about your DA8 Training program?
Well, I offer all forms of training. Be it online, in the gym, and even doing riding schools. Although the riding schools are on hold for right now, as I’m a little overwhelmed with everything that has been going on, health wise. I just don’t have the time to do the schools right now. Taking care of my wife is the number one concern, but I hope to get back to that at some point. The gym is going strong, we own it, and it’s in a 5,000 square foot building. We could use a bigger one, but we have a great group of regulars, including several professional athletes as well as some regular every day people. It is just a normal gym, and we have members who work out there that know nothing about bikes. For me, it is really neat seeing people get results with the work. It doesn’t matter if they are an athlete or just a regular guy who wants to get in shape.

Lets talk a little about your career. What are some of your proudest accomplishments?
I think without question, my biggest accomplishment would be winning seven ISDE gold medals and representing Team USA. Spending time as a professional athlete to represent the country, it is a huge honor, certainly the best that you can ask for. I also won 10 major Hare and Hound titles as well as several Best In The Desert championships. Last year I was going to do a full year of racing, but that got put aside with my sickness. So coming back now, I’m turning 45, I feel good and am just having fun riding again. But you know, I raced pro for 27 years, and towards the end, I had been racing pro for longer than some of the kids had been alive, kind of like Mike Brown. I just love the sport, but as you get older, the mind and body don’t always click, you have your good days and bad days. I think that is some of what is going on with Chad Reed. When you’re good, you’re really good, but it gets harder to keep that pace week in and week out.

Your son Cooper, he seems like he is making a go of being a professional racer?
He is! He picked it up later than most of the kids. He has made mains in EnduroCross, and seventh was his best finish. That is actually pretty good when you consider he has only been racing for four years, and is up against guys like Colton [Haaker] and Cody Webb. Those guys are no joke. He didn’t get into racing until high school, so he is a late starter for sure. But he’s doing really well. He’s liking the new bikes and the Yamahas are really good. He knows what it takes to be successful, and he just has to keep putting in the work and getting better.

You were always a Kawasaki guy, how did the Yamaha thing happen?
Yeah, I was with Kawi for 20 years. They were great to ride for, and they are great people. But for me, switching to Yamaha was a good change, but something I didn’t see happening. I was really happy where I was at Kawi. But they wanted to go in a different direction, which I understand. But it was tough for me and I was a little bummed, as I had wanted to finish my career with them. For them, it was a business decision and I’m okay with it. So, our program for 2017 is with Ron Purvines, he went and bought all the teams bikes. He is passionate about racing and he stepped up. We have six pro riders, including Gary Sutherland, who we hired from KTM. Our main sponsors include Thor, FMF, Sidi, and 6D Helmets, but there are a ton of others who have helped out.

What is your plan for the 2017 season?
Well, we will be at all the WORCS races, all the EnduroCross events, and select Hare and Hounds and the Big 6 races. For me, I need to get in better shape, but I hope to probably return to racing in a month or two.

Thanks for chatting Destry, and best of luck to you and your wife.
Thank you. My biggest thing right now is thanking people; I was overwhelmed at the support that came out and from people who I didn’t even know. I wasn’t able to get back to everyone, but my wife Charlotte and I thank everyone, it’s nice to have people supporting us during this hard time. We are part of an amazing sport.