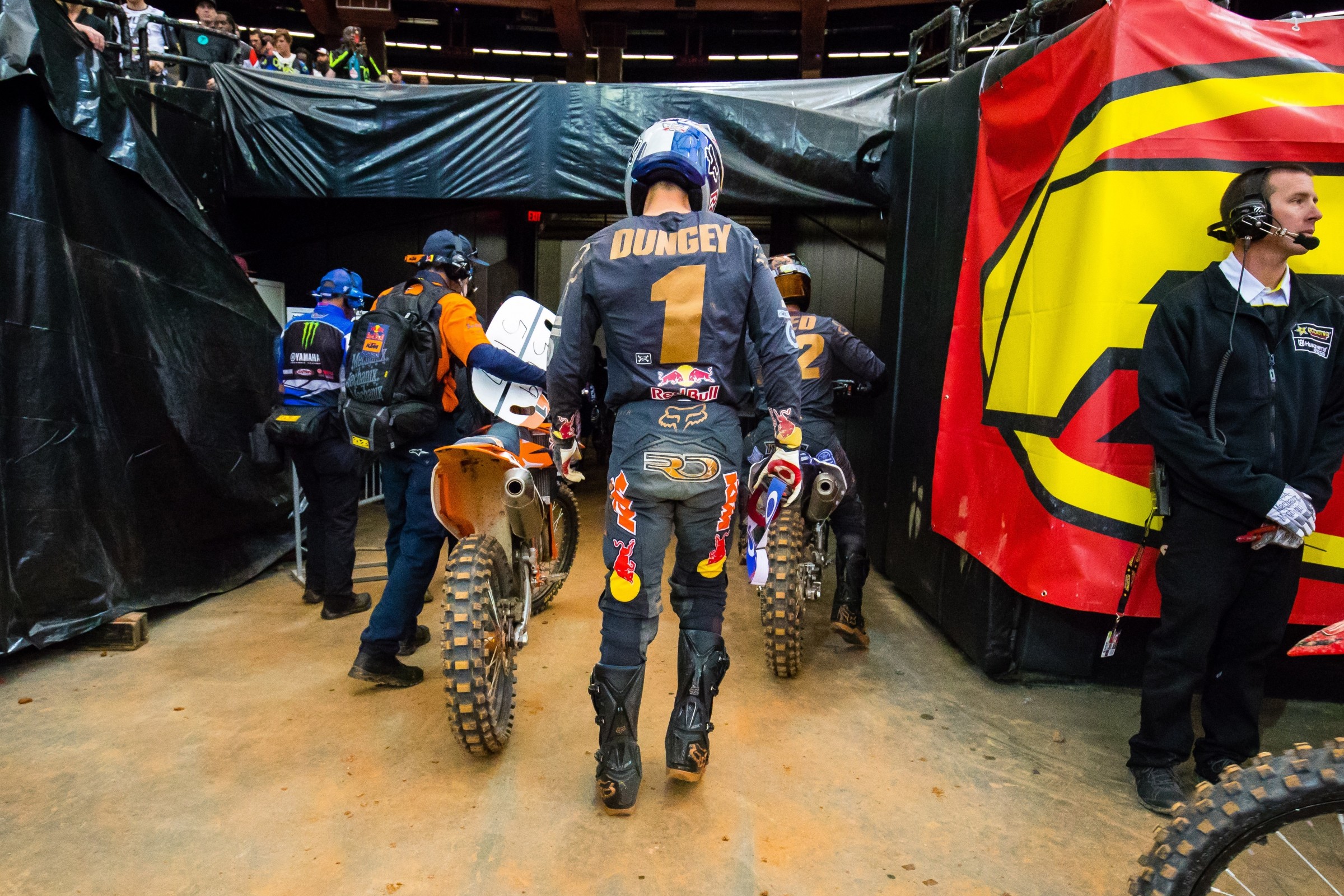 Breakdown No Room to Breathe

We have reached the halfway point in Monster Energy Supercross. We’ve had big crashes, lost a superstar for the season, and watched riders go through the a roller coaster of a points race. As these racers move from week to week, they will often compartmentalize the season so they can assess their own strengths and weaknesses. Many of the issues that riders dealt with in Atlanta might be different than what they faced in Anaheim. Bike changes, fatigue and sickness from travel, nagging injuries, and a general change of strategy are all points of emphasis. It’s tough to improve unless you know where improvement is needed. This continual self-analysis by the teams and riders can pinpoint what to work on so helpful changes can be implemented. In the spirit of that, let’s take a look at how I see a few key riders’ first half.

Ryan has shown why he has three supercross championships and is leading a fourth. He hasn’t had the outright speed that I saw last season, but his overall game is polished to perfection. He seems to always put himself in the right spot and when others open the door of opportunity, he is there waiting. I do think he was a bit more dominant last season and had a speed edge over the 2017 edition of himself, but he is still Ryan Dungey. He always takes what the track is giving him and doesn’t make the big mistake. His experience and race IQ have given him a 25-point lead at the halfway mark so regardless of how you feel about his season thus far, the bottom line is very telling. He has found a way to eek out points even when things aren’t perfect. As Ricky Carmichael used to say “championships are won on your bad nights.”

This year has been a huge step forward for Marvin. He came into the season as another name in a long list of hopefuls. He has separated himself and at the halfway point, sits second in points. Yes, he is a full race worth of points behind Ryan Dungey, but that’s not a telling story of how he’s been riding. His biggest problem has been with inconsistency. With two ninth place finishes at Glendale and Oakland, he handed a lot of valuable points over to Dungey. He was able to grab seven back in Dallas and another two in Minneapolis, closing the gap and adding pressure to the points leader. Heading into Atlanta last Saturday, Marvin had to be optimistic about shrinking the gap even more. After all, Atlanta was his standout race last season and saw him nearly win his first main event ever. He had every reason to think it would be a positive weekend. That is, until the gate dropped. Marvin found himself buried on the opening lap and even worse, Dungey jumped out to the lead. He would only manage a fifth place finish and with Dungey winning, he would hand back those nine precious points he gained in the previous two weekends. One step forward and two steps back for anyone trying to beat Dungey, eh? For Marvin, though, he has made huge progress this year. He is firmly amongst the elite and a legit title contender now. We are only halfway through and anything is still possible, but this has undoubtedly been a great second season in his 450 career.

Had it not been for a very rough opening to the series, Eli would be right in the thick of this championship. He still has a chance to climb back in it, of course, but going 5-6-8 at the first three races really put him in a hole. He caught fire at the next two rounds, winning Glendale and Oakland in dominant fashion. He had knocked the points down to a 17-point deficit with 11 rounds to go. Things were looking up! Then, he ran into Texas sized problems in Dallas, losing 12 points to Dungey and 19 points to Musquin. All of those points, and arguably more important, the momentum, he’d gained was handed right back to the Red Bull KTM team. Even with his up and down results, I will still point to him as the fastest active rider. If he gets near the front early, I can’t see anyone beating him. Unfortunately, that’s been his bugaboo as well. His average starting position is over six, which when accounting for his great start at Glendale, means he’s had some really bad opening laps. That situation has allowed others to capitalize and put him 27 points behind Ryan Dungey. He has shown the outright speed to be the champ, but the devil is in the details.

Cole was a question mark for me coming into 2017. Some had him as a shoe-in to win races, while others wondered how he would work in the shadow of Ken Roczen. With Kenny’s injury, the full scope of HRC falls onto Cole for race results. He has ridden well, too. While he’s had his share of missed opportunities the last two weekends, he rode incredibly well in Dallas to put his Honda on the podium. Had he not tipped over in the two weekends since, he could very easily have been on a three-race podium streak. Atlanta marked the second time all season that he missed a top five and both of those were solid sixth place finishes. He hasn’t won yet, which is always the goal for riders on Cole’s level, but he’s been fast and consistent all season. Better yet, his riding is trending to the positive side so don’t be surprised to see the stars align and Seely steal a win as the season unfolds.

JA21 has been all over the map this season. His starts have been the biggest issue, putting him in bad spots and forcing aggression. His disqualification at Anaheim 2 was brutal to his points landscape, as he was fourth in points going into the day and with Roczen’s departure, would have moved into third. As it sits now, he is fifth but within relative striking distance of Seely in fourth. His 10th place finish in Glendale was the outlier as he was recovering from his crash in the aforementioned Anaheim incident. The riding is good, the fitness is good, but the starts are really upsetting the apple cart. I still think he will jump out to a holeshot and win one of these before all is said and done. He is one of the riders who has elite level speed when things click.

CR is a wild card in this line-up. The winningest active rider in the sport, Chad seems to have a wide range of how he will stack up on a week-to-week basis. On his good weekends, he is in the running to win races. He beat Ryan Dungey straight up in Glendale. On other weekends, he’s unable to move into the top five. Coupling that with DNFs at Anaheim and Arlington and a rough go in Minneapolis, he’s left a boatload of points on the table. This past weekend in Atlanta, he looked ready for a great weekend but a crash early in the main event left him fighting to salvage a seventh place finish. It just hasn’t come together often for the #22 but as long as he stays positive, he will have some highlights ahead. He has that ability to turn his pace up to match anyone on a given night and as we all have been reminded time and time again, never count out Chad Reed.

In a nutshell, Ryan Dungey has taught a master class thus far on how to manage a series. He hasn’t always been the fastest guy, even this weekend in victory he posted the fourth fastest lap time. This isn’t the first time he’s faced adversity, though, as Ken Roczen came out swinging in 2015 and 2017 before subsiding. After two big weekends from his biggest rivals in Dallas and Minneapolis, surely he heard the whispers about being vulnerable this season.

How does he respond?

Coming out and winning Atlanta and pushing his points lead back to 25 points. That’s what makes Ryan so good and so tough to beat. He simply doesn’t give you any room to breathe. He reminds me of Ice Man from Top Gun. He races ice cold, no mistakes.

When Eli or Marvin blink, Ryan capitalizes with full force. Every advance has been countered, erasing any points gained. I have said all season that the only way to beat Dungey is to simply win races and beat him straight up. Ryan won’t hand any points to anyone. It has to be simply taken by force. Unfortunately for Marvin and Eli, there is nothing simple about that.