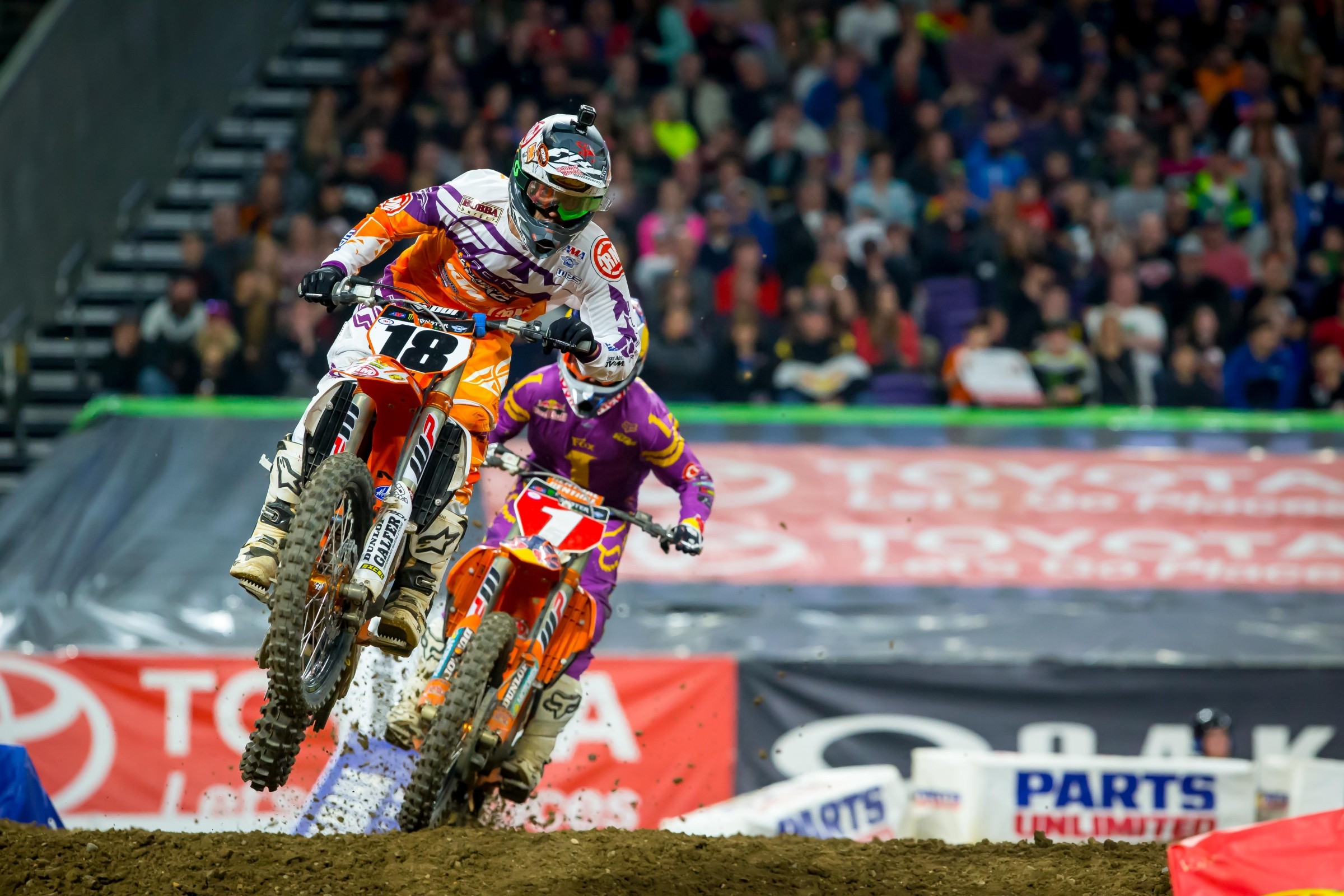 The track in Minneapolis was slower and tighter than anything we have seen this year. The layout was simple, with a lot of 90-degree turns and short sections, but the way the dirt developed with soft and hard spots created unexpected challenges for riders in both classes. How do the best supercross riders in the game navigate this type of track? Sixteen-year pro Jason Thomas breaks it down so us regular folk can understand.

Jason Anderson is shown here jumping a double out of a 90-degree right hand turn. This section was at the opposite end from the start, just after the standard supercross triple. The flat turn didn’t provide much in the way of a pivot point so riders flowed through the turn with speed. That speed pushed riders to the outside as the natural momentum always will. To combat that outward push, Jason is leaning hard to the inside. He’s probably headed a bit closer to the Tuff Blocks than he would prefer, indicated by his body contortion. Notice his inner thighs putting force on the bike, pushing and pulling it where he wants it to go. Most novice riders are completely at the mercy of their motorcycle once it leaves the ground. A pro like Jason knows he still has the ability to maneuver, even if slightly, once he is airborne. Avoiding bumps and hitting your ideal line are often direct results of this type of mid-air adjustment.

Justin Barcia is shown here in his return to supercross. This is just after the finish line jump. There was an on-off section that proved to be tricky once the track deteriorated. This is from timed qualifying as the sun is still shining into the glass roof. Justin is seat bouncing onto the tabletop through one of the many ruts. As this turn was a 90-degree left, there wasn’t anything on the inside to pivot on, just like the Anderson photo above. As his momentum is pushing him wide, he uses his inside leg as a rudder, keeping weight to the inside. That extra weight on the inside stabilizes him and also counter-balances his front wheel facing to the outside. With his momentum carrying to the outside and his leg bringing him back to the inside, the goal is to simply jump straight. He will land and then step off the tabletop over the next single to the inside. Without a berm to pivot off, all of this work has to be done to simply stay in the middle of the landing. Physics says he should land on the Yamaha Tuff Blocks out there but years of technique and experience keep Justin right where he wants to be.

Kyle Cunningham is airing out the triple on the back section on the track. He is pulling up hard on the handlebars here in hopes of making the downside. He may have made a small mistake in the turn or just wasn’t sure that he would make the landing. Ideally, he would tap the rear brake at some point and bring the front end back down.

Also, Kyle Peters just flipped over the bars in the whoops in the background. Adam Cianciarulo narrowly avoided his Suzuki and Jordon Smith is like, “Hey man, move it or lose it.”

It’s tough to do it much better than this. Marvin has just landed off of the double and has already shifted into full attack mode for the sand turn. The impressive part of this was that the preceding double was tough to downside and most riders landed on the flat area just past it. That flat landing resulted in a “bounce” for most riders before they could transition into the turn. That bounce is caused by the suspension rebounding back up before the rider can force it back down for the turn. For Marvin to be this committed so early in the turn, it means he either nailed the landing or discovered some sort of cornering voodoo.

His leg is raised up and out of the way, balancing his body weight and also at the ready in case he needs to steady himself. His head and body are leaned in the same angle of the motorcycle which may seem routine but if he was leaning more to the outside, the motorcycle would want to “stand up” and steer to the outside. He has his outside leg pressed on the frame and radiator shroud to grip the bike and further steer it in the direction he wants. His finger is also feeding the clutch to accelerate precisely to the amount the turn and dirt will allow.

Also, look at his eyes. They’re focused far down the track. Many amateurs make the mistake of looking right in front of them. Changing lines, avoiding downed riders, and simply being prepared for the next section are all made possible by your eyes giving your body time to react. Every nanosecond of extra time that you can provide from simply raising your eyes further forward is critical.

With the Musquin picture in mind, let’s take a look at Top Jimmy going through the same turn. Some riders chose to stand through this turn while others sat into it a la Marvin. Jimmy is contorting his body in order to keep his tires in the main line of the sand. His momentum is pushing him wide and his inside lean is fighting that push. The main difference I want to focus on is this: imagine how much more throttle Musquin would be able to apply in his photo versus what Jimmy would be able to apply. Marvin is in full attack mode, ready to explode through the turn. Jimmy is simply trying to navigate the corner and with his body weight out of whack, he won’t be able to accelerate aggressively at all. The difference on the stopwatch for this one turn might be minimal, but if that’s added up over an entire lap, big gains can be made. This is an extreme example for Jimmy and I am sure he had several solid passes through this turn, but more importantly, this illustrates how important body position can be for acceleration and cornering.