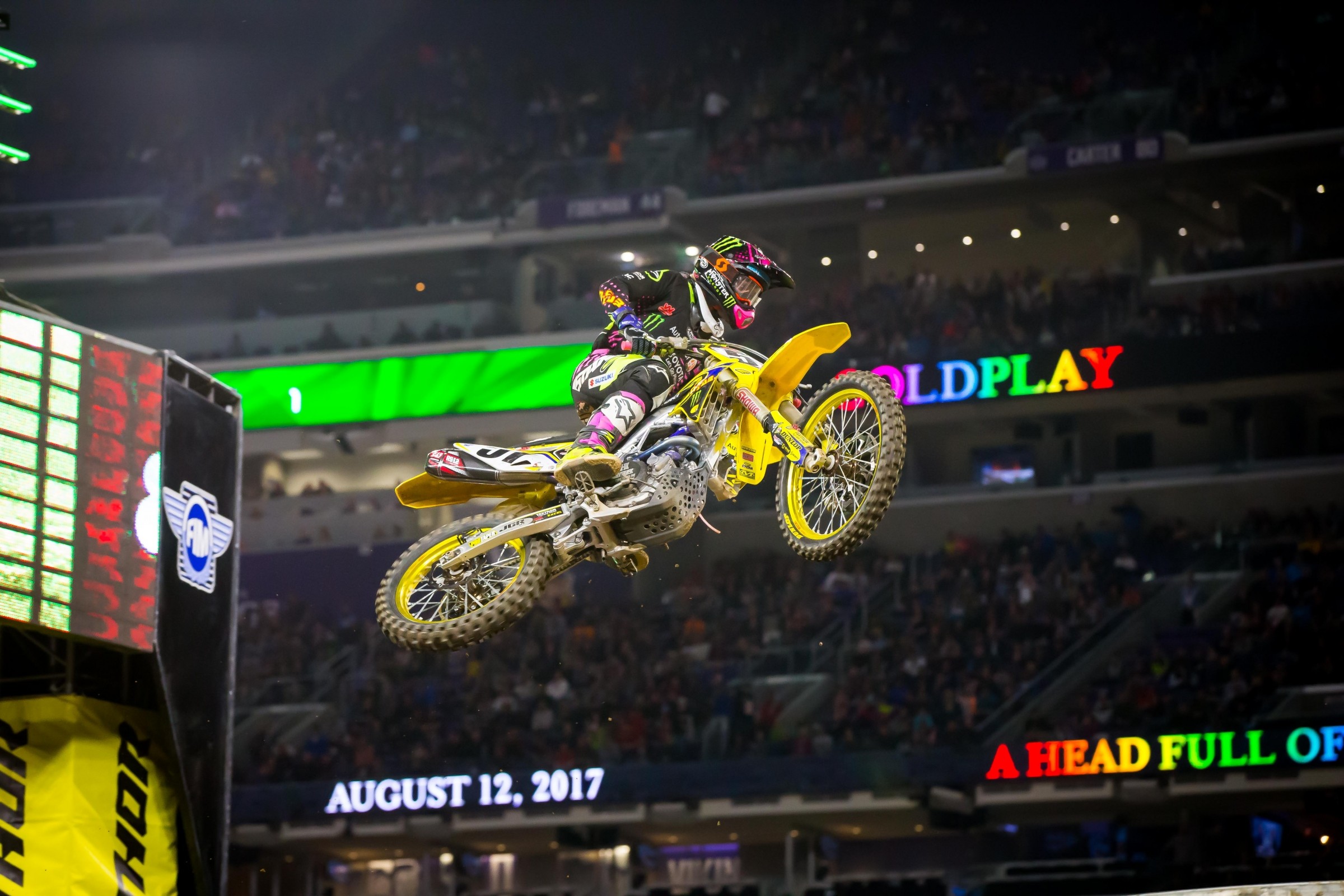 Rockstar Energy Husqvarna’s Jason Anderson backed up his first podium of the season last weekend in Minneapolis with a fourth-place finish. It was Anderson’s fifth top five of the season, and fourth top-four finish. “I’ve been pretty consistent lately,” he said in a team statement. “I pulled the holeshot and won my heat race, which was great. I was decently up front in the main and was able to come up to fourth. There wasn’t anyone behind me so I rode by myself pretty much the whole time. The track was pretty hammered."

Monster Energy Kawasaki was back to full strength on Saturday, as Josh Grant returned after missing the last two rounds due to a thumb injury. Despite two crashes, Grant said his return went well. “After taking a week off to heal a fractured thumb, I rode twice this week and felt nearly 100 percent,” he said in a team press release. “I started off the night well by qualifying straight out of my heat and backed it up with another great start in the main. Unfortunately, I went down twice and ended up 14th. Overall, a really good night to build off.”

Dean Wilson wasn’t able to follow-up his career-high fifth last weekend, as he went down early in the main and finished 12th, his worst finish since signing with Rockstar Energy Husqvarna prior to Oakland. “It was a decent night,” said Wilson. “I wish I had a better main event. I didn’t get the best of starts, then I collided with another rider and went down after the first turn. By the time I got going I was well behind last and just tried picking guys off. I got up to 12th, which isn’t amazing, but I qualified third which is a positive.”

RCH/Yoshimura Suzuki’s Broc Tickle has put together back-to-back top-seven finishes after a seventh in Minneapolis on Saturday. With that finish, Tickle is now tied with Chad Reed for ninth in points with 69 each. “We made some changes to the bike last week and that really paid off on Saturday night. The bike felt great,” Tickle said in a team press release. “I had to race my way through the semi to get in the main but everything still felt pretty good. Outside of the first 20 seconds, the main event was awesome. My start wasn’t as good as it should have been but I made some quick passes and got into a good flow. I was actually in good position to race for fifth or sixth, but I made a couple mistakes and lost some ground. That was good motivation to keep pushing forward. I’m looking forward to the rest of the season. We’ve had a little bit of a slow start but things are rolling in the right direction. We’re making progress every week.”

As we reported over the weekend, Justin Bogle is expected to race this weekend after leaving Saturday night early following a brutal crash in his semi race. Bogle visited the hospital as a precaution but everything checked out fine. “I came up short in that rhythm section, went over the bars, and that was the end of my night,” explained Bogle in a team statement. “We were having a good day and I felt good on the bike. I just missed my mark through that section and it bit me. I went to the hospital and everything checked out fine. I’m just sore. We’ll be ready for Atlanta on Saturday.”

Justin Barcia made his 2017 debut this weekend after missing the first six rounds of the series. The AutoTrader.com/Monster Energy/JGR Suzuki rider went down in the main and finished 17th.

Jake Weimer was expected to spend the week testing with the team in North Carolina, but he tweaked his back in the heat race on Saturday and said that he may be required to rest this week. “I came to North Carolina to test with the @jgrmx crew this week but it's looking more like a week of therapy to be ready for Atlanta. These things are so frustrating. I've dealt with it before and should be good for Atlanta.”

Colt Nichols, who broke his femur in November, was somehow able to lineup for the East Region opener in his debut for Yamalube/Star Racing Yamaha, and looked really good. Nichols was involved in an early crash with Dakota Alix and came from dead last to get 10th. Pretty incredible considering he broke his femur around three months ago. “Man it feels good to be back at the races,” he wrote on Instagram. “Regardless of the outcome I was just blessed to be there. Did not think any of this would be possible back in November. Lot of great people around me to make it possible and we’re going to keep working.”

As for Alix, well, the crash with Nichols after they started the race in second and third, was nuts. Luckily the privateer KTM rider was able to get away without injury after doing a helicopter move in mid-air. Take that, freestyle riders.

Basically sums up my night! Tough first race after a few weeks off the bike, but happy I was able to make it out healthy and ready for next weekend after this

Christian Craig was expected to be a contender for the win in Minneapolis. But he said he “fell apart mentally” in the main event on Saturday night. The race-winner from a year ago looked great all day—qualifying third and winning his heat race by a little over eight seconds—but went down in the first turn and had another crash trying to come through the pack. He finished outside the top-10 for the second straight year at the opener. “I got a horrible start and kind of fell apart mentally. I wasn't riding like myself and kept making stupid mistakes,” he said in a team statement. “I was able to work my way up to 12th after being almost last, but I should have been way more up there than that. Luckily, I got my bad race out of the way and can learn from it. I started in 17th last year at A1 so it's an improvement this year I guess!”

Kyle Peters, who is filling in for the injured Matt Bisceglia at AutoTrader.com/Monster Energy/JGR Suzuki, was involved in the first turn crash that took down Alex Martin, but managed to regroup and finish ninth. “Made it hard on myself this weekend by going down in the first turn both in the heat race and the main. Ready to put in the work for ATL,” he wrote on Instagram. Peters is expected to contest the first two rounds of the championship before heading to Australia where he is under contract for the 2017 season.

Rough weekend for Troy Lee Designs/Red Bull KTM’s Martin. In his debut race for the team, he had to qualify through the LCQ, got into the early crash with Peters, and went down once more and failed to finish the main event.

It was a good start to the season for former Star Racing Yamaha rider Anthony Rodriguez. After spending two years with Star Racing, and last year with Traders Racing, Rodriguez is on a privateer effort in 2017. Rodriguez ran top three on the opening two laps before eventually dropping back to seventh. He said on Instagram he got a little tight on the opening laps. “Rode a little tight in the first few laps and it cost me towards the end but overall happy with it. Work in progress.”

Luke Renzland finished eighth in his debut for Traders Racing Yamaha, beating his best finish of ninth from a season ago. “Feels really good to get the first one out of the way and get all the nerves out!” he said on Instagram. “P3 in the heat race after a strong start, and P8 in the main after another good start, but getting shuffled back a bit with the third turn pile up. There were some rough spots that I need to clean up, but I feel like I'm closer to the top than I have ever been.”

250SX veteran Kyle Cunningham, who is now riding for BLUE Buffalo/Slater Skins Yamaha, failed to make the main event in his debut with the team. Cunningham qualified 15th earlier in the day.

As we reported yesterday, Rocky Mountain ATV/MC-WPS-KTM’s Benny Bloss sustained a dislocated shoulder in the main event. At this time it’s unknown if he’ll miss this weekend in Atlanta.

Monster Energy Cup Amateur All-Star Champion Cameron McAdoo made his SX debut on a Smartop/MotoConcepts Honda, and looked solid for most of the main, hovering in the top 10. A late crash sent him back to 15th.

Nick Gaines, who missed all of the 2016 Monster Energy Supercross season due to a broken femur, fractured his clavicle on Saturday night, according to a Traders Racing Yamaha press release. He hopes to return at Daytona. "Minneapolis was going pretty good until I misjudged a jump in the second rhythm section," stated Gaines. "Unfortunately I fractured my clavicle, and I'm headed to surgery Wednesday to get it plated. I'm looking to be back at Daytona."