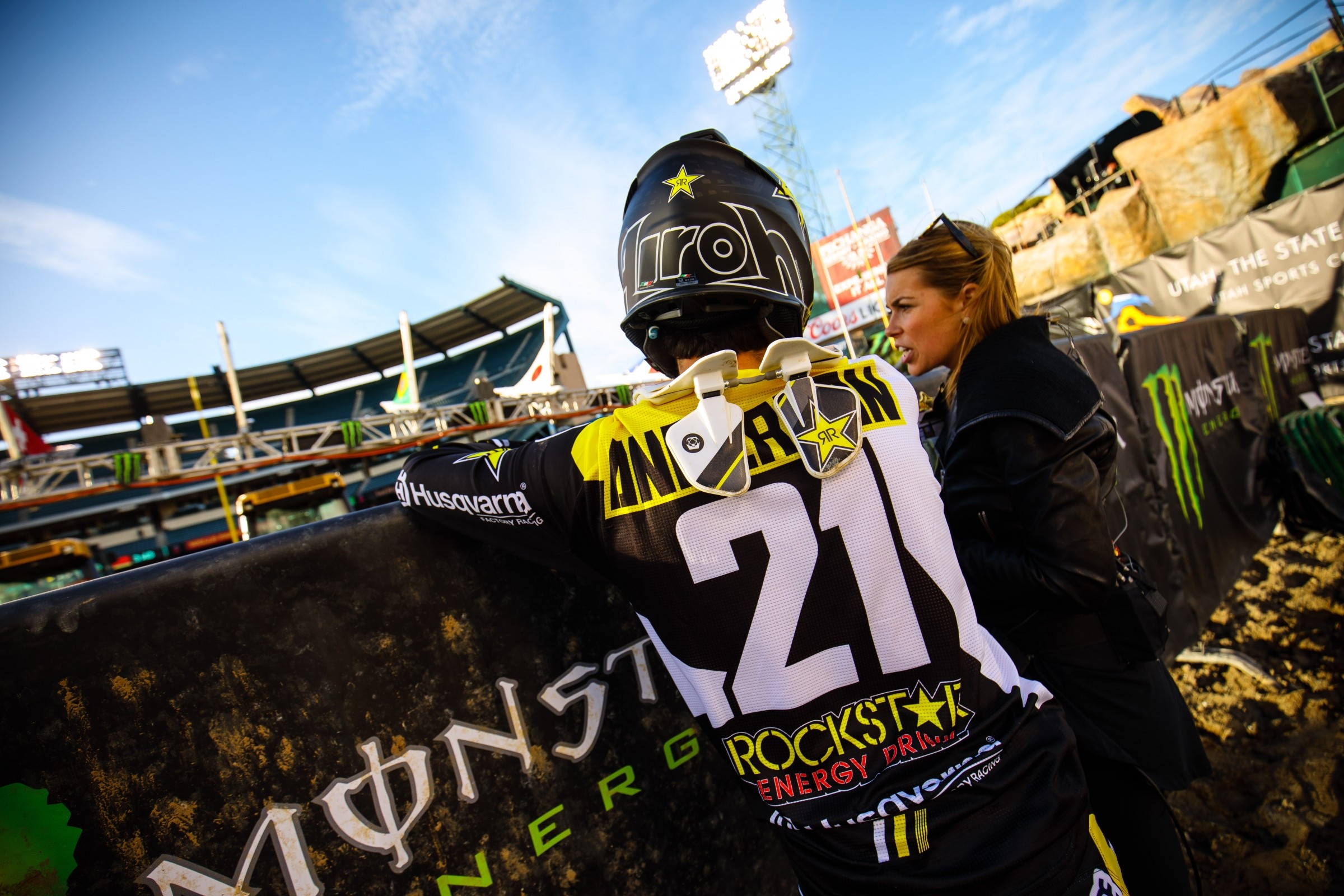 3 on 3 Questions After Anaheim 2

1. What happened in the Ken Roczen crash?

David Pingree: Ken is the only one who would really know and he may be scratching his head on this one too. Ken was carrying a ton of speed into that pocket between the two jumps and it’s possible he just got ahead of himself and rode too far forward as he pushed through the jump. But he hit the same line in previous laps and didn’t have a problem so I’m not sold on that theory. If you watch the video, you’ll see his right foot swing around to the left side of the bike. To me, that tells me his right foot lost contact with the footpeg as he pushed through the transition of the jump. With less pressure on the right peg he would have been thrown up and off to the left side of the bike like we saw. I suggest that his right heel scraped the ruts on the face of that jump and pulled his foot off the peg when he needed to be planted and pushing on the pegs. How it happened, honestly, is irrelevant. The real bummer here is the damage to the wrist and elbow joints. An open fracture (or compound, as some call it) can be a relatively straight forward fix with a short recovery time. However, when you incorporate dislocations to both adjacent joints the equation changes completely. Roczen will need multiple surgeries to correct the issues and he will have a long road to recovery in front of him. I wish Ken the absolute best in his healing and rehabilitation process.

Jason Thomas: With all of the rain falling on California, it's a miracle we haven't had three mud races in a row. Having said that, the rain does cause some issues. All of that water had been sitting in between the jumps and even though the track is covered, some leaks through and condensation causes the ground to soften. So, the jumps are rock hard and the base is soggy and soft. That causes a nasty transition where the soft base meets the harder jump face. That transition leads to unpredictable soft spots that can bite you. All day and night, there were close calls on that rhythm triple. Several privateers stepped through the bars during practice due to this same situation. For Kenny, he was in full attack mode and in that mindset, caution for soft spots becomes an afterthought. He was 100 percent concerned with getting around Cole Seely and going after Ryan Dungey, not concerned with that transition. That mode of thinking is why he was so far forward on takeoff and not in a neutral positioning like he would be if he was expecting trouble. That attack, forward position leaves a rider vulnerable if things go violently wrong. It's a catch-22 because that incredible pace demands full commitment (forward lean, irreverence to the soft take off) but it can also take a mistake and make it irreversible. Big crashes happen to every rider in the sport at some point. That's just physics and risk averaging out. Unfortunately for Kenny and the fans en masse, this one cost him a series.

It feels amazing to be spinning a bit. Not from the drugs but my legs. Closing all the cuts up and taking out some metal tomorrow for swelling and hopefully start preparing my arm piece by piece starting Friday. I can guarantee you that I will be doing everything to get that arm back close to perfect. Still have to wait to really know how long it is gonna take but I am young and strong. Nothing is impossible

Steve Matthes: The other two guys have already said what I would say, he went long on the landing, hit the soft transition, and it bucked him off. Everyone please stop saying it was because of the Honda and it's "buck" (is this something scientific?) or the shock was broken or aliens did it. It's a simple arithmetic: speed + weight + shock shaft speed + condition of dirt = a bad deal for the #94. My question is: what's next for Kenny and Honda? It seemed on Sunday that it was a compound break of the arm and perhaps an elbow issue and we talked about him coming back for outdoors. We've since learned from Kenny that there are dislocations involved and now all bets are off. We're just hoping he'll be ready for Anaheim 2018 and we'll have to see how this affects him and his career.

As far as Honda is concerned, they don't have an outside sponsor that demands they put someone on the bike so I don't think there's a big rush to do that. If anyone gets it, I would think it would be MotoConcept Racing’s Justin Brayton who they're working closely with in SX and then for MX, put Fredrik Noren on the bike that he's done well on before. Bingo, bango. Then again, it wouldn't surprise me to see them leave it vacant for SX and reassess for MX if there's a bigger fish to put on there. It is a brand new machine and Honda would want to promote it methinks. I literally just flip-flopped three times about what they're going to do. Stay tuned.

2. What happened in the Jason Anderson/Vince Friese incident?

Ping: I’m tired of arguing with people about this on Twitter. Friese got passed by Anderson in standard Anderson style. In the following turn, Vince ran straight to the inside of the corner with no plan of doing the jump out of the turn and when Jason turned down he plowed right into him. At best it was a stupid move by Friese and his history of making poor decisions on the track, for years, only exacerbates the issue. Of course I see the irony of Anderson getting mad about getting slammed when page one in his passing book is the exact same move. There is a difference though: Jason is typically moving forward and Vince is going backwards.

JT: Friese has a reputation in the pits for dirty riding. Whether or not he is deserving of that is an opinion for everyone to individually determine. Vince is also an incredibly good starter and puts himself in great spots to succeed. The problem is that as faster riders pass him, he likes to get aggressive. The faster riders don't appreciate that and when you’re known for dirty/aggressive riding, those faster riders have zero tolerance. So as Anderson went by, Vince decided he was going to go for a block pass coming out of that berm. Anderson cut down trying to pass Mookie and Vince was sitting in his exit line. It wasn't anywhere near as egregious as the moves that earned him his reputation, but when riders don't have any patience or tolerance for you specifically, the reaction is typically going to be negative. Because of Vince's reputation and prior offenses, Anderson lost his temper and did things he would later apologize for. This particular move wasn't that bad but his history of run-ins led to the overreaction. Riders reap what they sow and Vince is dealing with that concept anytime he steps out of line.

Matthes: This Friese/Anderson thing turned nasty on the Fly Racing Racer X Podcast with Weege and Ping, then it spilled over to the Pulpmx Show on Monday night with Weege, JT, and myself. It was worse than a Trump/Clinton debate. I was thinking about it today though and although it seems JT, Ping, and Weege are on one side and I'm on the other with Vince ... are we really?

We ALL agree that the move by Vince in the heat wasn't dirty. Poorly planned, sure. But it wasn’t dirty. We ALL agree that Anderson's move to punch/slap Friese multiple times after the checkers was dumb and I think we ALL agree that Anderson deserved to be DQ'd as the new-ish policy in SX is if you have physical contact with a rider off the track, you're done for the night. So what are are arguing about then? My contention is that move by Friese didn’t deserve the reaction it got and the FIM agreed with me. The other three think that because of past actions, they understand the reaction, but all I'm saying is if you're Anderson you have to play it smart and think to yourself about whether Vince's "move" on you is ACTUALLY DIRTY. Which this, we all agree, was not. If someone "cool" like Blake Baggett did this (and I've seen Blake pull moves that make me raise an eyebrow) OR MAYBE EVEN ANDERSON HIMSELF, then nothing is done.

That's all I've been saying and will continue to say. All the cool kids in the pits or in the TV booth like it when Vince gets punched or taken out by Kevin Windham or whatever, but I say look at the action itself and be the judge. I bet Anderson, Rockstar, and Husqvarna had wished he had done just that.

3. Can anyone stop Dungey?

Ping: No. See you at Hangtown.

JT: If everyone stays healthy from here on out, Dungey wins another title. He is unquestionably the best rider in the series now. The only rider he had any qualms about was Roczen and with Kenny's departure, the door is wide open. This answer sucks for the series but unless he gets injured or has multiple bike failures, this is all but over.

Matthes: I don't know. We're three rounds in and never did I think that the #94 and #1 would be so much better than everyone else. I guess I should've seen it coming based on past years, but I thought  this year might be the outlier. What in the hell is happening to Eli Tomac? Anyone know if aliens kidnapped him and can they please return him to Kawasaki ASAP? Marv has been close, but does anyone really think nice guy Musquin can beat Dungey enough?

Dungey will probably use outright speed to win most of the races from here on out and then be on the podium every single race to win another title. He'll do it in the same way that he's been doing it so far. Nothing exciting to the media or fans, just win baby. I think that like Jeff Stanton, his career won't be fully appreciated until he's gone and all of us look at the remarkable stats and go, "Huh ... will you look at that?"