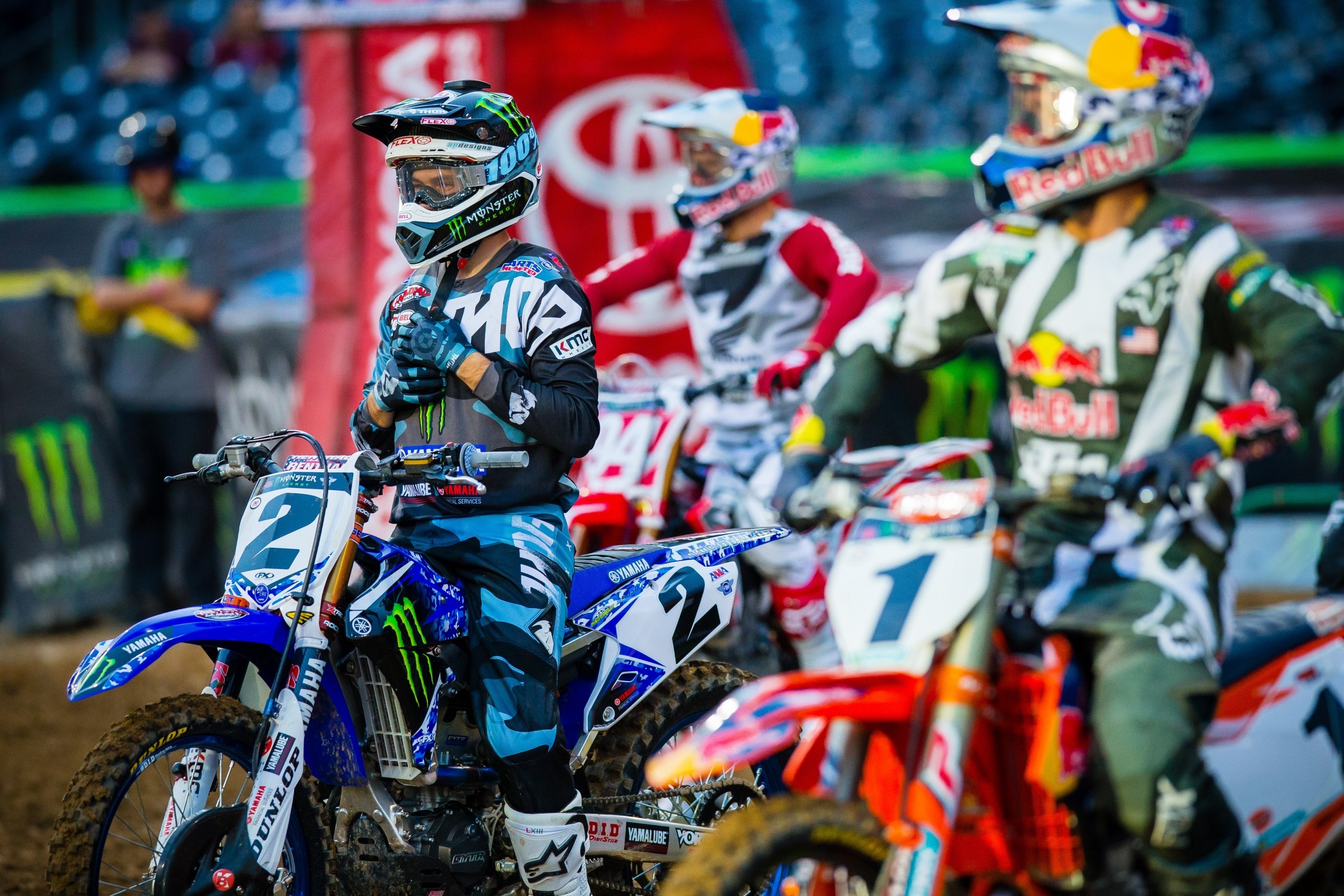 After a terrible start to his 450SX career, Cooper Webb finally looked like the two-time 250SX champion we’re accustomed to seeing. The rookie was good in qualifying (third), transferred to the main directly from his heat, and collected his first career top-five finish in the 450 class with a fourth in the main event. What clicked for Webb? We talked with him post-race to find out.

Racer X: How does it feel? It’s not the top step, but lots of progress this week.
Cooper Webb: Yeah, it was. It was quite nice to be up there all day. Even qualifying went really well for me. I was able to qualify third and I was up there for the majority of the practice. So I was stoked on that. Then made it out of the heat, so that was nice. In the main event I got a holeshot, which is pretty badass. I was able to ride pretty well. Obviously I tightened up but overall I was pretty stoked with being able to get a top five. My goal was a top eight, so fourth is half that, so that was pretty good.

What was it that clicked in a week? Can you put a finger on it or is the work you did during the week?
Yeah, I think I just kind of started doing what I know … just started being myself. There was a lot of pressure and there are a lot of things that go on in this sport. I just kind of relaxed and worried about myself this week. Just came in here with a whole new mindset, super relaxed, and actually had fun. So that was pretty nice to be able to see that translate to my riding and racing. Last week before San Diego we rode a sand track all week so it was kind of tough to … you feel good on that but then you show up at San Diego and you don’t even know what a supercross track is.

You said in the pre-season press conference that you kind of looked at this year as being your learning year. Sometimes the learning process is really frustrating. How frustrating was it early on?
Yeah, it sucked. Just seeing how much hard work we put in. Just me not being myself on race day was frustrating, but it’s part of it. It’s tough for anybody to, or even myself, know exactly how it’s going to be or what’s going to take place or anything like that. So I think it’s a tough transition, absolutely. Like I said, I’m just stoked. I had to take a step back and just kind of worry about making progress, whether it was little by little. Like you said, we made a pretty big step to the right direction. Obviously we have a long way to go, but it’s nice to see a bit of a good transition.

You knew that it was going to be tough, but what were your expectations of the talent level, the competition level in this class? Has it met that or exceeded it?
No, I knew coming in it was going to be very tough. There’s a bunch of guys. I knew it was going to be really, really hard. I think it was just my mentality was maybe not as good as it could have been. Really I just needed to work on all my areas. I didn’t have as good of an off-season as I would have really hoped, on and off the bike. At this level you can’t come in not at 100 percent. So I think that was the main thing, then mentally I just wasn’t 100 percent ready for it. I think it’s just all aspects of my game needed improvement and we’re getting there. It’s just nice to see it paying off. Even though it is one race I feel like myself again. So it gives me a lot of confidence. It’s a good feeling.

You looked like the Cooper Webb of last year.
Yeah, I felt like it. Obviously I’m still lacking a lot, but my speed was really good so I was stoked on that in practice. The heat race I made it from there so that was nice. I felt really good for the first couple laps of this main and just I guess tightened up and didn’t ride like myself. But like you said, there’s flashes and it gives me hope that I don’t totally suck.

Obviously with Kenny’s [Roczen] crash, there were some tricky spots out there.
Yeah. I actually really liked this track. It was pretty technical. It was tough to do the obstacles every lap, which I think is in a way a little better because it makes you hit your marks and it’s not about just seeing how fast you can go. You’ve got to know this is a sketchy section so you’ve got to use technique. Obviously it can bite you, as you saw, but I almost prefer the tracks being that way, just to where if you make all the obstacles every lap and make them clean that it’s going to be a good lap. I think that was maybe a little more how the old school tracks kind of were. I feel like tonight was a really good race track so far. I think it’s just those transitions. Like Ryan [Dungey] said with the rain it’s just tough to get them right. But I actually enjoyed the track. It sucks to see because he’s pushing so hard and all that. We all are, but at the same time you’ve got to kind of know what that line is. That’s part of racing.

Did the dropped practice session throw your day off?
No. I felt good. Normally it has been because I usually like a free practice, but I just got right in there in that first practice. Got right up there with the front guys and did my thing. I actually got held up pretty bad in the first one but I had some really good segment times. I felt like I could be on the board. I was pretty pumped until the last two laps I got bumped off. So that was a pretty cool feeling. Qualifying third was a huge improvement. I think I qualified 17th last weekend.

So what does that do to your confidence?
It’s good. It just upped everything. It gave me better gate picks, better everything. Made the mood better. So I’m stoked with everything.

Now that you’ve got three races under your belt, what is the difference between riding a 450 on a supercross track and racing one?
Yeah, I’m starting to learn it now. Everybody’s talked about it but you don’t know until you’re out there. That’s even what happened tonight. Once you start getting a little uncomfortable and make small mistakes, you naturally hold on tighter. It’s just so much more to push around. To ride at that intensity level and be out there scrubbing … and for me too with the tracks being a lot rougher, that was something that kind of threw me off guard a little bit. Our first lap would be equivalent to my last lap last year, so that’s the whole other thing too. I’m starting to get it and we’re learning what I can do with the bike, what I can do with myself, picking lines and stuff like that. Starting to figure it out, but obviously I can keep learning.